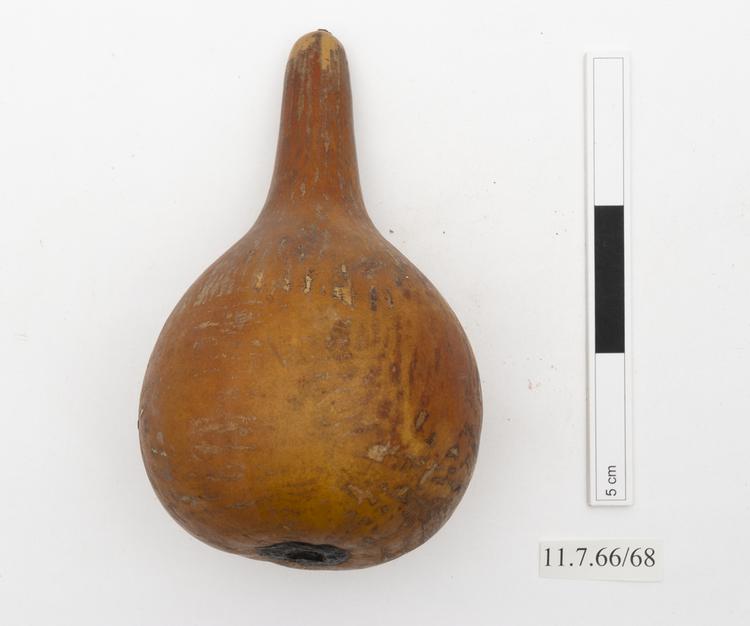 In the late 1950s the anthropologist James Woodburn carried out fieldwork among the Hadza living in the east and west of Lake Eyasi in Northern Tanzania. Woodburn made a collection, documenting over 100 specimens from the nomadic hunter-gatherers. The items fall loosely into three categories: possessions (relatively few and that can be carried from one camp to another); materials that could be used for trading with neighbouring groups; and items made from locally sourced raw material (wood for arrows or stone for stone pipes for example).

This rattle is made of gourd and rattles when shaken. It is used in connection with the Epeme Dance.

Each month on moonless nights the Hadza living in all but the smallest camps perform a sacred dance to which they attach a great deal of importance. They believe that the performing of the dance creates a state of well-being in which men will be successful in their hunting and in which the hazards of illness will be avoided. In many Hadza activities there is considerable stress on formal opposition between men and women but in this dance the emphasis is on harmony and reconciliation, on the interests that link men and women together […]. The dance is a solemn affair which continues for most of the night in absolute darkness. Men dance one at a time stamping with the right foot in time with the singing of women. The dancer wears an ostrich feather headdress (kembako) and shakes a gourd rattle (sengeno) as he dances. He wears bells (!ingiribe) tied round his ankles. He dances first in his own name and later in the names of his children and he may also dance for three types of object which he refers to as his children, the a’untenakwete, which are engraved gourds used to hold clarified animal fat, secondly the han!anakwete, stone or mud dolls which may be decorated with beads, and thirdly the naricanda which are incised sticks made by men for female initiates to use during the ceremonies associated with female circumcision. At these ceremonies the initiates use the sticks to beat and stab any man who does not run away as they approach. Each individual a’untenakwete gourd, han!anakwete doll and naricanda stick belongs to a woman and maybe named by her. […]