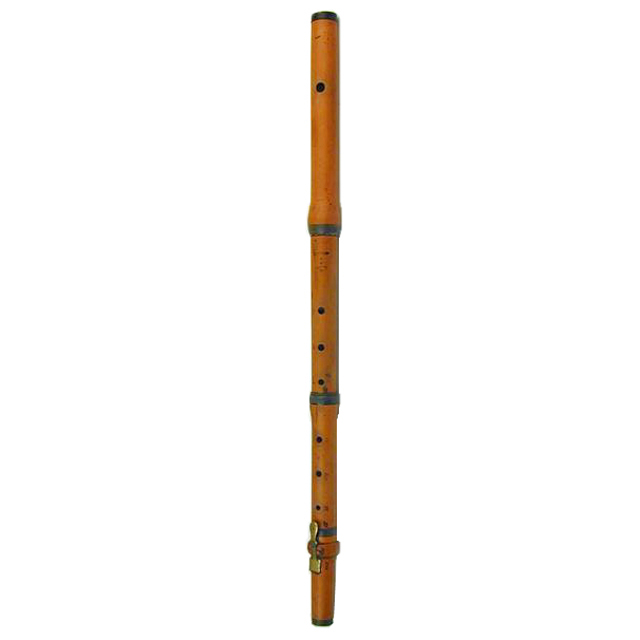 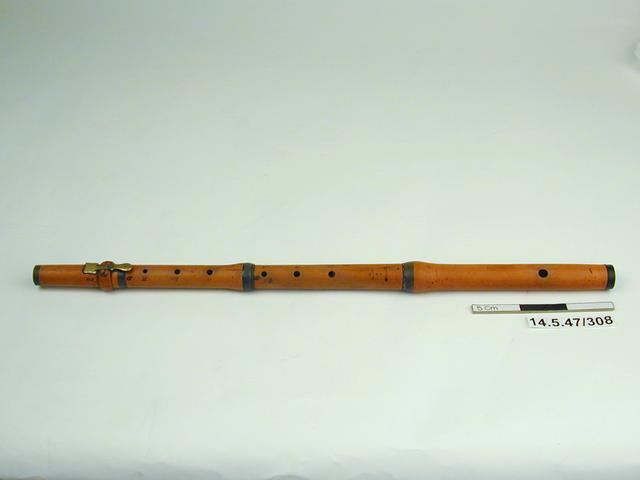 A conical flute in D. Made from boxwood with one brass key with flat, square flap, mounted in a turned ring. The instrument comprises four joints and is embellished with four horn ferrules and a horn crown on the headjoint. Instrument stamped: F. BOIE 2; with a fleur-de-lis maker's mark. The instrument has later been inscribed in ink with the name 'Quantz' at the top of the upper joint, and note names appear next to each hole signifying the effective speaking length.

In the mid 19th century, this flute belonged to the German composer and band master Carli Zoeller, who probably brought the instrument with him when he moved to London in 1873. In 1890, the year after Zoeller's death, the flute was displayed at the Royal Military Exhibition in Chelsea. The catalogue of the exhibition (compiled by Captain C.R. Day (London, 1890)) describes the flute as having belonged to Johann Quantz, flautist at the court of Frederick the Great, and describes how the instrument was donated to Zoeller by Quantz' great-nephew. In the early 20th century, the flute was owned by Canon Francis Galpin, probably the most famous instrument collector of his day. It appears in Galpin's Textbook of European Musical Instruments (London, 1937), where it is again described as having once belonged to Quantz. After Galpin's death in 1945, his collection was auctioned off, and the flute was bought by Adam Carse, who was also an important instrument collector as well as a teacher of composition at the Royal Academy of Music. In 1947, Carse donated his entire instrument collection to the Horniman Museum, and the flute has been on display there ever since. Since then, a number of scholars and specialists have studied the instrument and its past. Philip Bate carried out some restoration work on the instrument itself in 1972, adjusting the finger plate and re-padding the key cover. Research carried out by Pastor Günter Hart in the parish records in Göttingen revealed that the flute could not have belonged to Johann Quantz, as its maker was only nine years old at the time of the flautist's death (Glareana Jhg. 9, Nr. 1 (Zurich, 1960)). Hart also pointed out that the note names written next to the holes on the instrument would hardly have been required by Quantz, who in his day was considered one of the finest flautists in the world!