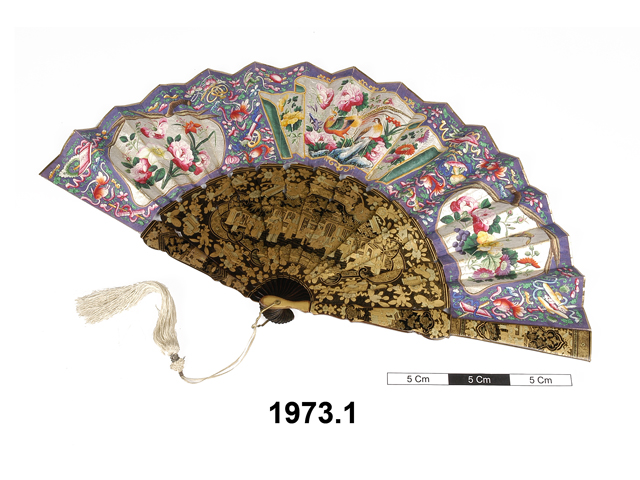 Folding fan with leaf made of painted paper, brown lacquered wooden slats and guards with two-coloured gold lacquer decoration; with an attached white silk tassel hanging from the bottom. The fan leaf shown on obverse is painted in water colours with three medallions surrounded by flowers against a blue background. Each medallion encloses a scene with Chinese figures in a garden setting. Each figure is applied in detail with a painted ivory face and glued silk fabric to represent clothing. The reverse is decorated with three medallions against a purple ground. The centre medallion depicts two peafowls amid flowers against a silver background, flanked by two peach-shaped medallions with flowers and butterfly against a silver background. Scattered around the rest of the leaf are gold fish, floral scrolls and some symbols from the Eight Daoist Immortals (castanets, sword, gourd, flute and flower basket), from the eight symbols of a scholar (book, scroll, 'qin') and from the Eight Jewels (ruyi sceptre and coin). The fan when unfolded shows the slats densely decorated with a large fan-shaped medallion at centre depicting Chinese figures in garden setting with pavilions. Surrounding the medallion are many auspicious symbols such as coin, gourd, book, scroll, flute, pomegranate and flowers against a dotted background. The guards are decorated with two medallions depicting Chinese figures in garden scene, surrounded by flowers, butterfly, gourd and fan motifs.