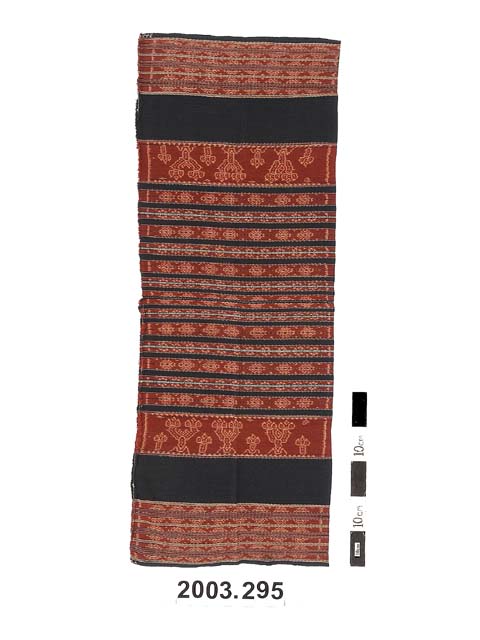 A woman's skirt made from cotton and dyed with vegetable dyes. The textile's maker is Ina Huri Hegi, a descendant of Tenga Bengu of Kujiratu. The cloth is made in two sections and sewn together at one selvedge; one section is the mirror image of the other. The fabric is mainly warp-faced ikat. The patterning is described as it was woven (as stripes) rather than as worn (as bands). There are two solid blue stripes and the main ikat stripe comprises undyed warp ends on a red ground. The motif, called 'leba' means 'crown' in analogy to a similar motif of wini Ga. There is a set of narrower stripes with ikat motifs at either end of each section. The one closest to the join contains narrow black and white patterned stripes, known as 'raja'. The 'raja' stripes are created using a floating warp. The dyes used are indigo (blue-black) and Morinda citrifolia (red).