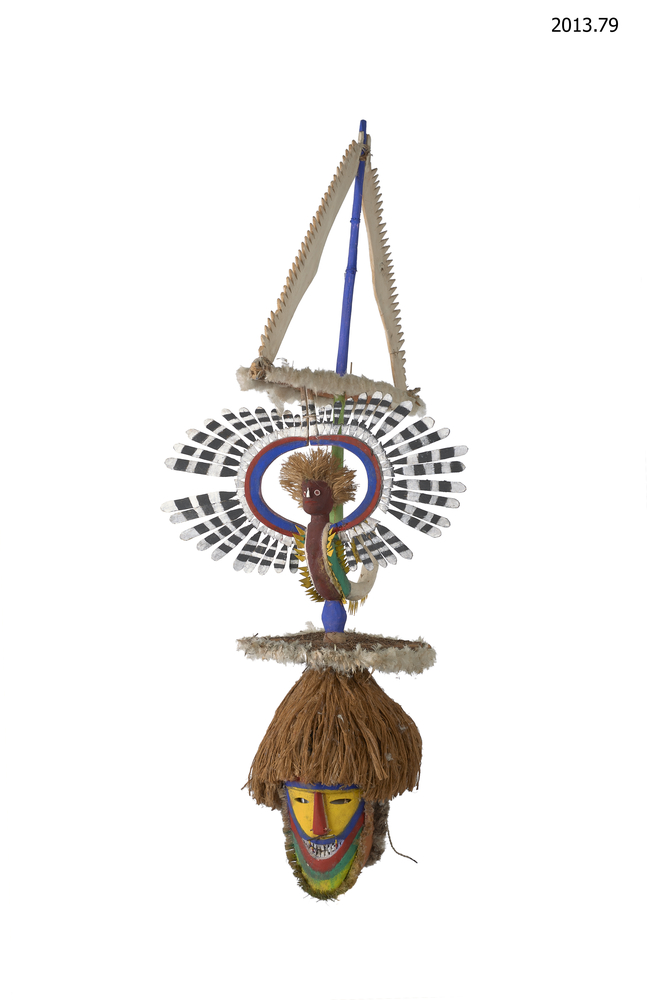 Spirit dance mask comprising a wooden anthropomorphic mask painted in yellow, red, blue, and green with a beard and hair of coconut fibre cordage. A tall shaft protrudes from the top of this mask, painted green and blue, with a large triangular construction resembling a boat at the top. The horizontal lower side of this triangle is fringed all around with white feathers. Beneath this triangular structure is a supernatural being with a spirally curved tail, a human head with hair of coconut fibre and bird-like wings forming a circle, with individual flight feathers made from teardrop-shaped fillets of wood. This creature is painted purple on its head and breast, green on its sides, and white on its tail, while the feathers are striped in black and white.

Spirit Mask, Alor, Tolai People, Gazelle Peninsula, New Britain, Papua New Guinea. The brightly coloured masks of the Tolai people who live on New Britain are often overshadowed in books on Pacific art by the enormous masks of their Baining neighbours, but these alor, as they are known, are quite remarkable. In the Kuanua language, Alor means ‘skull’, and the mask represents a deceased spirit, hence its permanent smile. The Tolai understand Alor spirits to be capable of both helping and hindering humanity, depending very much upon the respect we show them. Alor masks were associated with the Iniet initiation society. Within the rites of Iniet, powerful tabalivana spirits were called into the human world by providing them a specially selected flat stone (called a palawot) to temporarily inhabit. The Alor mask was a special, active kind of palawot. No two Alor are exactly the same, and one of the marks of a Tolai ‘Big Man’ (a wealthy, influential and charismatic individual) was to have an Alor spirit, and a mask design, revealed to him in his dreams. Sadly, the public dancing of the Alor was already a rare sight when it was first described by German anthropologists in the late 19th Century, and its performance has been very rare in recent decades. Wood, pigment, feather. Early 21st Century. Collected in New Britain by Mr Kevin Conru, and sold by him to the Horniman Museum in 2001.