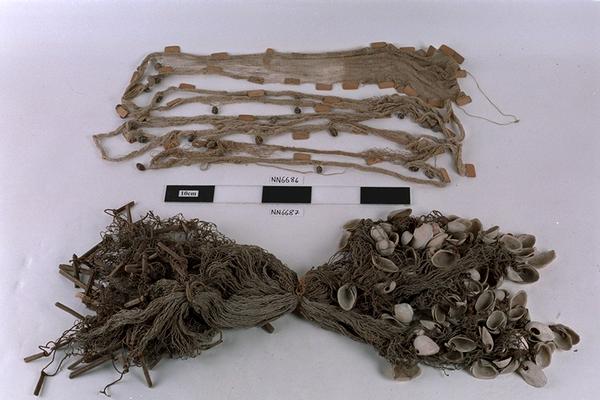 Small Fishing Net, Ubir People, Oyan Village, Collingwood Bay, Papua New Guinea. It is unusual in early museum collections from New Guinea to have the precise date and location of an object’s manufacture recorded, but the Rev. A. K. Chignell has done us a great service here. He acquired this little fishing net at the village of Oyan, where he stopped on 13 January 1909, and spoke to a man who was working on his fishing nets there on the beach. Chignell bought this net, alongside an excellent and complete set of the Ubir fisherman’s net-making tools. The net is round and small enough for one man to set it and draw it in. Around the edge are tied on little rectangular fillets of bamboo which act as floats for the net’s upper points, and pierced clam-shells which act as sinkers to weigh its lower points down in the water. Vegetable fibre, bamboo, shell. Early 20th Century. Sold to the Horniman Museum in 1909 by the Rev. A. K. Chignell.