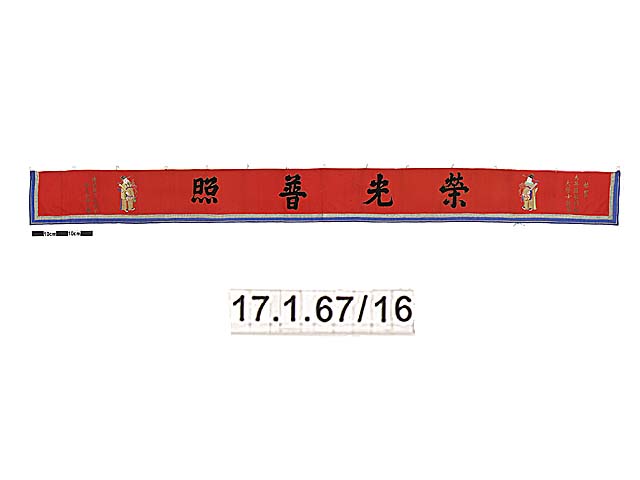 Long red wool banner with four large Chinese characters 'Rong Guang Pu Zhao ' in the centre, realised in applied black velvet and edged with a double row of couched gold-coloured metal-wrapped thread. On either side of the text two of the Eight Daoist Immortals are depicted. There are 13 Chinese characters painted in gold-coloured paint to the right of the figure. In the second row (reading across) are the words 'Great Britain'. The row below that says 'John', and below that 'Great Doctor'. In the fourth row down, depicted in two characters, is only the word 'Luo', which may be similar to John's surname. There are 13 characters towards the left hand border. There is a green, blue and metal-wrapped thread band along the bottom and sides of the red satin ground and attached is a solid satin blue strip with another much smaller band.

Doctors Lyal and Kiercross - Medical Missionaries. In January 1967, Mr P. A. R. Brown, a descendant of one of the missionaries donated a collection of 21 items to the Museum. The collection consists mainly of clothing, but also includes five banners, an altar frontal, an umbrella and a picnic basket. No documentation was received about the collection, but the Museum archive records that the objects were brought back from Fukien, now Fujian, province by two Presbyterian medical missionaries, Doctors Lyal and Kiercross who acquired them around 1902. A Dr Alexander Lyall, spelt with two 'l's, has been identified from the records of the English Presbyterian Mission. He became head of the Presbyterian Gospel Hospital in Swatow, in neighbouring Kwantung, now Guangdong, province, in 1879, aged 25. Dispensing medical help was used by the Protestant missionary societies as a tool of evangelism amongst the poor. Dr Lyall is described as a 'yi shi' on the gift textiles, indicating that he had the practical skills of a 'hereditary physician', a lower status than that of the 'Confucian physicians' or 'ruyi'. These textiles refer to the Doctor as John, not Alexander, which may have been an additional Christian name, or the name by which he was known locally. Dr Lyall married an American Baptist in London in 1886. After her marriage Amelia Lyall taught at the school which had been built in the hospital grounds and also started to teach embroidery to a group of Christian Chinese women which developed into a small business. Dr Lyall retired in 1926 and returned to Scotland. He had spent 47 years of service as a medical missionary in the largest mission hospital in China. Nothing is known of Dr Kiercross.