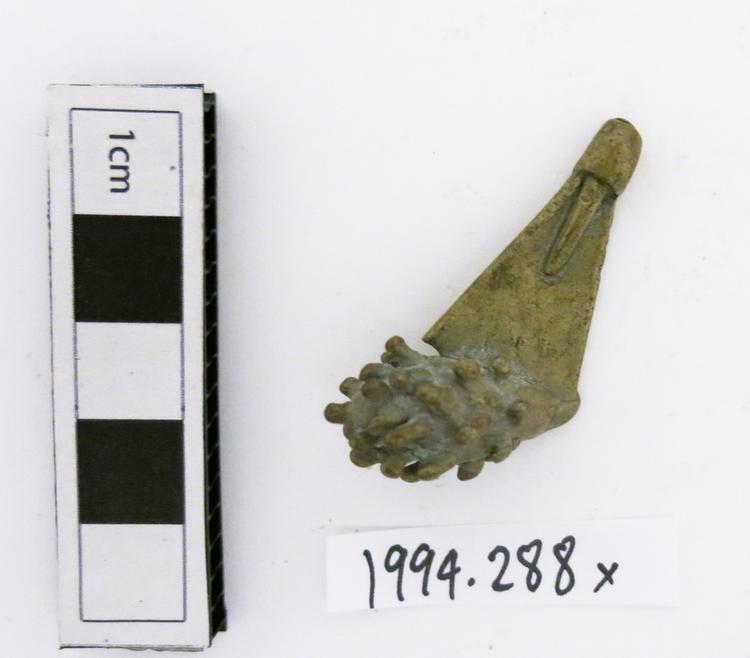 Brass gold weight representing an axe inserted into a fruit or similar.

Brass weights, such as this example, were used to measure gold dust across Islamic West Africa. Gold dust was a form of currency, used predominantly by Akan speaking people from the 14th century to 1900, when the practice was banned by the British Government in Ghana in an attempt to standardise trade using a monetary system. Once they were banned, they flooded the European art market, purchased and brought back by European traders. Such weights would have been made by goldsmiths using the â€˜lost waxâ€™ technique, where a shape is carved or molded out of wax before being dipped in several layers of clay slip. Once the slip has dried, molten brass is poured into the mould, replacing the wax by melting it. These weights would often initially have been commissioned by an individual, and then passed down the matrilineal line through inheritance. As trade in gold dust was predominantly an activity reserved for men, an individual would inherit the weights passed down through his motherâ€™s brother. It was said that a personâ€™s soul inhabited the things they used, and thus a collection of inherited weights might be understood to be an assemblage of highly spiritual and personal objects, representing ones ancestors. Such weights often tell a story, representing items of prestige, or characters from popular stories or proverbs.