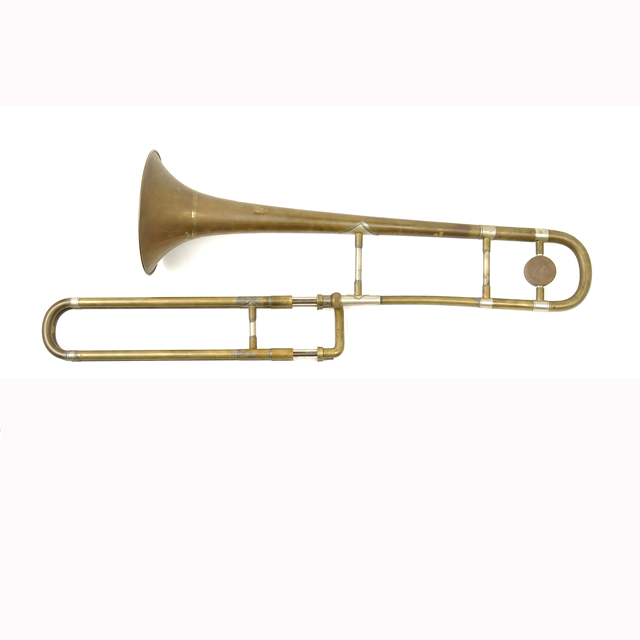 Tenor trombone. Brass tubing with nickel silver ferrules and inner slides. Double-slide model with two parallel shortened slides. Bell section of traditional design with three stays, one of which is on the tuning slide and has a counter weight fitted. Mouthpiece missing.

This experimental trombone is at the same pitch as a standard tenor trombone but has a double slide, meaning that the slides need only move half the distance to achieve the same range of pitches. Eric McGavin, the curator of the museum at the Boosey & Hawkes factory in the mid 20th century, was also in charge of the company's education projects. He was interested in developing instruments that could be played by children and by people with physical disabilities. This trombone may well have been a prototype for one of these projects. In recent years, the Yamaha Company has developed an alternative solution to the problem of young players being unable to reach the lowest positions. Their YSL-350C model trombone is shorter than the standard instrument, but has an ascending valve with a whole tone loop. This means that the air travels through the valve loop by default but is bypassed when the valve is activated. This allows alternative positions to be used in place of the traditional sixth and seventh at the bottom of the slide.