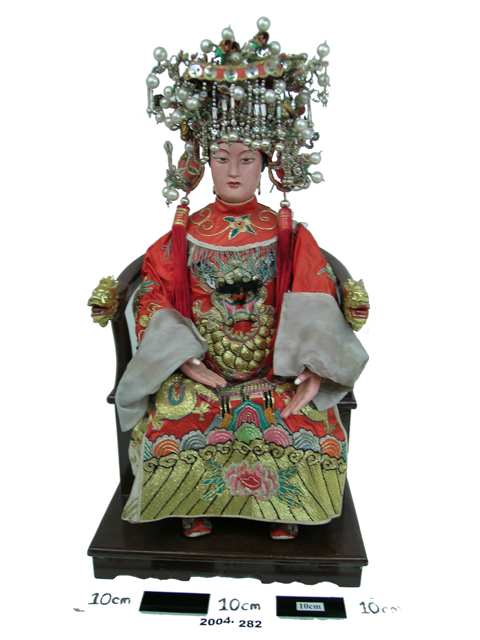 Carved and painted figure of female deity, probably the Taoist goddess 天后聖母 ‘Tian Hou Sheng Mu’, the Queen (or Empress) of Heaven, with headdress and throne. The figure is clothed in red silk robes ornately embroidered with gold dragons and dragon robe symbols. The figure has red silk boots embroidered with flowers. The wrists are jointed. The elaborate headdress for figure of deity is made from cardboard, covered in red silk and decorated with strings of metal and plastic beads, large and small fake pearls, sequins and 2 red tassels. The top half has painted metal dragons on springs each sprouting 2 large imitation pearls. The throne is made out of wood and is painted in brown and the arms terminate in gold dragon heads.

Comment from Wu Ni Yen (2015): Judging from her appearance, the figure is likely to be the Taoist goddess å¤©å�Žè�–æ¯� â€˜Tian Hou Sheng Muâ€™, which refers to â€˜the Queen (or Empress) of Heavenâ€™, and is also well-known as åª½ç¥– â€˜Mazuâ€™ (which literally means â€˜mother-ancestorâ€™). She is the goddess of sea who is said to protect fishermen and sailors, and later known as the goddess of journey (both in life or travels). She is widely worshiped in the coastal regions of China, especially in Zhejiang, Fujian, Guangdong, and Hainan. Mazu is also popular in Taiwan (about 1000 temples dedicated to Mazu) and other places in Southeast Asia where the cultures strongly link to the sea. Mazu is usually shown sitting on a throne between two guardian generals known as â€˜Thousand Miles eyeâ€™ (in Chinese: å�ƒé‡Œçœ¼, â€˜Qianli Yanâ€™) and â€˜With-the-wind Earâ€™ (in Chinese: é †é¢¨è€³, â€˜Shunfeng Erâ€™). She is usually clothed in a red jewel-festooned robe of an empress, wearing flat-topped imperial cap (headdress) with hanging beads at the front and back. According to legend, Mazu was born In the Song dynasty. When she was born she did not cry, so she was thereafter named æž—é»˜å¨˜ â€˜Lin Moniangâ€™ which means â€˜silent girlâ€™. She had a mysterious ability to predict weather and often she warned others to not make journeys to the sea. She died at 28 when rescuing shipwreck victims. The Mazu belief has been spread all over the world by the seafaring Chinese. Believers now reach the amount of 200 million people in over 20 countries and had become an important cultural identity for Chinese population worldwide. She is celebrated twice a year in numerous Mazu temples. On that particular day, believers will suspend their work to attend dance and performance festival, and implore Mazu for all the good wishes they have, such as safety, pregnancy, fortune, health, success, etc.