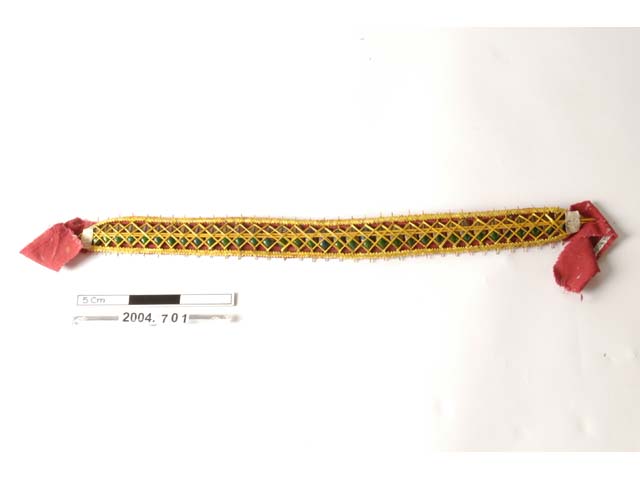 Length of strap possibly circlet or belt made from a strip of red cotton with unfinished edges onto which is secured yellow plant fibre that holds in place 35 green and bronzed beetles. The back of the strap is criss-crossed with clear plastic.

Green Beetle Headband, Wahgi People, Highlands Province, Papua New Guinea Although New Guinea is rich in mineral wealth, the peoples of the island have traditionally relied on plant and animal sources for bright colours and brilliant lustres to adorn and beautify themselves, particularly feathers and shells. One of the most remarkable examples of this is the Wahgi use of Coleoptera (beetles) as jewels. In this headband, several beetles have been de-legged and impaled lengthways on little wooden splints. These splints are then sewn onto a backing strip of imported red webbing, and overlaid with an attractive lattice of securing strips. The overall impression created from the marked contrast of green and red is striking. In recent years, Wahgi men have become world famous for their amazingly colourful and complex self-presentation on ceremonial occasions, and this headband would have played only a small part in such a costume; it would have been worn in conjunction with tall plumes of cassowary and bird-of-paradise feathers, lustrous pearlshells, and a complete coverage of multicoloured body paint and beard dyes. Beetles, cotton fabric, wood, vegetable fibre. Late 20th Century. Collected by Lesley Oakley and purchased by the Horniman Museum in 2004.