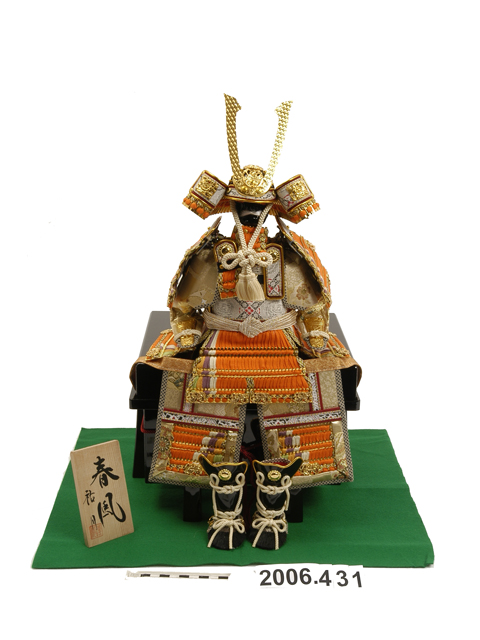 Samurai armour set, also known as gogatsu ningyo. The set consists of a helmet, known as a kabuto, with a gold crest called a kuwagata. There is a lower face guard, also known as a mempo. The body armour consists of arm guards known as kote, shoulder guards called o-sode and skirt panels which are kusazuri. The shoulder panels are placed at the front, back and side. The armour has chiefly orange lacings but some sections are in white, mauve, beige and green. There is an apron, known as a haidate, to the front. The apron is in the form of two panels with orange lacing and some white, mauve, beige and green with a silk border and waist straps. The set also has black shin guards, known as suneate, and shoes called kegutsu, with cream silk cords and gold detailing. The armour is set on a wooden stand, which is lacquered in black, and also has a wooden sign which is placed at the side, and is inscribed with Japanese characters reading 'Spring Wind'.