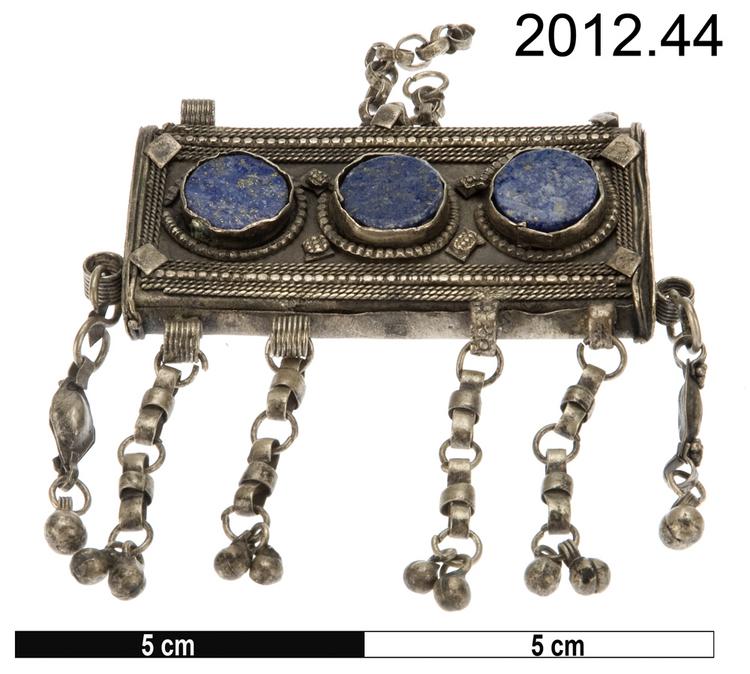 Pendant amulet from Palmyra, Syria. Hollow rectangular white metal amulet, inset with three dark blue round gemstones, with six white metal pendant chains. Constructed as a thin case, though it does not open. Of the two flat surfaces, one is decorated, the other lies against the chest of the wearer. On the decorated surface, a border of three rows of twisted wire on the short sides, and six rows of twisted wire on the long sides. Flat white metal diamonds placed over the twisted wire in each corner. Three blue, gold-flecked gemstones, possibly lapis lazuli, are set in white metal. The central gemstone is surrounded by four small floral designs in white metal. Four thick pendant chains hang from the bottom edge of the amulet, each with two white metal balls at the end. One pendant hangs from the lower part of each side edge, with a single white metal ball at the end. A pendant chain is attached at the middle to the uppermost edge of the amulet. Two white metal loops on the top edge of the amulet through which a chain could be inserted.