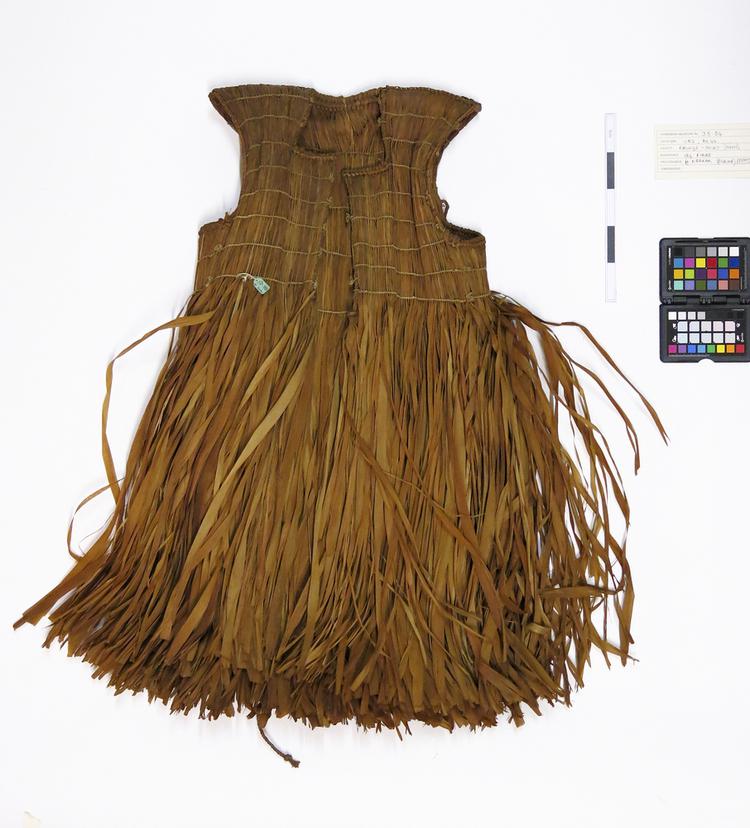 Leaf raincoat, worn by men and women. Chahnang. Garment that reaches from the shoulders to the knees. Made of strips of leaf, that are shaped and tied closely over the shoulders to form a short `waistcoat’ with the long ends of the strips hanging down loose. The strips are bunched together and tied near the top with eight spaced lines of twisted cotton. The arm holes, top and open front sides are strengthened with overlaid, twisted leaf fibre.

Lakher is the name given to the people by outsiders: they are known to themselves as the Mara (see N.E.Parry 1932 The Lakhers London: Macmillan). This type of raincoat described in N.E.Parry 1932 The Lakhers London: Macmillan p 109 (construction), also p 39 (reference to womenâ€™s use). This type of raincoat called Chahnang by Lakher (Mara) people, and made of a grass called chahnang (see N.E.Parry 1932 The Lakhers London: Macmillan p 109, also p 39). See photograph of this type of raincoat being worn, taken in 1908-20, in Fraser, D.W. & Fraser, B.G. 2005 Mantles of Merit: Chin textiles from Myanmar, India and Bangladesh Bangkok: River Books, p104. This collection bought from Mr Lorrain â€“ probably Rev. R.A.Lorrain who set up the Lakher Pioneer Mission with his wife Maud in 1907. The mission was supported by Lorrainâ€™s home church in Penge. The mission is now the Mara Independent Evangelical Church.