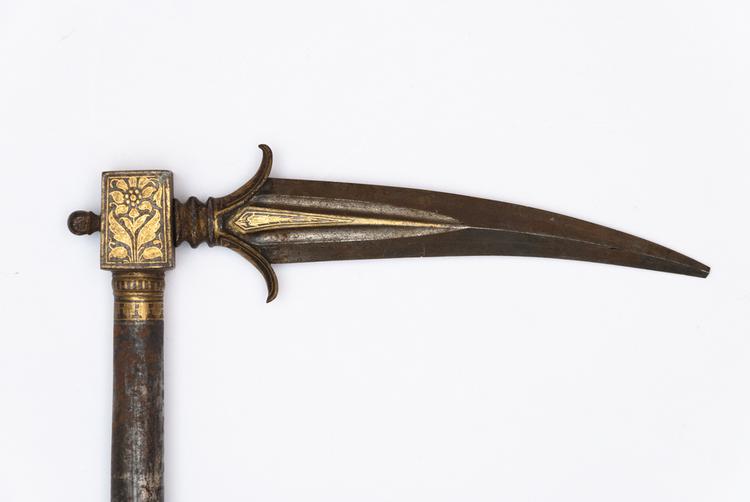 Indian war hammer zaghnal, of all steel construction, the thick square-section tapered head is heavy and drawn to a point, and emanates from a divided root and a baluster. The cylindrical steel shaft has a bud-shaped finial and a rectangular top through which the head is secured by a small turned screw. The zaghnal is decorated with gold koftgari ornament involving geometric designs and flowers. 19th century.

This highly efficient weapon has an ancient lineage, and its equivalent in Europe was known as a war hammer. A manuscript made for the Mughal Emperor Akbar in 1589 called the Ain-I Akbari, by Abu’l Faisal, illustrates just such a zaghnal (right hand page, bottom line, 3rd from left). In the same manuscript can clearly be seen the daggers from which the blade and root of our particular weapon derives (right hand page, second line, middle and right hand examples). This copy of the Ain is in the British Library (OR 2169 57R and 57v) and was painted c.1625. It is unclear if the Horniman zaghnal is Hindu or Muslim, but in any event it was probably manufactured for a decorative market well into the time when mass-produced firearms had made its use redundant.