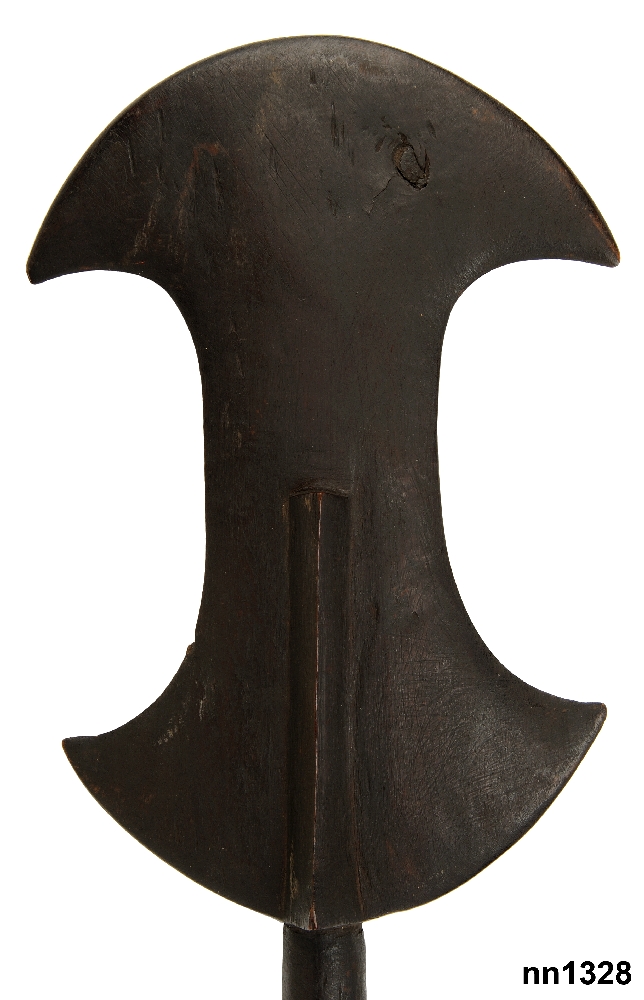 Spade like club, from Vanuatu, with a cylindrical shaft and a flattened wooden head carved into two opposing crescents and terminating in a broad arc. A triangular prism ridge runs down the lower half of each face as an abstracted nose feature. At the butt a flattened hemispherical dome opposes an elongated conical pommel. Dark hardwood.

Double-Crescent War Club, Possibly from Tanna, Vanuatu, Eastern Melanesia Although many of Vanuatu’s huge diversity of war club styles have been traced to particular islands in the archipelago, the men of each island valued the exotic styles of clubs from other islands, and so there was much trading of weapons between different places. This has made it difficult for students of Vanuatu carving to track each style down to a particular place, and this type with a double-crescent blade is a good example of that. This was certainly a style that was popular on Tanna in southern Vanuatu, although it was also found sporadically further north. The design is visually pleasant and balances curved and straight lines in a way that Vanuatu club carvers excelled at. It is also very practical, however, and provided the warrior with two spurs on each side of the blade with which to land a blow. Hardwood. Late 19th century. Provenance unknown.