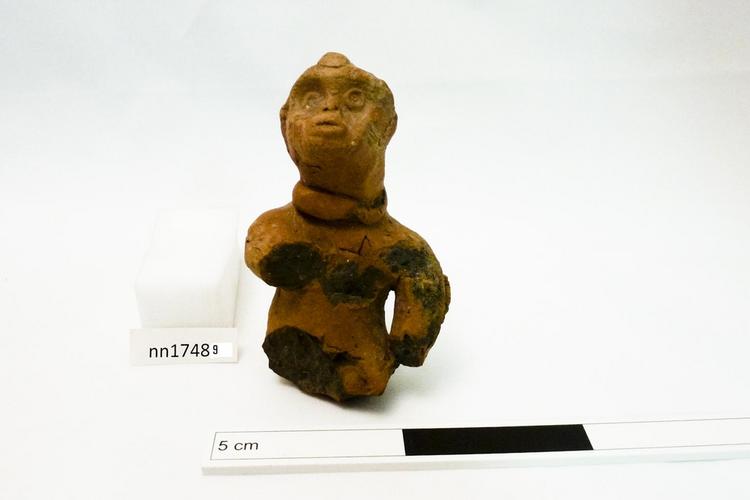 Gandharan terracotta figure of a partial human figure, which is missing the legs and hands.

Legless torso of a humanoid, almost ‘monkey’-faced figurine, made in coarse red terracotta with a dark grey core, lacking any gender definition indications and with an unworked back. The right arm is lost and the left preserved to the elbow. It might be just possible to imagine that the hands of the figure were, in its unbroken state, raised in Añjali Mudrā (the worship pose). The figure has a thick plain necklace and a small knob on the top of its head, rather like the topknot, protuberance or ushnisha traditionally on the top of the head of the Buddha and an indication of great wisdom, or here just a part of the coiffure. The face is dominated by wide eye sockets with circular eyes with raised rims, a wide nose and appliqué mouth, slightly open (see Agrawala, 1936). Archaeological context: presumably unstratified and from a surface collection. Marked on the back with ‘Muttra’ (ie Mathura, the great ancient imperial capital city site, 50km north of Agra, in Mathura District, Uttar Pradesh, India). Early Historic Period, late centuries BCE to early CE. Given by: Col D H Gordon (1952/3).