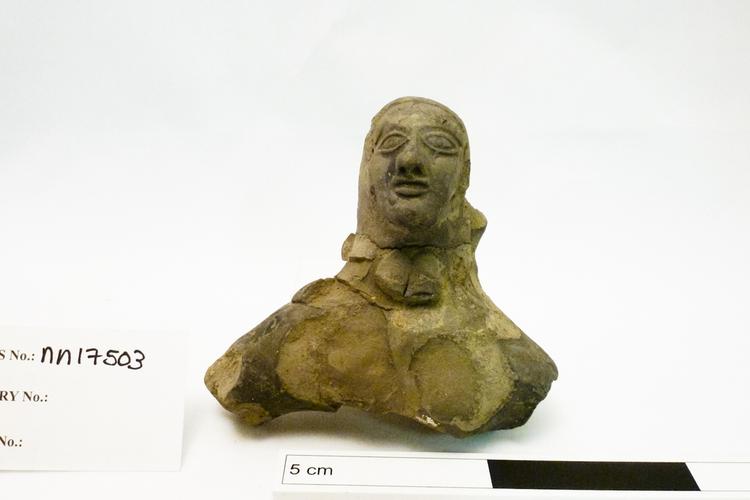 Terracotta top half of a figure with a well defined face and a feature around the neck.

Head and shoulders from a human female figurine in hard grey terracotta, now much damaged and with most of its diagnostic features missing: headdress, heavy neck ornaments, breasts, coiffure (save for two decorative plaits at the back, decorated with punched flowers). Their eyes protrude somewhat, each surrounded by a lenticular appliqué rim, the nose is prominent and well-modelled, as is the mouth. The arms are lost from just below the shoulders and the rest of the body is gone too. See above bottom, for an image of two such grey, better prerserved terracotta females from Mathura (see Knox, 1982), each of which retains much of their elaborate costuming and personal adornment. This style of female figurine precedes the Sar Dheri range from the northwest by a couple of centuries or more. The use to which this type of image was put (probably votive) may not differ radically from the north-western types and, for all anyone can say, they may be both of identical deities or nature spirits, each bearing the same names. Marked on the back in black ink with ‘Muttra’, Mathura, a great ancient Early Historic Period city, about 50 km north of Agra, with a long and distinguished history as a capital city of a major mahājanapada, ruled by the Surasena dynasty from the 6th century, through the Mauryans, the Śuṇgas, Indo-Greeks and Kuṣāṇs (Kushans). Archaeological context: presumably unstratified and from a surface collection. Early Historic Period, probably 3rd century BCE. Given by Col D H Gordon (1952/3).