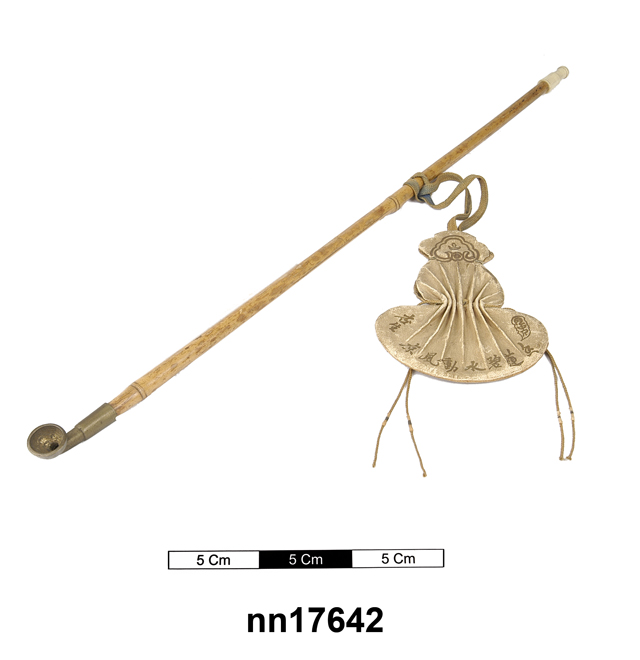 Tobacco pouch attached to the pipe stem via a plaited cord. The bag is made of leather with a drawstring in the centre that has created pleats. There is a ruyi motif at the top of the bag and an inscription below in the form of a poem. It can be read from both sides with different meanings, but both are describing beautiful scenes. From left to the right, it reads 涼風動水碧蓮香 ’liang feng dong shui bi lian xiang’, which means ‘cool breeze, flowing water, with fragrance of blue-green lotus’. As for right to the left, it reads 香蓮碧水動風涼 ‘xiang lian bi shui dong feng liang’, meaning ‘fragrant lotus, blue-green water, and a breeze (makes me feel) cool’. This poem was composed by a famous, talented female poet Zhuo Wenjun (in Chinese: 卓文君, B.C. 179-117) in the Han Dynasty. The two characters in the left column are 杏生’xing sheng’, probably the name of the person who inscribed the calligraphy on the bag. There is also an inscription of a stamp at the right hand side. The characters are in seal script, also known as a decorative engraving script. The three characters from top to the bottom are 月 (moon), 中 (inside), 人 (person), which in combination probably means ‘the person inside the moon’. In a poem composed by a man, this might be a metaphor (for rhetorical effect) referring to the girl he likes. However, here it is probably the name or company of the maker.

Female poets were rare in ancient Chinese society, since females did not have an equal right to education with males. There is a well-known old saying thatå¥³å­�ç„¡æ‰�ä¾¿æ˜¯å¾·, which means â€˜Inability constitutes the very virtue of a womanâ€™. Therefore, educated females such as Zhuo Wenjun were usually from a noble or wealthy family. She is famous because of her outstanding talent for playing Chinese instruments and creating beautiful poems, and because her husband was also a well-known poet in the Han dynasty. Wu Ni Yen, February 2015.