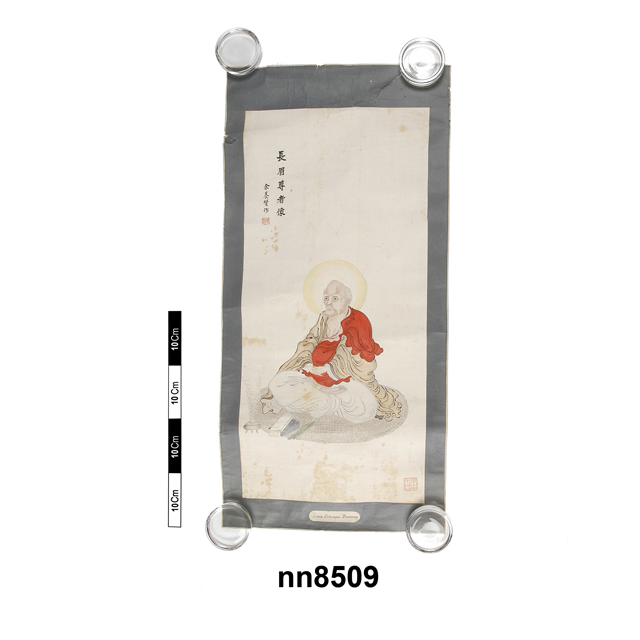 Scroll of painted paper depicting a wise old sage. The calligraphy “長眉尊者像, cháng méi zūn zhě xiàng” in the vertical column on the right literally means 'painting of the Long Eyebrow Lohan' (also known as Asita). He is one of ‘The Eighteen Arhats/ Lohans’(or ‘eighteen disciples of the Buddha’, in Chinese: 十八羅漢 ‘shi ba lohan’). Asita was a hermit ascetic of ancient India in the 6th century BCE. He is best known for having predicted that Prince Siddhartha of Kapilavastu would either become a great king (chakravarti) or become a supreme religious leader (Buddha) . The four characters “余養賢作, yú yǎng xián zuò” on the left indicate that this painting was painted by an artist called Yú, yǎng-xián. This is followed by a seal script inscription “養賢, yǎng xián”, the first name of the artist.

There is a seal script on the opposite corner (see the figure right). The two characters “余氏, yú shì” on the left vertical column can be translated as the artist’s surname. The other two characters on the right are unrecognised.

In Qianlongâ€™s (an emperor of Qing, 1711-1799) eulogy, Asita was described as a â€œCompassionate elder, a monk who has attained enlightenment. Perceptive of the infinite universe, with tacit understanding.â€�