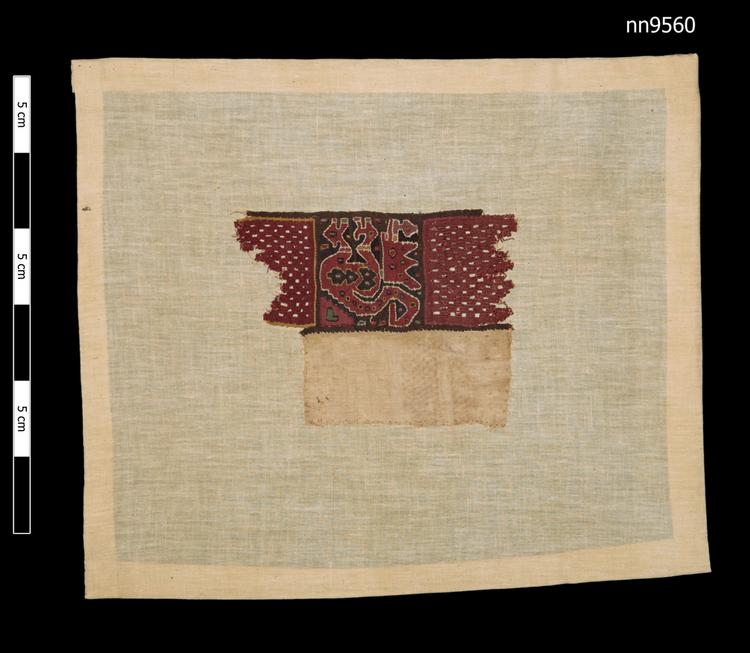 This cotton cloth is attached to a fragment of textile from Peru. The age of the textile is uncertain, but it comes from one of a number of civilisations which flourished in the centuries before Spanish conquistadors arrived, captured and plundered the region in the mid-sixteenth century. The peoples of the Peruvian Andes, such as the Inca, wove elaborately decorated and highly-colourful textiles from the wool of llamas and alpacas. This fragment appears to depict a creature of some sort, rendered in an abstract way on red-dyed wool. The red dye was particularly valuable, both to the indigenous peoples and the Spanish. It is known as carmine and is produced by the cochineal beetle native to South America and Central America. Cochineal beetles thrive on the nopal or prickly pear cactus and have been farmed for centuries and imported to the Andes. After the Spanish conquered the Americas, they exported large quantities of cochineal to Europe where it revolutionised the dyeing industry. The dye is made by boiling the beetles with alum and a range of other ingredients, leaving a dry, crumbly residue which can be easily packed for transport and sale.