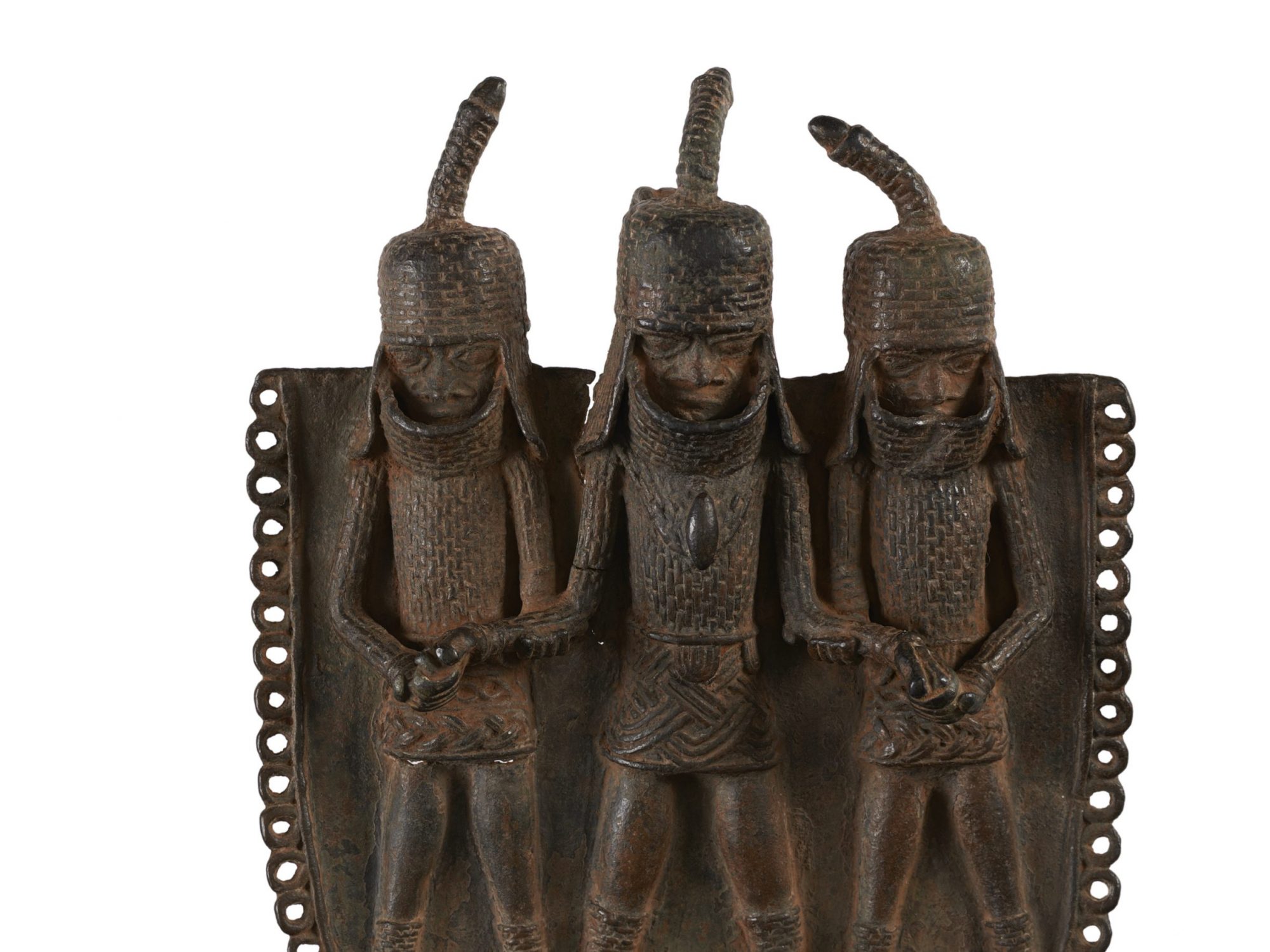 Explore some of the collection of Ancient Benin objects at the Horniman in this learning resource.

Download the resources below, or, if you would like to make your own trails or worksheets tailored to your visit many of the images and text below and in our other resources can be easily copied and pasted to your own design.

Images in this pack

This four-sided brass bell holds a heavy, swinging clapper that loudly strikes the sides when shaken. These clanging bells were not used to play tuneful music, but were important religious objects used in ceremonies to call upon spirits.

Brass plaques (pictures) show us that these bells were also worn around the necks of soldiers. As an army marched into battle, the clanging of their bells and blasting of trumpets would intimidate enemy armies and give soldiers courage. These bells were also rung to signal victory! You can find some other musical instruments from Ancient Benin in our Music Gallery.

These brass bells were worn to make soldiers feel brave; what helps you to feel brave?

Brass plaque of Agban, the Ezomo

Legend has it that, whilst telling Oba Orhogbua of a long-fought victory, Ezomo Agban was interrupted by a loud thunderclap. Agban was so angry that he declared war on the sky, building then setting fire to a wooden tower that was two miles high until the sky admitted defeat! Shrines were built to Agban in places where the burning tower fell; they are still visited by Benin chiefs today!

As there was no written language in Benin, plaques are full of symbols with extra meaning. Agban is surrounded by water hyacinths, a symbol of the water god, Olokun, and suggest that he has the support of this powerful god.

How do Ezomo Agban’s clothes show us that he was an important person?

This plaque reminds people of the Oba’s God-given power. When he first became king in 1550 AD, Oba Orhogbua’s first task was to deal with rebellious villagers who were refusing to pay their taxes. The Oba showed that he had taken over his father’s divine power by holding the royal ancestral staff, forcing them to pay.

Here, the Oba is wearing a collar and headdress made of expensive coral beads. People believed that an ancient Oba had taken coral from Olokun, god of the waters, after defeating him in a wrestling match. Consequently, coral was thought to hold mystical, protective powers and could only be worn by royals and officials. Crocodiles were thought to be Olokun’s policemen of the water; here they surround and protect the Oba, showing his power.

Which other animals held special significance in Ancient Benin? Why?

Plaques were displayed in the Oba’s palace and often show scenes of official business. The men on this plaque are emissaries, or messengers, sent on a special mission by the Oba.

The man on the right is an important war chief. We know this because he is wearing a helmet, coral jewellery, and a scabbard (sword case). On the left is a royal army priest who can be identified by his braided hairstyle and the celt stone tool tucked into a strap around his leg.

The priest is holding a cylindrical box called an ekpokin which would have been presented to the Oba as proof of a successful mission. The ekpokin probably contains soil from a captured land or the head of someone they defeated.

The two men are bringing the news of a victory over a group of people who had been fighting against the Oba. The Ohen Okhuaihe carries a sword that once belonged to one of the rebels. The sword has been broken to show that the rebel’s powers have been broken. The Civil Commissioner is holding out his hands and was probably carrying an ekpokin (gift box) that has broken off the plaque.

Benin brass plaques only show part of an event or story; who is missing from this plaque?

The biggest figure on this plaque is Ekpenede, Iyase (Commander-in-Chief) of the Benin army. Iyase Ekpenede served during Oba Orhobua’s reign (1550-1578 AD) and was married to the Oba’s daughter.

Iyase Ekpenede is carrying several weapons and is wearing both protective military clothes and an elaborate headdress that shows his importance. He also has a brass bell around his neck for protection.

The smaller figure is probably the Iyase’s own horn-blower, playing a victory song on his ivory side-blown horn. Brass plaques were made to record good things that happened during an Oba’s reign, so we know that Iyase Ekpenede was successful. However, once an Iyase led an army out of Benin, he could never return- even if the army won.

Why is the horn-blower on this plaque so much smaller than the Iyase?

This plaque tells a palace legend from the time of Oba Ewuare (1440-1472) and is unusual because it records a time when someone tried to make an Oba look foolish.

Ohen N’Ugbor, priest of Ugbor village, bet his life that Oba Ewuare couldn’t answer his riddles. The Oba couldn’t, so angrily sent a beautiful woman to trick the priest into giving her the answers. The next day, the Oba surprised the priest by answering every riddle correctly before ordering his execution.

Luckily, the priest’s guards fell asleep and he managed to escape. Embarrassed they’d let him go, the guards convinced the Oba they’d killed the priest by smearing chicken blood on their swords. Much to the Oba’s surprise, the priest later returned alive and well! His hair was tied in bundles, each with a special meaning that reminded the Oba to be more careful.

Why might an Oba want a plaque that tells this story?

Manillas are one of the oldest forms of money in the world and can be easily recognised by their semi-circular shape. Manillas were brought to West Africa by European traders where they were exchanged for goods such as pepper, ivory, leopard skins and, later, slaves.

These trade prices were recorded in 1522:

Brass manillas could be made in many different sizes and their quality would be tested by ‘ringing’ two together and listening to the sound that they made. They were highly prized by the people of Benin because they could be melted down and poured into clay moulds to make statues and plaques as part of ‘lost wax’ manufacturing process (click to see video).

Many cultures have used items other than coins and notes for money – which ones do you know?

Brass plaque of Uwangue Osokhirikpa, the flamboyant and proud one

The accessories or clothing worn by figures in Benin plaques helps us to identify them. The man in the centre of this plaque is Chief Uwangue who lived during the reign of Oba Ewuare. We know the two men behind Chief Uwangue are Portuguese traders because their clothes are very different to the chief’s. Their tall hats may be Benin straw hats, or leather hats decorated with parrot feathers, which were fashionable in Portugal during the 15th century. One is holding a manila, telling us that they are merchants.

In this plaque, Chief Uwangue is acting as the Oba’s representative to make trade links with the Portuguese. The chief is holding out the right hand of friendship to one trader, and is connected to the other by the symbol of a royal fish.

How do your clothes tell people about who you are?

This bronze pendant or ornament shows three warriors. The warrior in the middle links hands with those on either side, which suggests that they support him and are loyal.

Frogs were also seen as important as they swim with their heads out of the water. The head was seen as the centre of power, and the source of wisdom and judgement, so they also symbolise good leadership.

Many different cultures think animals are important or powerful – which do you know about?

Brass figure of a cockerel

In the royal court, statues of cockerels or ‘Ebon’, would have been placed on the altar of a dead Queen Mother (Iyoba) to honour her life. Ebon is an abbreviation of the title given to an Oba’s first wife, “Eson, Ogoro Magagba”, or “the cock that crows at the head of the harem” (a harem was a special building reserved only for women). She was most likely to give birth to the future king and was responsible for training the Oba’s other wives in court etiquette.

The Oba’s mother was an important figure in the royal court and a powerful advisor. However, she was also thought to have strong, magical powers that could be used to influence and even control the Oba. To stop this from happening, the Iyoba was not allowed to see her son after he became the Oba. Figures like this would have reminded the Oba of his mother.

Which objects remind you of special people or happy memories?

This beautiful paddle might be an important staff known as an ovbevbe. These objects were held and used by priests to chase away evil, protecting the Oba from possible harm.

The middle of this wooden, teardrop-shaped paddle has been skilfully carved out into the shapes of animals and thin lines. The handle has also been carved to look like everlasting, interlocking chains.

Though the Oba may have owned some wooden objects, royal objects were usually made from everlasting materials like brass. Wood was more commonly used to make objects for the ordinary people of Benin. Inexpensive materials were seen as part of the natural cycle of growth and decay that happens over time.

This object would have been used in ceremonies, not to paddle a boat. What clues tell you this?

A staff of office is used to show an important person’s official position or status. This staff was used to identify the head executioner and would have been held by the executioner himself or by attendants walking in front of him.

The figure at the top of this staff is wearing coral beads to show the executioner’s importance and is carrying a sword in one hand and a bell, rung to announce an execution, with the other.

This staff has been carefully carved from ivory, a piece of elephant tusk. In Ancient Benin, ivory was a royal material because it is long lasting and was thought to hold the strength and power of the elephant. Elephants were known to live a long time and were seen as strong, wise leaders- qualities that the Oba saw in himself. You can see an elephant skulls (and tusks) in our Natural History Gallery.

Today it is illegal to trade in ivory as many species of elephant face extinction. Museums don’t kill animals for their ivory, but do display ivory objects from animals that were killed in the past. Do you think museums should display ivory?