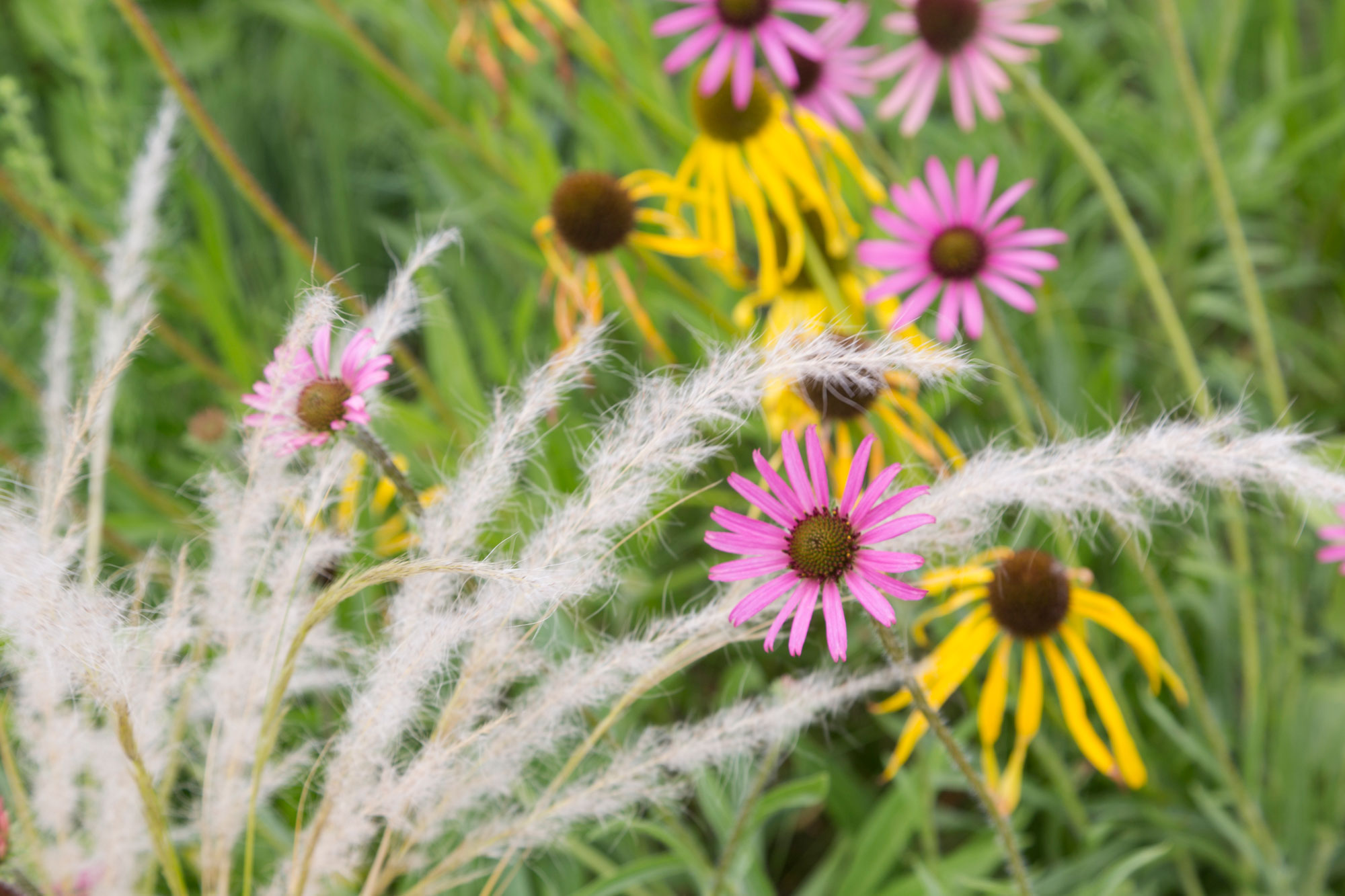 Anthropology Gardens
Damien from the Gardens team fills us in on the challenges of growing so many plants from other environments right here in Forest Hill.

With the help of Professor of Horticultural Ecology James Hitchmough, our Gardens Team has developed a new Grasslands Gardens and that has meant planting 5,000 perennials from North America and South Africa.

It’s particularly satisfying for us to see so many plants emerge in our Grasslands Gardens because we produced most of them from seed or cuttings in the Horniman’s own nursery.

Roughly 95% of the North American and 40% of the South African species for the display were produced in-house.

Planning for production began in February 2017 when we sat down to look over the final plant list for the beds. Plant production in the Horniman nursery in the past had been mostly bulk crops of annuals – perhaps 2,000 to 3,000 plants per crop – for bedding out the Sunken Garden, so the numbers we saw on the list weren’t a worry for us.

The largest crops for this project were Echinacea paradoxa, Echinacea tennessensis and the prairie grass Sporobolus heterolepis. These were to be grown in crops of 300 plants each, with most crops under 100 plants.

The big difference with this project was that we weren’t producing quick-growing annuals: plants that complete their life cycle, germination to death, in a single season. These are slower, more demanding perennials for a permanent display. This meant adjusting the growing techniques that the nursery was used to, and getting to know some unfamiliar species, in a short space of time.

James Hitchmough guided us on suitable soil mixes and this, combined with our own research along with information provided by seed suppliers, guided us on timings and conditions for sowing specific crops.

Our sowing mix was equal-parts potting compost, coarse sand, and horticultural grit. For reasons of space, we chose to sow into seed trays rather than individual pots.

As a general rule perennials are better sown into deep individual pots (nine centimetre pots are ideal) for quick, undisturbed root development but this takes up a lot of bench space. Other demands on the greenhouses in April meant space was at a premium, and sowing in trays bought us some time until plants for other projects left the nursery.

By mid-May, the nursery was starting to empty as plants for other displays went out into the Gardens. We finally had some bench space to work with, and some well-developed seedlings ready to be transferred to nine centimetre pots.

At this stage, our soil mix changed to four parts potting compost, three parts sand, and three parts grit. The higher proportion of potting compost reflecting the plants’ increasing nutrient requirements as they developed, while the sand and grit kept the growing medium open, oxygen-rich, and free-draining.

The process of moving the seedlings from shared seed trays to individual pots, known to gardeners as pricking out, was a major job for us at a busy time of year. Over 2,500 litres of soil mix had to be made up, thousands of pots filled and put into carry trays, hundreds of labels written, and of course, those thousands of seedlings carefully lifted from their trays and potted up one by one.

Once they were potted up the plants spent another fortnight in the greenhouse, recovering from their root disturbance in sheltered conditions. During the second of these two weeks, all the greenhouse vents and doors were left open 24 hours a day, gradually acclimatising the plants to outdoor conditions.

Finally, at the start of June, they were moved to the outdoor standing ground in the Horniman nursery to grow on to planting size under the watchful eye of the Gardens Team – aphids, snails, and slugs are a constant nuisance.

It was a long process but now that the beds are bursting into life for the public to enjoy we have no doubt it was well worth it.

We hope you’ll come by to visit this beautiful and constantly evolving new display garden.

Walking is one of the simplest exercises we can do; even 10-minute…
Find out more
Display
Free

Monday - Saturday: 7.15am - Sunset
Sunday: 8am - sunset
The Grasslands Garden celebrates critically threatened wild landscapes. It has…
Find out more

7.15am (Monday - Saturday) or 8am (Sunday and Bank Holidays) until 4.20pm
Alongside the Grasslands and Sunken Gardens are a number of…
Find out more
About the Horniman