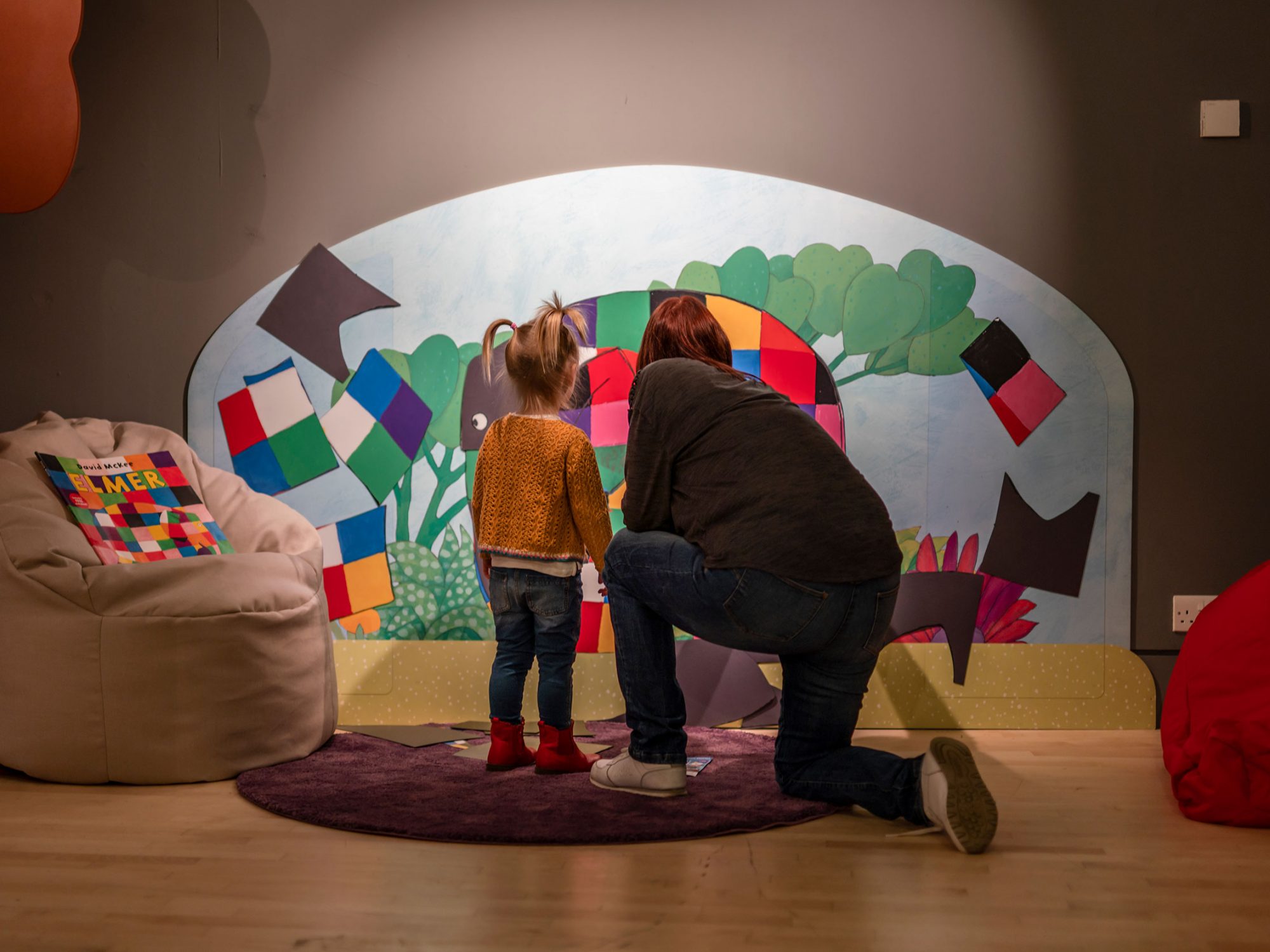 Art Exhibitions News Press release
As if by magic… Mr Benn, Elmer the Patchwork Elephant and Not Now, Bernard appear at the Horniman for its latest exhibition aimed at younger visitors under seven – ELMER and Friends: The Colourful World of David McKee.

ELMER and Friends features beloved characters created by the late author and illustrator David McKee spanning 50 years, with original artworks displayed alongside cosy reading areas and dressing up opportunities. Visitors can step into this colourful world when the exhibition opens at the Horniman on Friday 21 October 2022.

ELMER and Friends is a major retrospective of David McKee’s striking illustrations and celebrates over 30 years of Elmer the Patchwork Elephant. First stop is Elmer’s world, where visitors can walk through Elmer’s jungle, encountering characters and stories along the way. As well as illustrations from the Elmer series there’s original artwork from McKee’s other children’s classics Not Now, Bernard and Mr Benn, an original storyboard of King Rollo and the opportunity to visit the fancy dress costume shop featured in Mr Benn.

A dedicated area of the exhibition has been co-produced with Seven Stories’ Young Producers highlighting its organisational commitment to working collaboratively with children and young people.

Elmer the Patchwork Elephant is a picture book favourite for young children. They will also recognise the cautionary tale Not Now, Bernard, while their adults can take a trip down memory lane and revisit the realm of childlike King Rollo and join Mr Benn as he leaves his house at 52 Festive Road, London to embark on another adventure.

Elmer remains one of the most widely read children’s book series of all time, selling over 10 million copies worldwide since it was first published by Andersen Press in 1989. Written and illustrated by celebrated children’s author and artist David McKee, the Elmer books have been translated into more than 50 languages and now new books, toys and clothing add to the world of Elmer the Patchwork Elephant.

We can’t wait for families to explore this vibrant exhibition at the Horniman Museum and Gardens. Seeing David’s striking artwork close-up on display is very memorable and we know that families, schools and fans of children’s literature are going to be blown away by the whole exhibition.
Wendy Elliott, CEO at Seven Stories

We’re very excited to see ELMER and Friends come to London with the Horniman, and for us to have the opportunity to celebrate the work and life of our good friend David McKee with families in the capital.
Paul Black, PR and Brand Director, Andersen Press

We are delighted to welcome young families to the Horniman to enjoy David McKee’s artwork in a fun, vibrant setting. Far more than ‘just’ a Patchwork Elephant, Elmer and his friends gently introduce principles around tolerance, kindness, patience and sustainability, making it a great fit for the Horniman.
Cressida Diez-Finch, Exhibition and Design Manager at the Horniman

Horniman Members and Benefactors enjoy free, unlimited visits to the exhibition as a special additional benefit of their annual membership. For information on how to become a Member see horniman.ac.uk/plan-your-visit/membership/.

ELMER and Friends: The Colourful World of David McKee is open from Friday 21 October 2022 and runs to Sunday 16 April 2023.

ELMER and Friends: The Colourful World of David McKee is a touring exhibition from Seven Stories, The National Centre for Children’s Books. Seven Stories is supported by Arts Council England.

ELMER and Friends: The Colourful World of David McKee

10am – 5:30pm
Elmer remains one of the most widely read children’s book series of…
Find out more Book now

We hope you will enjoy your visit to the Horniman. We've included lots of information here to help you make the most of your visit.
Find out more