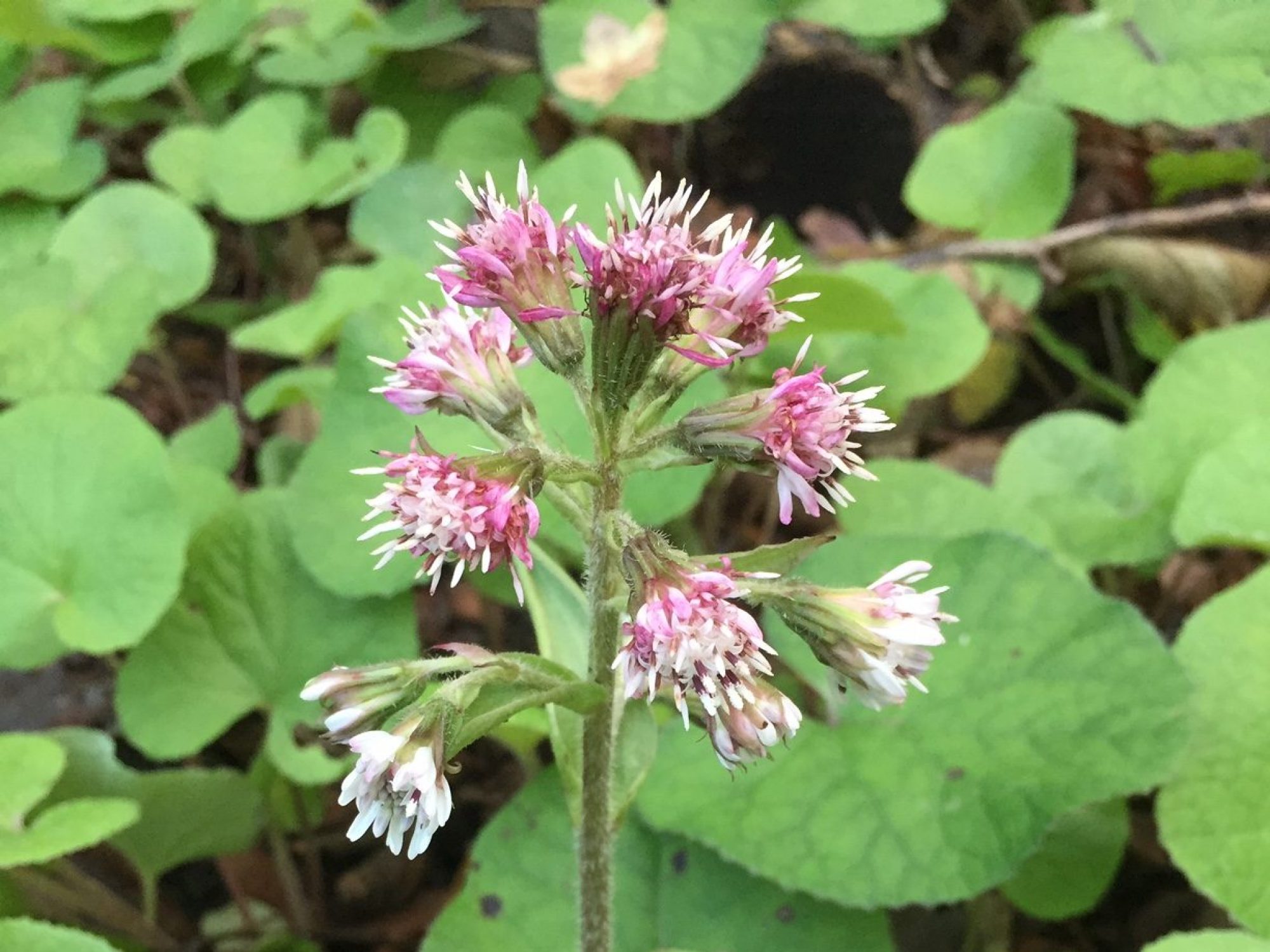 Gardens Natural world
What can you expect on the Nature Trail during cold and grey January? Trail regular Daniel Harwood has been looking for Victorian romance in one of the plants blooming there.

The trail in January can at first sight look a bit dull, but there’s often something to surprise you.

The other day, as I was standing to the side of the path allowing a man with an odd-looking dog to move past, my eyes were caught by a pinkish flower, looking fragile and out of place in the dark winter air. It arose from a bank covered with green heart-shaped leaves.

It was a winter heliotrope (Petastises fragrans). There are some on the lower path as you approach the pond, and another large patch near the gate to the trail from the tarmac footpath by the side of the Gardens. Wrinkled and sorry for themselves in the spring and summer months, they come into their own in winter. 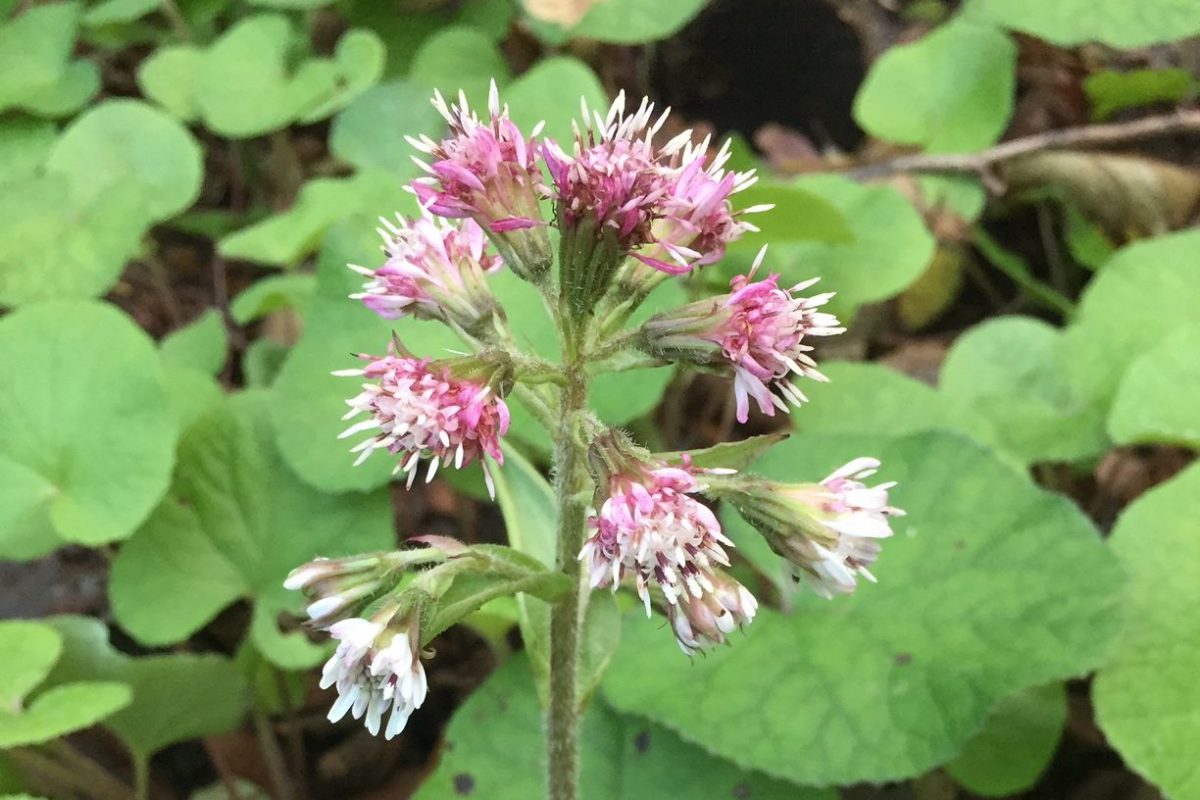 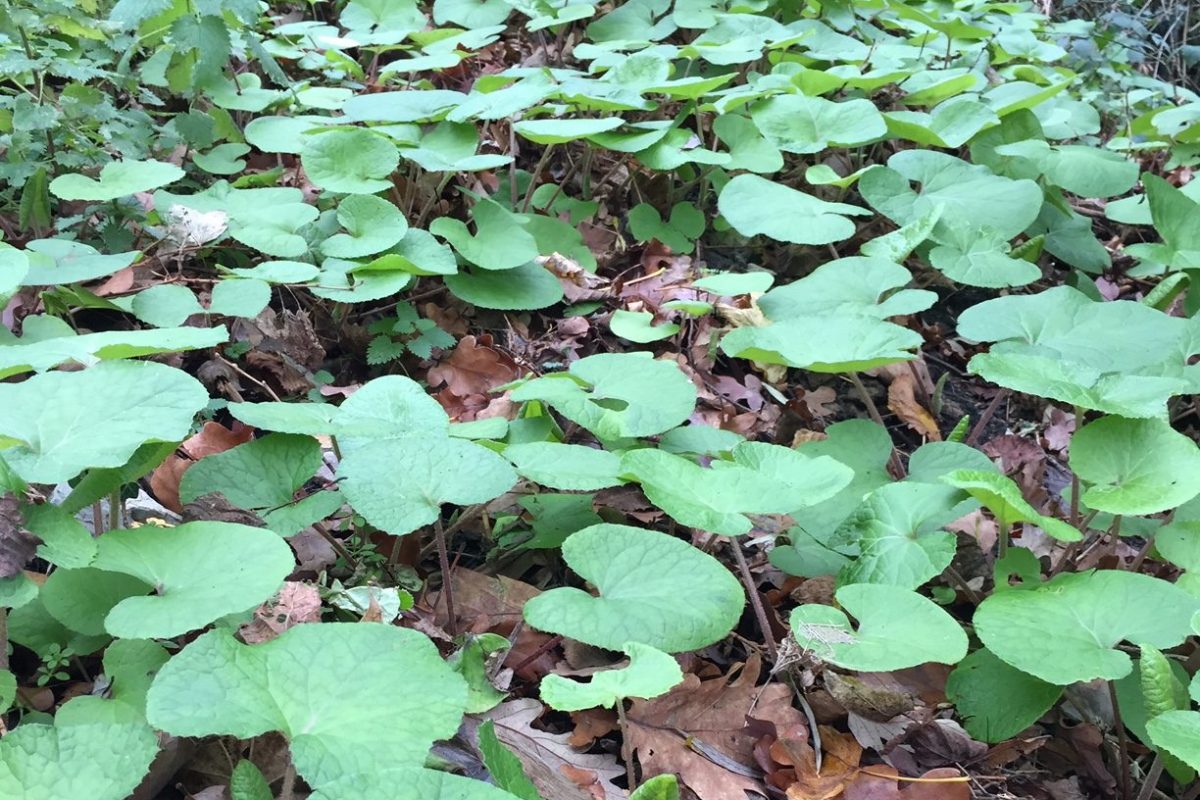 The wide leaves of the Winter heliotrope, Daniel Harwood

Like many plants along the trail, they are a garden escape. Originally brought back to the UK from North Africa and Sardinia in 1806, winter heliotropes were popular with Victorian gardeners as they provided year-round ground cover in damp and shady places. The word heliotrope in Greek means to follow the sun, as in their original habitat the plants would move through the day – like sunflowers – to face the sun.

...one can imagine Victorian ladies being greatly amused by this unusual new discovery planted daintily on a stream bank or in a sheltered dell.

Having seen the flowers myself I can only agree. I don’t think it is too fanciful to imagine a Victorian lady fainting with excitement after inhaling the striking scent, and falling down the bank into the stream of a country house. She would then have to be rescued, of course, by a gallant gentleman who would strip off his waistcoat and dive in, completing an overly dramatic rescue before striding up the bank carrying the girl lying limp in his strong arms. It is also perhaps not too far-fetched to imagine the drama of this rescue triggering further neurasthenic collapses amongst other members of the party.

After all this initial excitement, the winter heliotropes were found to be a bit of a pain in the neck.

The problem was they tended to grow in the winter when everything else had died back, shading the ground cover with their large flat leaves, making it difficult for any other woodland plant to establish and regrow in the spring.

They do though have beautiful flowers which come out between November and March with a wonderful scent. Some have likened it to liquorice, aniseed or vanilla but to me it is reminiscent of synthetic cherry flavouring. However, my wife said they didn’t smell of anything at all, and failed completely to faint into my arms as I had planned.

The British plants are wasting their energy by flowering because all the UK heliotropes are male, and in fact thought to be all genetically identical. The plant is one of those that can reproduce in two ways, both sexually, by using insects to spread pollen to other plants, and asexually by simply spreading their roots around.

The first female winter heliotrope was found in West Sussex several years ago. According to The Telegraph the male plants “are now free for the first time in 200 years to reacquaint themselves with the delights of female company”.

Well, maybe, although the male plants might equally well think, “Two centuries I’ve waited for you, sorry, that’s too long, I’ve moved on, I’m quite happy spreading my rhizomes about, thank you very much.”

Apparently, the plants have been used as a homeopathic remedy. According to the Dictionary of Practical Materia Medica by John Henry Clarke, when the heliotrope is taken it causes:

a disagreeable spiteful mood, and in a few days the opposite condition, which lasts some time…

Also, when Clarke administered his heliotrope potion to some unfortunate individual, “the patient’s stoutness increased but later the abdominal protuberance disappeared”. Quite why any of these effects could be seen as therapeutic I’m not sure, but I suppose if you want to feel a bit spiteful and then feel a bit less spiteful, or achieve a temporary state of stoutness, the winter heliotrope is the plant for you!

I like the winter heliotrope. I like the surprise of finding its rich-scented flowers, I like the fact it is a link to our Victorian gardening ancestors and the Mediterranean. And it has a very important purpose; to provide food for bees in the winter. With climate change and the year-round availability of garden flowers, more and more queen bees, especially the buff-tailed bumblebee (Bombus terrestris) remain active through the winter in the south of England. 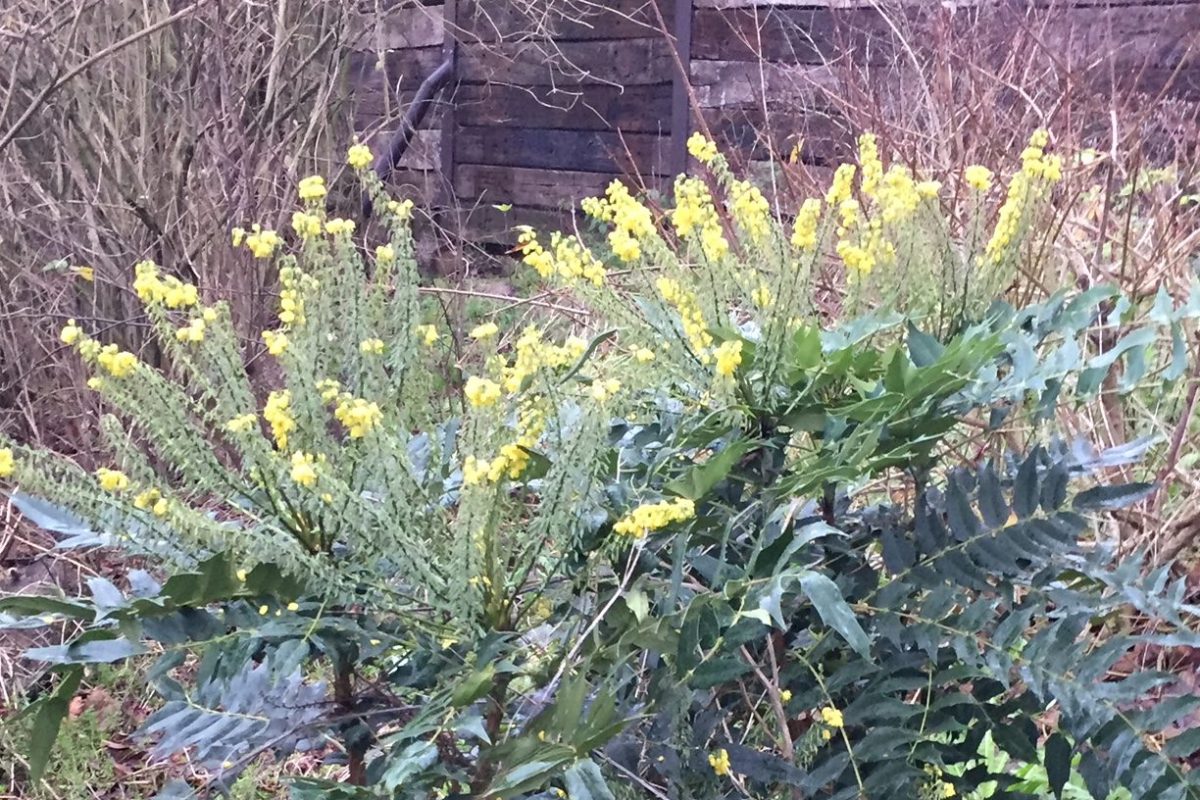 Mahonia, which provides another food source for bees, Daniel Harwood 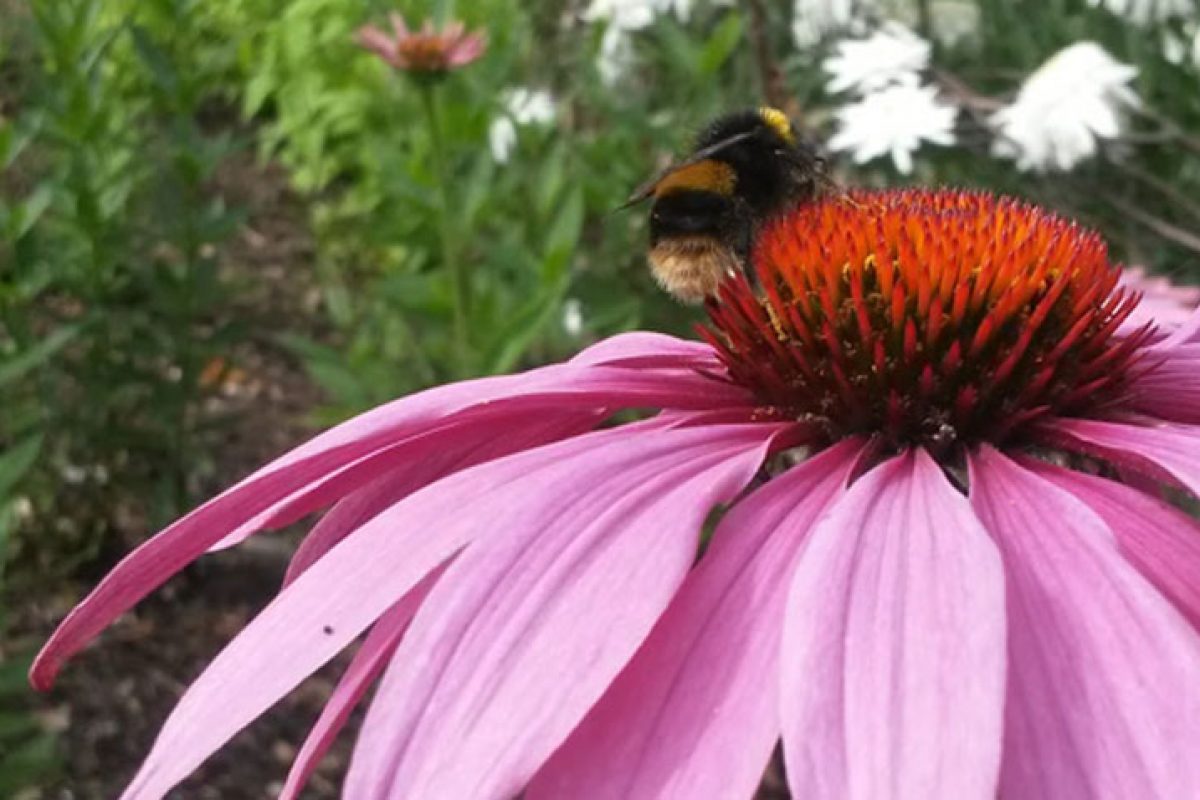 A bufftailed Bumblebee on an Echinacea purpurea, Andrea Benson

Another plant important for the provision of winter bee food, is the mahonia, a good example of which can be seen at the entrance to the Horniman Gardens just a few yards from the Nature Trail entrance on London Road.

Have a look as you go past the heliotropes and the mahonia, and see if you can spot a busy, fat bumblebee collecting pollen; always a cheering sight in the chill of winter.

The Bumblebee Conservation Trust has lots of photos videos and well-presented information on bumblebees.

The frustratedgardener.com has more information on the winter heliotrope, and wildflowerfinder.org.uk has excellent photos.