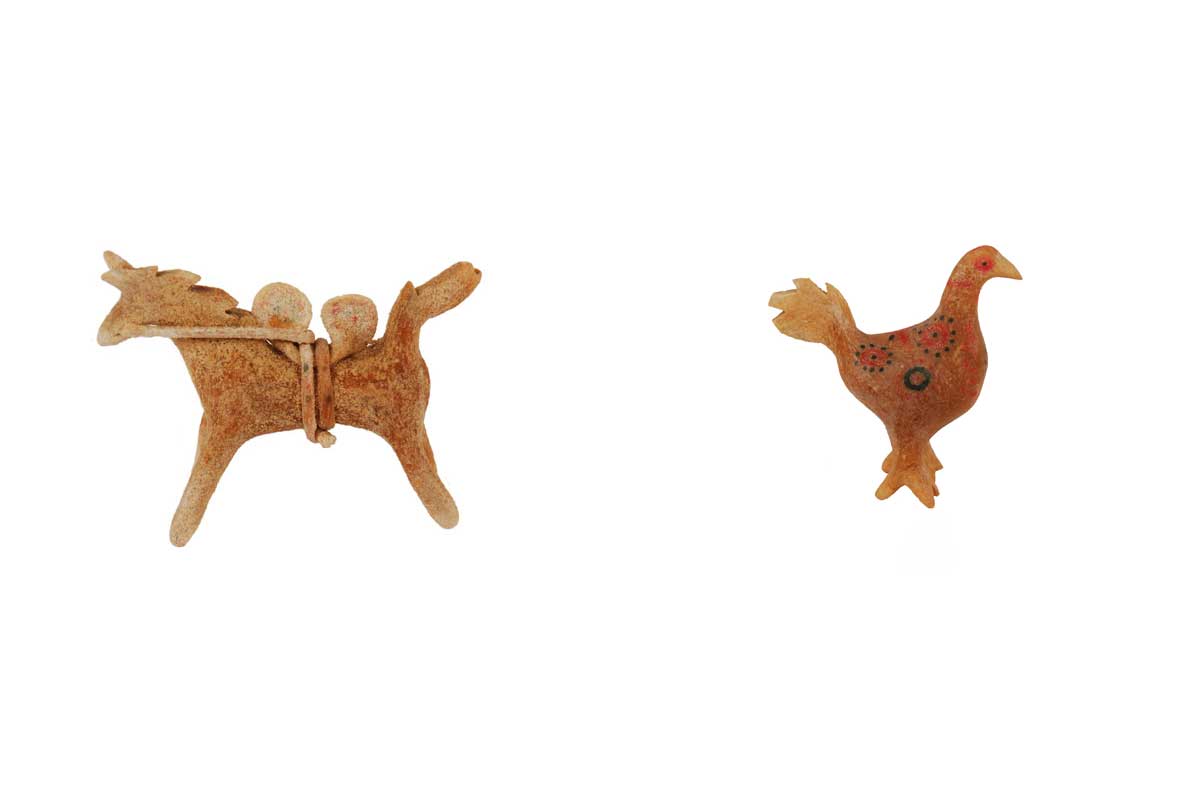 Anthropology Food Research
The origins of cheese predate recorded history. How is it made, and what objects does the Horniman hold that can tell us more about cheesemaking and cheese mongering?

In 2013 Harry G. West spoke at one of the Horniman’s Food Drink and Feasting talks about objects related to cheese making and cheese mongering.

This is a vat from the village of Salva in Romania, which is likely to have been used in the making of cheese from ewes’ milk.

Salva lies in the District of Cluj in Transylvania. Many of the cheese making objects from Romania in the Horniman Museum’s collection were part of a 1956 Horniman exhibition assembled by then curator Otto Samson and colleagues at what is now the Museum of the Romanian Peasant. These objects were subsequently given to the Horniman.

The wood of this vat harbours micro-flora indigenous to milk and contributes to the acidification that is fundamental to cheese making. Vats like this one may still be used in the making of ewes’ milk cheese today.

However the use of wood may diminish following Romania’s accession to the European Union in 2007 and the resultant enforcement of EU food safety standards, which favour the use of non-porous surfaces such as stainless steel in food manufacture and preparation. 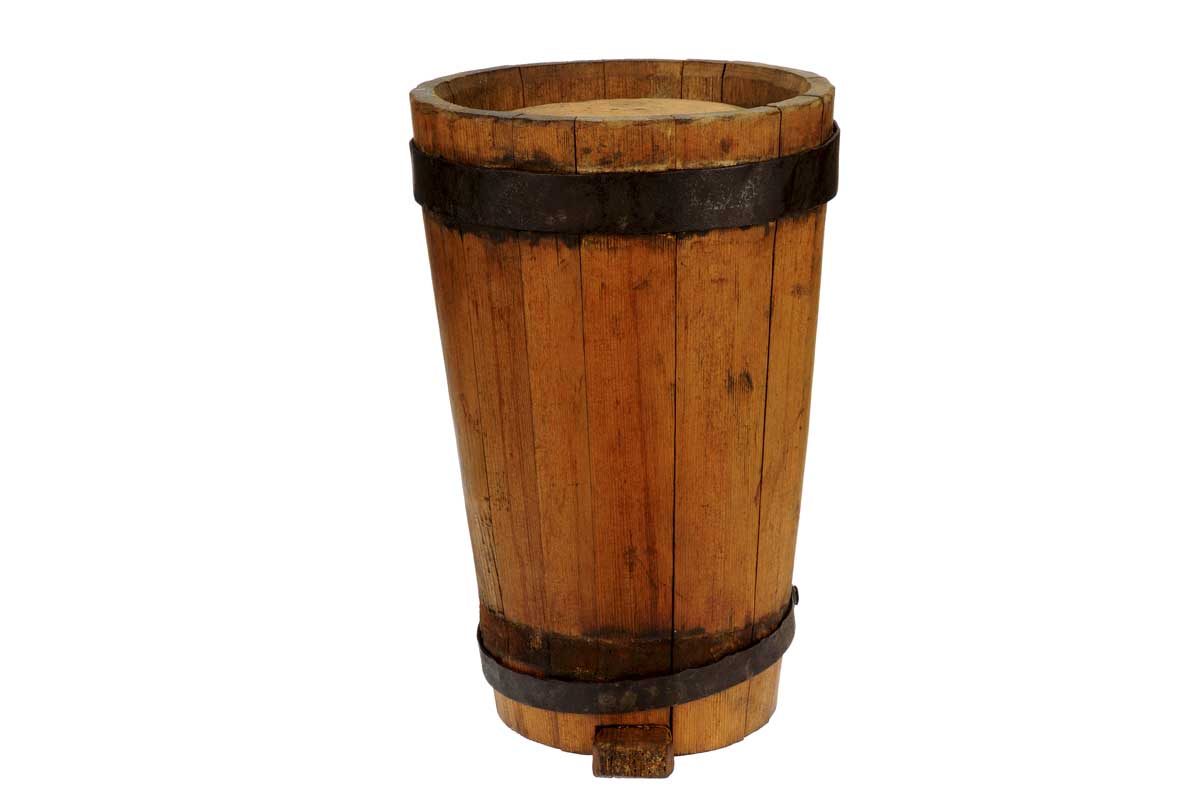 This wooden tally stick is from the village of Salva.

It would have been used to measure milk in the vat so that the rennet and salt used to make cheese could be calibrated accordingly. This functional object was decorated by the cheese maker, as many objects associated with cheese making have long been.

This wooden creaming spoon is from the Romanian village of Straja.

It may have been used to skim cream off the same milk from which cheese was made.

While cheese is an excellent source of animal fat in a more durable and transportable form than liquid milk, its production has been secondary to the making of butter in many places and times. 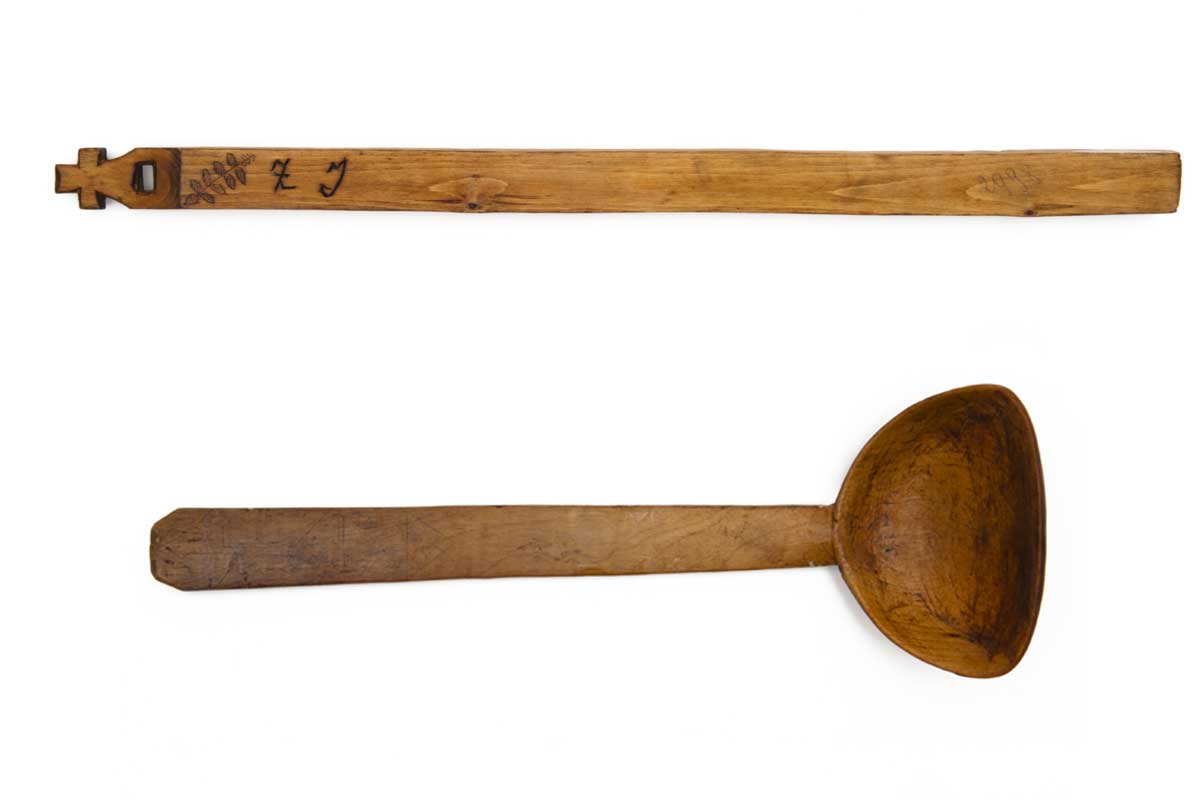 In the making of many kinds of cheese, the separation of whey from the curd continues outside of the vat, even as the cheese is given its form (the root of romance language words for cheese such as the French fromage and the Italian formaggio).

Here, we see a simple basket, collected in Cyprus in 1990 by a Horniman Museum curator, in which a soft moist curd—likely made from ewes’ or goats’ milk—would have been deposited to drain.

The outer edges of cheese drained in this basket would have taken on its texture, giving a pleasing aesthetic. 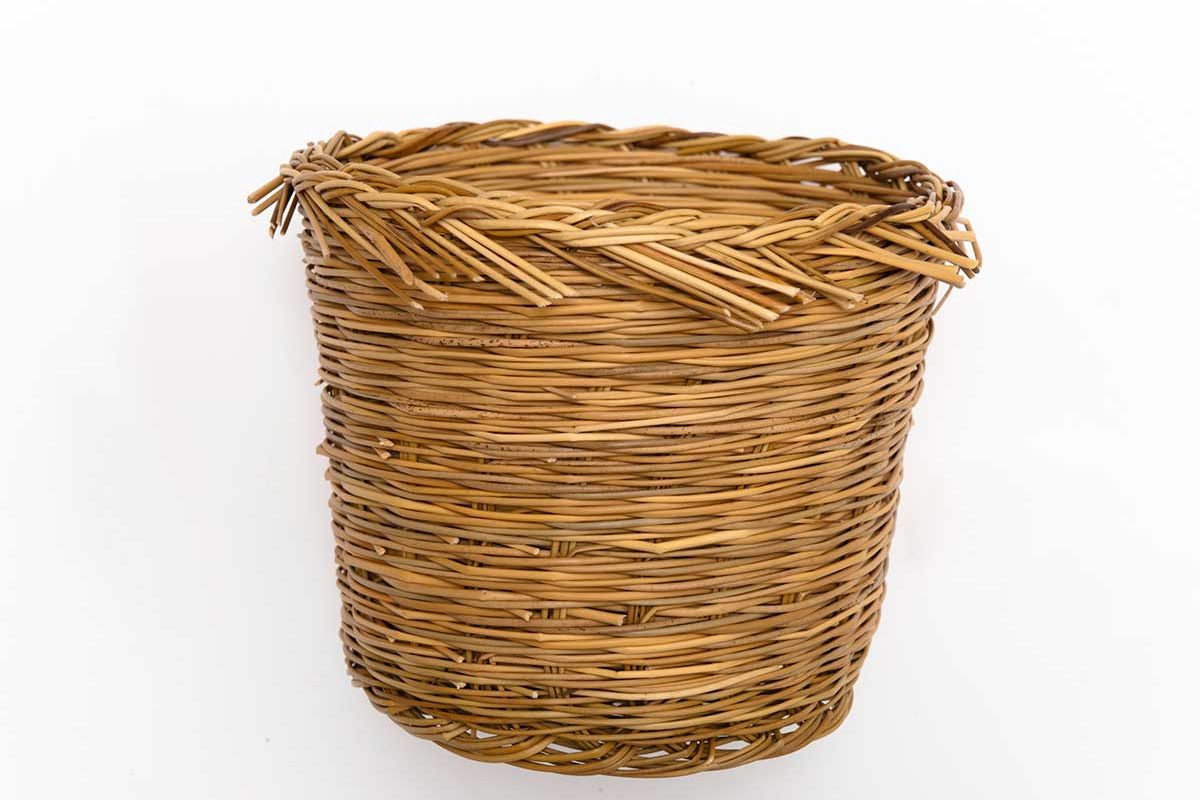 This ceramic strainer was made and used in Denmark in the 18th century. It would have allowed whey to drain out, but the inward curve of its edges would have made it difficult to extract a firm curd without damaging it.

It was likely used only for draining, and the curd was probably placed in another vessel before firming up. 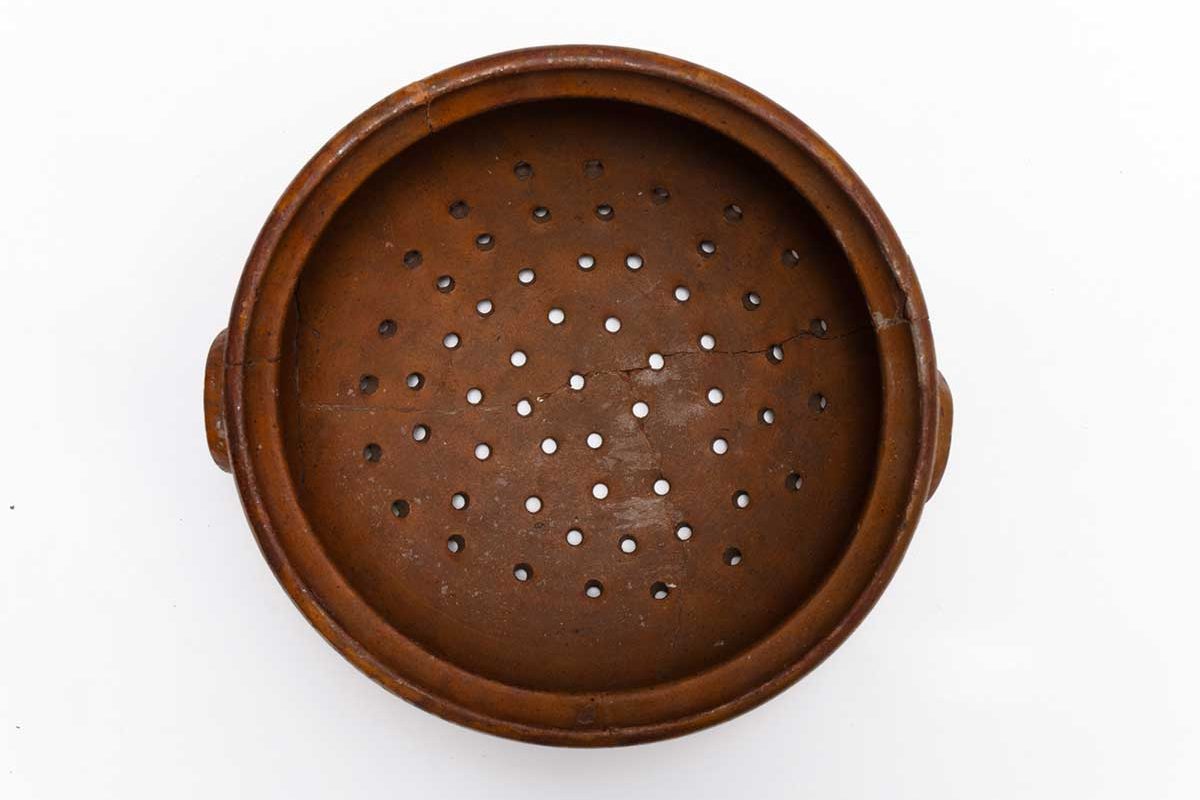 This early 20th century English mould, with its straight edges, could have been used to drain and to form a cheese.

A mould of this size would have been appropriate for making cheese in a farmhouse kitchen from the milk of a single cow on a small farm. 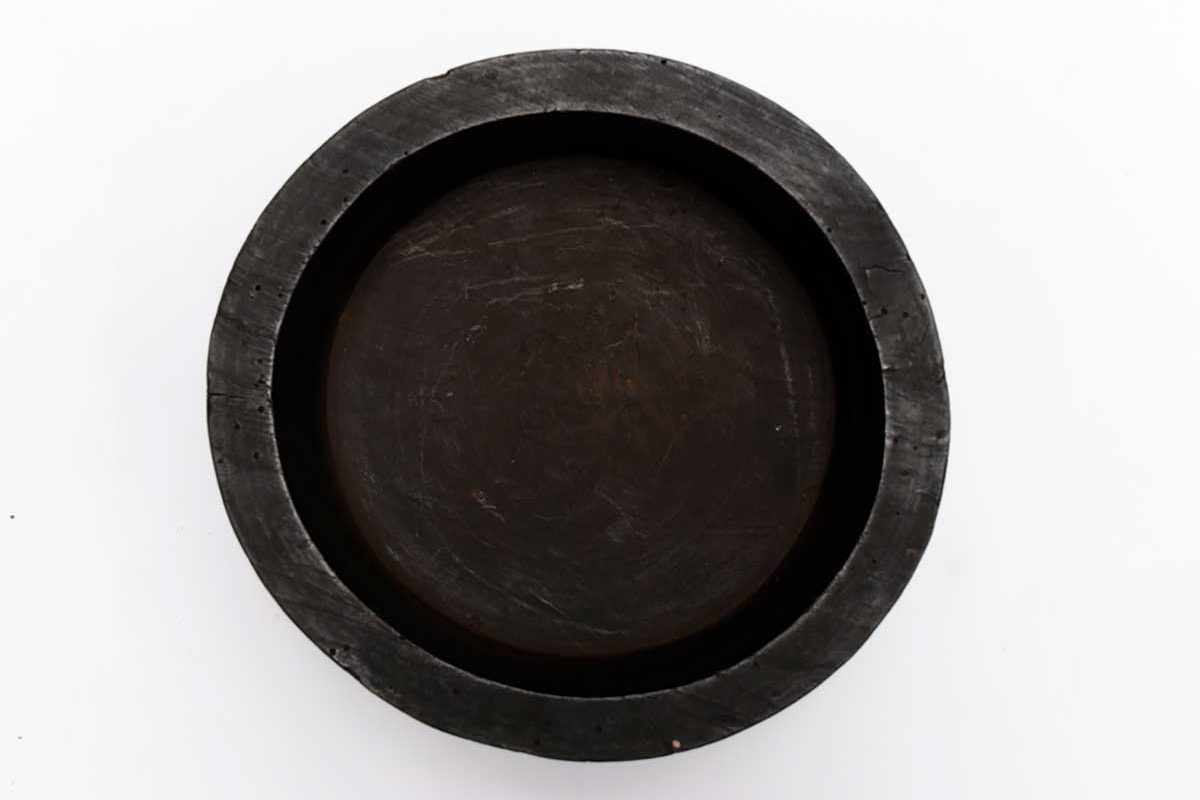 This mould was collected in the Netherlands and came to the museum in 1962. It would probably have been used in the production of Edam cheese.

Its vertical wooden slats are held together by iron rings, but move slightly, with small gaps between them, allowing whey to drain out of the sides while giving shape to the cheese.

A small lid would have been placed on top, allowing the cheese maker to press down by hand to force out more whey. Moulds like this were replaced by plastic ones only in recent decades, not only to comply with the demands of new food safety regulations, but also because plastic moulds are simpler to clean, easier to maintain, and cheaper to replace. 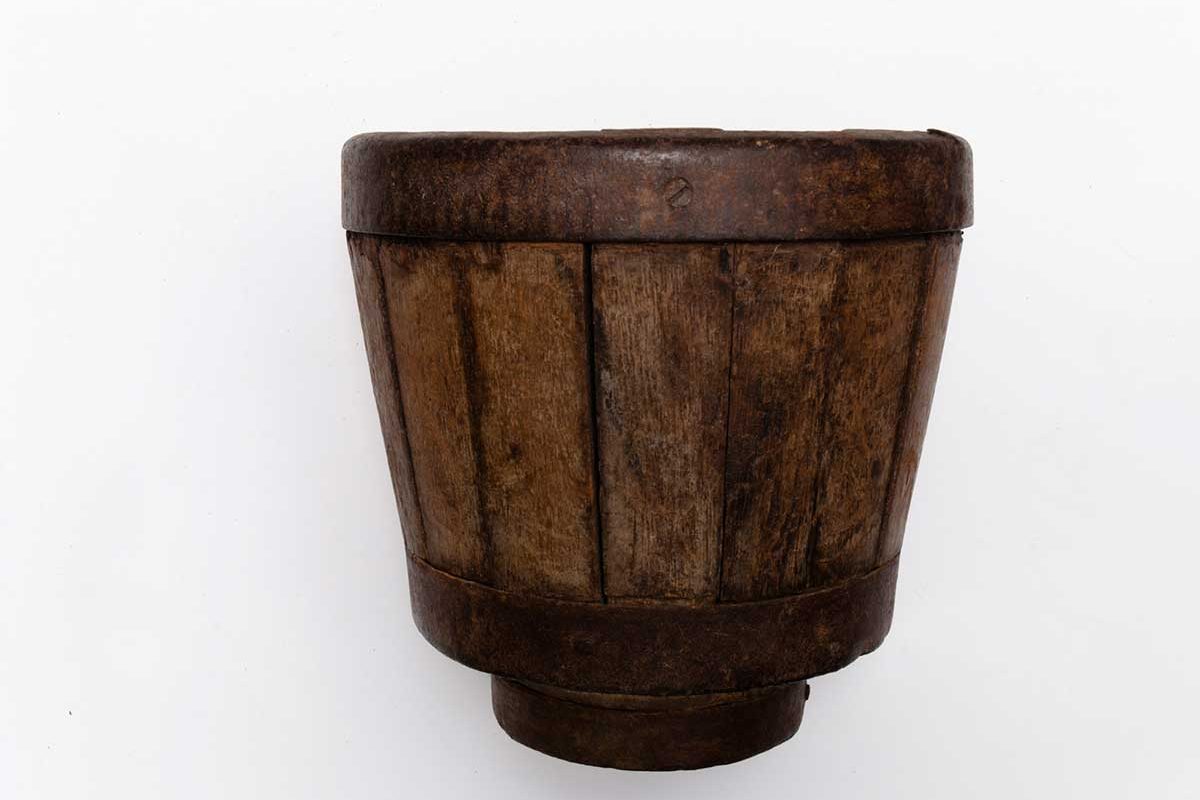 In many kinds of cheese making, the draining of whey from the curd is facilitated by pressing to force out more moisture, making longer preservation of the cheese possible.

This belt from Switzerland would have given shape to a cheese, just as the moulds above. It came to the Horniman Museum in 1959 as part of an exchange with Musee de l’Homme, and may have been used considerably earlier.

The belt would have been set on a flat surface, and curd deposited into it. Whey would have drained out the bottom as the belt was progressively tightened.

In the making of many Alpine cheeses, the curd is also pressed by placing a disk on top of the curd and applying vertical pressure either by placing a static weight—often, as simple as a stone—on top, or by the use of a more sophisticated press. 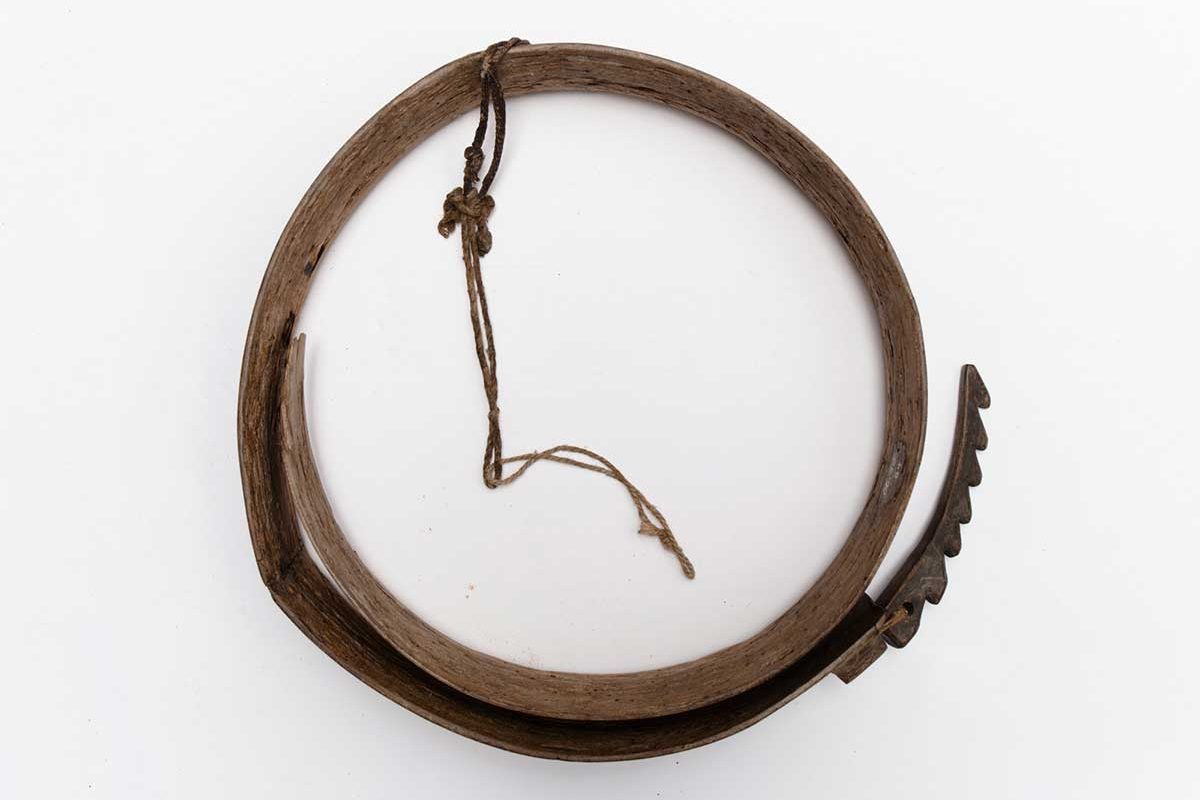 This cheese iron was acquired in 1962 in England. It could have been used to sample cheese from the interior of large wheel cheeses, including cloth bound ‘territorial’ English cheeses such as cheddar. 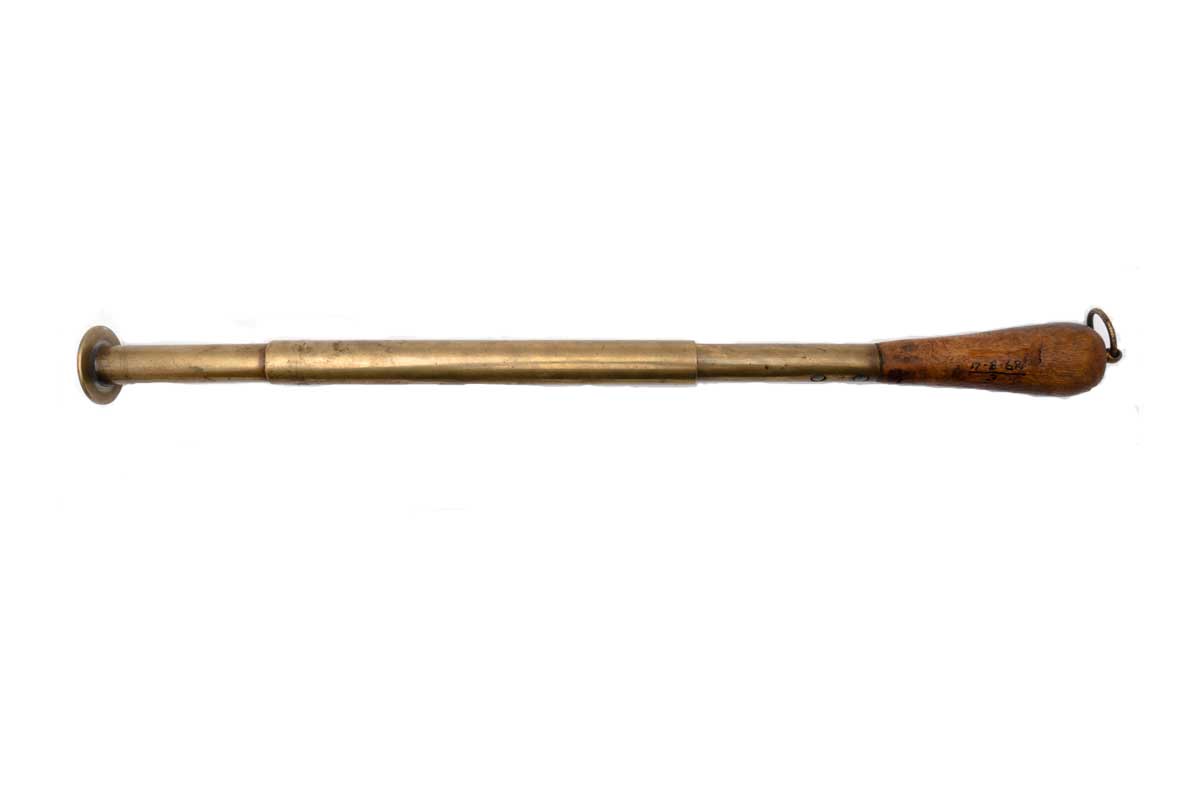 Cheese cutters like this one would have been common in shops selling cheese in centuries past.

Despite its menacing appearance, the small size of this cutter reminds us that English cheeses were generally smaller in the past than they are today. 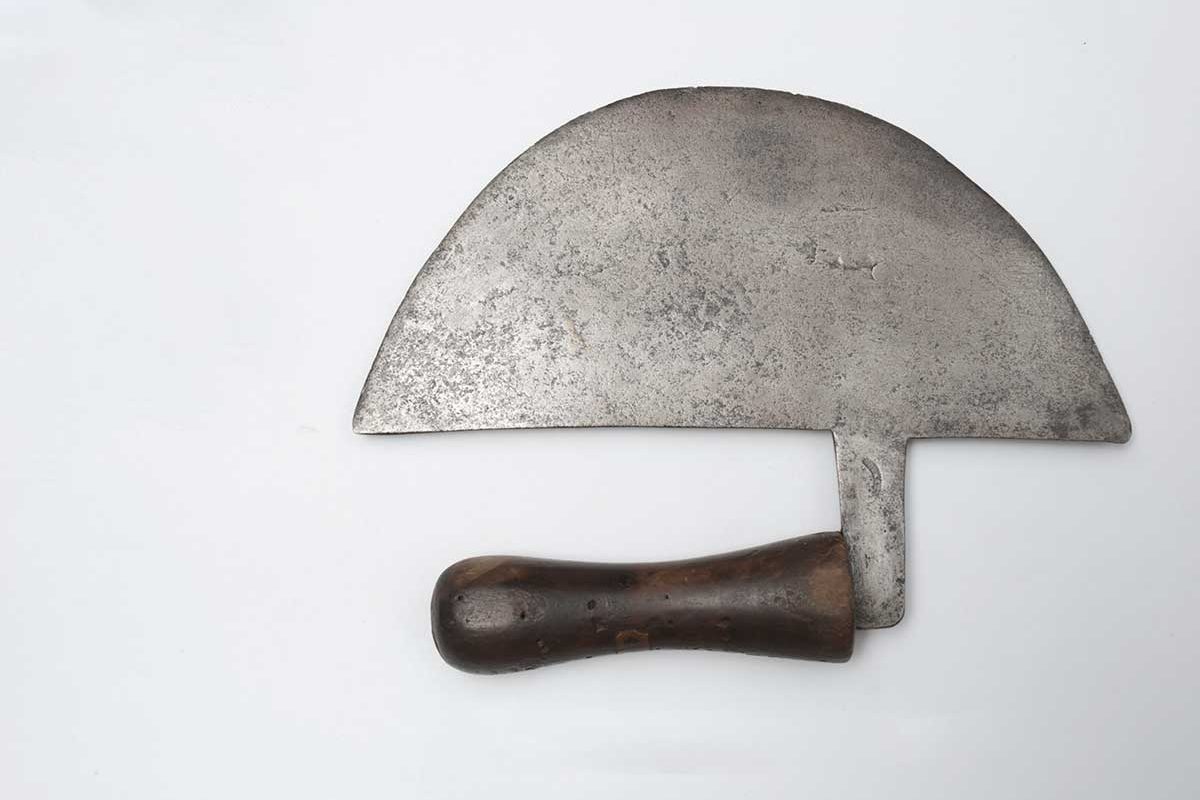 Pressing numerous cheeses by hand is hard work, and many cheese makers have historically suffered from repetitive stress injuries.

To make their work easier, cheese makers developed an array of simple machines to assist them in the work of pressing. The press on the left is tiny, and its date and provenance are unknown.

The top disk slides up and down on two posts anchored in the bottom disk (i.e., the handle was used to hold the press steady, but not to push down on its contents). Any cheeses made in this press were likely wrapped in cheese cloth.

The press on the right is a more sophisticated press from Poland . It is hinged at the lower end, and drawn together at upper end by a screw mechanism. 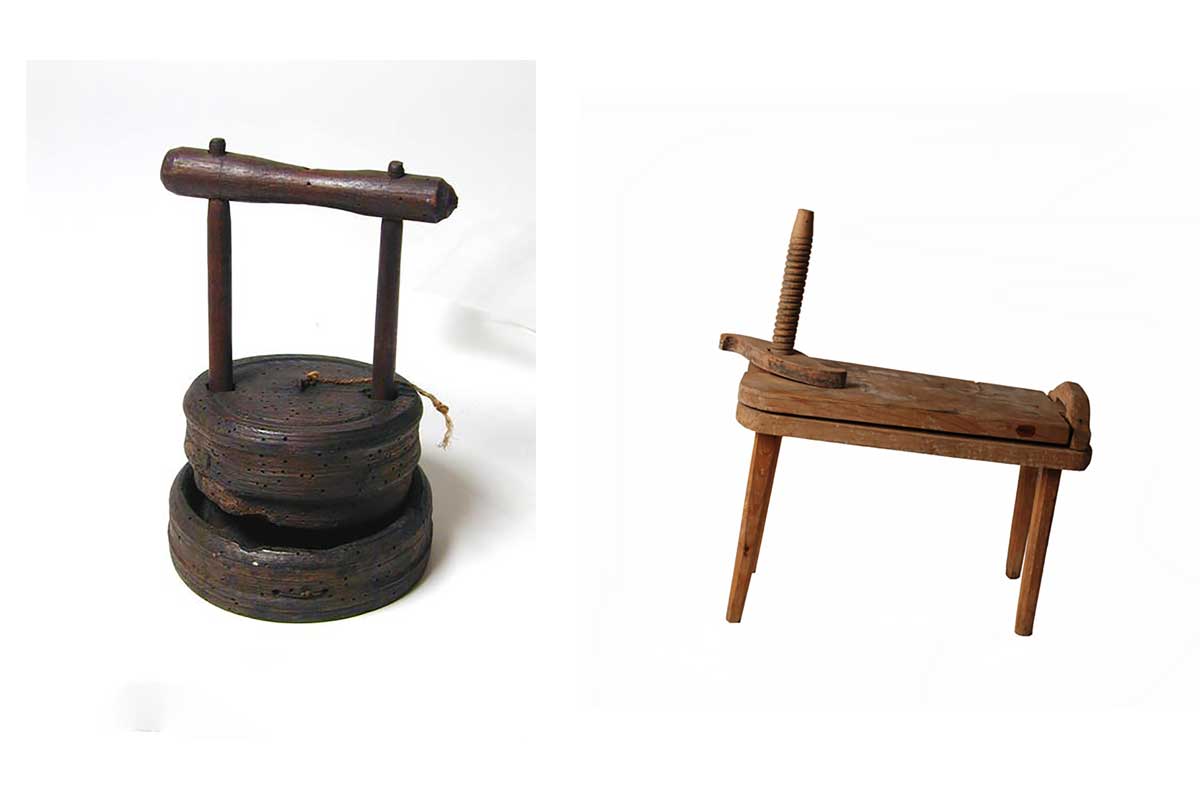 This cigarette card, depicting the centuries old trade in ‘curds and whey’ (probably referring to ‘junket’), brings us from the vat to point of sale.

Its stereotyping assertion that ‘[t]he carriers employed by the milk dealers of the 18th century were usually strongly-built Irish or Welsh girls’ reminds us that such products were produced, traded and consumed across lines dividing people of different socio-cultural backgrounds and interests. 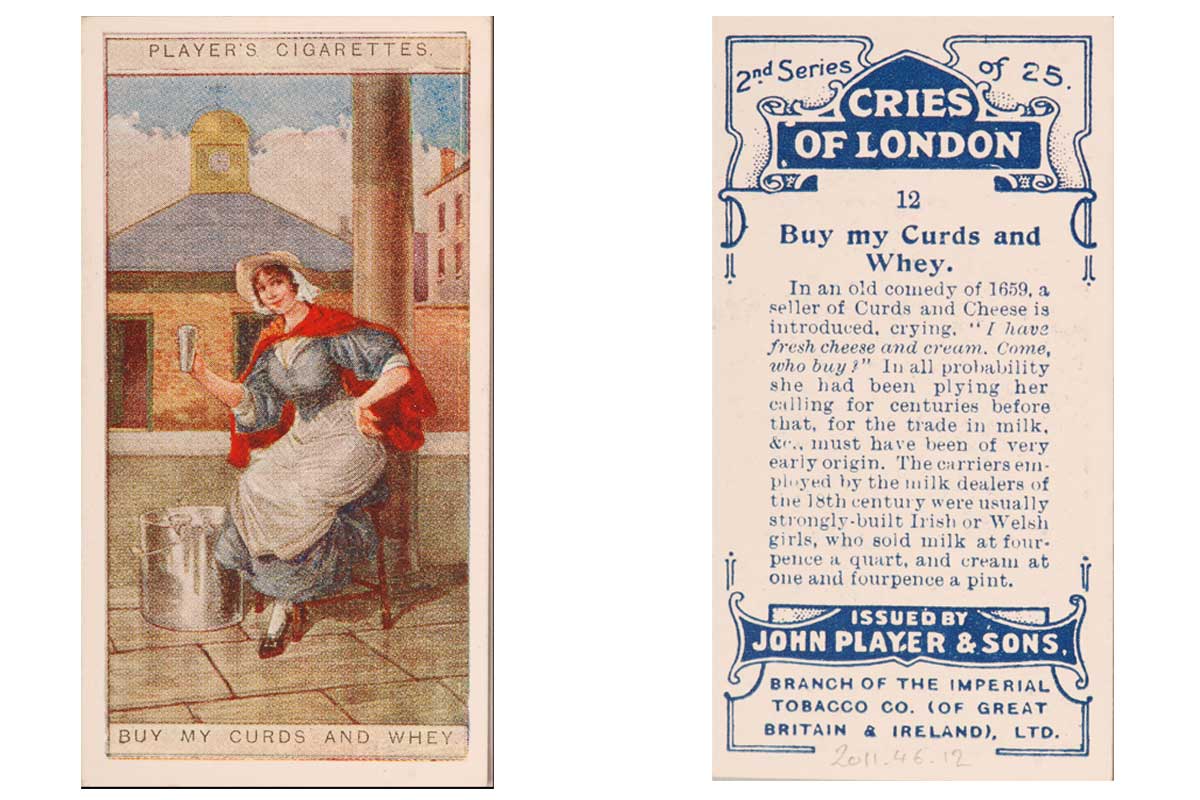 This object  is one of many like it in the Horniman collection, and may date to the early 18th century.

Made of bone with designs carved in them, such objects were reportedly given as love tokens. Their principal purpose was probably to cut the core out of apples, but some people may have used them to ‘scoop’ other foods, or to sample softer cheeses. 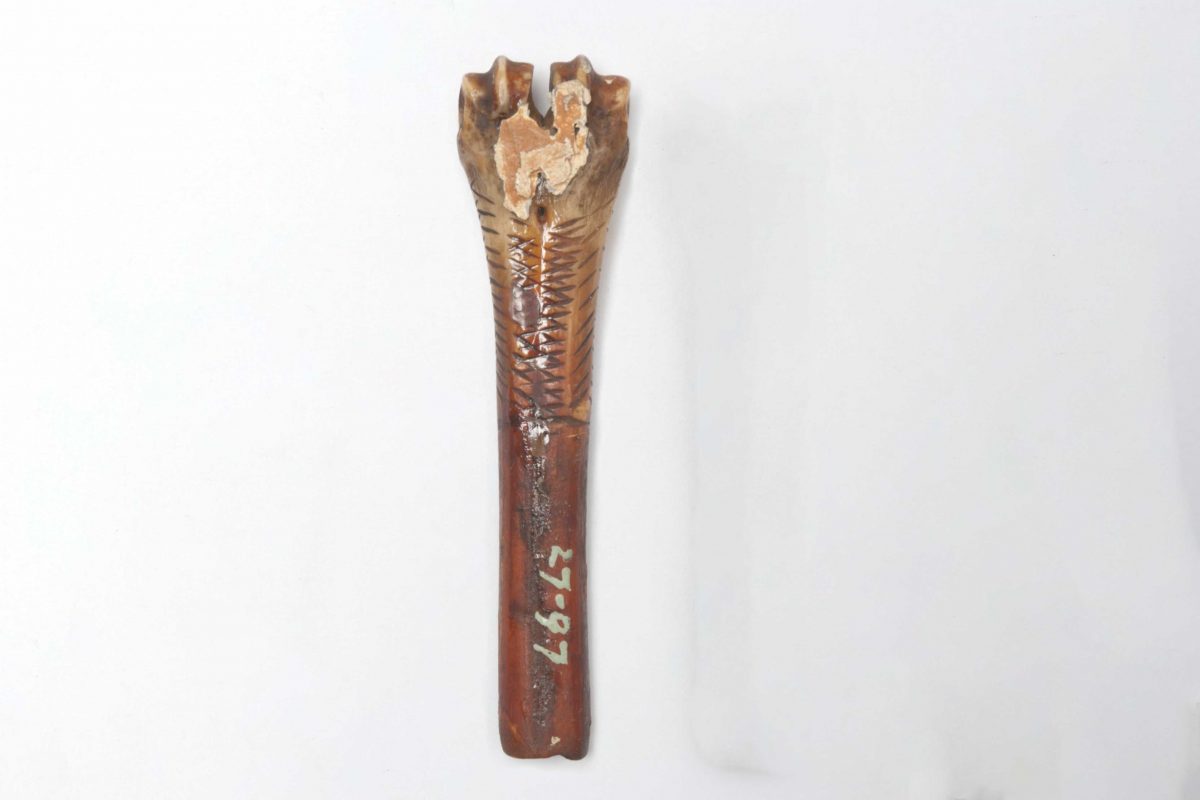 This elaborately adorned cheese mould is from the village of Vrincio in Romania. Cheese makers throughout Eastern Europe used such moulds to give their cheeses aesthetically pleasing crusts. 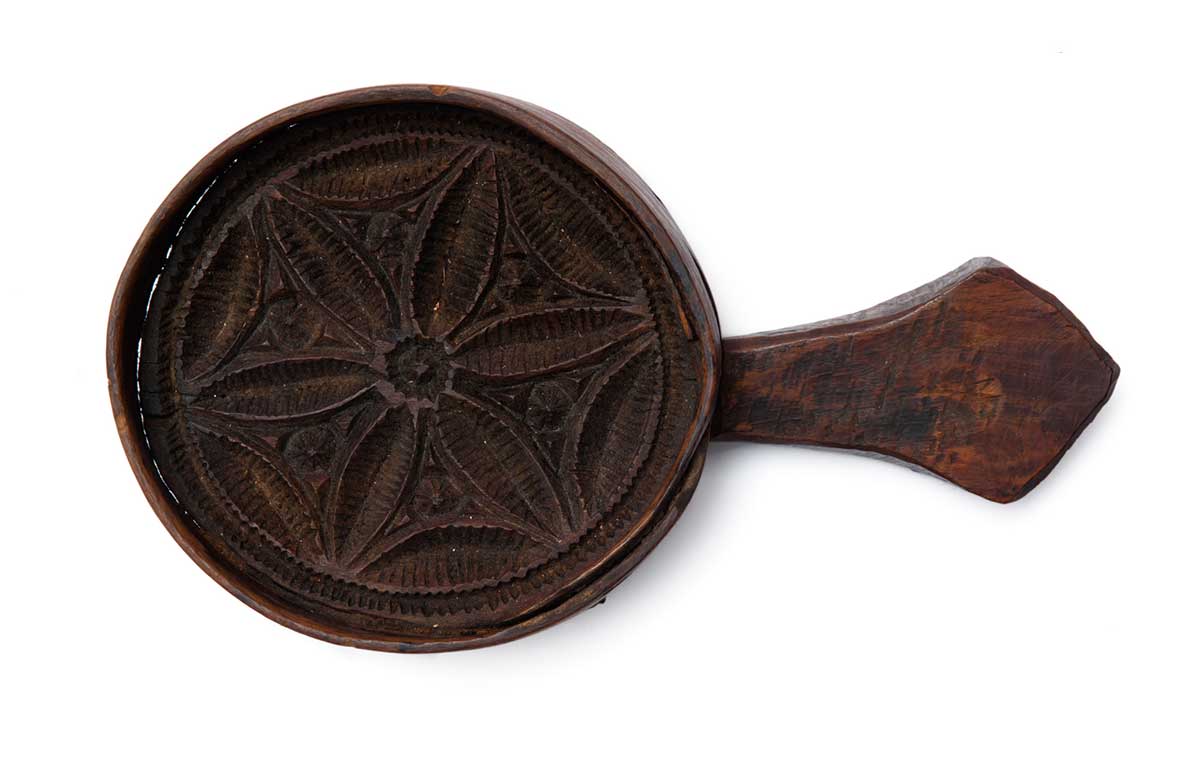 This small duck figurine —acquired in Poland and made of wood—could have been used to imprint its shape in relief in a piece of curd or butter. 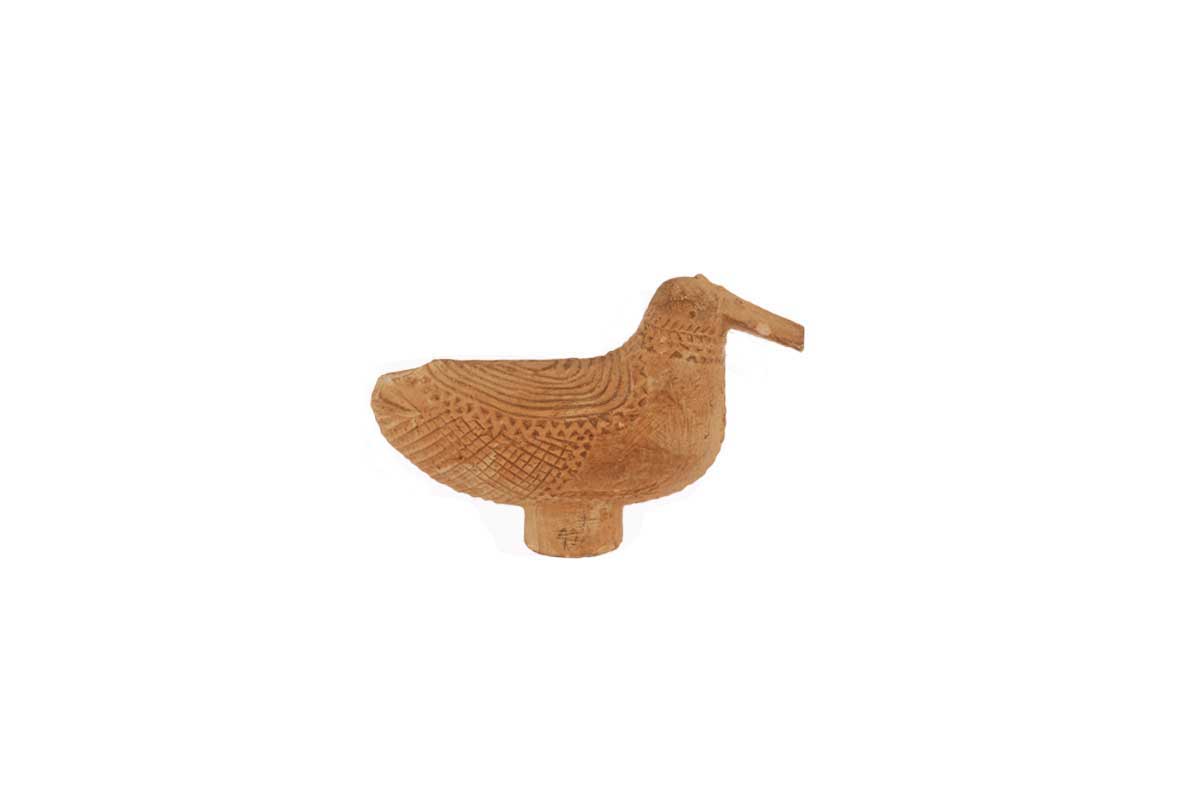 This small hen, and this exquisite little horse – both from Poland – are carved from dried curd, likely a smoked stretched curd such as that made today in the Tatra mountains.

Shepherds passing time in isolated cabins in high mountain pastures carved such figurines from scraps of curd to pass the time, and sent them to loved ones in lowland villages, or presented them upon their return, as tokens of affection.