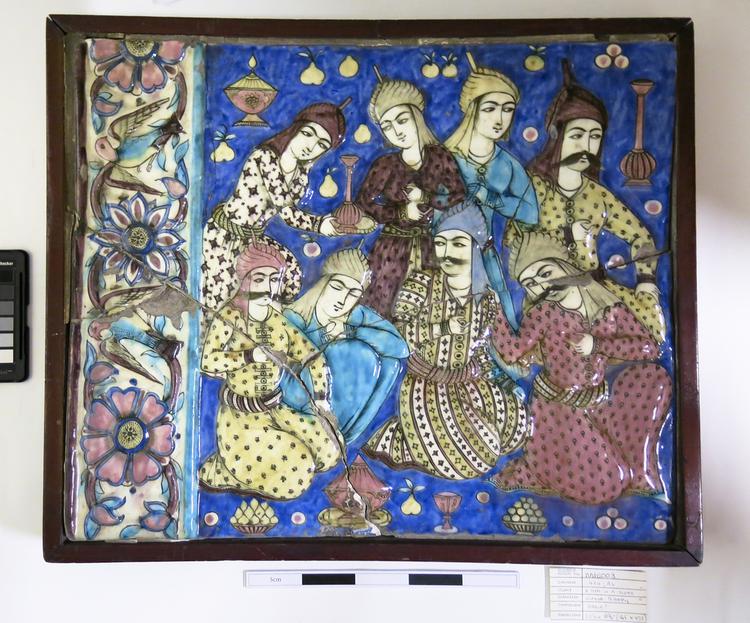 Tile depicting seven men, possibly at a picnic, with a servant. It was probably manufactured in Tehrān in the 1880s, either by the potter and tile-maker Ali Muhammad Isfahani, or by a colleague of his.

In the late 19th century, Qajar artists began to imitate the art of the Safavid period. In ceramics, Qajar potters such as Ali Muhammad Isfahani were inspired by seventeenth-century tile panels that decorated palaces in Isfahan. Many of these included elegant courtiers drinking wine in lush gardens. Ali Muhammad Isfahani made tiles for both European and Iranian clients and at the request of Major General Sir Robert Murdoch Smith KCMG, Ali Muhammad Isfahani recorded his methods and materials in the treatise, “On the Manufacture of Modern Kashi Earthenware Tiles and Vases”, published in Edinburgh in 1888. (Kashi, or Kasi, was the name used for enameled pottery and tile-mosaic work, as practised in Iran and India). The Horniman tile is classed as ‘fritware’ : a mixture of finely ground white flint stone and white clay. A fritware tile is moulded into flat panels, painted and then glazed. Colours can run during firing, so outlines of figures and objects are drawn in black for greater clarity.