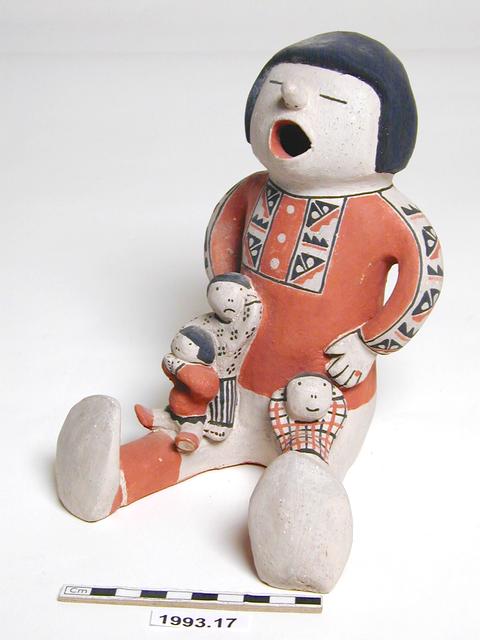 Figure of a seated story-teller, with an open mouth and three small figures seated on his legs. It is modelled from clay, with garments painted in red and brown pigment.

Story-tellers are important traditional roles in many Native American societies. This figure, from the Cochiti Pueblo in New Mexico, is a depiction of a Cochiti elder, mouth agape as the story unfolds, with children seated on his legs. The first Cochiti potter to create a story-teller was Helen Codero, who was at the forefront of the Cochiti artistic revival in the mid-twentieth century. She felt that pottery vessels were not expressive enough of the Cochiti way of life and so began to make figurines of her grandfather and the stories he told, depicting the way in which the oral histories of the Cochiti people bind generations together. This piece, produced in the early 1990s, was made by her granddaughter Buffy Cordero-Suina, a noted potter who produced many story-tellers. Following her grandmother's death in 1994 however, she stopped producing pottery altogether.