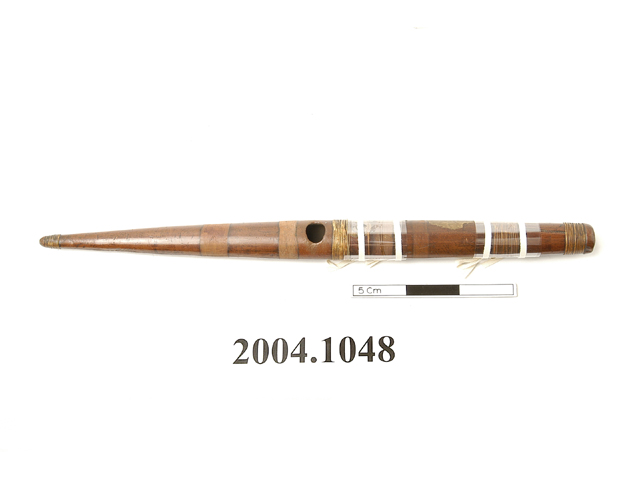 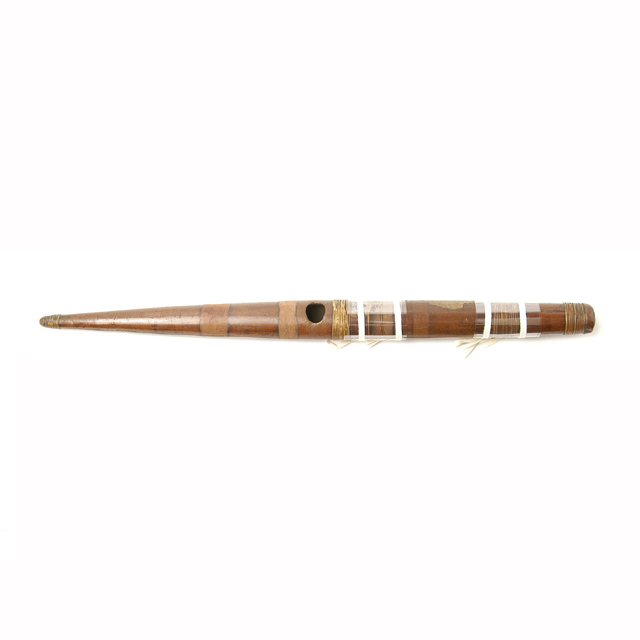 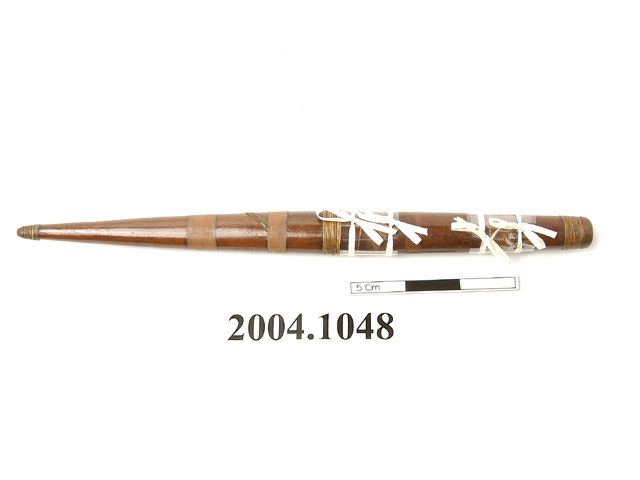 Pūtōrino, carved wooden flute or trumpet, made from a single piece of wood split longitudinally and bound together. The instrument is probably made from matai (Prumnopitys taxifolia) wood, and the binding from the split root of the kiekie (Freycinetia banksii) plant. Large central hole and open end. Some decorative carving 'pakati' on the vertical axis below the proximal end, and on the back. Four sections of binding are missing. A description written in ink on the back of the instrument reads: 'Musical Tube/ ..... Sea Islands/(13.m)'.

Bugle-Flute, Putorino, New Zealand Maori The Maori putorino is usually described as a bugle-flute in English, because it had the quality of producing two distinct sounds. When the middle hole was stopped with a thumb or finger and the instrument blown with force, it gave out a horn-like note that was understood to be masculine in quality. Conversely, if the end hole was stopped and the instrument blown softly, it produced a softer flute-like note from the middle hole that was viewed as feminine in nature. In many putorino, the middle hole is consequently carved as the open mouth of a face that represents the patron goddess of the flute and other musical arts, Hineraukatauri. The bugle-flute consequently had a dual role to play in Maori life, being used both for signalling over large distances, and for musical accompaniment. Putorino were generally carved by tohunga whakairo (wood sculptors) in two halves which invariably fit together with remarkable precision, and were then tightly bound together using vegetable fibre. While North Island putorino were generally carved from matai wood (Podocarpus spicatus), the South Island Maori took advantage of the soft pithy core to be found in poroporo (Solanum aviculare) and tutu (Coriaria ruscifolia) branches, hollowing them out with little labour to create the instrument’s two halves. D. J. Blaikley's collecting for Boosey & Co was influenced by a comparative approach to the study of musical instruments. To this end, a number of instruments from cultures around the world were acquired. Other examples include a nose flute from Tahiti, a Tibetan shell trumpet and a Nigerian talking drum. At the time, Darwin's ideas of evolution were spreading into many areas of cultural theory, and these instruments probably served to demonstrate the forms from which it was believed their Western equivalents had evolved. Today, musical instrument collectors are much more interested in cultural context and seek to record the functions that instruments play in the cultures from which they come. Sadly, little such information accompanies the non-Western instruments in the Boosey & Hawkes Collection, but they remain a fascinating demonstration of the attitudes and priorities of instrument collectors in the 19th century. Wood. Manufactured circa 1880. Formerly in the Museum of instrument-makers Boosey & Hawkes. Acquired from them by the Horniman Museum in 2004.