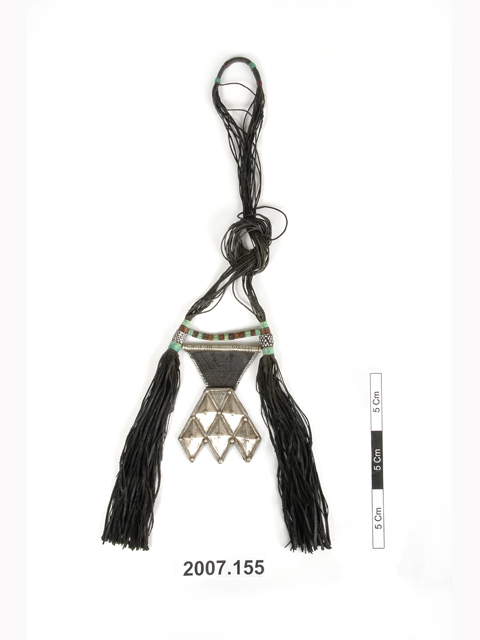 The amulet is referred to as the khomeyssa – formerly made of silver or shell--shell jewellery being reserved for the nobility--and it is an extraordinarily important amulet to wear. In Agadez and the Aïr region, Ursel Widemann who collected this piece for the Museum, has seen both men and women wearing this khomeyssa with silver--unlike the egg shell khomeyssa. Larger ones are worn by men, smaller versions by women. Five diamond or rhombus shaped silver sheets are mounted on layered blackened leather for this amulet. Their arrangement forms a rough trapeze. The tawlulut or leather multi-stringed necklace is attached to the leather strap that forms part of the layered leather backing with a leather tassel at either side of the strap. The leather strap is in the shape of a trapeze turned upside-down, so mirroring the silver trapeze below, and the leather is embossed. The leather strings are decorated at the connection to the leather strap with interwoven reddish brown leather, white plastic strips, and alternating turquoise and red-brown leather wrapped strips, forming a parallel line above the strap. This pendant has protective qualities, which are enhanced by the five sheets, five being a magical number within the Islamic tradition. The number five is a common decorative feature in Tuareg jewellery, evoking the hand of Fatima or Khamsa, which is a powerful amulet against the evil eye, used across North Africa and into the Middle East. The amulet's collector, Ursel Widemann, was carrying out fieldwork in Agadez, Niger for her doctoral thesis on Tuareg clothing and identity. From December 2005 until January 2006, Widemann collected artifacts for the Horniman in Agadez, as the museum's agent. These artifacts formed the focus of the Horniman exhibition 'Tuareg: people of the veil' (March 2010-February 2011), for which she was project curator.