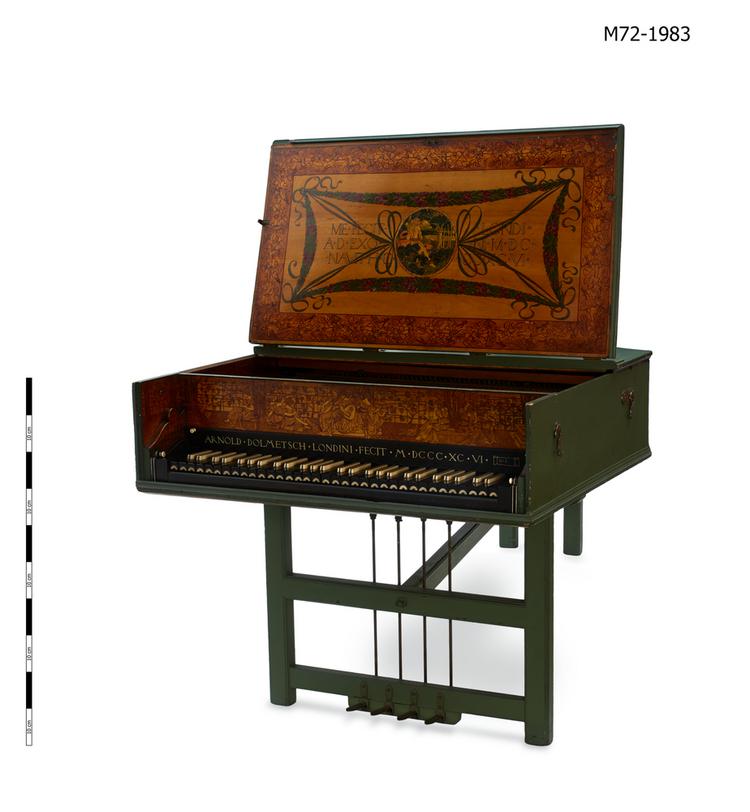 Harpsichord, single manual. The compass of the keyboard is from GG to f3 chromatic; the keyboard has arcaded ebony naturals and reversed skunk tail accidentals. two 8-foots and a buff stop. Four pedals operating from left to right, damper lifting, the front 8-foot, the back 8-foot, the buff stop (to engage the back 8-foot (longer 8-foot).The facia board and cheeks are painted in bronze red on a gilt ground with maidens seated in a garden, some playing musical instruments. The exterior of the case is painted green, its lid with brass strap hinges. The interior of the lid is painted with a circular panel featuring a boy playing the bagpipes to a maiden beside a stream; floral border. Inscription reads: In honorem. illius. omnium. musicorum praecellenissimorum principis Sebastiani Bach. The lid flap is similarly decorated with a circular plaque painted with the god Pan playing the aulos and inscription: Me fecit AD Exornavit HC Londini MDCCXCVI. The soundboard is in two halves intersected by the jacks: the upper section has a rose pierced and carved with the maker's initials, AD; the lower section with similar rose painted with flowers and scrolling ribbons and the text and music of King Henry VIII's song 'Without Dischord'. Inscription on nameboard: Arnold Dolmetsch London fecit / MDCCCXCVI No. 1. / Me fecit A.D. Exornavit H.C. Londini / MDCCCXCVI .

The Arts and Crafts movement was a counter movement to the Industrial Revolution. It rebelled against the shoddy products and ideology of mass production, including the poor working conditions imposed upon makers of factory produced goods. Arnold Dolmetsch's passion for craftsmanship and the music of the past resonated with the movement. He made this, his first harpsichord, possibly at the suggestion of William Morris, a close personal friend. It was exhibited at the Arts and Crafts Exhibition, in the New Gallery, Regent Street in October, 1896. Morris never lived to see the exhibition. The decoration is primarily by Helen Coombe assisted by Selwyn Image and Herbert Horne. The exterior decoration could not be completed for the exhibition so as a stopgap it was painted green. This was never replaced and the harpsichord was nicknamed 'The Green Harpsichord'. The harpsichord was made with only one set of 8-foot strings and a buff stop, but was significantly altered by Arnold Dolmetsch himself, in the late 1920s or early 30s and it now possesses two 8-foot sets of strings together with the buff stop. In its original condition, the instrument had two pedals and two knee levers. One of the knee levers operated a crescendo effect and the other, probably the buff stop. The pedals may have duplicated the functions of the knee levers. Another possibility is that the instrument had dampers that could be lifted independently (a feature commonly found on modern pianos) and that one of the pedals controlled this feature. The action of the harpsichord was completely changed during Arnold's intervention. In place of a more traditional harpsichord jack action with plectra being forced past the string to create the sound, he installed his patented 'New Action'. The 'new action' had no plectra or jacks. Instead, on each note, a leather pad mounted on a flexible stem was pushed up again the string, displacing it. The pusher escaped from underneath the leather pad which then abruptly let go of the string causing it to vibrate. No conventional 'pluck' of the string took place. Dolmetsch's new action was patented in 1928-29, and two more polished examples of the action exist in instruments dated 1930 (a spinet) and 1933 (a two manual harpsichord), both at Haslemere (2016). It is conceivable that the Green Harpsichord was the first instrument into which Arnold installed his new patent action. In addition to adding a second set of strings, the control mechanism for the stops was changed by Dolmetsch to the present four pedals and he also removed the bottom of the instrument.