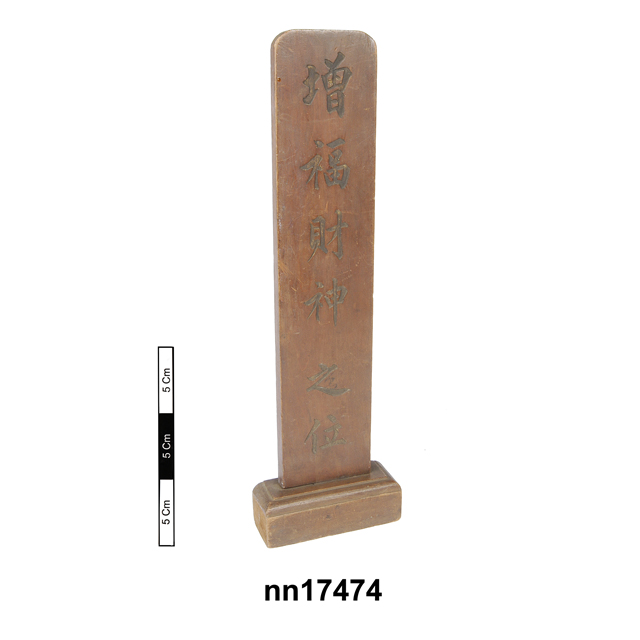 Deity tablet made of wood with an inscription carved onto either side of the tablet. The six characters on the tablet read: 增福財神之位 ‘ Zengfu Chaishen zhi wei’, which means ‘Shrine of Zengfu Chaishen, God of Wealth’. He is one of the Taoist deities, who was believed when living to have been a civil official in the Northern Wei Dynasty (A.D. 368-534), with the original name ‘Li Gui-Zu’ (in Chinese: 李詭祖). The inscription on the other side reads 赤帝真君之神位 ‘chi di zhen jun zhi shen wei ’, which means ‘Shrine of Chidi Zhenjun, God of Fire’. Also a Taoist deity, he is thought to be 祝融 ‘Zhurong’, an important personage in Chinese mythology and folk religion with the original name重黎 ‘Chongli’. In Records of the Grand Historian (in Chinese: 史記 ’Shi Ji’, a monumental history of ancient China and the world finished around 109 BC by the Han dynasty official Sima Qian), Zhurong is portrayed as a historical person, who held the governmental office of Minister of Fire.