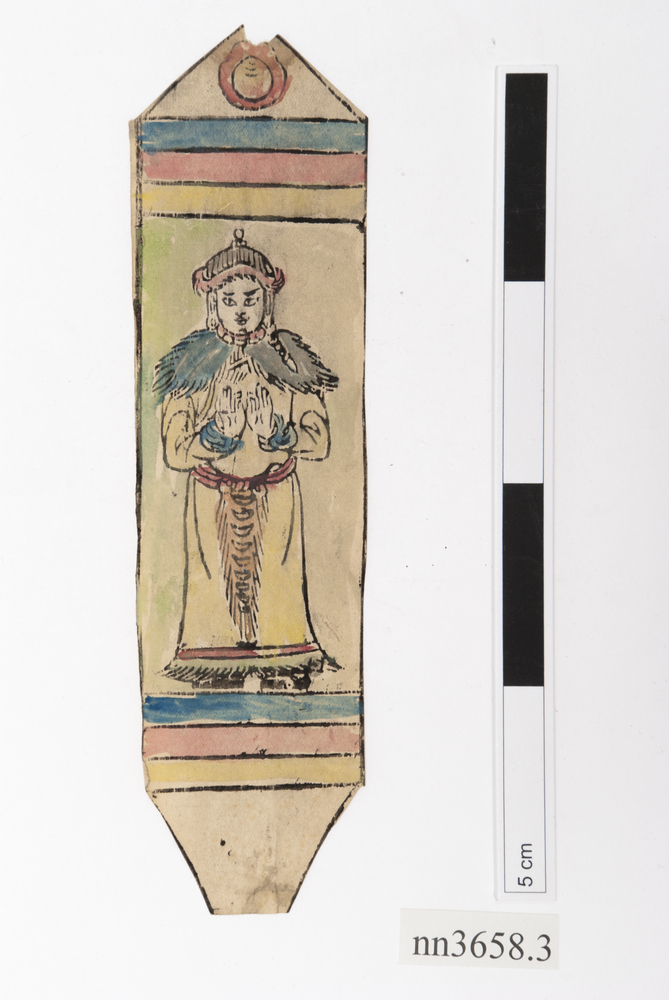 Ransom offering (glud tshabs) in the form of a ritual stake depicting a male. The man represented wears ‘male’ tiger skin apron. In the top section is a stylistic representation of the head of a vajra, also a male symbol.

This sort of ransom offering is often secured above the door of a house to symbolically repel the negative influences of spirits or demons. The male ransom is usually found together with a male ransom (see nn3658.1). The female generally holds a spindle and the male an arrow, alternatively just the arrow and spindle are used to represent male and female. The use of the arrow to denote male and the spindle to denote female is pre Buddhist in origin, in the old Bon tradition the spindle and arrow were both used as magical weapons. Ransom sticks can be understood as sacrificial, drawing a negative force towards the representation of something rather than allowing the force to continue towards the thing itself. As well as depicting the man and woman of a household, ransom sticks can also represent different members of the family, the family’s livestock and even the family’s home and possessions. Ransom sticks can also be used in conjunction with a thread cross (see nn4413). The ransoms lure evil sprits which then become entangled and trapped in the cross. Ransoms can also be modelled in dough to be used in specific rituals such as exorcisms which lure malefic spirits away from the body of the afflicted and into the ransom. The dough from which such effigies is made can include nail clippings and hair from the afflicted as well as samples of clothing worn by the same. Ransom sticks are found in Tibet, Ladakh, Zanskar, Nepal, Mustang etc…, but not so much in Sikkim and Bhutan.