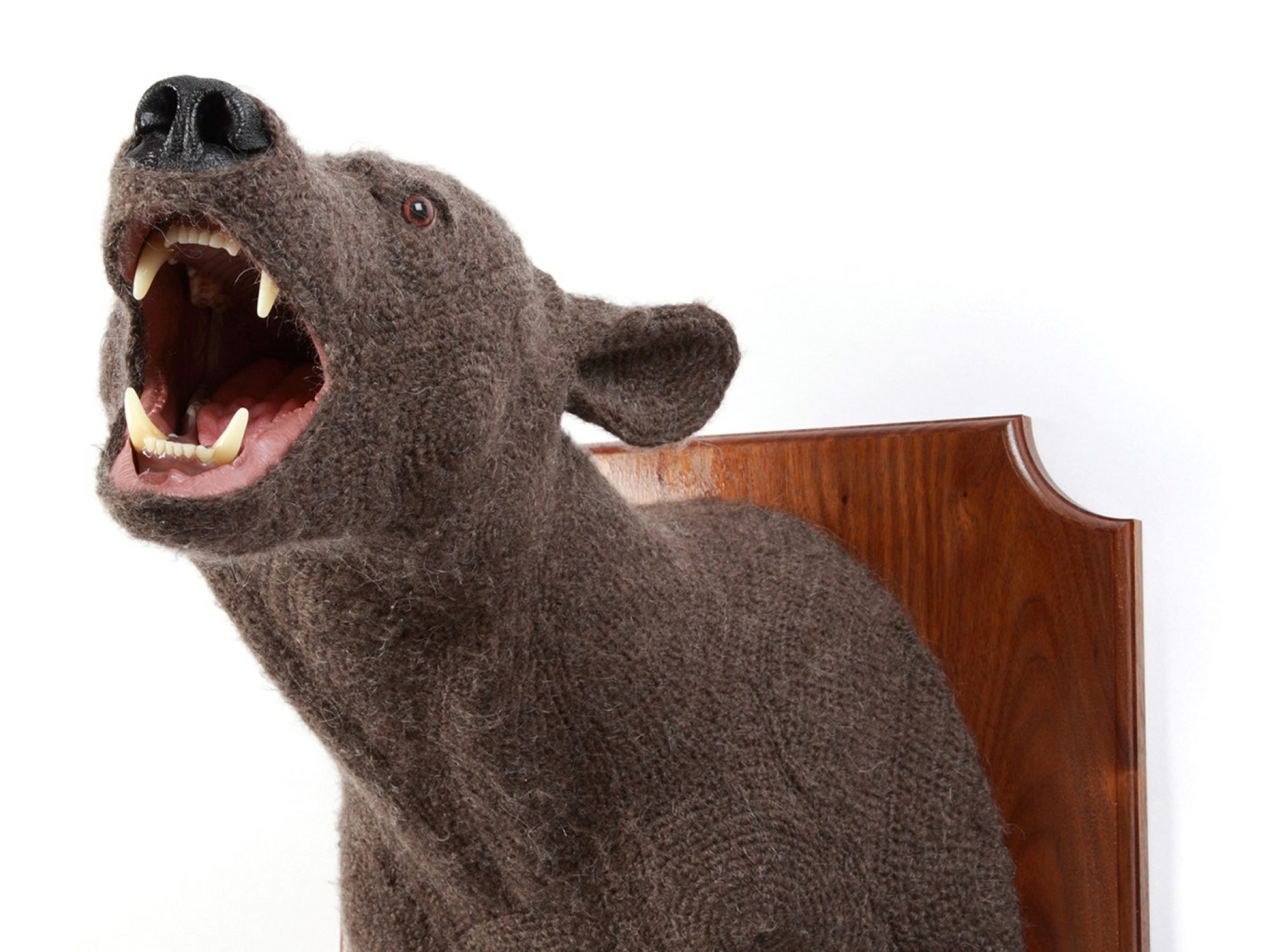 About the art Art Natural history
Artist Shauna Richardson tells us about Crochetdermy® - a technique that she developed to create life sized crochet taxidermy animals. 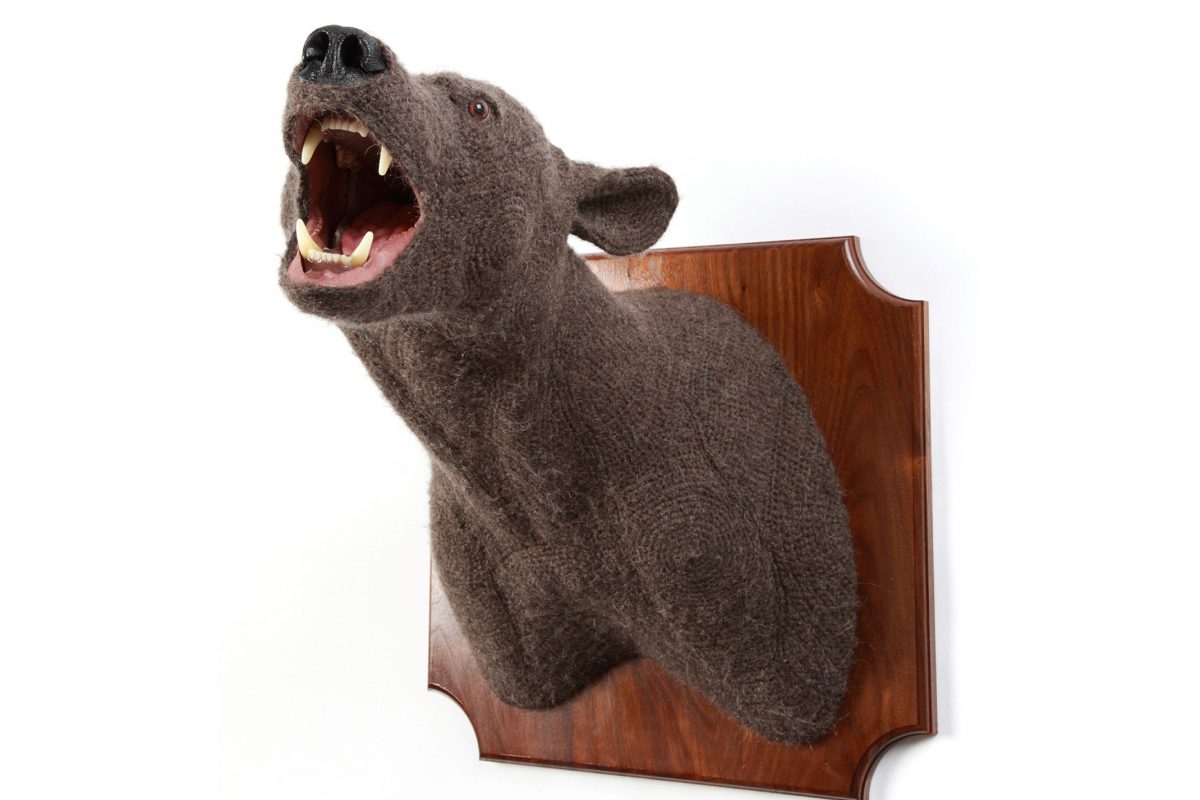 Crochetdermy® is a technique that you have created yourself. Can you tell us about the development process behind Crochetdermy® – how you came up with it and what it entails?

Crochetdermy® pieces are realistic life-size animals created using a freestyle crochet technique which I began to develop in 2007 when crochet was an endangered craft in this country.

I came up with the name Crochetdermy® both to better describe what I do and as a way of holding people’s interest. Pre coming up with the name I found that people would drift off when I introduced myself as someone who crocheted animals.

Crochetdermy® is a combination of all sorts of things, I guess it’s a mash-up of me and my life.

There are childhood pastimes such as museum visits and making things, and the adult interest in art theory, particularly in what constitutes art and perhaps more interestingly, what does not. Constant throughout there is rebellion, humour and pure devilment.

I enjoy interventions and playing with preconceptions. The first piece of Crochetdermy® I created was a 7ft brown bear which I entered into the Burnham Market Flower and Produce show in the ‘One Crochet item’ category. The memory still makes me laugh.

What inspired you to create this exhibition?

This exhibition, EVOLUTION of The Artist and The Exhibited Works, was an opportunity to display not only a selection of Crochetdermy® pieces  which demonstrate surface skills, but also with the graphs and charts – a little of what makes me tick. If there was one piece in the Horniman collection that I could cite as a source of inspiration it would be the Mendelism mice.

The exhibition includes bears, lionesses, boars, and monkeys, what drew you to these animals?

The trophies form an intervention within the existing museum display, there is something intriguing about the juxtaposition. The baboon skin is a new piece created specifically for this exhibition. Although an empty skin, the baboon reveals something of the evolution of the works,  demonstrating technique and the creation process.

How long does a piece take to make? Do you use live examples or taxidermy to help you create your work (or both)?

I have made some very large pieces. The biggest – The Lionheart Project – was made up of three 25ft lions, this took 18 months to create. More typically something like the baboon skin would take 6-8 weeks.

I use all sorts of sources for anatomy reference but by far the most referred to and most useful is my (live) Jack Russell – The Bean.

Are there any other mediums that intrigue you?

Everything intrigues me. I annoy friends, family, and not least myself with wanting to have a go at everything. One lifetime will certainly not be enough.

What impact have Natural History museums and galleries like the Horniman’s had on you and your work?

The impact that Natural History Museums have had on my work I think is plain to see. This side of my character is a bluff old traditionalist, revelling in historic hushed woody rooms full of glass cases.

How do you hope people will react to your pieces? What would you like them to think about?

My job is to make and display the pieces, people will react individually and on their own terms. Within the show there is a comment upon the status of creativity within mainstream education, it is a small gesture but secretly I would be thrilled if this were to be noticed.

What is next for you?

A large bear is about to be unveiled at the opening of a new MOXY hotel in Downtown New York. Also America bound is a metallic gold wolf skin which is to be exhibited in Excellence in Fibres! at the San Jose Museum until January 2019. Private commissions tend to keep me busy.

10am – 5:30pm
Visit the Nature Base and see hundreds of live honey…
Find out more
Display
Free

12:30pm – 4pm
Please note: The Animal Walk is closed on Saturday 13 August for…
Find out more
About the Horniman