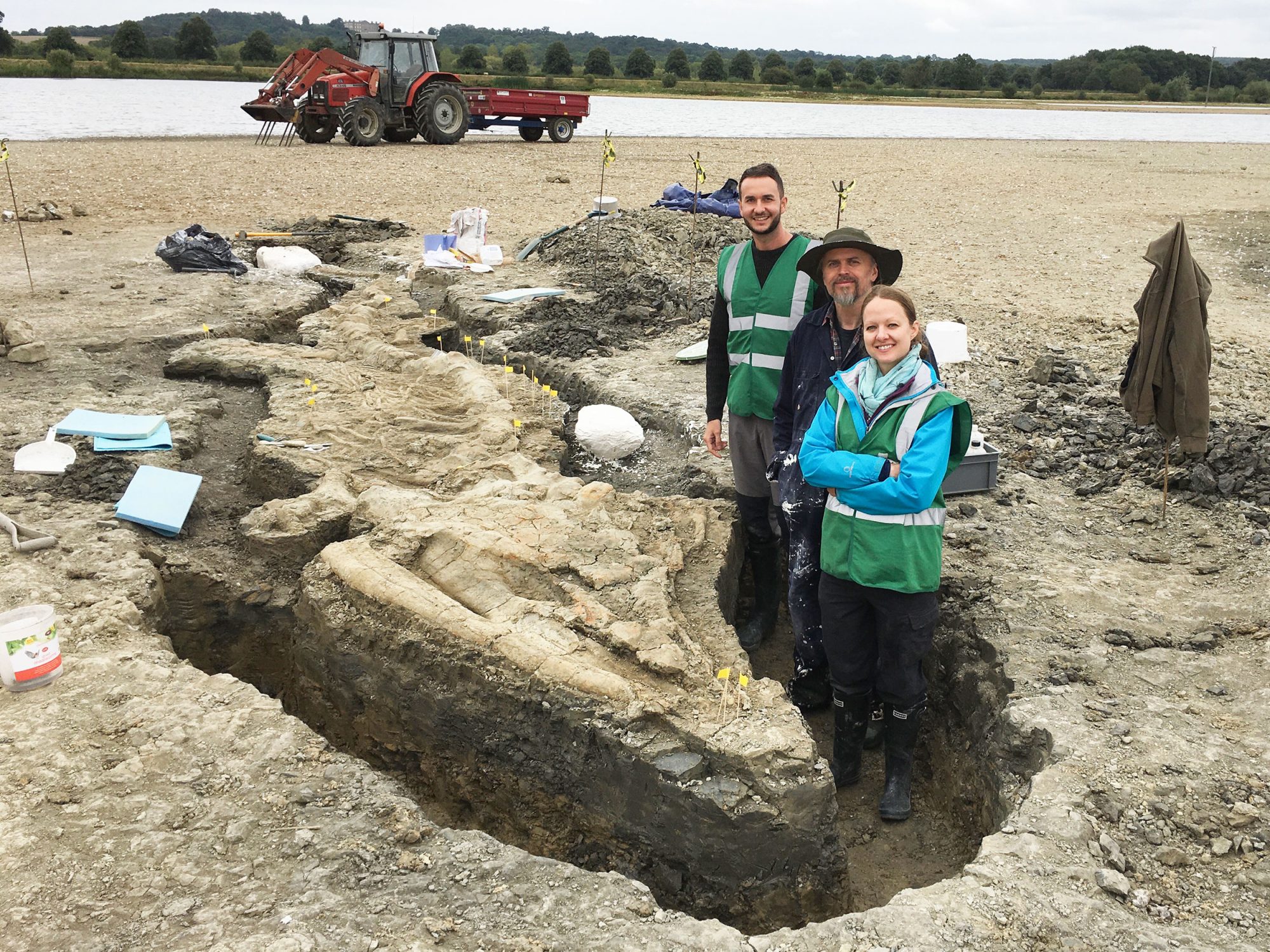 Natural history
Learn about ichthyosaurs, what we know about the exciting discovery of Temnodontosaurus in Rutland.

The recent excavation of the Rutland ichthyosaur, found by Joe Davis, was a first for Britain: the largest and most complete skeleton found to date, and possibly the first ichthyosaur of its species on these shores.

But what are ichthyosaurs? And what do we know about this one, Temnodontosaurus, and when it lived?

How do we know how old the ichthyosaur is?

The rocks in Rutland are Early Jurassic in age and belong to a rock unit called the Whitby Mudstone Formation.

The palaeontological team, led by ichthyosaur expert Dr Dean Lomax, wanted to try to pinpoint more closely when the ichthyosaur was alive and one way of doing that is to use index fossils: fossils that extensive research has shown to be easily identifiable by palaeontologists and reliably occurring within a narrow time zone (geologically speaking!). 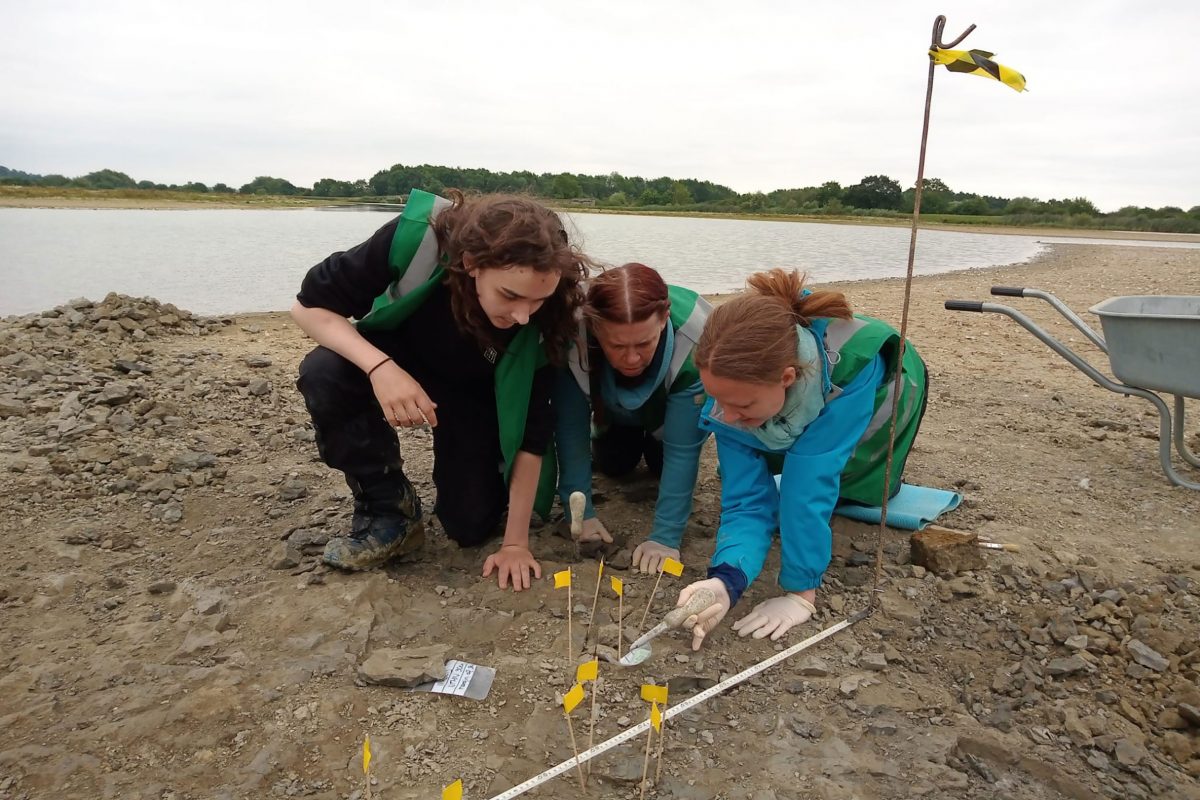 The index fossils found at Rutland Water were ammonites and belemnites. However, to decrease the error margin even further, Dr Ian Boomer, from the University of Birmingham, analysed microfossils found in the sediment from around the specimen.

This gave us an even more accurate age of between 182 and 181.5 million years old. 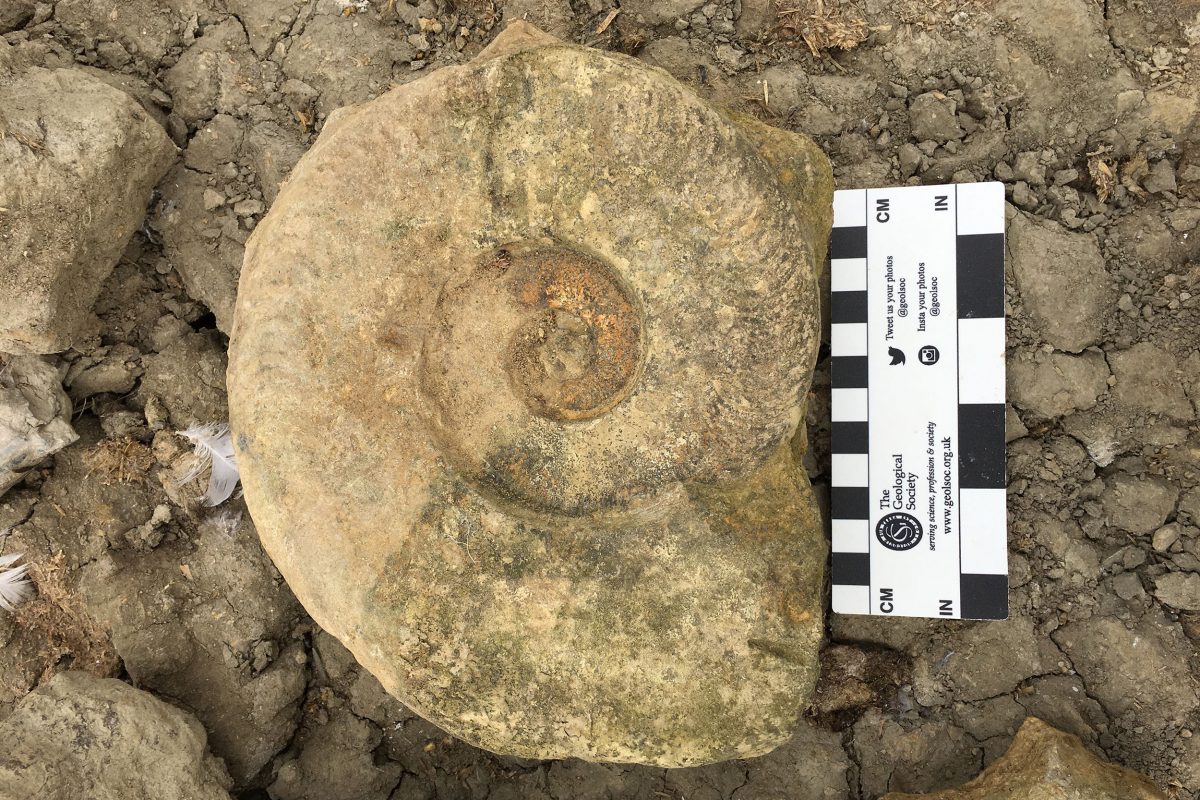 An ammonite found at Rutland Water

Is it a dinosaur?

Nope! Ichthyosaurs are not dinosaurs, though both are reptiles and they both lived in the Mesozoic Era, so I understand why they are often confused.

Dinosaurs are all terrestrial and lived on land. Ichthyosaurs are termed marine reptiles, and all of the more than 100 species of them lived in the sea. 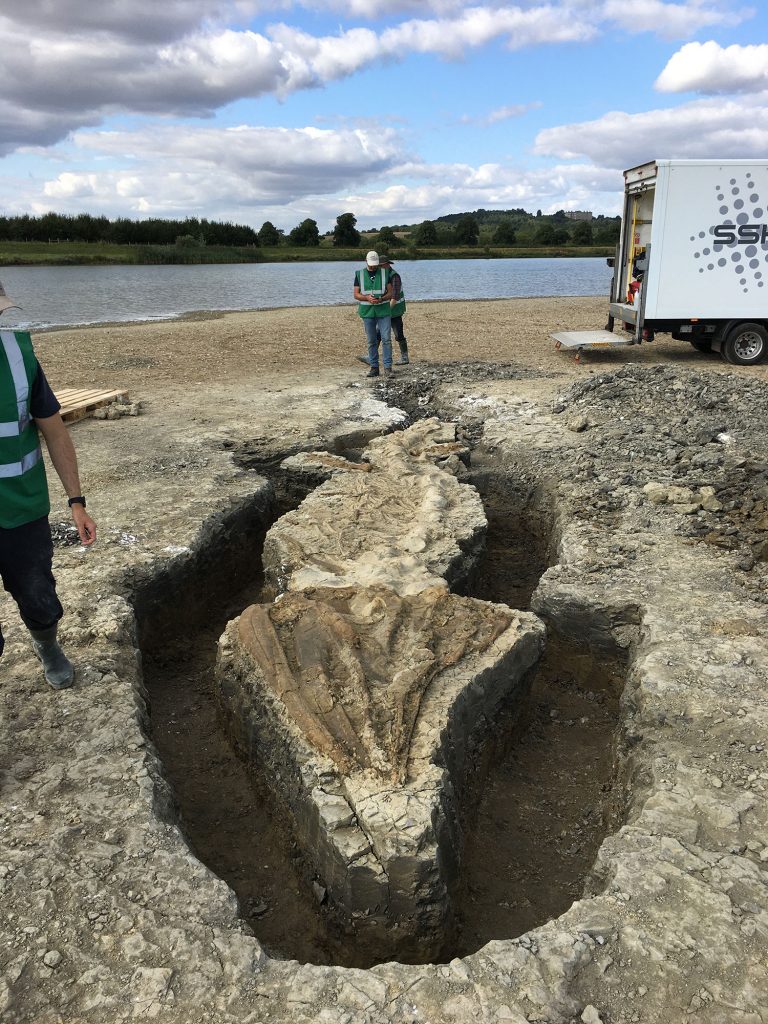 More of the ichthyosaur is revealed carefully

When did ichthyosaurs live?

Ichthyosaurs lived throughout the Mesozoic Era, which comprised the Triassic Jurassic, and Cretaceous Periods. The group evolved in the Triassic, around 250 million years ago and quickly became very diverse. However, an end-Triassic extinction event put the brakes on and their diversity decreased. Nevertheless, they remained an important part of many marine eco-systems throughout the subsequent Jurassic Period, before becoming extinct in the Late Cretaceous – about 90 million years ago.

In short – whatever it fancied! Temnodontosaurus trigonodon was an apex predator, meaning it was at the top of the food chain in the Early Jurassic seas.

It would have preyed on other marine reptiles including the long-necked plesiosaurs and yes – even other ichthyosaurs, as well fish (including sharks) and squid.

What is the largest species of ichthyosaur?

The largest known ichthyosaur species is called Shonisaurus sikanniensis, which is known from a single skeleton measuring 21 metres in length!

However, in 2018, a team led by Dr Dean Lomax described a gigantic jaw bone of an ichthyosaur found in Somerset by Paul de la Salle that possibly belonged to an ichthyosaur more than 25 metres long. As part of the research, they also identified other jawbones of giant ichthyosaurs that may have been as long or longer than a blue whale! 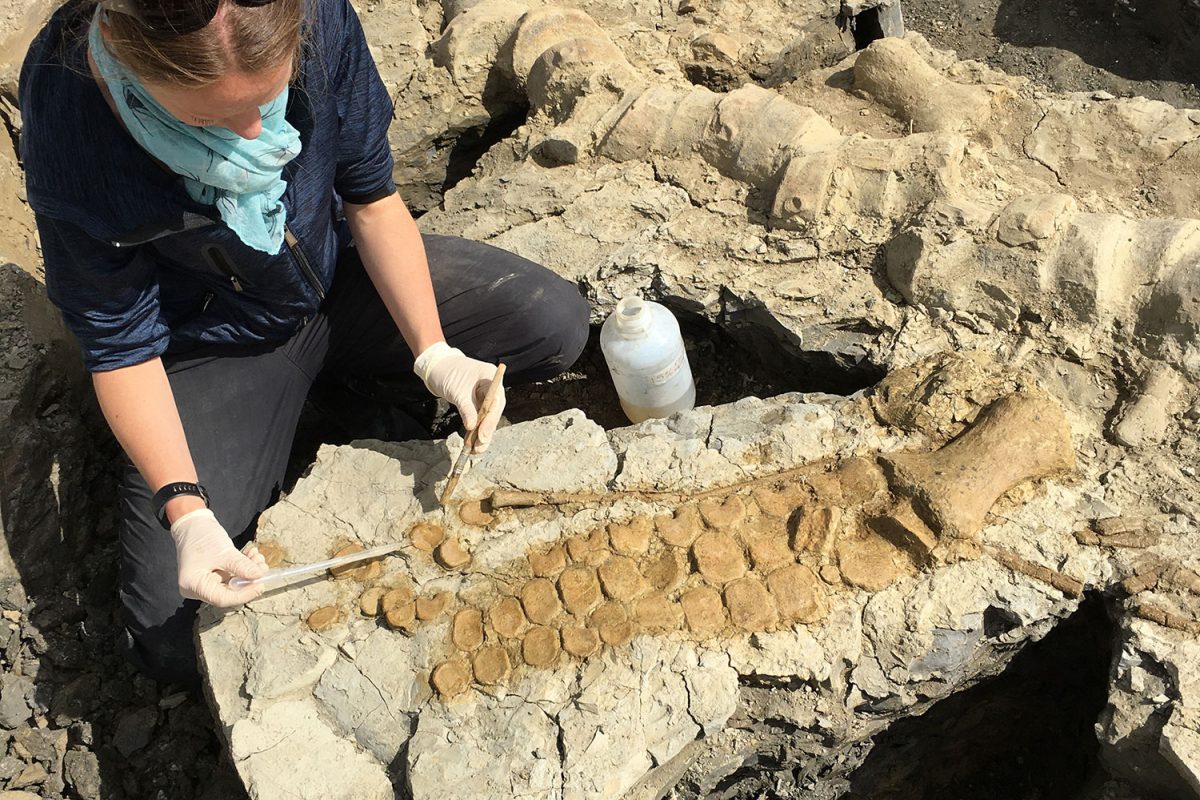 Emma applying consolidant to the hindfin to protect the specimen. "This is one of the best-preserved parts of the skeleton and was exposed by Nigel Larkin. It appears to have been scavenged." Dr Dean Lomax

Some palaeontologists thought that Shonisaurus may have been a filter-feeder, akin to the largest modern day sharks. Sharks are fish and so are not related to ichthyosaurs, but as a group they have a very similar overall body plan, which is strongly tied to diet and life habit. Thus they make a relevant comparison or, as us palaeontologists say, a useful ‘comparative analogue’ for an extinct group.

However, recent research suggests that Shonisaurus was a predator after all, making it one of the largest predatory animals to have ever lived.

Where are other ichthyosaurs found?

Ichthyosaur remains have been confirmed from every continent except Africa. They are well known from the UK, with particularly rich deposits along the Jurassic Coast in southwest England, and along the Yorkshire Coast.

The first ichthyosaur brought to the attention of science was discovered in 1811 and 1812 by Mary and Joseph Anning, in Lyme Regis, Dorset, which is along the Jurassic Coast. 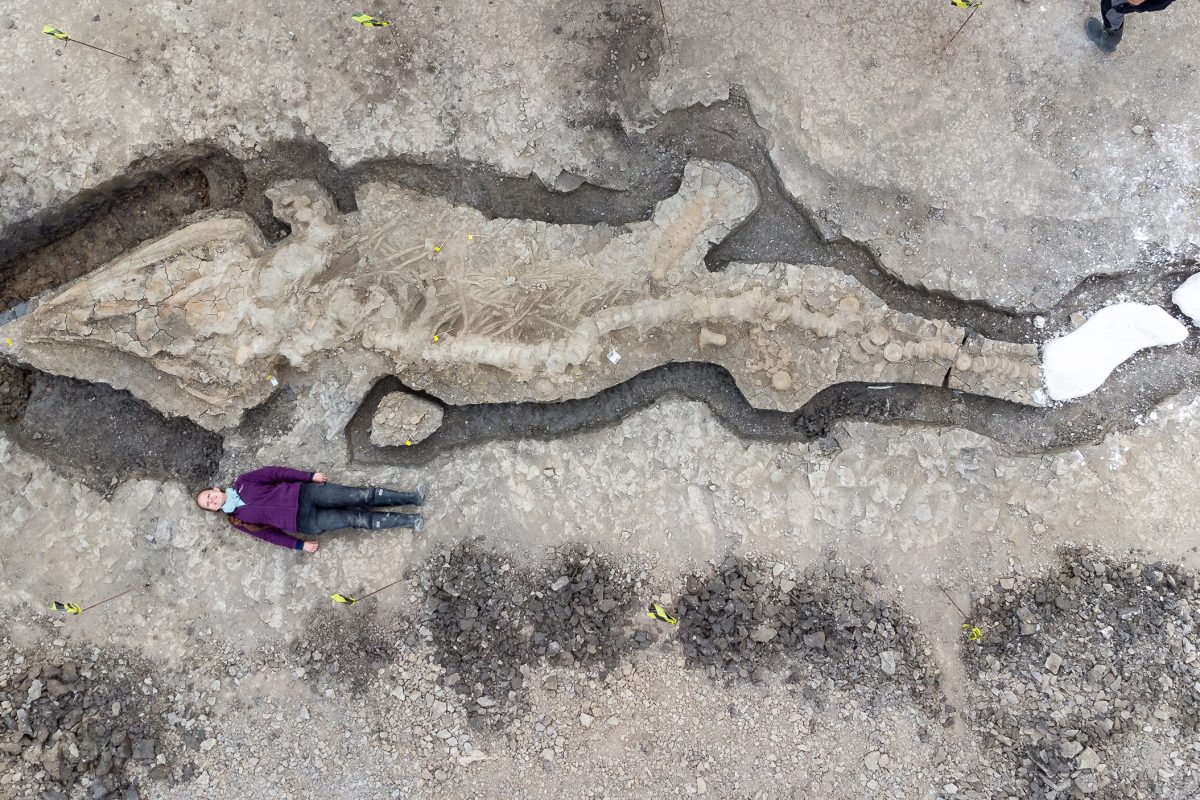 What dinosaurs lived at the same time as this ichthyosaur?

Across the world, the areas best known for Early Jurassic dinosaurs are:

There have also been Early Jurassic dinosaur fossils found in Antarctica, including one of my personal favourites; Cryolophosaurus, which means ‘frozen crested lizard’! Cryolophosaurus is one of the earliest known large-bodied meat-eating dinosaurs. 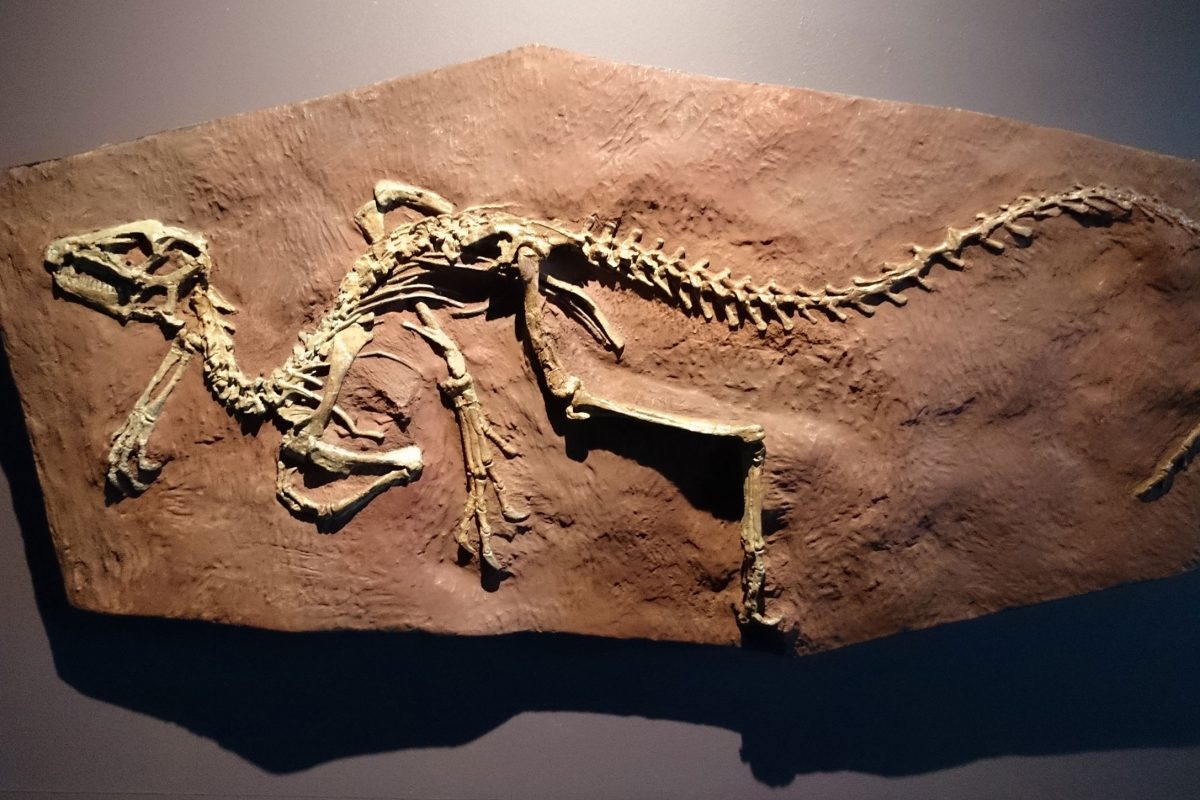 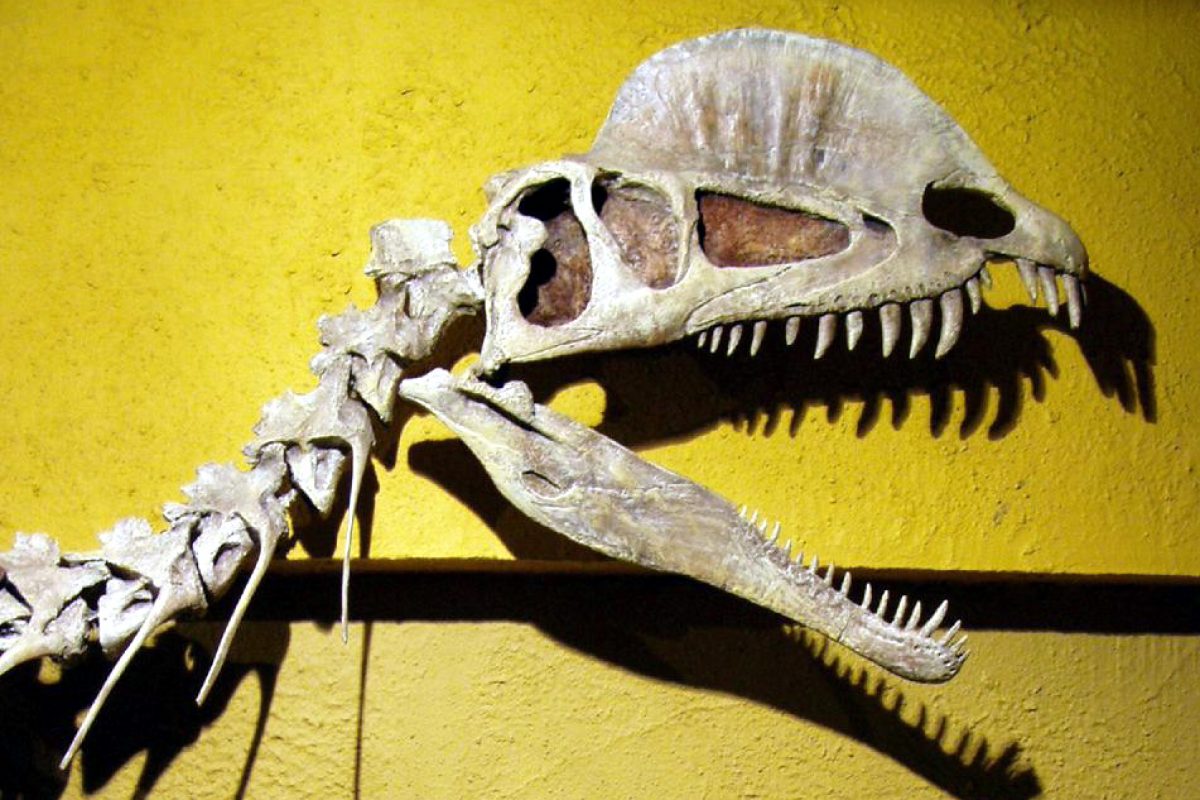 What Early Jurassic dinosaurs are known from the UK?

Much of the UK was underwater during the Early Jurassic, which didn’t make it a good home for terrestrial, land-dwelling animals like dinosaurs. However, there have been a few remains found here.

One of the most famous is Scelidosaurus; a four-legged herbivore with bony protrusions called osteoderms along its back, neck and limbs. Its claim to fame is that it was the first almost complete articulated dinosaur to have ever been found, anywhere in the world.

There are also some bipedal predators, called theropods, though most are known from very fragmentary material, with the exception of the better known coelophysoid dinosaur Sarcosaurus.

Going back to Rutland, where our ichthyosaur Temnodontosaurus was found, there is also the ‘Rutland dinosaur.’ This is a Cetiosaurus, a type of sauropod, that was found in a quarry near Rutland in 1968. However, it lived a bit later than the Rutland ichthyosaur, at around 168 million years ago, in the Mid Jurassic.

Incredibly, our ichthyosaur would already have been a fossil, by the time this dinosaur walked the earth! 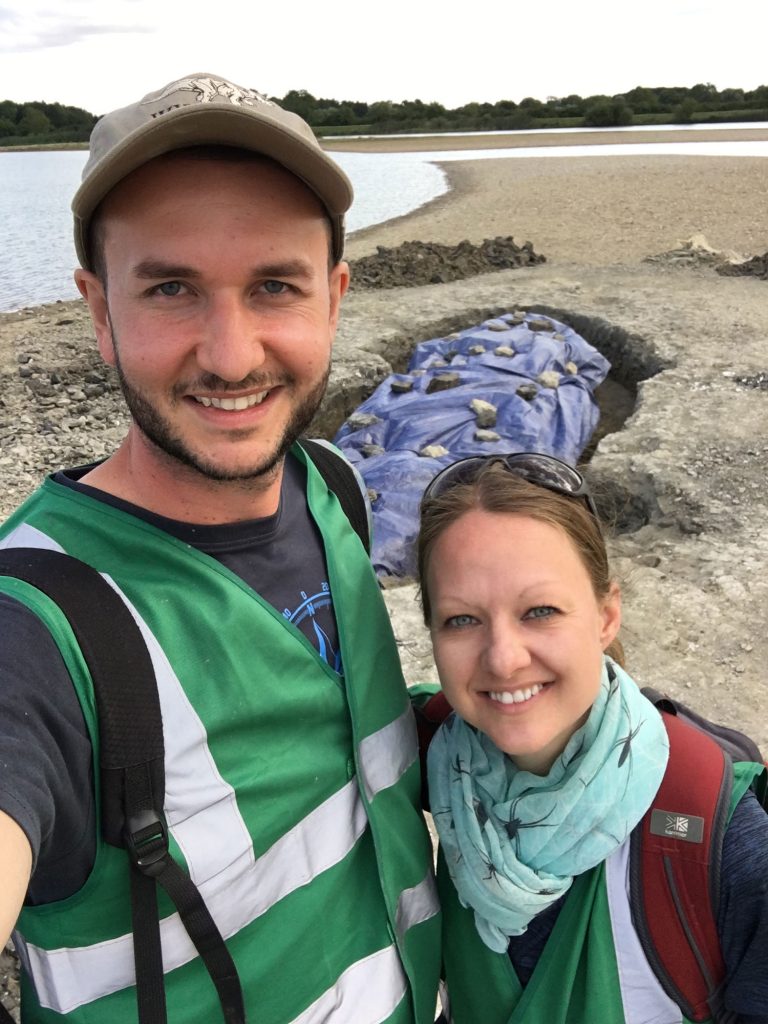 Emma with Dr Dean Lomax, who lead the project

With thanks to Dr Dean Lomax, world ichthyosaur expert and Rutland excavation Team Leader, for his input to this article.

The fossilised remains of an ichthyosaur – known as the 'Rutland Sea Dragon' – are Britain’s largest and most complete skeleton found to date.

Reptiles, Representation and the Role of Hollywood Royalty