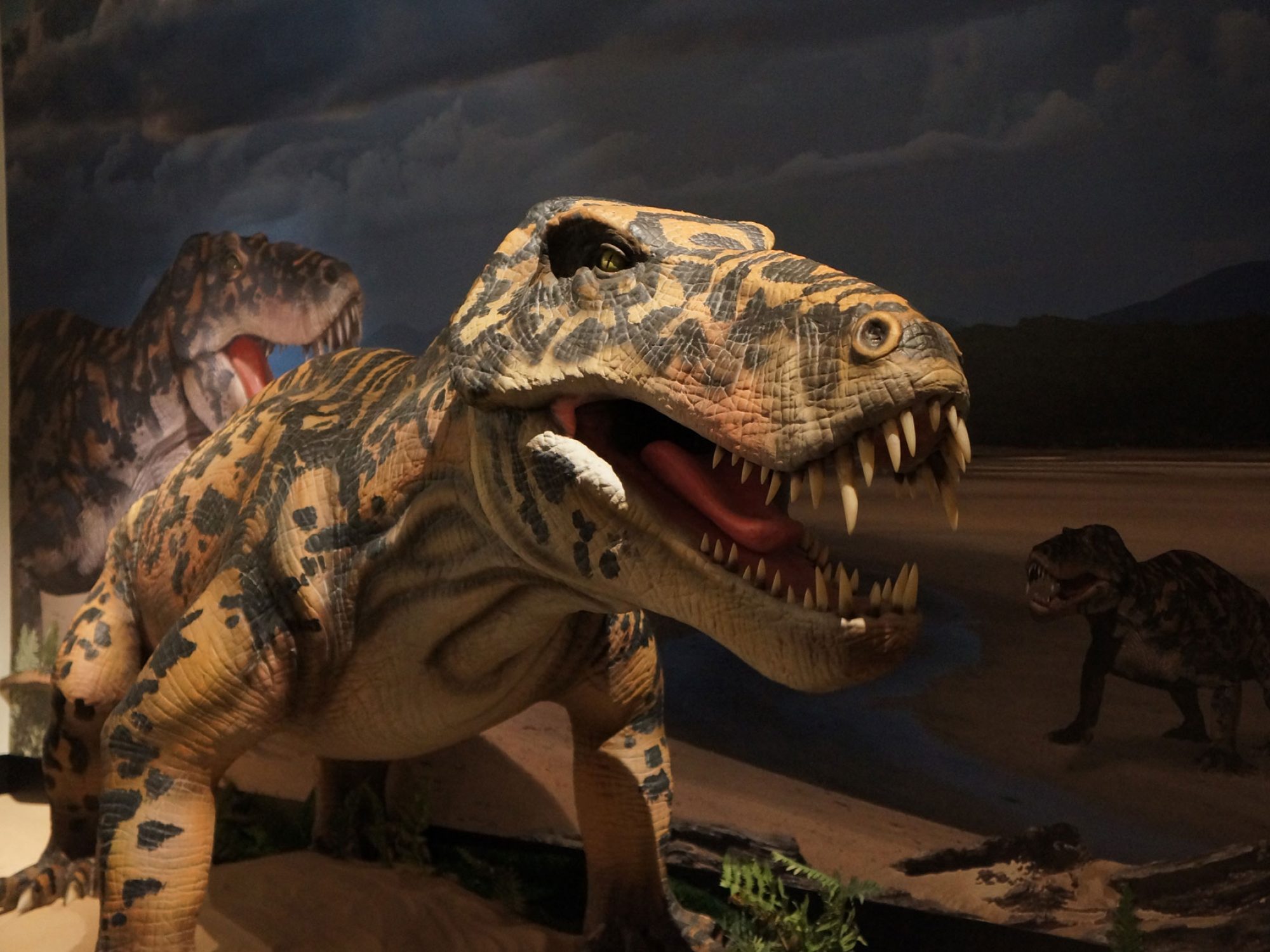 Exhibitions Natural history
Deputy Keeper of Natural History Dr Emma Nicholls explains how the Dimetrodon is not as far from humans as you might think.

Scientific research is one of the most exciting fields that you can work in – not that I’m biased. New discoveries can happen at any time and change what we thought we knew.

Although some things won’t change, like the direction of Earth’s gravity, or the fact that molten rock would melt your skin, ongoing research in fields such as palaeontology mean we are constantly honing our understanding of the plethora of plants and animals that populate the fossil record.

Turning things on their head

The hypothesis that birds evolved from dinosaurs has in some ways been a very slow burn.

In 1861, the fossil uber-megastar Archaeopteryx (Ark-ee-op-ter-ix) was discovered in Germany and immediately soared* into the history books. Archaeopteryx was originally described by Sir Richard Owen, the biologist who campaigned for the natural history specimens in the British Museum’s collection to be given their own home, leading to the establishment of the Natural History Museum in London.

However, it was anatomist Thomas Henry Huxley who used the reptilian characteristics of the otherwise birdlike Archaeopteryx to put forward the idea that birds and dinosaurs were related. Huxley also noted several birdlike characteristics in many dinosaurs, further tipping the scales.

However, evolution was a contentious issue in the 1860s. Darwin’s ‘off-the-wall’ theory of evolution was published in On the Origin of Species in 1859 and had gone down like a lead balloon with numerous (though not all) scholars.

As far as I can see, the biggest issue was purely the human superiority complex – their belief that humans couldn’t possibly have evolved from animals. Perhaps the nay-sayers had too much influence on science and society for there to be a balanced debate. Despite Archaeopteryx’s best efforts at showing off its mish-mash of bird and reptile characteristics, the ‘birds evolved from dinosaurs’ debate was far from over. 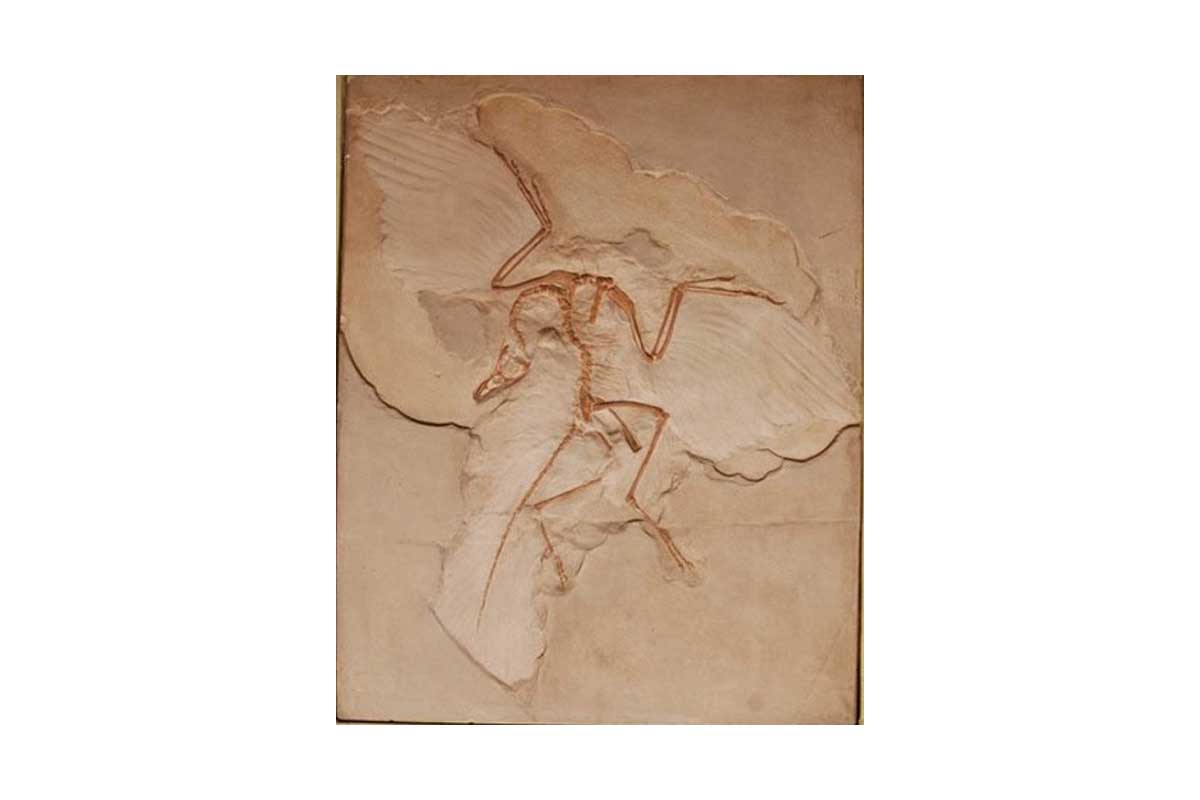 Archaeopteryx cast in the handling collection

An entire century later, in the 1960s, palaeontologist John Ostrom threw a hefty log on the fire by pointing out numerous birdlike characteristics in the dinosaur Deinonychus.

This was backed up by research carried out by his student Bob Bakker (for the Jurassic Park fans – ‘and I read this other book… by a guy named Bakker…’) and Peter Galton. And when the Dinobirds from China exploded onto the scene in the 1990s, they left little in the way of conjecture.

Dinobirds is a term used for dinosaurs that have bird-like characteristics, i.e. dinosaurs evolutionarily on their way to becoming birds.

There were cries of fakes, forgeries, and misinterpretations, but with feathered dinosaur fossils coming out of the rocks thick and fast (in research terms), the evidence was piling up.

I started as a geology undergraduate in 2001 and almost immediately started attending academic conferences on palaeontology (unusual for undergrads at the time, now more of an expectation).

It was early enough in the whirlwind of academic discussion around Dinobirds from China that I remember them still being discussed in earnest.

The dinobird Sinosauropteryx (sigh – no – sore – op – te – rix) wins many accolades. Not only is its name the most delightful word to say in the palaeontological dictionary, but also this species was the first known dinosaur (non-bird) that was unequivocally feathered. This solidifies the hypothesis that feathers had been present in dinosaurs before birds.

It also meant that the embers of the debate that Ostrom, Bakker and Galton had prodded in the 1960s and 1970s were now ablaze with gigantic flames and pluming ash-clouds… birds are dinosaurs. 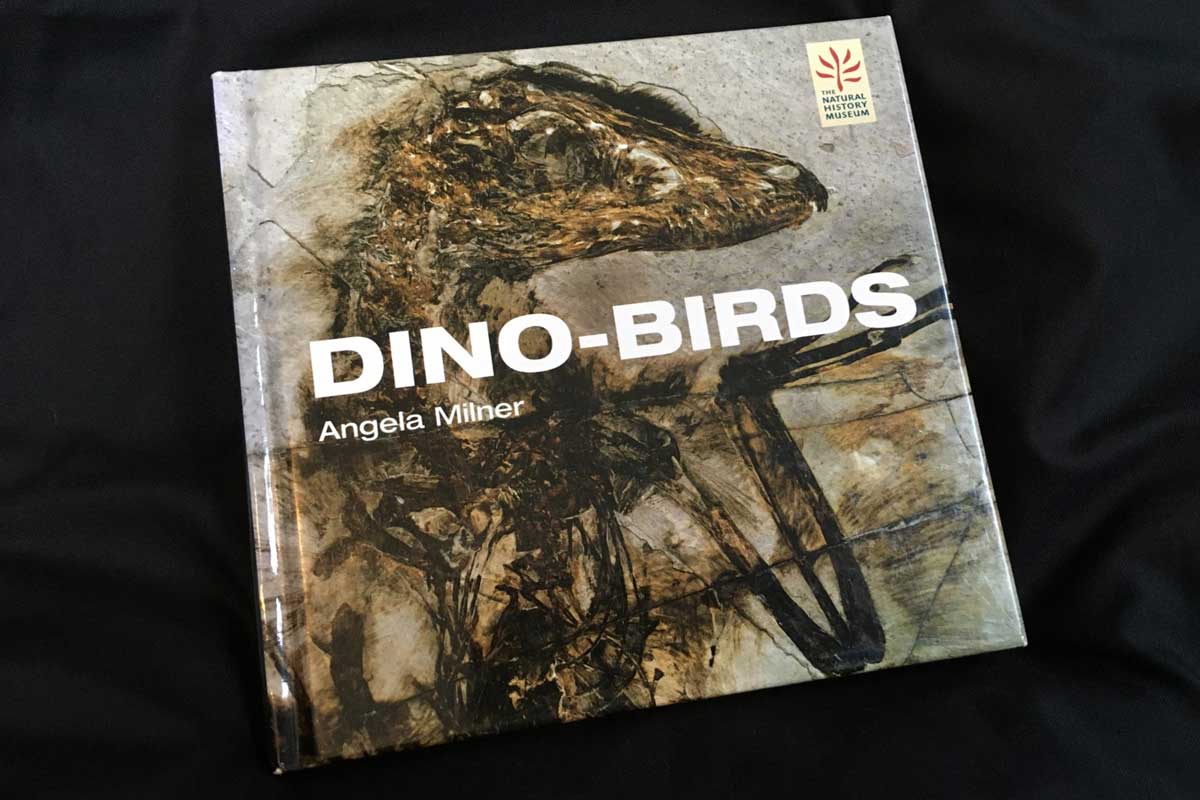 For the Archaeopteryx fans, this famous animal may have been discovered 135 years before Sinosauropteryx, but Archaeopteryx is well on its way (evolutionarily speaking) to being a bird rather than a dinosaur. Therefore it was more instrumental in connecting birds to dinosaurs than in answering whether dinosaurs had feathers.

Sinosauropteryx was the icing on the cake, or the nail in the coffin, depending on how thrilled you were that these groups belong together.

Sinosauropteryx is also the first dinosaur for which we know anything about its feather colour. They were a very attractive ginger, with a ginger and white striped tail – I could tell you more about dinosaur colour but that is a whole other article.

Meanwhile, what have the mammals been doing?

Mammals have also had their fair share of evolutionary re-writes, and a perfect segue from dinosaurs to mammals is the famous Dimetrodon (die-meh-tro-don).

If I open any of my dinosaur books from when I was a child in the 1980s, there the impressively-sailed Dimetrodon will be, staring back at me amongst its reptilian counterparts.

In case you were also a child around the same time or for any other reason haven’t yet availed yourself of the recent phylogenetic literature… I suggest you sit down before carrying on to the next sentence.

We now know that Dimetrodon was NOT a dinosaur. It’s not even a reptile. I know, I’m sorry. 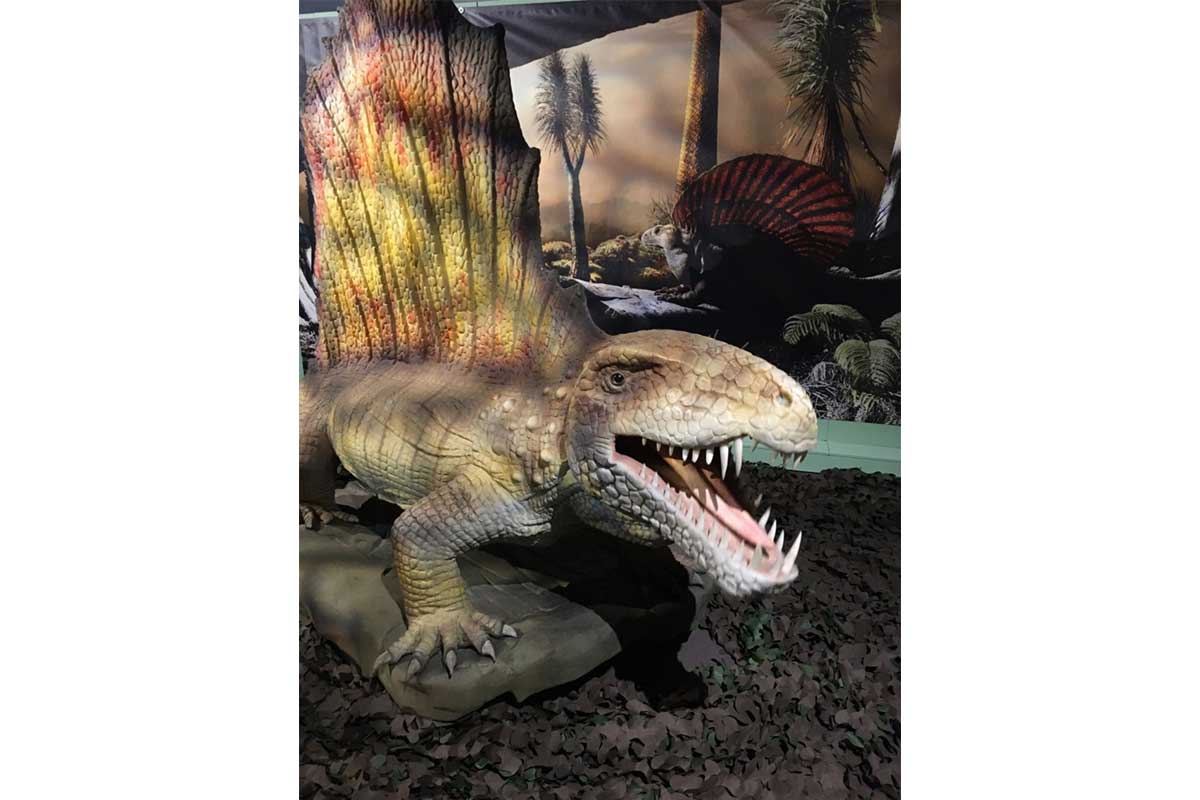 Dimetrodon belongs in the group called Synapsida, one branch of which evolved into mammals as we know them.

Dimetrodon was actually on a dead-end branch of synapsids called the pelycosaurs. These are known for having a (geologically) brief foray into coping with heat regulation** via the erection of a dorsal fin, that to look at makes one feel they would have been particularly skilled at kite surfing.

Not every species had a sail but it’s rare to see a pelycosaur pin-up without one in a book of prehistoric animals.

The term ‘dead-end’ branch here, is really rather underselling this incredibly successful and diverse group, which persisted for over 70 million years, from the Carboniferous to the end-Permian mass extinction 252 million years ago.

In fact, at the beginning of the Permian Period (299 million years ago) the pelycosaurs were Earth’s most dominant carnivores. I say dead-end simply because pelycosaurs are now entirely extinct as a group; there are no known descendants. They’re gone.

2020 saw the Horniman Museum and Gardens host the incredible Permian Monsters: Life Before the Dinosaurs exhibition, from the equally incredible Gondwana Studios.

When the exhibition was put together, it incorporated the most up-to-date scientific knowledge which, at the time, meant that Dimetrodon and its synapsid friends were described as mammal-like reptiles. Synapsids have only recently started to be better understood and – after a brief foray into being seen as reptile-like mammals rather than mammal-like reptiles (think about it) – they have now been declared distinct from both. They are their own beasts.

In fact, as alluded to previously, one branch of synapsids gave rise to modern mammals, so you could argue that Dimetrodon is more closely related to you and me than to dinosaurs.

The scientific content of the Permian Monsters exhibition was then updated, a project that it was my great pleasure to be heavily involved with. 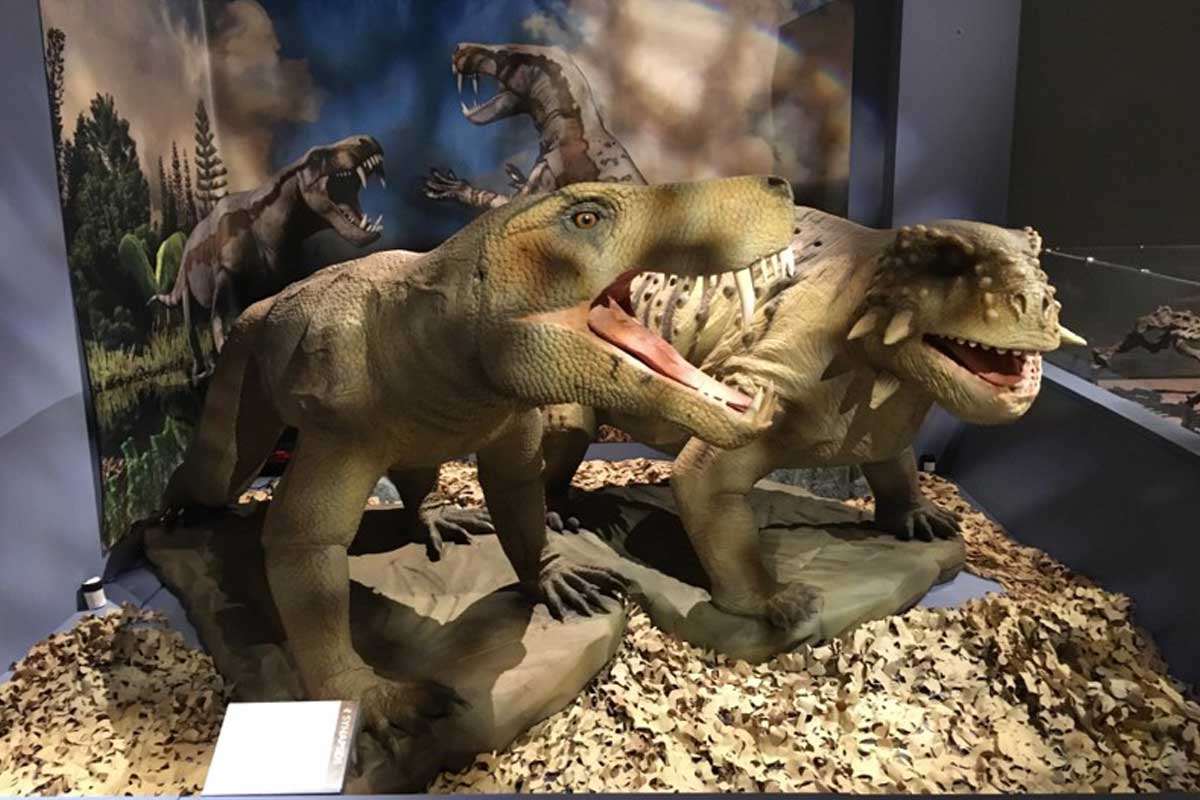 Scientific discoveries are always a good thing, no matter how annoying it can be when you have to go back and re-write some book chapter you were about to publish or text for an exhibition panel you’d finally ticked off. But they are also what makes being a palaeontologist (for example) so exciting!

* Not everything with feathers can take to the sky, but it seems relatively certain that Archaeopteryx was capable of powered flight

** This is currently the most accepted reason for the sail, but some scientists have pointed out that as some Dimetrodon species were small with large sails, whilst other species were large with small sails, thermoregulation is probably a red herring and it is more likely they were used simply for displaying to each other. The debate continues.

What are the Permian Monsters?

What are the creatures that were around in the Permian period? We have a look at synapsids with Deputy Keeper of Natural History, Dr Emma Nicholls.

Become a member of the Horniman and enjoy a year of inspiration, surprise and enjoyment at our wonderful Museum and Gardens.
Find out more
Display
Free

10am – 5:30pm
Our Natural History Gallery first opened in 1901. The design was influenced…
Find out more
About the Horniman