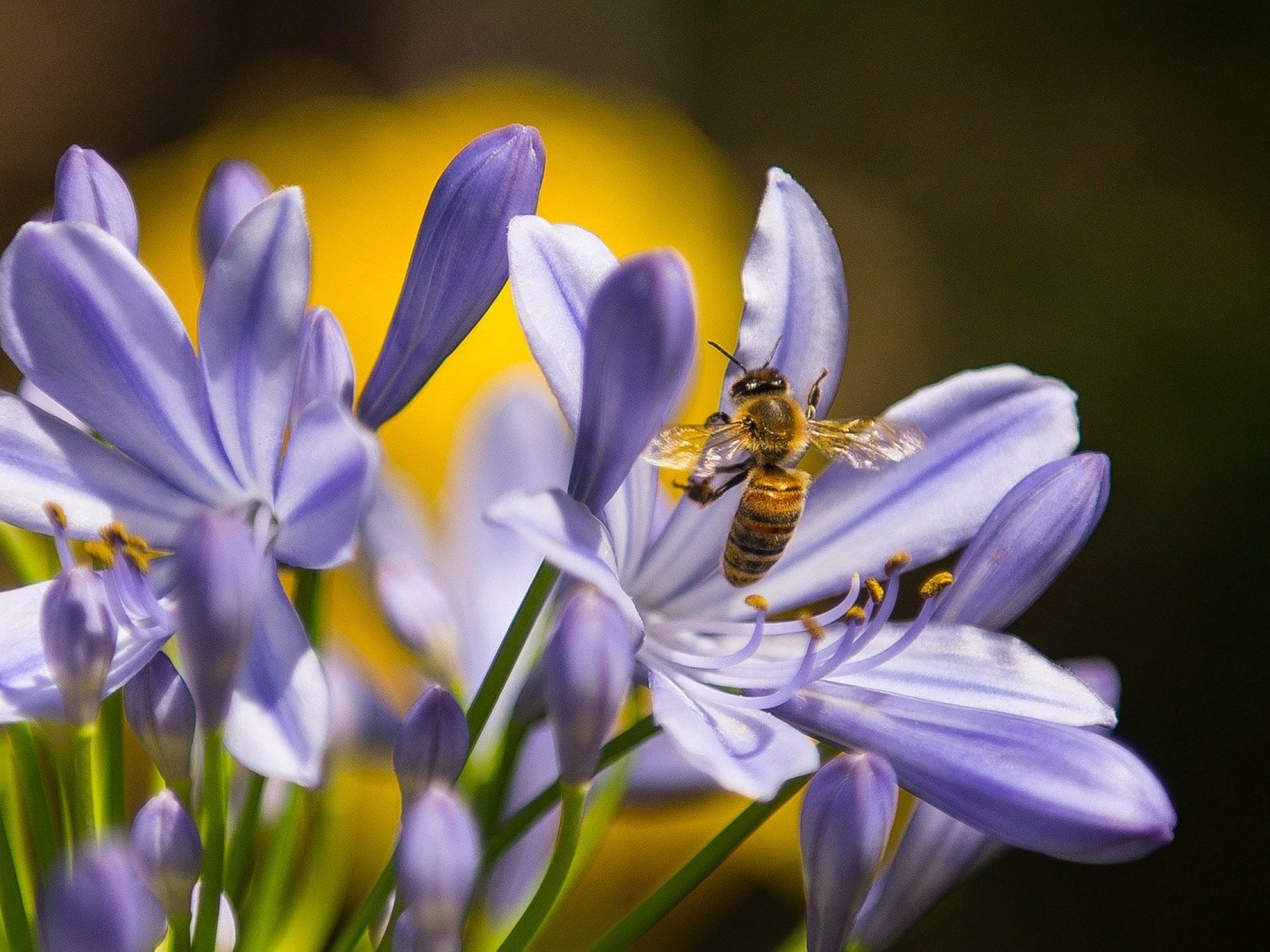 Archives History Library Natural history Women
Inspired by our a discovery by our Librarian, we have a look at some of women who gave lectures here in the early days of the Horniman.

Our Librarian Henry Rowsell recently uncovered an interesting fact about the Horniman as part of #NHEphemera.

The Horniman used to host lectures from visiting experts, as well as our own curators, up until the 1980s. The records show that we had a few well known women lecture, which was (according to author Kate Hill) unusual for the time.

Although women could undertake the public role of lecturing to a mixed-gender audience, they rarely did so, and those who did so had, or were in the process of developing, the professional authority to be able to speak publicly.

Moreover, it may be significant that of the museums studied here, only the Horniman recorded women delivering lectures, and these were all in its Saturday afternoon popular lecture series.
Kate Hill

In fact, the women we talk about below featured in both Saturday and Sunday lectures, in the morning and evening, repeated three times on Sunday evenings alone. Rather wonderfully, the Sunday afternoon lectures were repeated “to reduce the amount of aimless loafing in the Museum” by visitors during that time.

So who were some of these lecturers, and why were they invited to speak?

Many will know her name from the Marie Stopes family planning clinics, but Stopes’ original work focused on botany and geology.

Stopes graduated from University College, London with a first class B.Sc. after only two years by attending both day and night schools.

She continued racking up firsts, becoming one of the first women to be elected a fellow of the Linnean Society and the first female academic at the University of Manchester, as a lecturer of Palaeobotany (although they later tried to rescind the offer when they realised she was a woman). She took up postgraduate work in Munich in 1903 and became the only woman amongst 500 men, and in 1904 Stopes achieved her doctorate on cycads seed structure and function. She was the youngest person in Britain to earn a DSc in 1905.

In 1907, Stopes was sent on an 18-month expedition to Japan by the Royal Society. Charles Darwin wrote about flowers being an “an abominable mystery” as the earliest samples in the fossil record all dated back to around 100 million years ago in various forms, suggesting an explosion of diversity. This was the mystery that Stopes intended to shed light on.

In her journal she wrote:

August 24th: Really it is hard work to carry tents and everything along these rivers. Often I alone find it difficult to go, and I have nothing to carry – except my fan and hammer, both of which are in constant use. 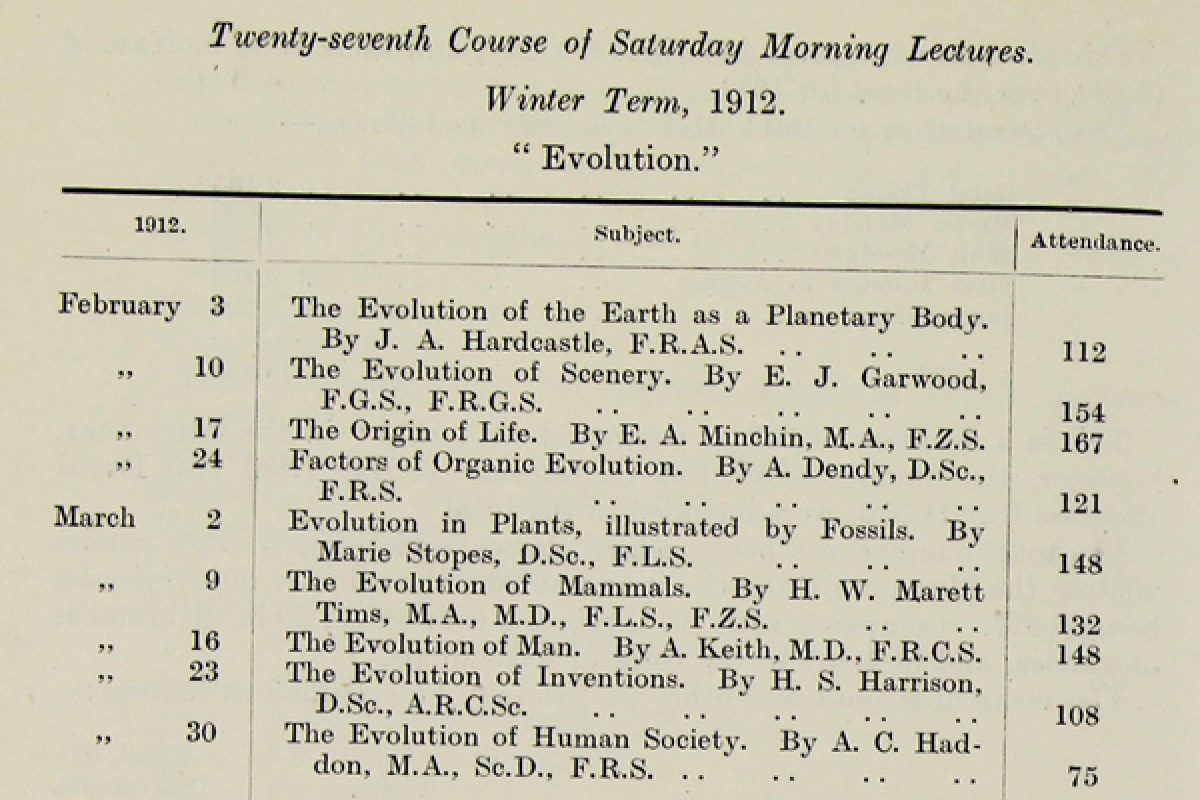 Marie Stopes, mentioned in our records, talking about plants from the fossil record

Her work on angiosperms from Hokkaido, Japan provided vital evidence which proved to be, at the time, the oldest flowers discovered.

Stopes’ Lecture at the Horniman on 2 March in 1912 “Evolution in Plants, illustrated by Fossils” would have doubtless drawn from her experience in Hokkaido.

Women’s history, like all history, is very complicated. Marie Stropes is an example of a figure whose work enabled and empowered some, but was dangerous and exclusionary to many others.

Marie Stopes was a supporter of Hitler, and was an advocate of eugenics and sterilization. Although the creation of her birth control clinic in south London gave greater reproductive control to women, Stopes’ ideas about birth control and sterilisation were informed by homophobic, anti-Semitic and racist ideas, as well as her prejudice against the disabled and working classes.

Kate Hall was the Curator of the Whitechapel (or Borough of Stepney) Museum from 1895 until 1909 – the first paid female curator in the country, according to Kate Hill.

Hall was a protégé of Henrietta Barnett. Barnett who, along with her husband, established The Whitechapel Library and Toynbee Hall, as a way of educating working-class people in London’ East End. A room was given on the second floor to serve as the Whitechapel Museum, which housed natural history specimens collected by Rev. Dan Greatorex. 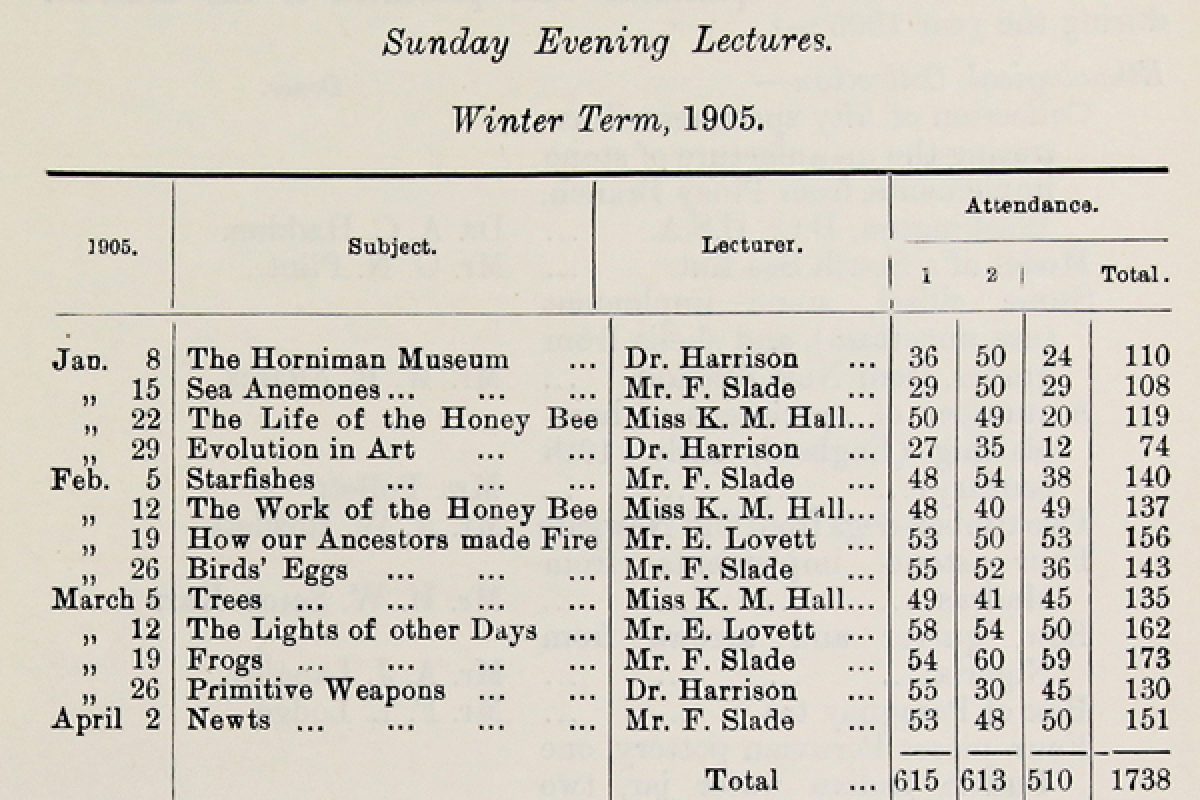 During this time, Hall founded the Nature Study Museum which opened in 1904, containing living specimens, taxidermy and insects, as well as a beehive with glass walls, all of which sound very similar to the Horniman today.

The intention of the Nature Study Museum was to give city people the opportunity to encounter live animals, and who may have otherwise not had this opportunity. Over 100,000 people visited in two years.

The lectures Hall gave at the Horniman in January, February and March 1905 drew on her knowledge as part of the Nature Study Museum. The first two talks were, “The life of the honey bee” on 22 January and “The work of the honey bee” on 12 February, with an enigmatically titled lecture: “Trees” following on 5 March. According to St George-in-the-East Church, the bees in the Nature Study Museum had local fame so it is little wonder that they were the subject of Hall’s lectures.

According to the Survey of London, Hall was innovative when it came to education, providing a carefully planned syllabus prior to the school visit. She also created a handling collection of natural specimens which were changed weekly and around 400 children visited for nature-study lessons at the museum each week in 1907.

Sadly, the Nature Study Museum closed at the outbreak of the Second World War.

Dr Ellen Marion Delf-Smith, as she was later known, went to school down the road from the Horniman at James Allen’s Girls’ School in Dulwich, studied natural sciences at Girton College, Cambridge and went on to a post at Westfield College, University of London teaching botany.

According to her obituary in the British Phycological Journal, Delf-Smith had very few facilities or help when she first took up her teaching post and, “if she wanted a specimen she had to go out and collect it and prepare it herself.” 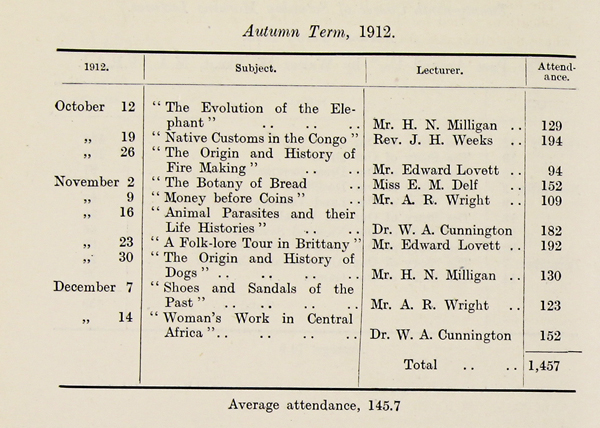 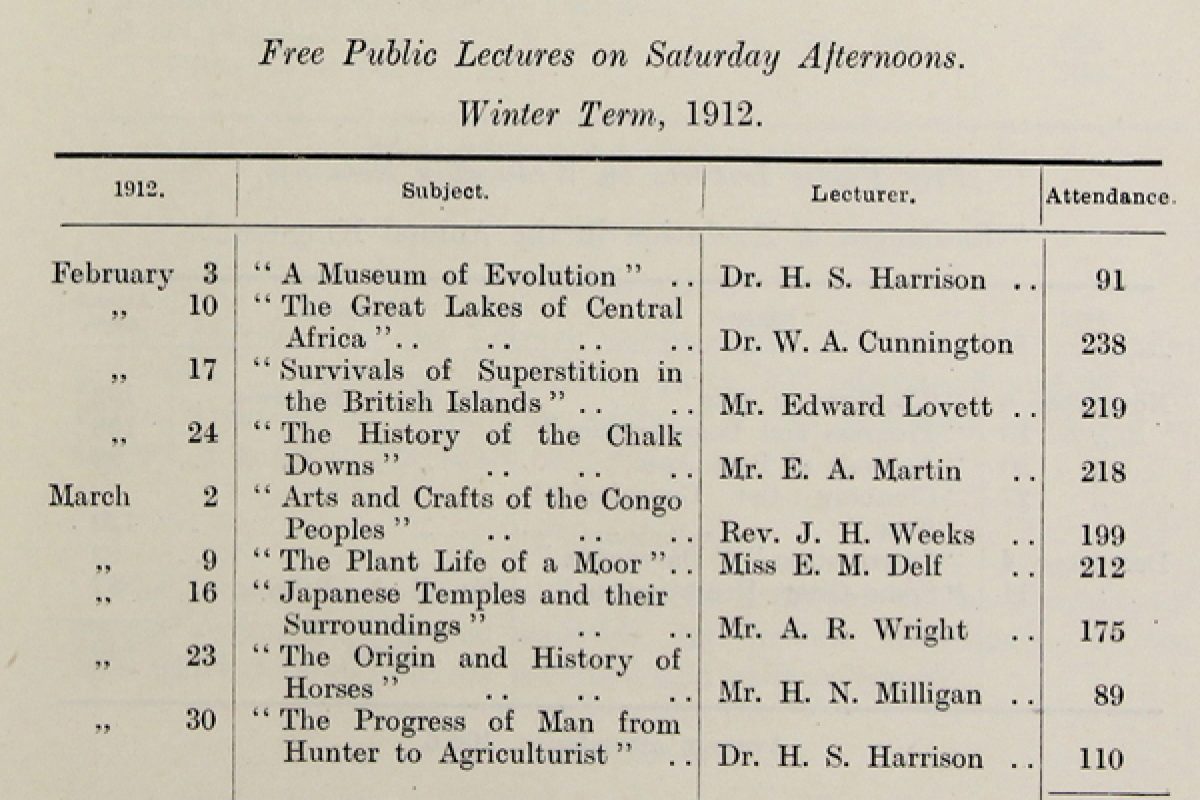 She is described as having a remarkable gift for stimulating and training students, “able to discern the faintest spark of interest in a student and to fan it into a flame.” Her determination and initiative led to the University approving the Westfield laboratory for preparing students for pass degree examinations in botany in 1910 and for honours degrees in 1915.

Delf-Smith’s passion within botany lay in marine algae and the process by which plants excrete water (transpiration). It was her results in this area that lead to her award of the London DSc as well as the Gamble prize from Girton.

She returned to her old stomping ground in South London to give numerous lectures at the Horniman, and we can find listings in our records from 1912, with talks on “The Plant life of a Moor” on 9 March and “The Botany of Bread” on 2 November.

We’ll leave you with a poem she wrote for The Sportophyte, a journal edited by Marie Stopes:

Last night as I lay dreaming
There came a dream so fair
I stood mid ancient Gymnosperms
Beside the Ginkgo rare.

I saw the Medullosae
With multipartite fronds,
And watched the sunset rosy
Through Calamites wands.

Oh Cryptogams, Pteridosperms
And Sphenophyllum cones,
Why did ye ever fossilise
To Palaeozoic stones?
E.M. Delf

By appointment
Our books, journals and other publications and formats range from…
Find out more

Poetry: The Wilsons and Wuhan

We have been searching our collections for objects that show how poetry and art unites us all across borders.

Photography Student, Fern Denyer shares her experience volunteering at the Study Collection Centre and assisting with the recording of the Brain Collection Archives.
About the Horniman