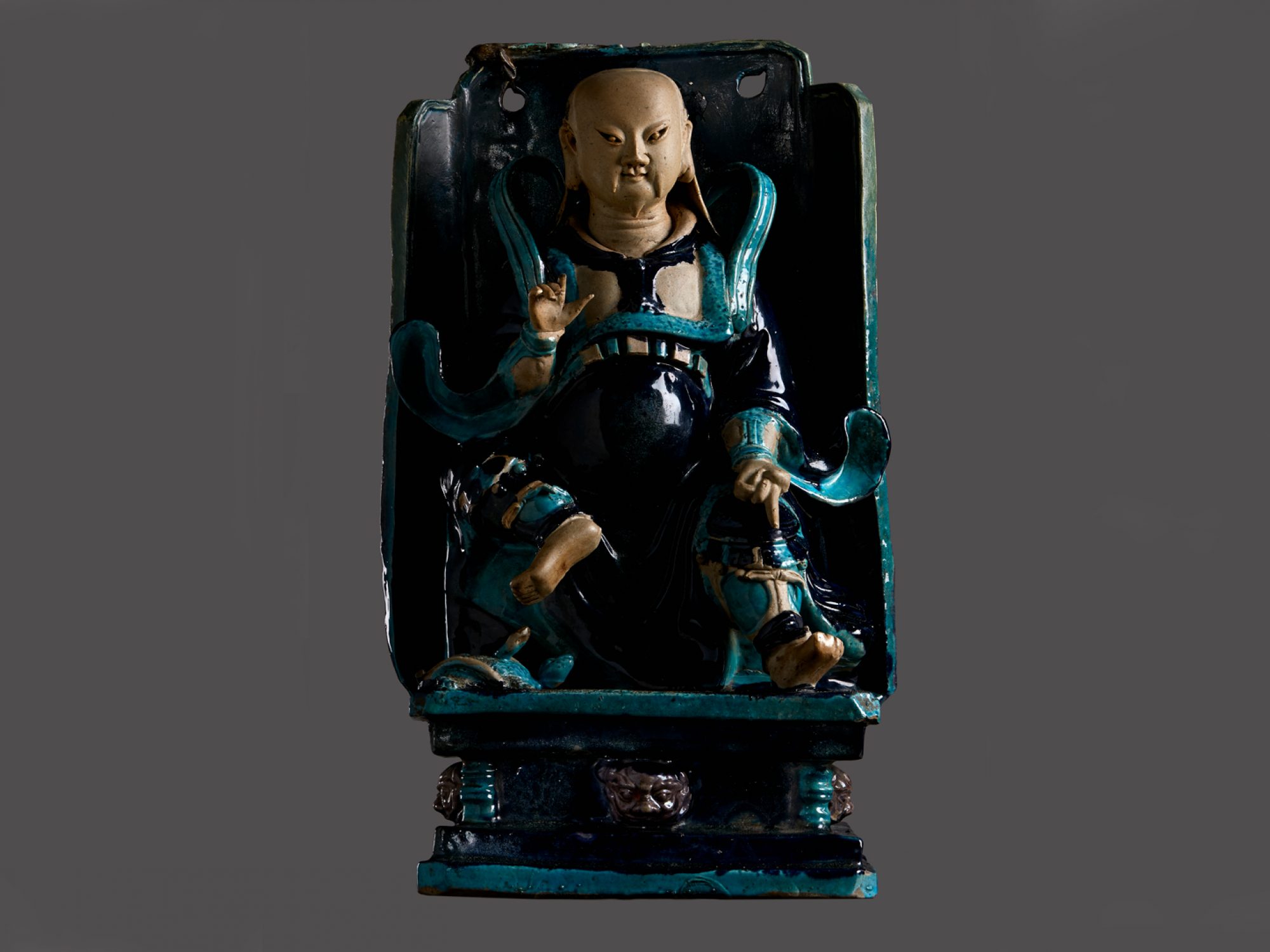 Anthropology Loans Object in Focus
As part of the Object in Focus programme, Naomi, Curator at Chiddingstone Castle tells us about the Chinese deity Zhenwu and Denys' collection of Japanese and East Asian art.

My name is Naomi and I work as the curator at Chiddingstone Castle. My job includes looking after the collections, displaying and researching them.

Denys was an eccentric collector who dedicated his life to finding fascinating artefacts at auctions and art dealerships in the UK. He also collected all the furniture, paintings and other curiosities that you can see today at the Castle, which was his home from 1955 until 1977.

He filled every spare space with his collections and opened the Castle the public himself for a small entrance fee.

He used to run a makeshift ticket booth (an open window at the front of the Castle) and give guided tours himself, often without revealing he was the owner. 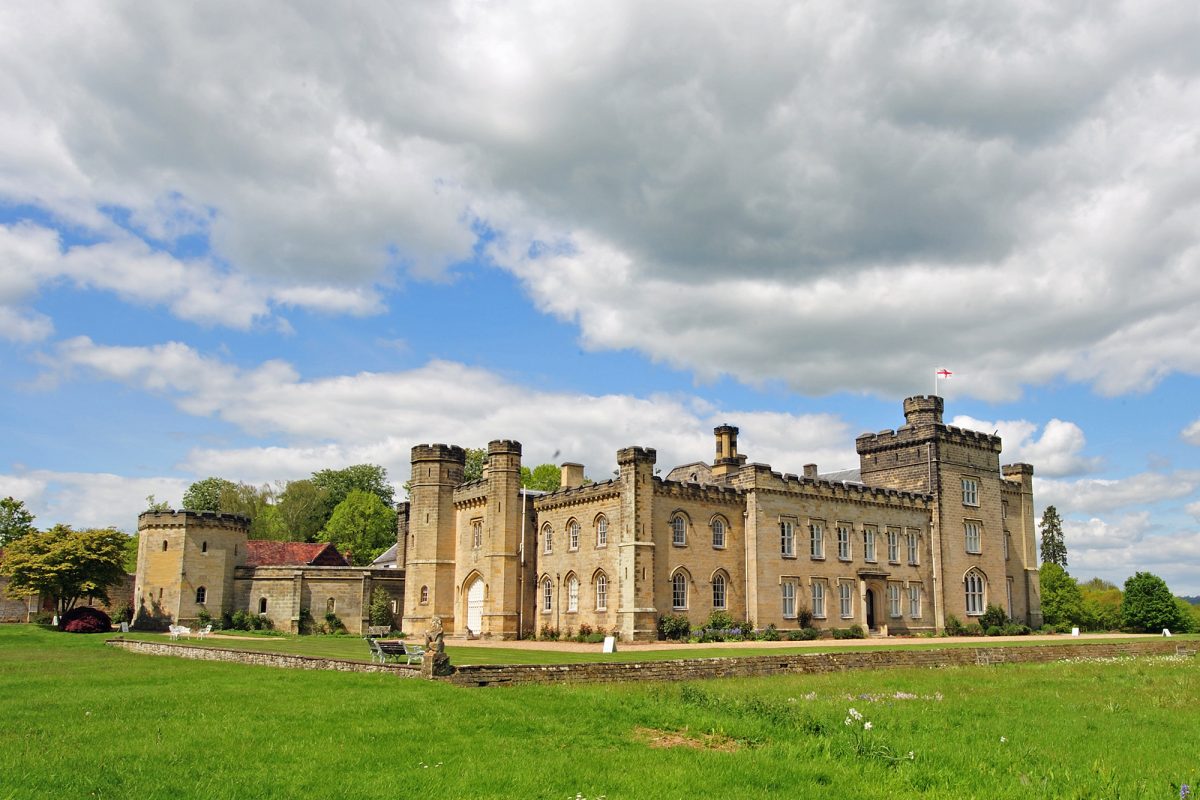 Last summer we had an exciting addition to the Japanese Room – a ceramic statue of the Chinese deity Zhenwu, or the ‘God of the North’ from the Horniman’s collection.

It is a glazed statue of the deity wearing armour in turquoise, navy, and white. He is seated on a throne and below his raised foot is a snake wrapped around a turtle – the ancient Chinese symbol of the North.

As part of the Object in Focus program we were able to loan the statue for three months. It sat in its own display case next to one of the suits of samurai armour – a perfect spot for this warrior deity!

Zhenwu, one of the gods of the four directions, is an ancient Daoist deity who particularly became popular in the Ming dynasty (1368 – 1644). He was worshipped as the patron of war and martial arts and was considered to be very powerful.

Denys focused on collecting objects related to Japanese samurai warriors who were dedicated to the martial arts and self-discipline. The statue represents Zhenwu as a fierce warrior wearing elaborate armour and seated in a pose that shows off his strength. 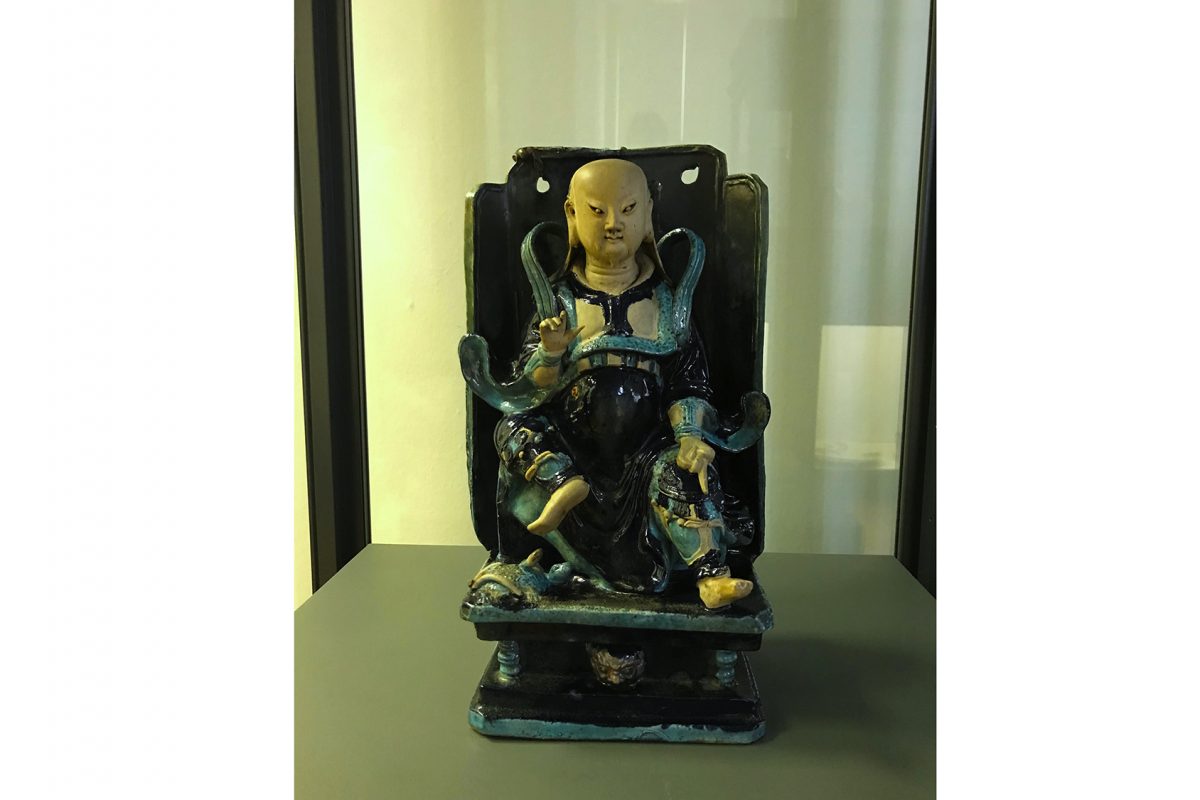 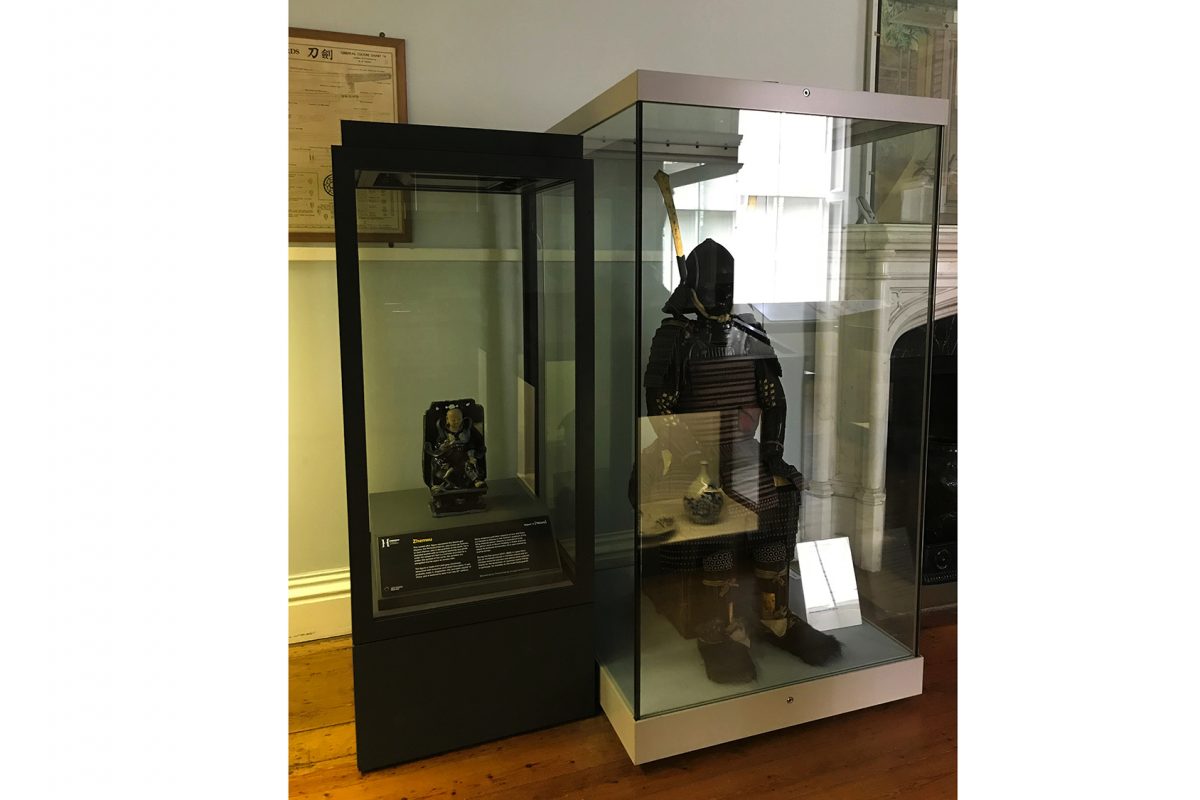 Zhenwu on display in Japanese Room 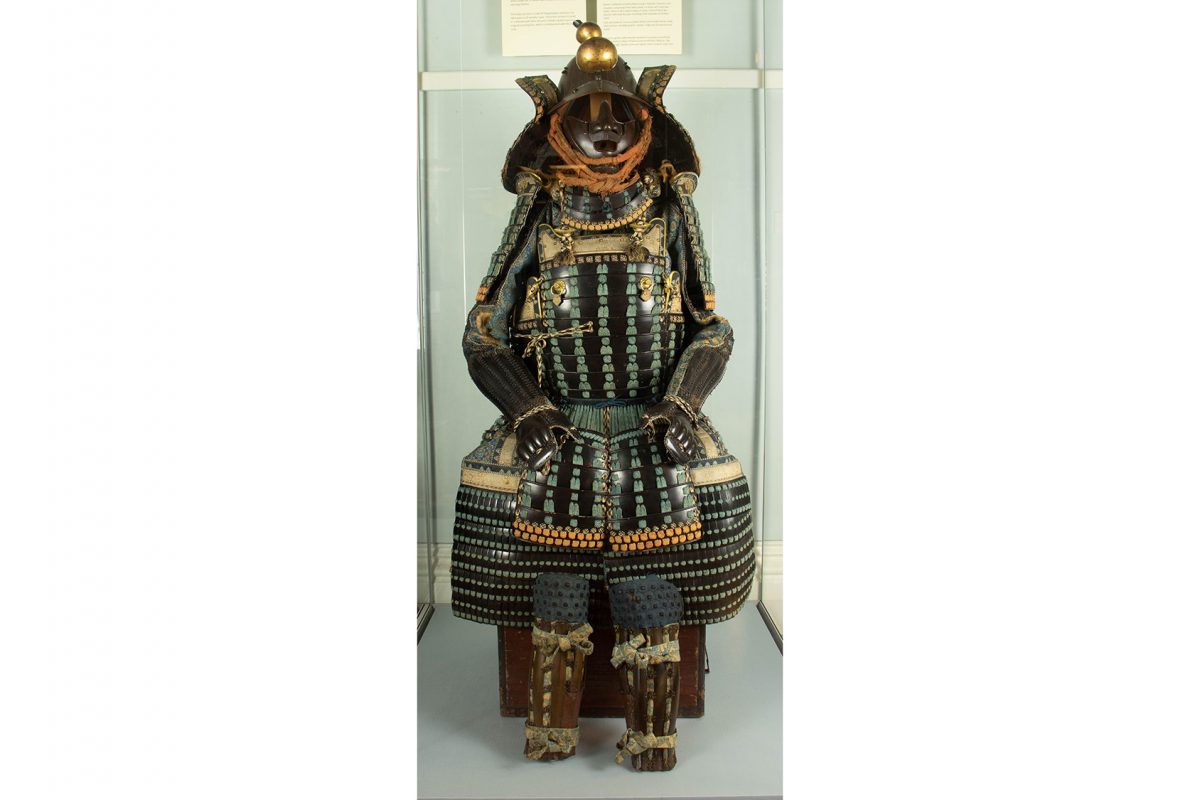 Samurai armour from the Castle’s collection

A large proportion of the Japanese collection at the Castle dates from the Edo period (1615 – 1868). During this time there was a revival in interest in Chinese culture and art.

Designs inspired by Chinese culture, traditions, and literature were popular on Japanese lacquer wares from this period.

There are a number of lacquer boxes in the Castle’s collection with Chinese-inspired designs, for example of Daoist immortal gods. There are also lacquer-wares depicting scenes from Chinese legends such as the one in which a poor scholar dreams of being the Emperor.

The loan of the statue of Zhenwu was an opportunity to display the kind of Chinese imagery that inspired a number of the objects in our Japanese Room. 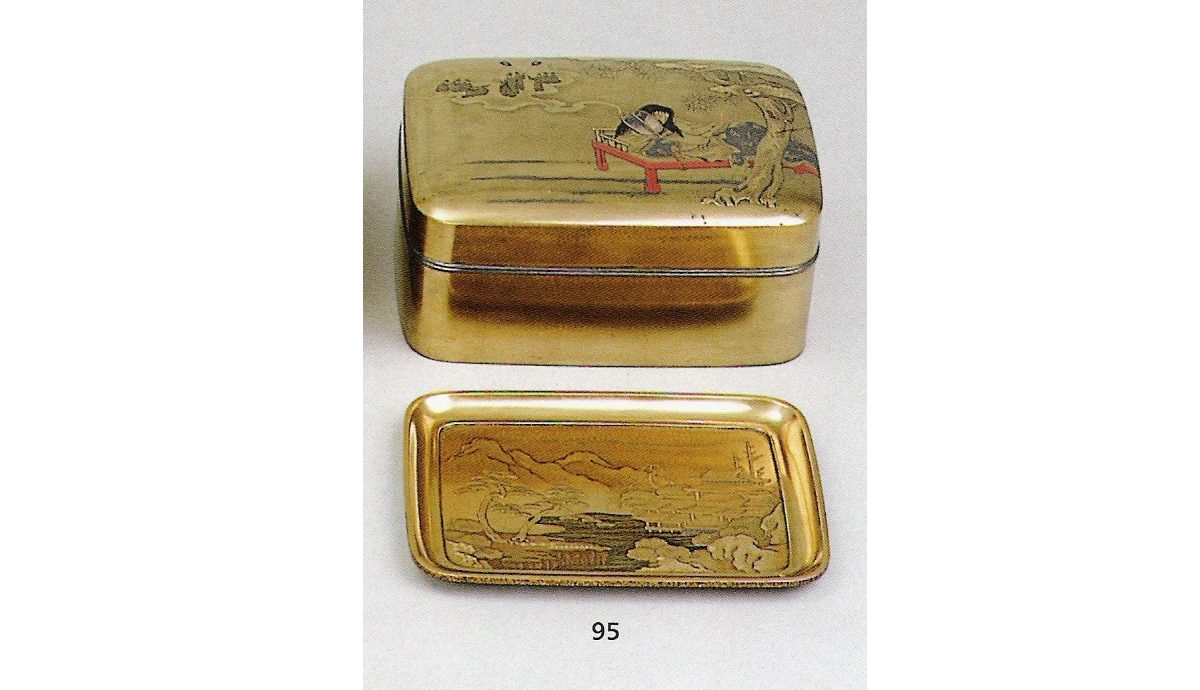 Lacquer box with dreaming scholar from the Castle’s collection

We are often asked why Denys chose to focus on collecting Japanese and East Asian art.

Denys was inspired from a young age by his father who had his own collection of Chinese porcelain. He grew up surrounded by his father’s collection and went on to create his own.

We think that Denys would also have approved of the addition of such an impressive Chinese statue alongside his collection! 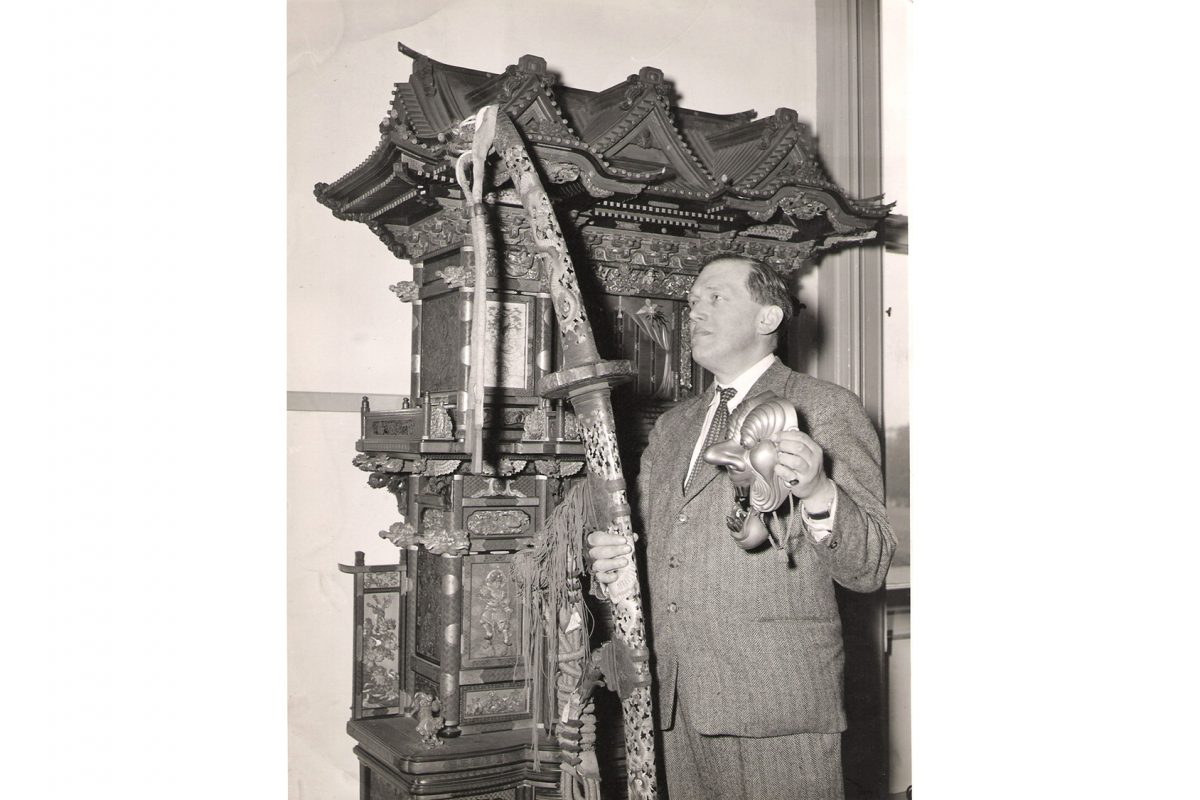 Denys Bower with objects from his Japanese collection

Loans from the Horniman are temporarily on hold while we complete a major project.
Find out more

The collections are looked after and conserved by for research, study and…
Find out more
About the Horniman