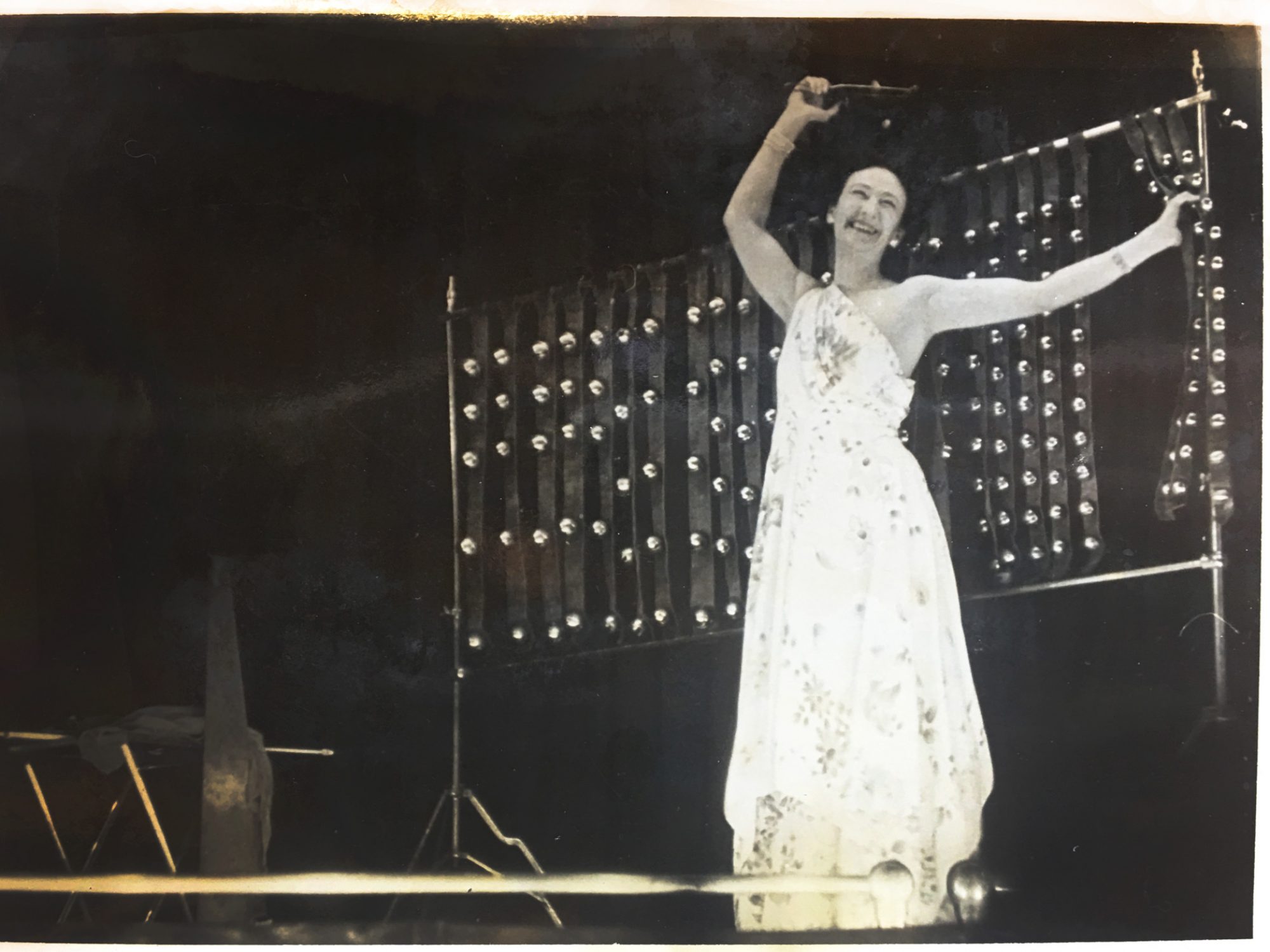 Music
Nothing says Christmas music quite like sleigh bells. We have some wonderful sleigh bells in the collection that once belonged to the musician Joan Stonehewer.

Joan made her living as a ‘concert artiste’ by playing the saw and other novelty instruments including the sleigh bells. Her variety theatre performances were of a type that was very popular from the turn of the twentieth century up to WWII.

Joan appeared at the Royal Variety Hall and the BBC, performed at dinners, receptions and cabarets, and her repertoire included songs such as the “Waltz” by Victor Herbert.

Joan was an extremely successful self-publicist. She had many professional business cards that she would give out to drum up her own publicity and was determined to succeed in her career. 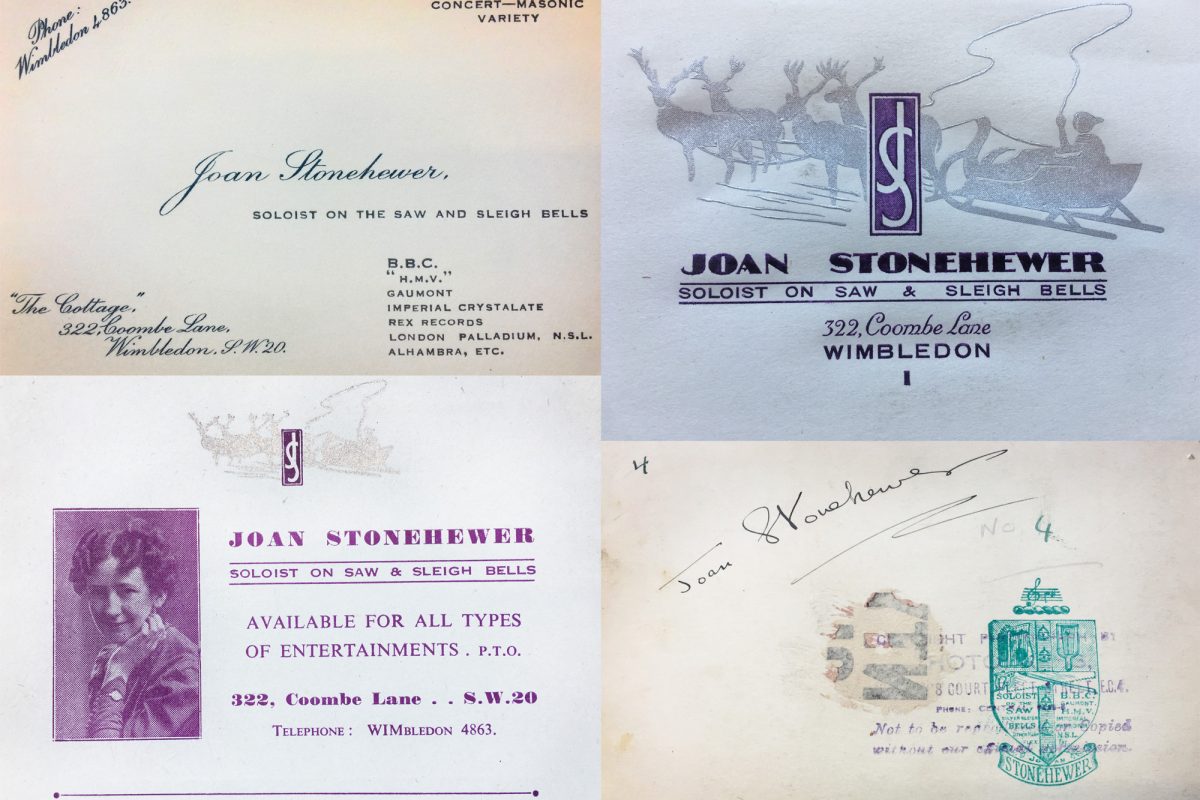 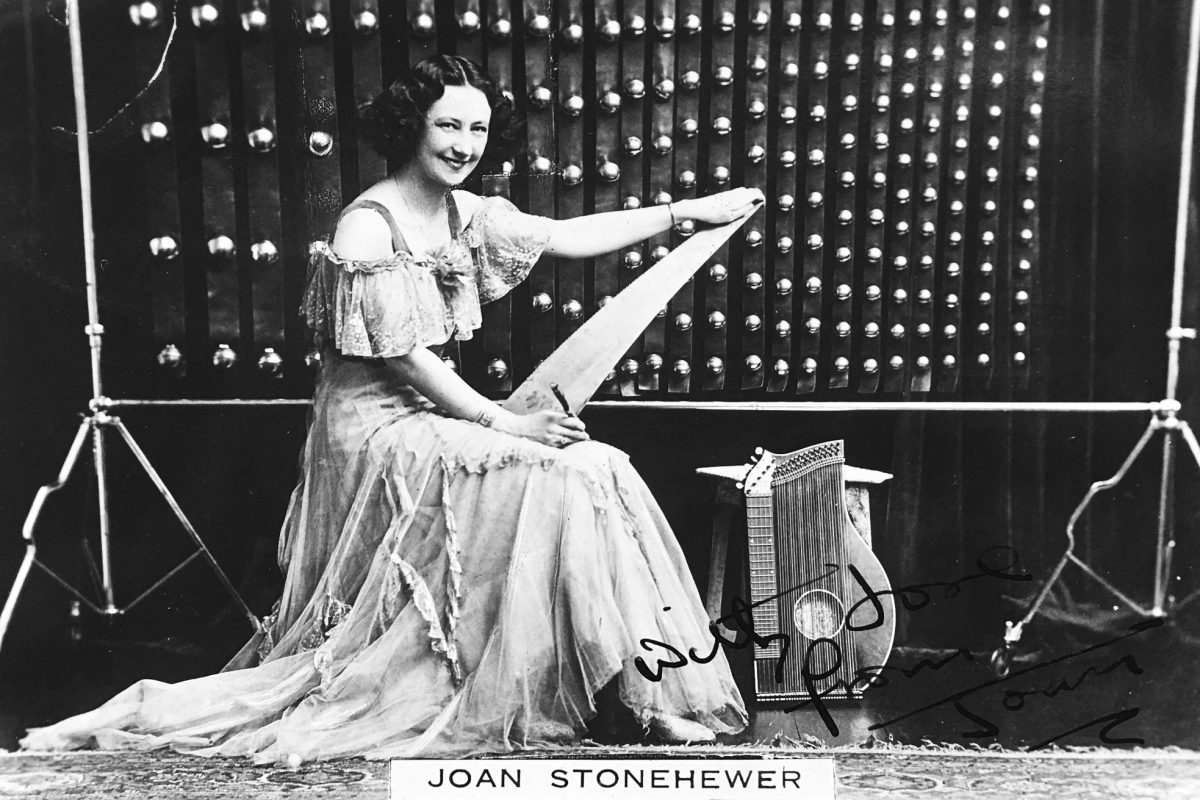 Joan Stonehewer, her bells and saw.

She made it very clear that she would not stop working when she got married – which was quite an extraordinary thing to do in the 1940s – when she had her wedding photos taken holding her musical saw.

After her wedding and in the years to come, variety theatre started to become less popular. As television became more readily available and tastes changed, work was harder to come by. 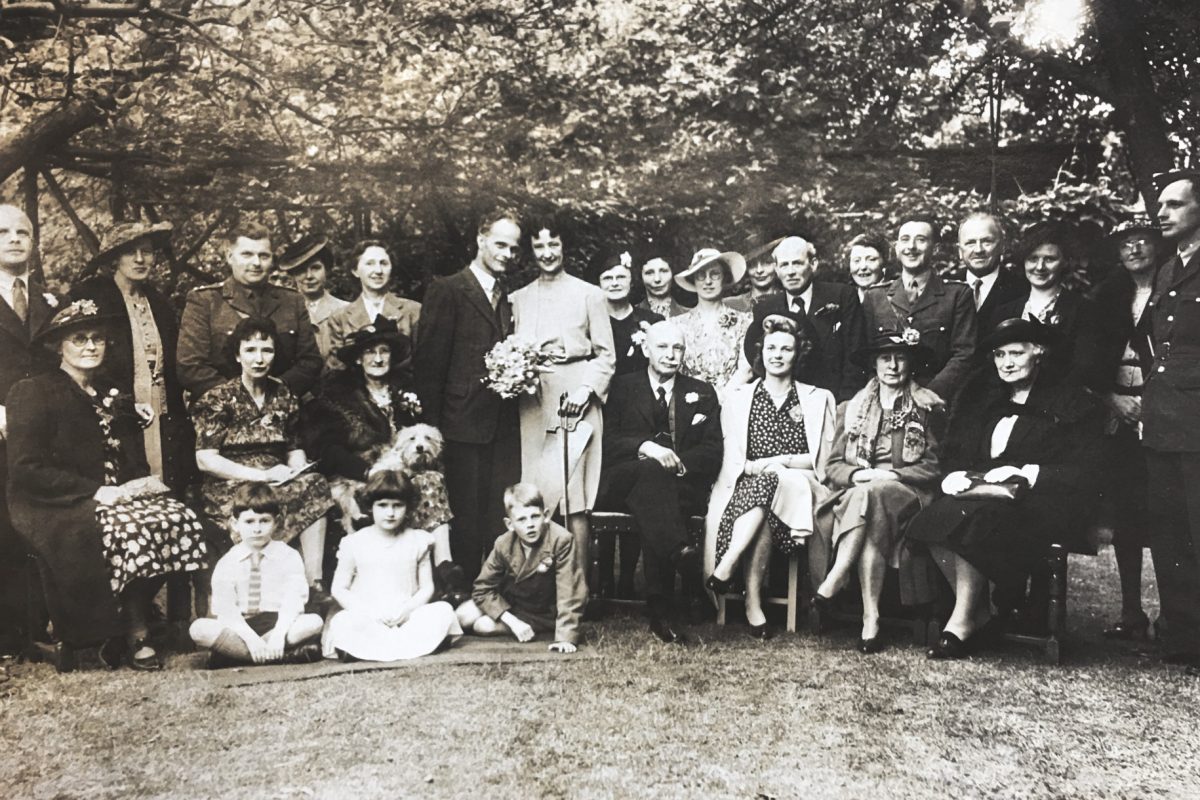 Joan Stonehewer on her wedding day with her family... and saw! 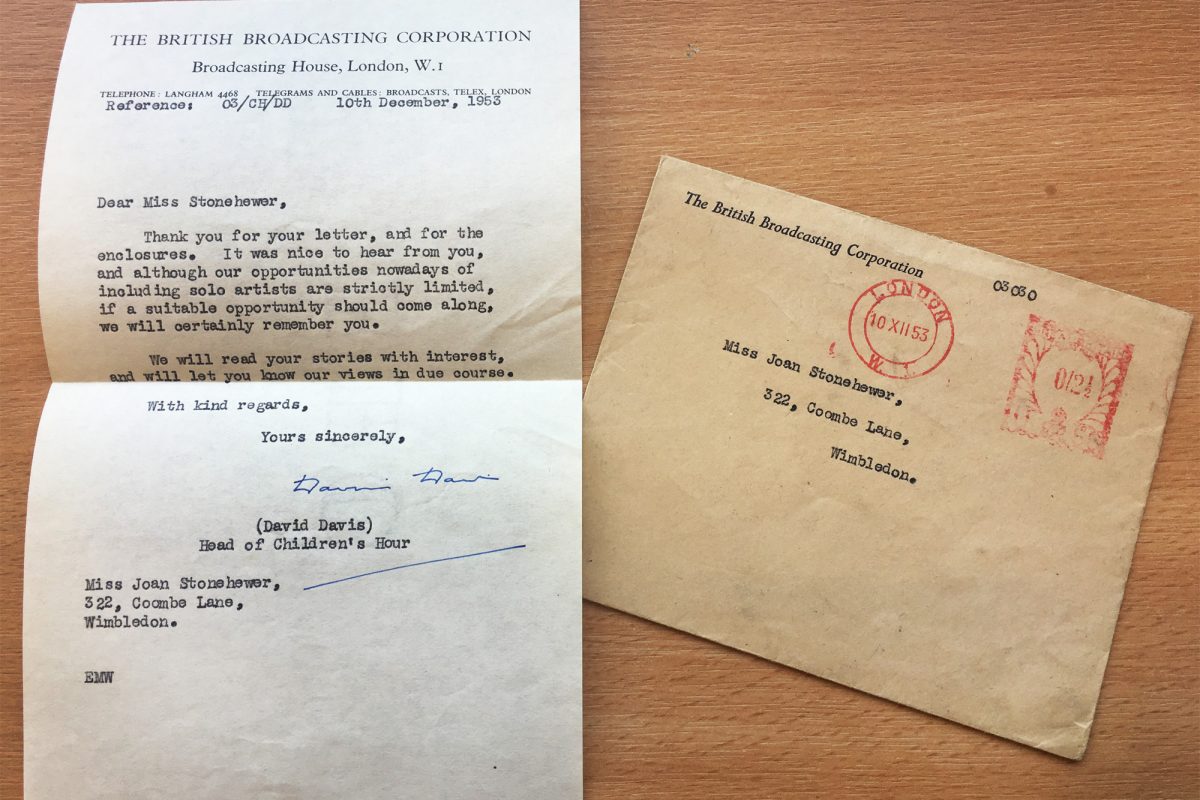 A letter from the BBC to Joan. 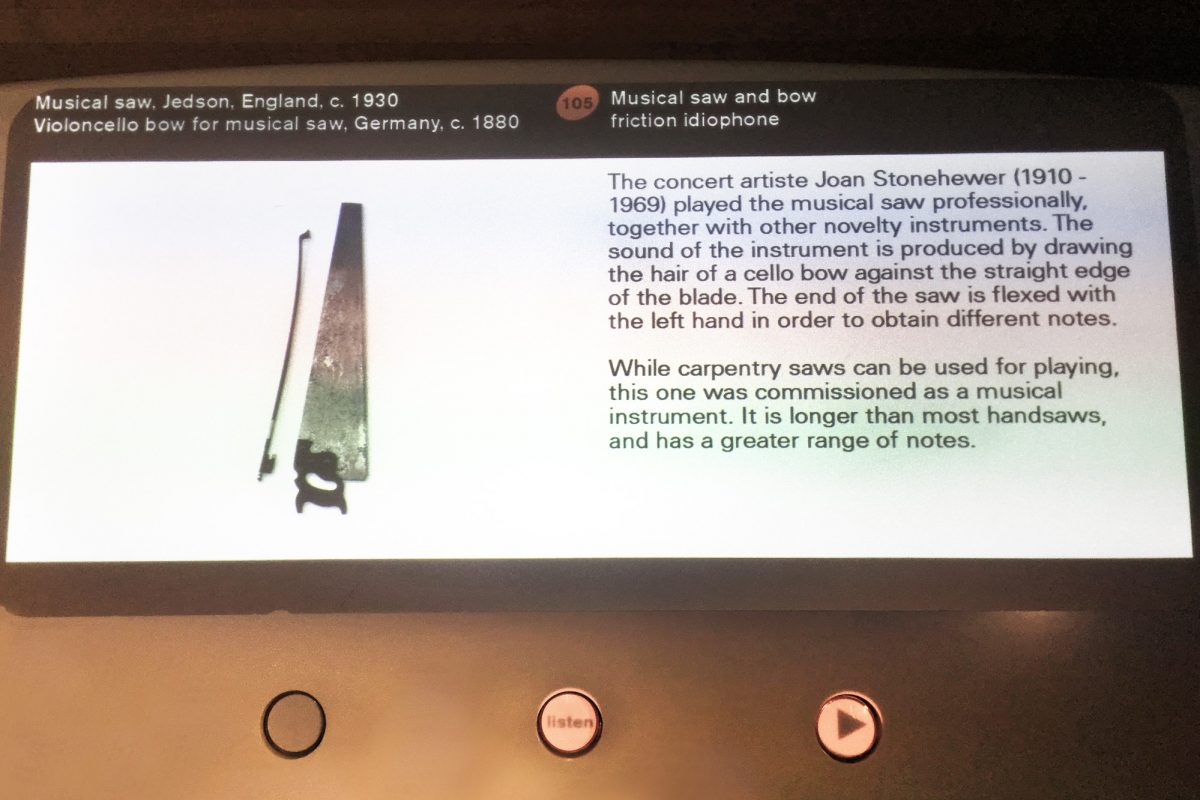 Find out more about Joan in the Music Gallery.

In the Horniman archives, we have letters Joan received from the BBC showing that she had contacted them about future work – an offer which was politely declined.

Joan retired from the stage in the early 1960s but she still appeared in a list of The Concert Artistes’ Association in 1968, the year before died.

Much of what we know about Joan was found in documents given to the Museum with the sleigh bells in 1987 by her son, Francis Townsend. It is wonderful to know the story behind the instrument and to learn more about this talented and engaging musician.

Visit our Music Gallery to hear a recording of Joan playing her musical saw.

Student placement Angie explains how she worked on the conservation of a Chickering clavichord, an instrument in the At Home with Music display.
Display
Free

10am – 5:30pm
The breath taking display spans a wide range of instruments…
Find out more

The Horniman has weekly music performances on Thursday afternoons called Hear it Live! which usually takes place in the Music Gallery. These are free, live sessions.

Our grand piano by Erard is currently on loan to Historic Royal Palaces for their exhibition Victoria: A Royal Childhood.

The Horniman is set to upgrade our Music Gallery, thanks to £90,000 of funding from the DCMS/Wolfson Museums and Galleries Improvement Fund.
About the Horniman