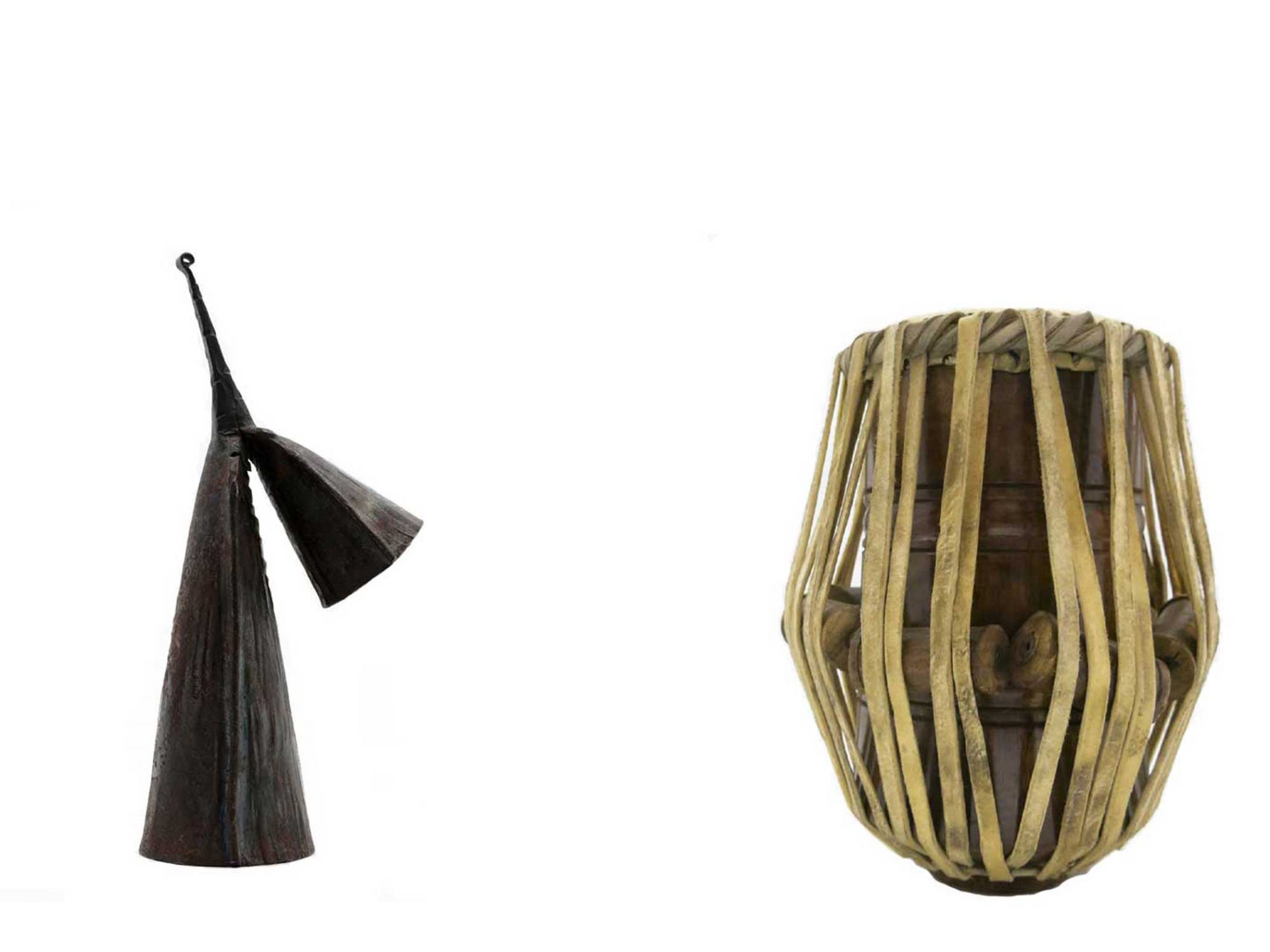 696 Music
As part of their residency at the Horniman, the 696 Resident Artists are able to borrow instruments from our collection to experiment with, play, or record with. So what have they been borrowing so far?

This djembe drum is originally from West Africa and is played with bare hands.

According to the Bambara people in Mali, the name comes from the saying ‘everyone gather together in peace’.

In the Bambara language, ‘dje’ is the verb for gather and ‘be’ is peace.

It’s a very versatile drum, and can produce a range of sounds. It’s very loud, meaning that it can be heard over percussion ensembles.

Traditionally the djembe is played by men – women can and do play the djembe but it’s uncommon.

Many master drummers share/have stories about the original djembe. Blacksmiths made the first djembe’s, making them to fit to the drummer. As the blacksmith cut the tree down for the djembe they would make offerings to the spirits for the trees being cut down. This mbira has 22 keys, or lameallae, made from scrap iron. These keys are plucked by the fingers and thumbs.

It is traditionally played by the Shona-speaking people of Zimbabwe, as part of religious ceremonies, where it is thought to attract ancestral spirits.

Usually two or more people play repeated patterns against each other. It is played held in the hand, using the thumb, or left or right forefinger to pluck the keys.

The name translates as ‘voice of the ancestors’. Claves such as these are played by being struck together. In Spanish Clave means clef, key, or keystone.

Their origins are thought to come from African cultures, bought to Cuba by enslaved people taken to the country.

Claves may have been made from wooden pegs (clajivas) used in wood construction of the time, especially in rapidly expanding slave ports such as Havana. Pair of rosewood claves. Latin American/Caribbean. {PLACE: Cuba, Latin America/Caribbean} The word 'clave' is Spanish, and is derived from the small wooden dowels used in various types of construction, also called 'clavijas'. Rhythmically speaking, Claves also means 'key' or 'keystone'. Palitos meaning 'sticks' in Puerto Rica) Like all idiophones, the Claves sound is made by the materials it is made from vibrating, in this case when struck or concussed together. They are sometimes called a Concussion Idiophone.
See full collection record

This is a dayan drum, the right side drum of the tabla set. Tabla is the main percussion instrument in Hindustani classical music, and comes from the Indian subcontinent.

Tabla is played in folk music in India, Bangladesh, Pakistan, and more. Players use a mix of fingers and palms to create a variety of different sounds.

The word tabla likely comes from the Arabic word for table – tabl.

Legend is that the tabla came from a two headed drum being dropped and broken into two pieces 500 years ago. 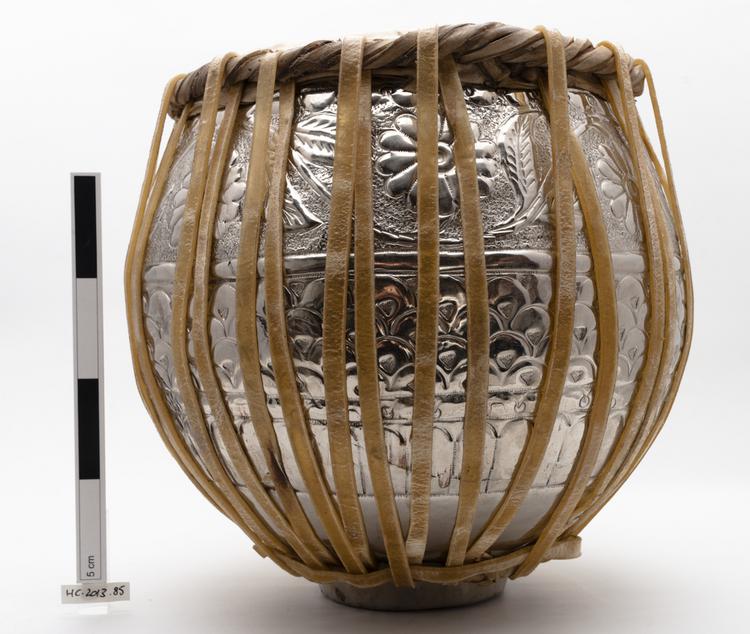 Metal drum called the Bayan (left drum base note). The drum skin is made from goat and cow leather. The black spot in the middle of the drum is called the Gab.
See full collection record

This Gankoqui bell is played by the Ewe people of Ghana and Togo and is made of forged iron. The larger of the bells is lower pitched, whilst the smaller is higher pitched.

The bell usually plays a simple pattern, which repeats throughout the piece. It’s this pattern around which every other instrument in the ensemble orientates itself. 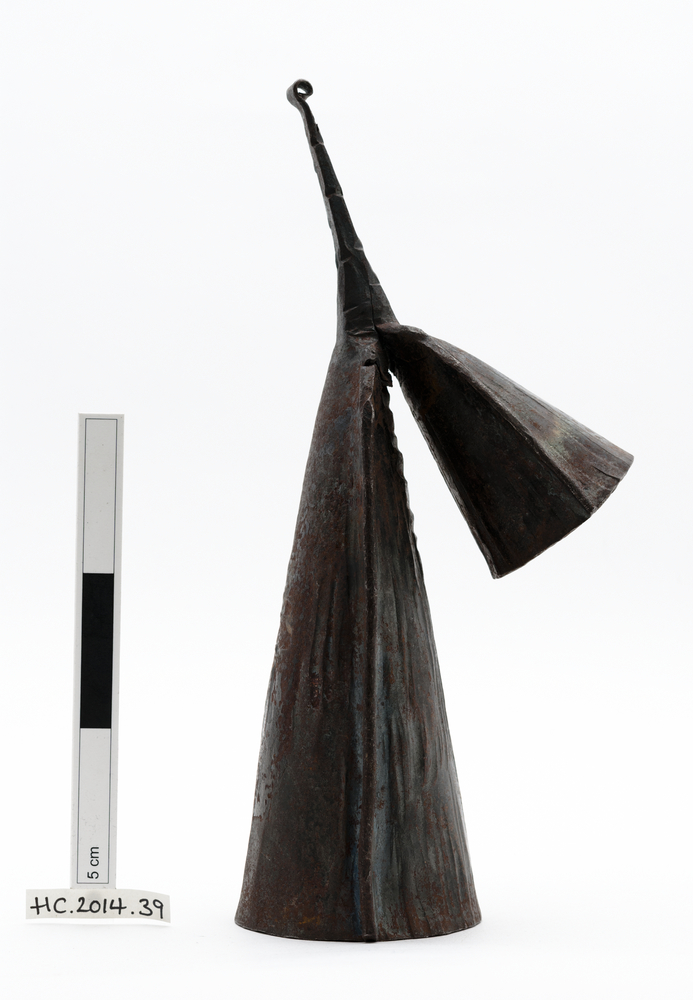 696 is a project platforming the best new Afrobeat, Jazz, Grime, Rap, R&B, Reggae and Soul music. The project focuses on championing music genres (and the people working in them) that have been disproportionately affected by bias in legislation.
Find out more
Exhibition
Free

10am - 5.30pm
When the 696 risk assessment form made it harder for London venues…
Find out more

Music Curator Adem Holness talks to us about 696.
About the Horniman