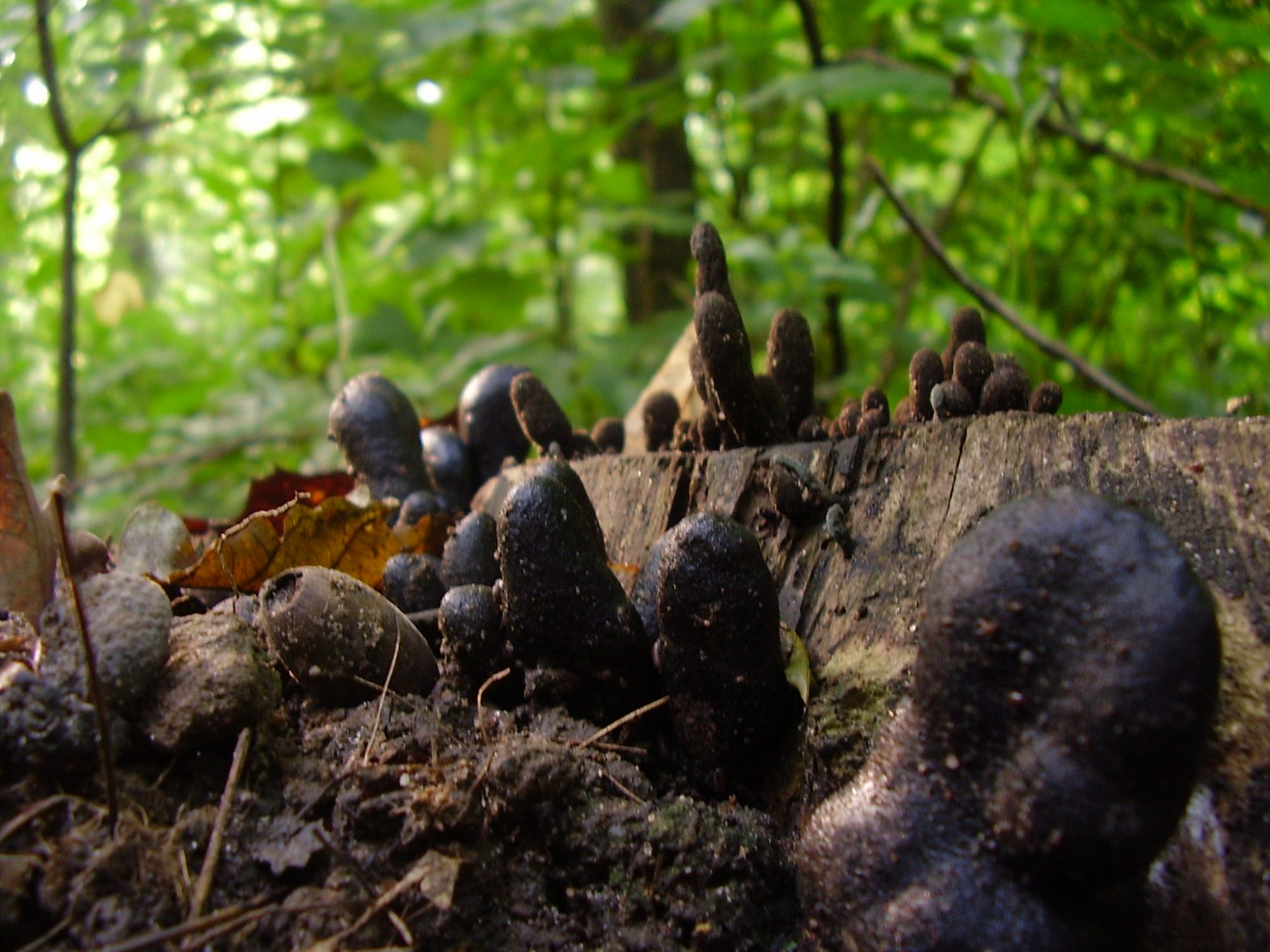 Gardens Natural world
Nature Trail regular Daniel Harwood has spotted something spooky looking at the bottom of our Gardens.

We need something a little spooky as the nights draw in, so let me tell you about my latest creepy discovery.

The other day I found some matt black finger-like projections poking up from a half-decayed and partially buried log. I knew they were one of two fungi, both of which have appropriately sinister names: Dead Man’s Fingers (Xylaria polymorpha) and Dead Moll’s Fingers (Xylaria longipes).

Both are closely related to the Candlesnuff Fungus (Xylaria hypoxylon) who we have met in an earlier blog, and who also emerges from dead wood at this damp time of year. 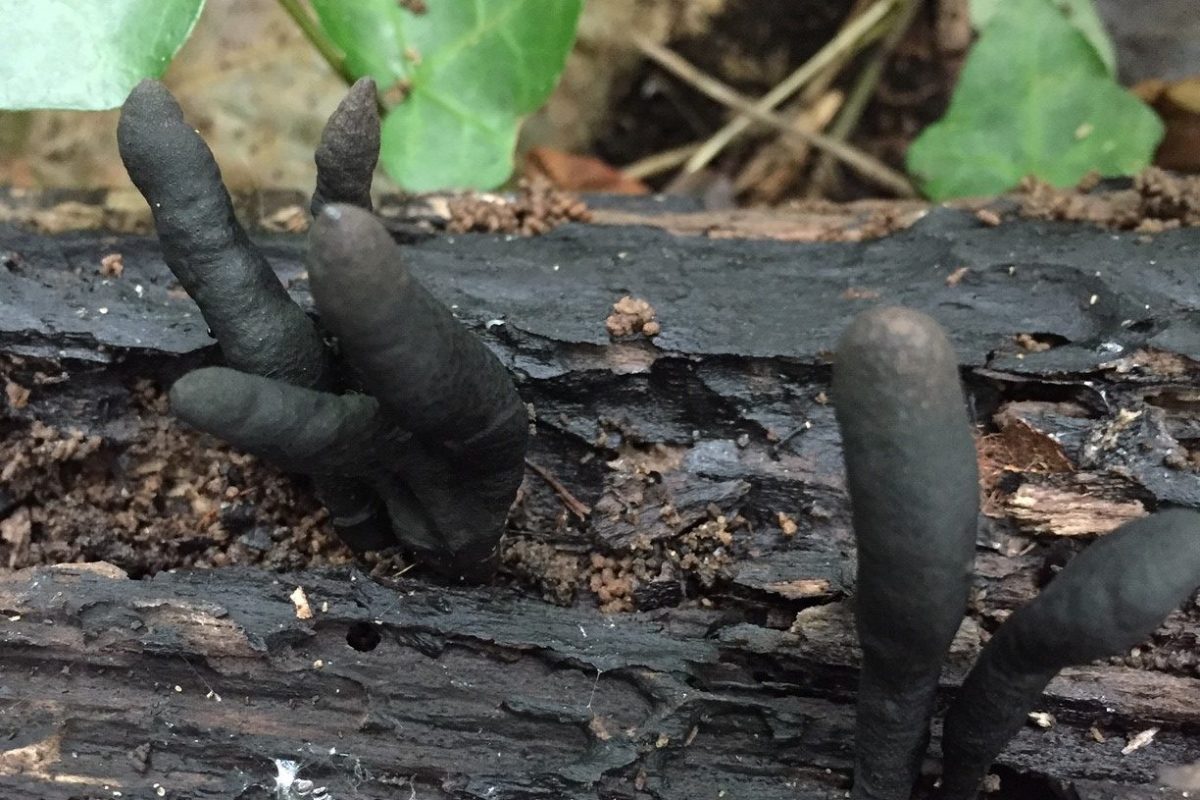 What type of fungus-y fingers are these? Daniel Harwood

Both the “dead finger” species are bigger than the Candlesnuff, with projections of about 3-5cm long. In the case of Dead Man’s Fingers, often forming tufts of fingers giving the appearance of a charred, arthritic hand reaching out from a log.

Like the Candlesnuff, they feed not on the cellulose or lignin, which make up the hard substance of wood, but on the polysaccharide binding substances which glue the cellulose and lignin together. Once all the polysaccharides have been digested, all that is left is a pile of soft wood fragments which can be eaten by insects, or further digested by other fungi.

The books and internet did not help me decide which Xylaria mine was, the pictures of both species looked exactly the same to me. So I decided to do something I don’t often do, which is to use social media.

I posted my photo onto the Facebook page of the London Fungi Group and within a few seconds I had an answer; and not only that, an answer from a very eminent mycologist. I find out that the fingers I found belonged to a dead man not a dead moll. So Xylaria polymorpha it is. I’m told that X. longipes is generally more slender, and more obviously stalked, with a swollen part at the end. The longipes refers to the ‘long feet’ of the fungus aka the stalk.

Just for completeness, there’s a third matt black type of fungus that protrudes from the ground – the Geoglossum fungi, or ‘earth tongues’. They are more of a grassland group of species and wouldn’t be found emerging from dead wood. They also do look (slightly) more like a tongue, with a flattened and curled appearance.

Social media can be a great way to learn about identification. There are lots of good groups. I have joined the London Fungi Group and Bug Spotters on Facebook. 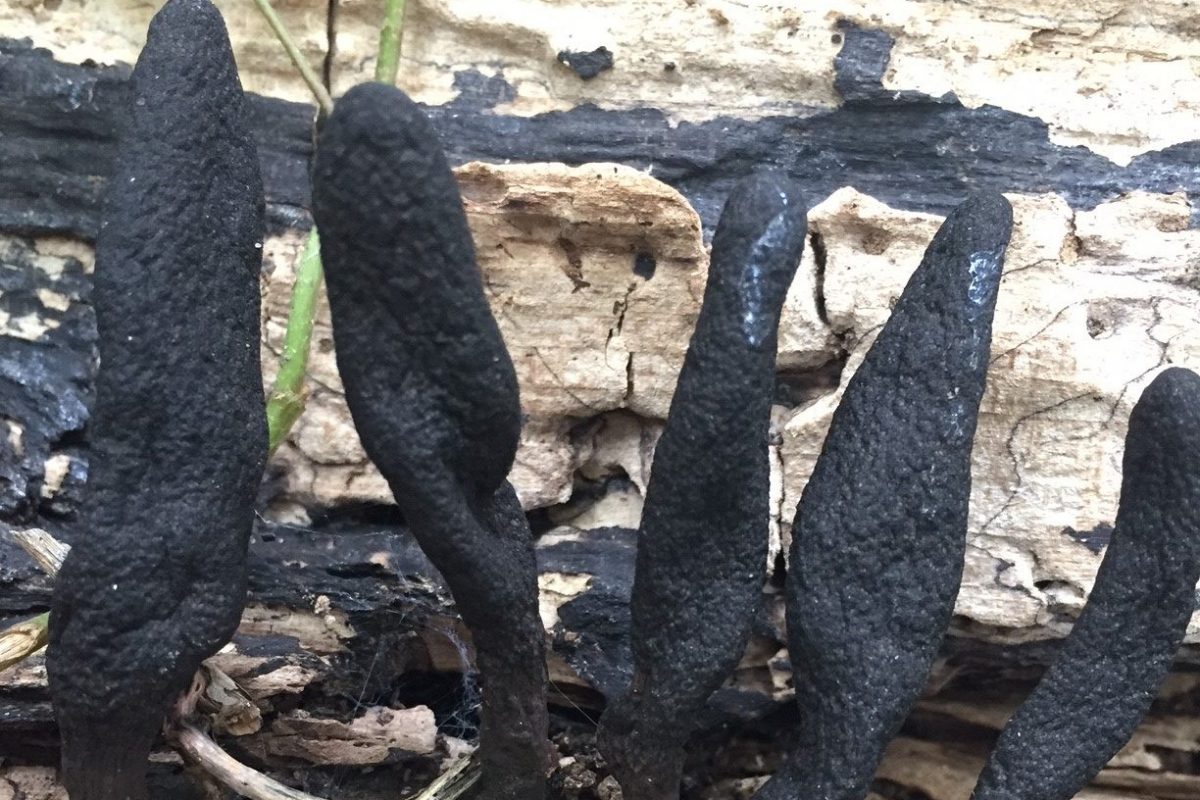 You will get far more helpful replies to your posts if you show you’ve made an effort. For example with a fungus, “Can anyone help me with this one, found at the edge of a path in the Horniman Nature Trail last week, is it a Xylaria?” is better than “Hey guys! What’s this?”

Also, look at the last few posts before posting. A couple of weeks ago many people seemed to be posting pictures of honey bees and asking what they were, whereas if they had just looked at the last few posts they would have seen dozens of photos of their mystery insect with the ID confirmed by a world bee expert.

I have been delighted at the tolerance, patience and friendliness of these groups towards beginners. In few other fields do you have direct access to the opinion of an expert, often within a few minutes.

Staying on the fungi theme I have seen far more collared earthstars (Geastrum triplex) this year just near the edge of the path.

And if you want to venture (very slightly) further afield, there are a few nice fungi on the recreation ground across the road from the Trail. These ones are a type of parasol mushroom (Chlorophyllum brunneum). 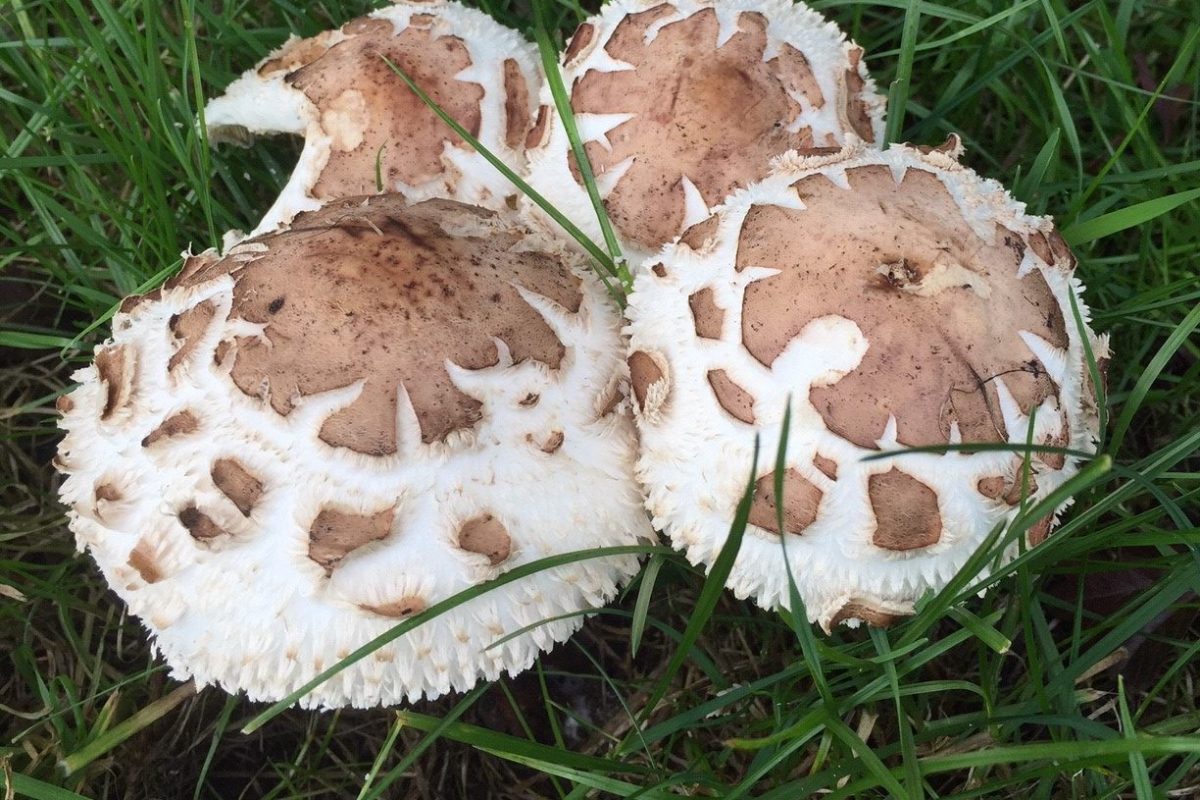 As we go down the steps to leave the Nature Trail, admiring the ivy florets which have not quite yet come into full flower, my wife Marion finds something on an ivy flower.

A mahogany-red little fellow with cream spots. We take a few photos. I know it’s a ladybird I haven’t seen before and I know it’s on my Field Studies Council fold-out guide, which I consult when I get home. 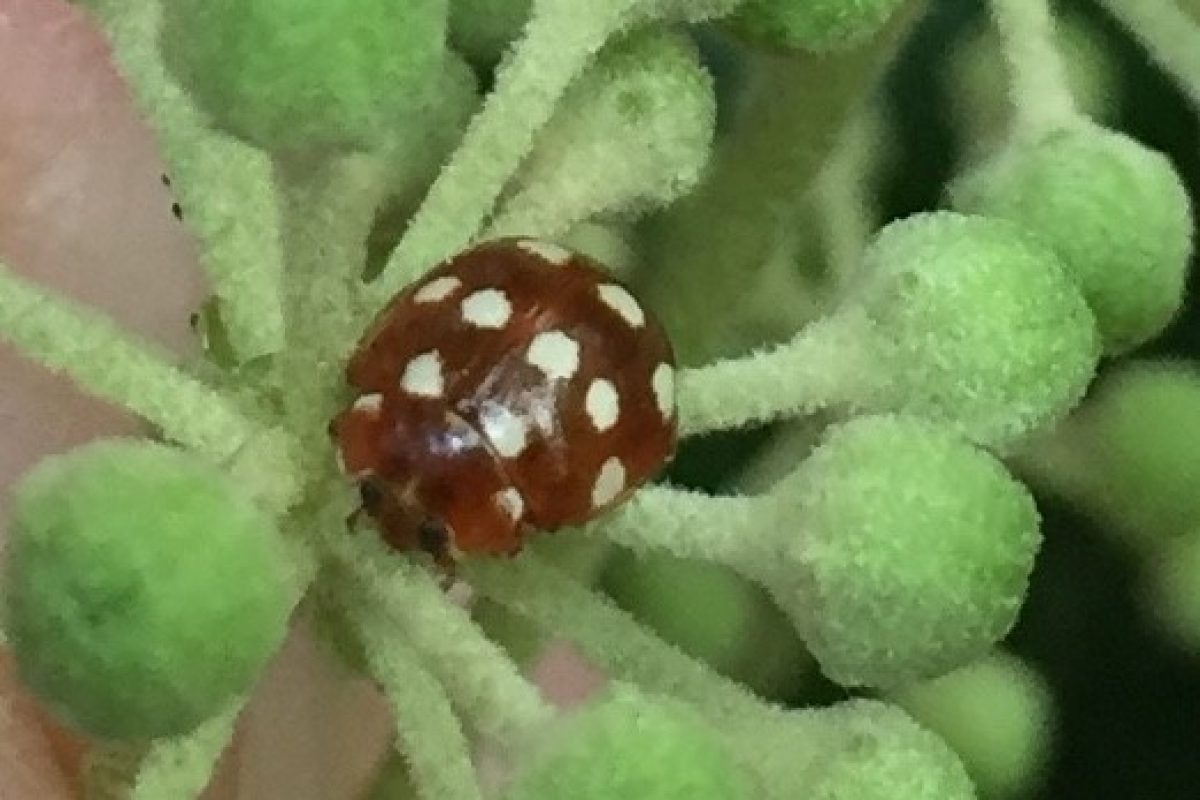 What type of ladybird is this? Daniel Harwood

I look up the cream spot ladybird online and it says ‘very abundant, found virtually everywhere.’

It’s always slightly annoying when books or websites say this about something you have never seen before. Cream spot ladybirds are rare and wonderful. Rare and wonderful to me, anyway.

They are slightly smaller than the very common Harlequin ladybird (Harmonia axyridis). They like deciduous woodland and are predatory, feeding on aphids and other small, soft insects.

Insects are very hard to identify, but ladybirds are an excellent place to start. They are bright, shiny and there are many that are quite distinctive. They stay more still than butterflies and the Field Studies Council fold-out guide (there is one for ladybird larvae too) will identify nearly all the ones you are likely to see.

Also, there is an excellent one-hour talk on ladybird ID by Helen Roy and Peter Brown, the UK’s ladybird experts, freely available on YouTube. The only tips I’d give for ladybird watching is to keep looking closely at the greenery on the sides of the path, and remember many species are rather smaller than you think they are going to be.

So there’s a little winter project for you, learn your ladybirds and you will be ahead of the game when they are out and about again next spring!

The Nature Trail has become popular in lockdown, as people find new green spaces to take their exercise in. Daniel Harwood has been looking at the fungi you can find at the moment.
Display
Free

9am – 3pm
The Horniman Nature Trail is the oldest in London. It…
Find out more

A Beautiful Parasite and a Dapper Beetle

Nature Trail regular, Daniel Harwood, draws our attention to the fascinating broomrape and an interesting insect.

Daniel Harwood takes a moment to talk about moths you might spot on the Horniman's Nature Trail during late summer.

Daniel Harwood has been bee watching on the Nature Trail. Find out what you can see blooming there now.
About the Horniman