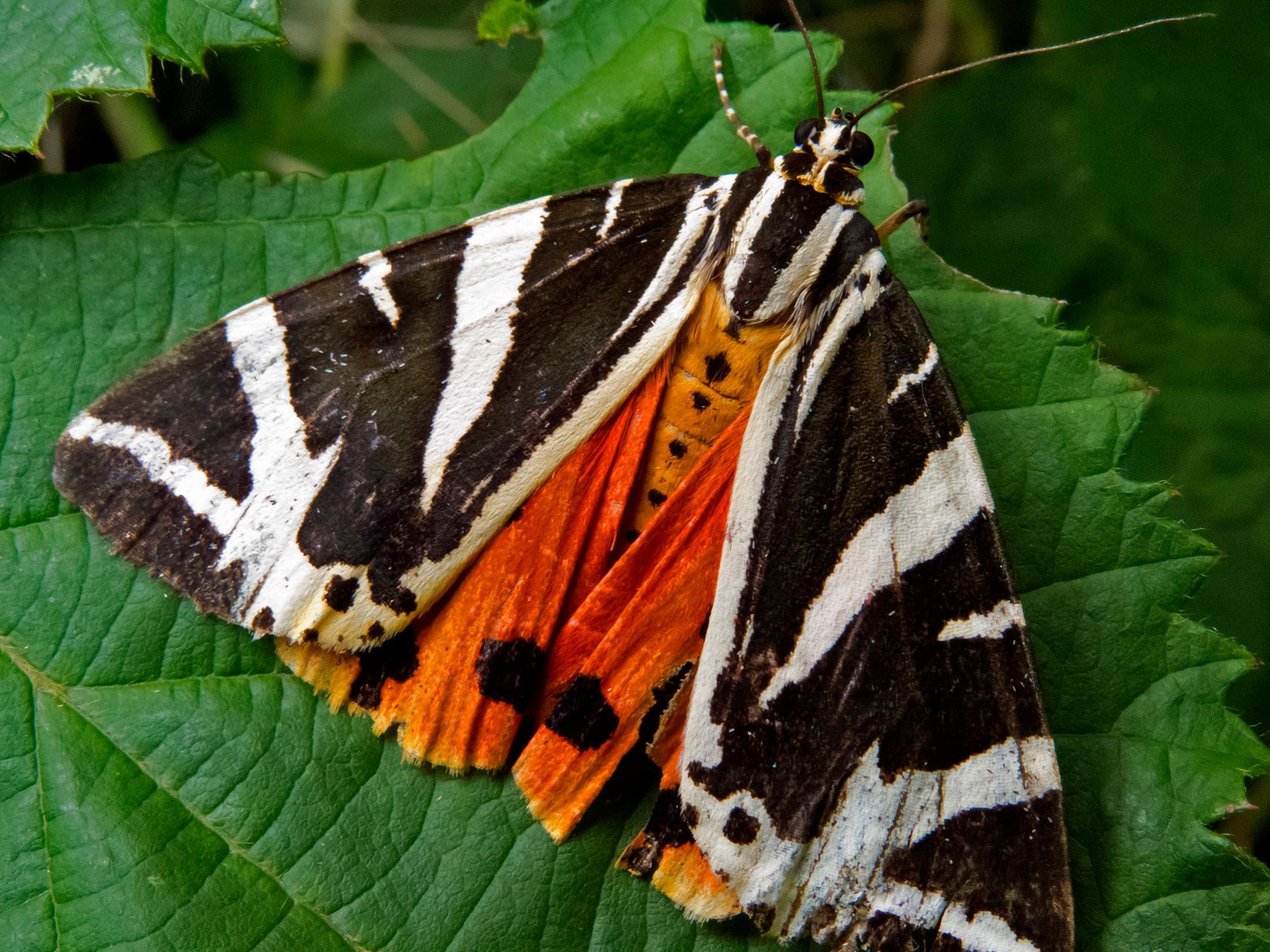 Gardens Natural world
Daniel Harwood takes a moment to talk about moths you might spot on the Horniman's Nature Trail during late summer.

Late summer can be a rather dispiriting time, especially this year. It’s cloudy, the birds are quiet, and the poor bees are looking rather frayed and faded.

However there’s always something around to cheer us up. This year I have noticed a lot of beautiful Jersey Tiger moths (Euplagia quadripunctaria), not only on the trail but around the Horniman Gardens, and even chasing the cars on the London Road.

It’s a pretty unmistakable insect when seen resting, with a lovely creamy white and dark brown jagged striped pattern, and a glimpse of an orange underwing. In flight it’s more difficult to identify, with its orangey coloration it can superficially resemble a Painted Lady butterfly (Vanessa cardui) which is also often seen in August, although I haven’t seen one so far this year.

The Butterfly Conservation website (the charity are involved in moth conservation too) tell us that this colourful insect is probably a relatively recent arrival to the UK from mainland Europe. It is well established in South Devon, Dorset, the Isle of Wight and Sussex, suggesting it has a southern origin. It likes gardens, coastal cliffs, the upper parts of beaches and rough, disturbed ground. It also seems to like my front door! 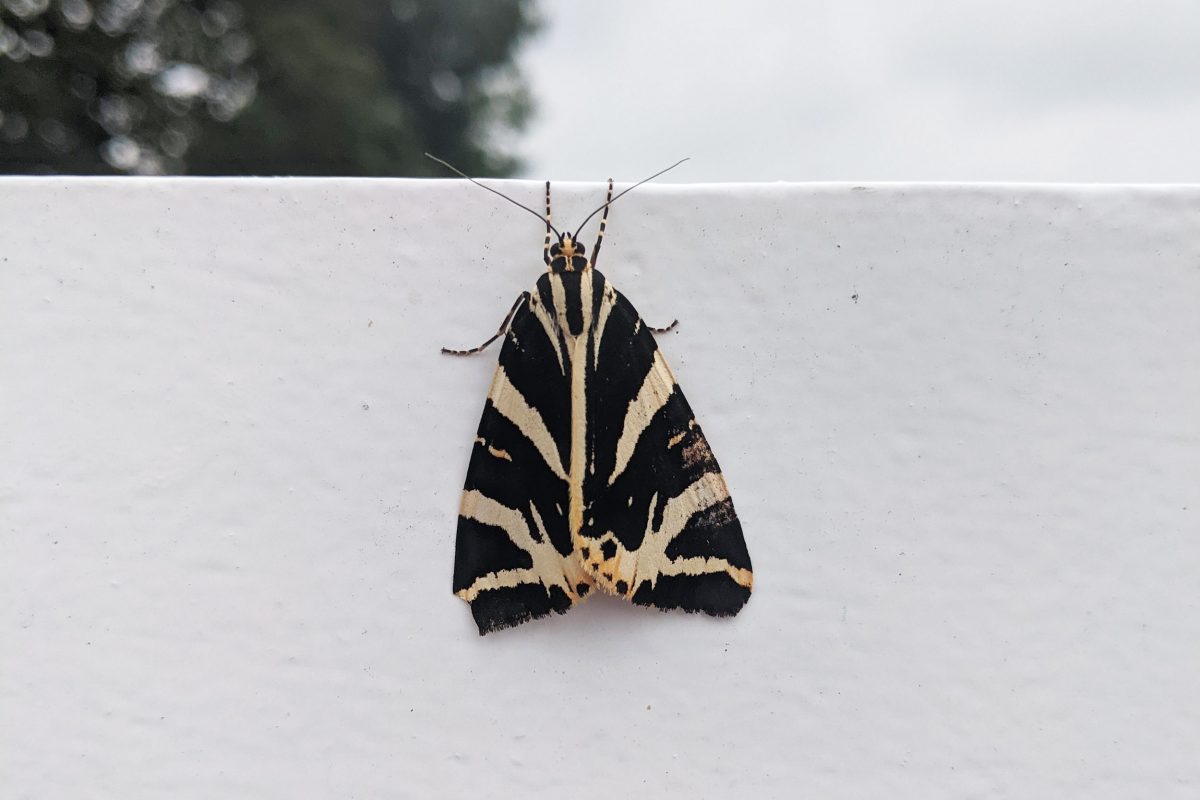 A Tiger Moth resting outside of a Horniman office 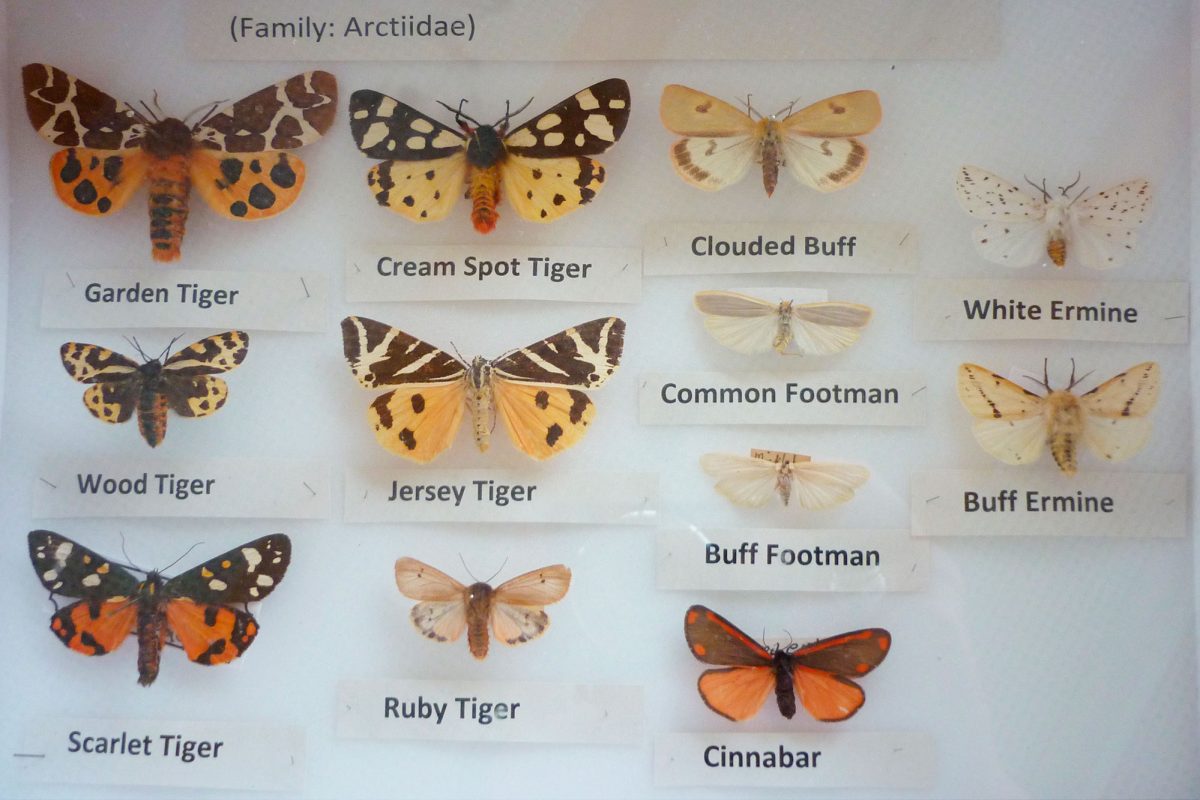 Tiger moth from our Handling Collection, alongside a a number of other moth specimens

They seem to be spreading north and inland, quite possibly because the climate is getting warmer. 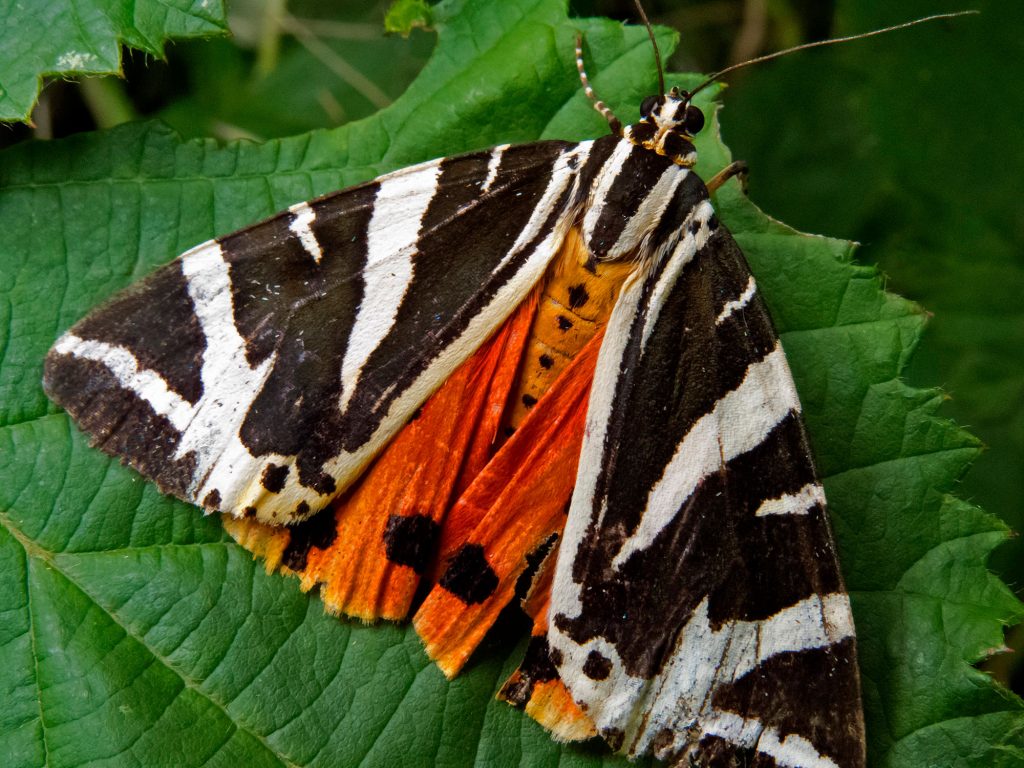 Their caterpillars feed on nettle, plantains and bramble, so there should be plenty of food for them on the Trail.

The world of moths is a secretive one. Most of them come out at night, and to see them you can attend a ‘moth event’ which occur at a time when I would prefer to be in bed. I always worry that they would be rather serious affairs, involving strange boxes, traps, lights and mothy paraphernalia!

In any case, the Nature Trail is closed at night. So, on the Trail we have to make do with day-flying moths.

There are 2,500 types of moths in Britain and Ireland, 900 of these are reasonably big (macro-moths) and 1600 of them are tiny (micro-moths). I see lots of micro-moths on the Nature Trail but I have no idea what species they are.

Thankfully, over one hundred species of moth can be seen fairly regularly flying during the day. A few, such as the Oak eggar is seen in the day because the males are trying to locate and disturb nocturnal females who are resting in the undergrowth, and some, like the Hummingbird hawkmoth because they like to feed on flowers during the day rather than night. 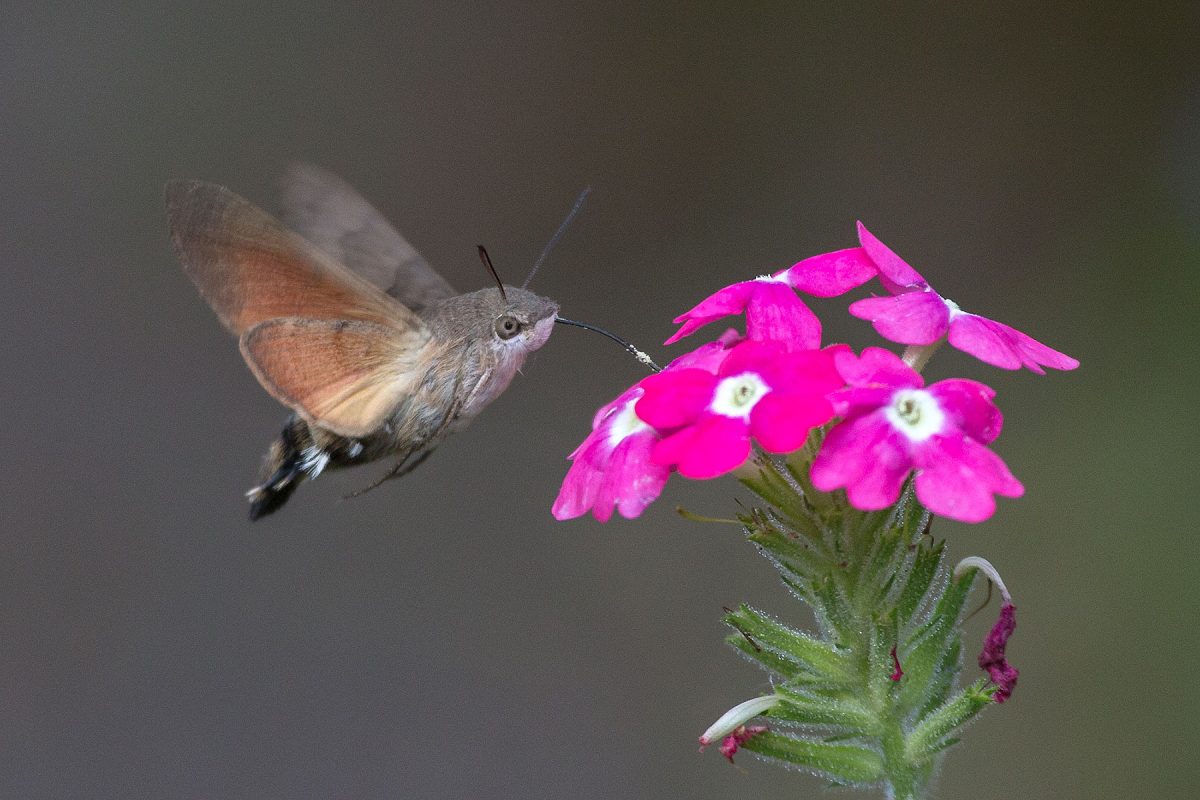 The Hummingbird hawkmoth can be seen in the day, Jerzy Strzelecki via wikicommons CC BY-SA 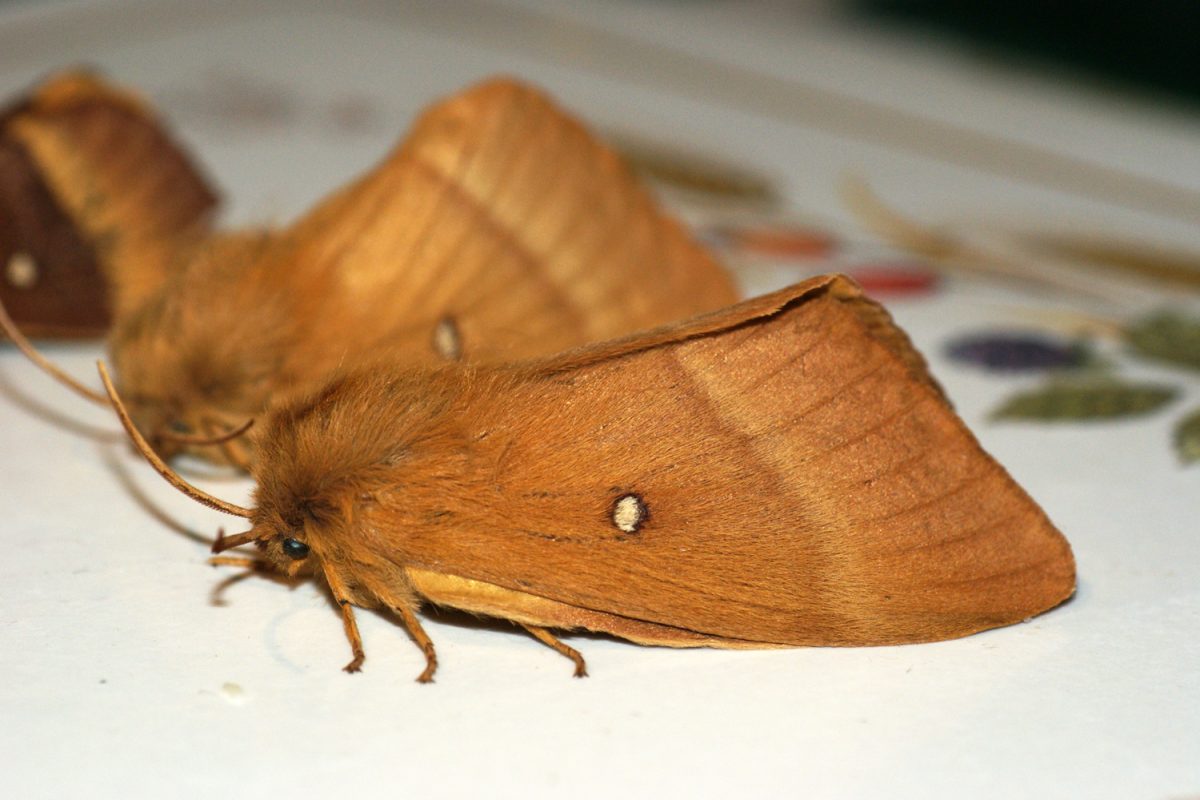 So if you see a mothy butterfly-like thing flapping about, how do you know if it is a moth or a butterfly? Both moths and butterflies are members of the order Lepidoptera, but there are some differences.

Moths tend to rest with their wings held over their back like a tent in that typical ‘moth-like’ pose. Look at some pictures of moths and you will see what I mean.

Butterflies, on the other hand, tend to prefer resting with their wings held out flat, in that typical “butterfly-like” pose. Or, more usually and rather frustratingly if you trying to see the upper side of their wings, with their wings closed above them. 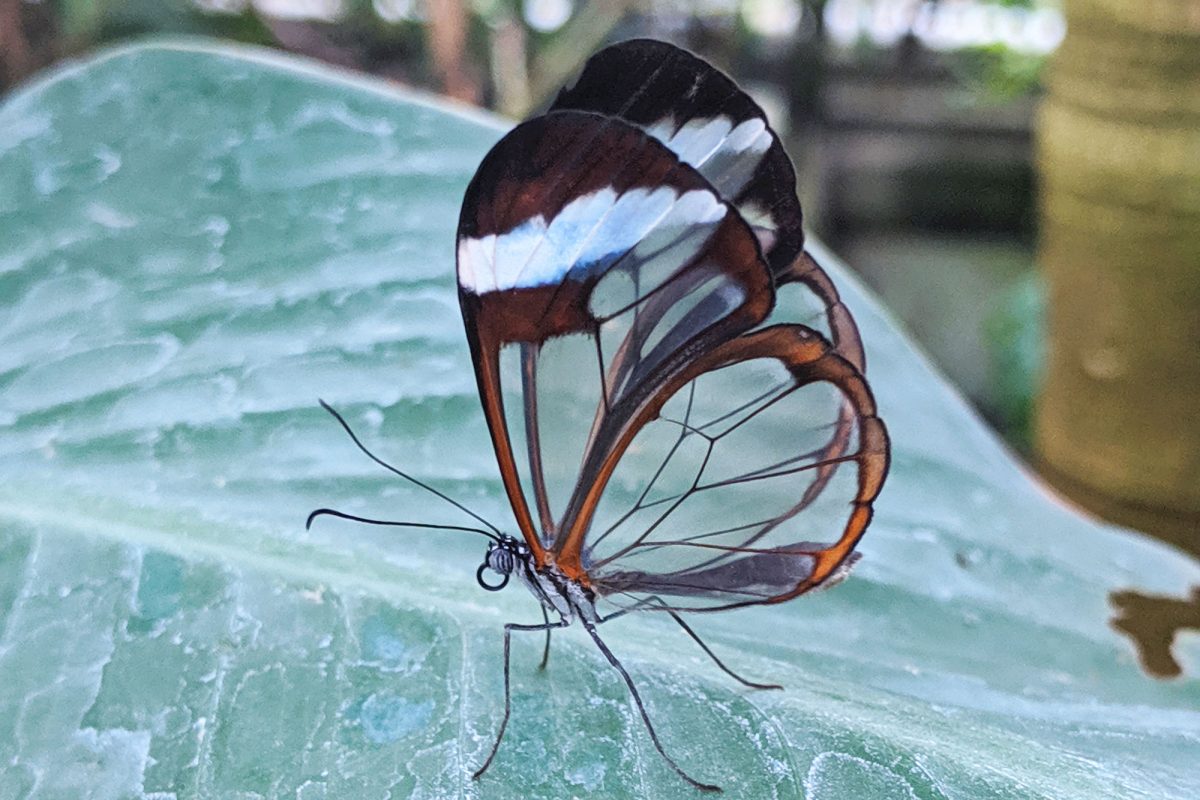 A transparent lacewing from the Butterfly House, in a typical butterfly pose with the wings closed above it

Moths’ bodies are often chunkier and hairy, they have been described as looking like a small furry mammal. Butterflies by contrast have thin dainty bodies.

Look at the antennae (if you can). Moths’ antennae are thin and thread like, or in the case of some male moths, fancy and feathery. These feathery structures help the male to detect female pheromones, identifying by scent where those females are. Butterflies have antennae with little clubs on the end, like children draw them, or sometimes the antennae are just swollen at their tips. 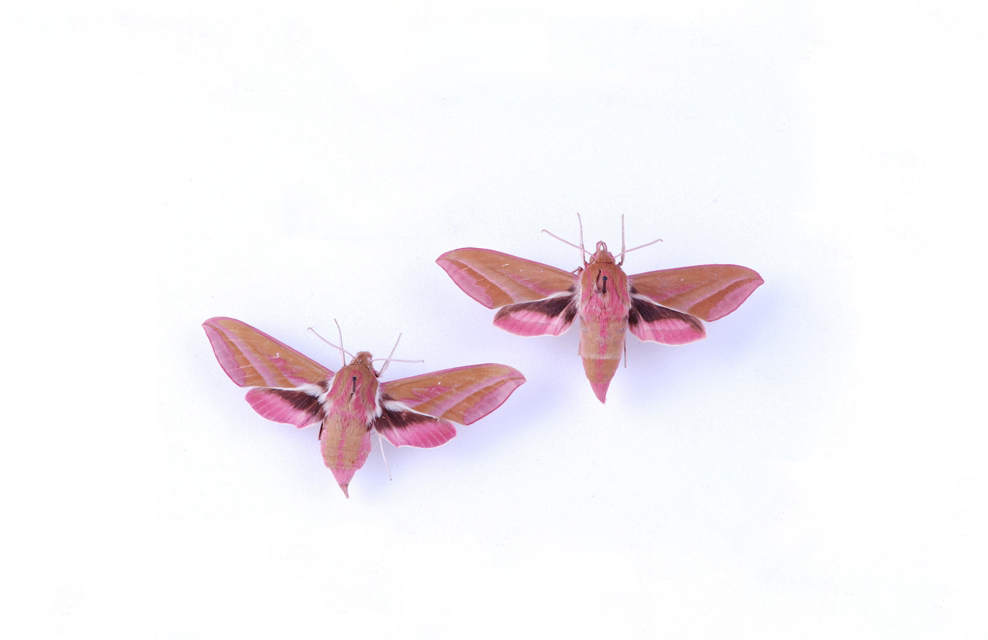 When I’m on the Nature Trail I don’t tend to watch and wait specifically for moths, but they are one of those animals which occasionally you will just see resting on a leaf. Which is exactly where I spotted this beauty last week.

At first I thought it was a withered leaf, but I decided to look closer. It’s called an Angle Shades moth (Phlogophora meticulosa). It tends to fly at night, but luckily for us often rests in the open during the day, which is perhaps why it needs its superbly camouflaged wings. It’s a pretty common moth, and unlike many moths, it’s quite unmistakable (if you manage to find it!). 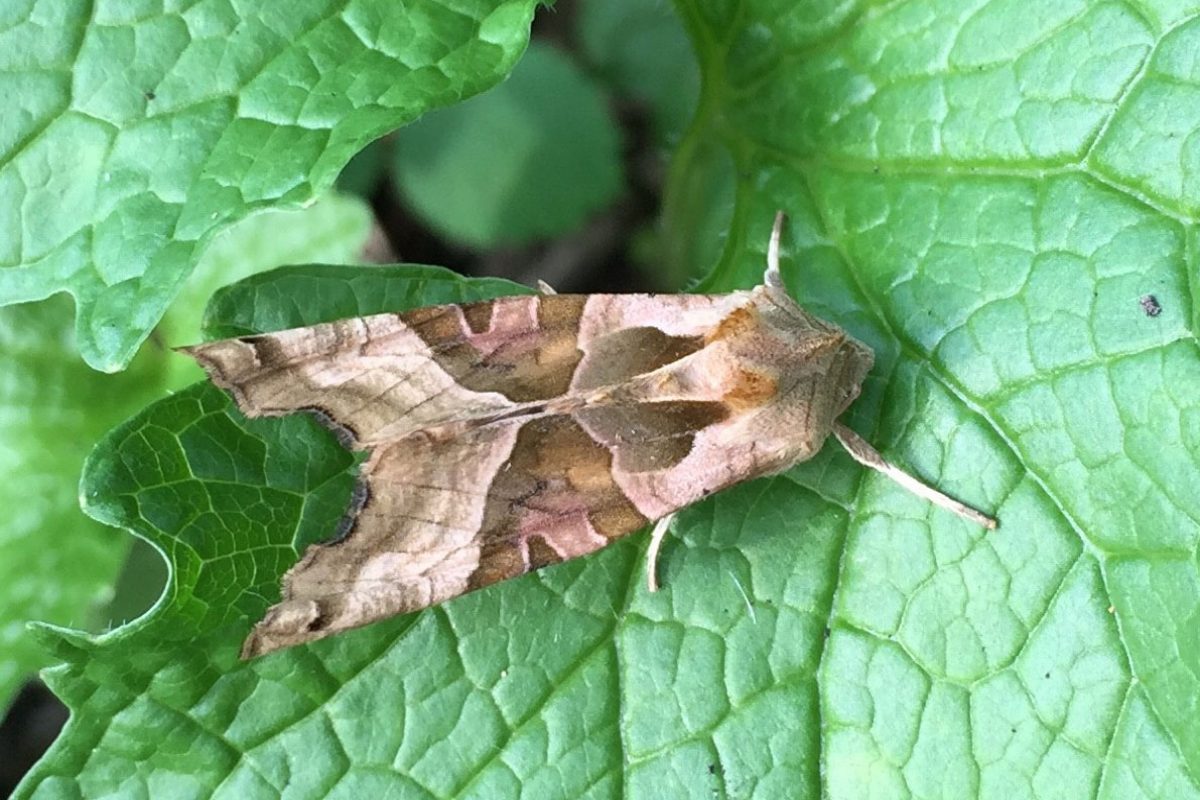 If you want to know more about moths (and butterflies) the Butterfly Conservation website is a good place to start. And the Field Studies Council publish a very reasonably priced laminated guide to day-flying moths. In fact, they produce laminated fold-out guides for lots of common animals and plants. The butterfly one is excellent.

So get on the Nature Trail, with or without your laminated guides, and keep your eyes focused on the foliage beside the path. Who knows what you might see?

Make sure that you look where you are going though, because if I am on the Trail I will be doing the same – we don’t want any accidents!

Interested in spotting moths like Daniel? See more pictures of UK moths to help you identify your spots.

A Beautiful Parasite and a Dapper Beetle

Nature Trail regular, Daniel Harwood, draws our attention to the fascinating broomrape and an interesting insect.

What has Nature Trail regular Daniel Harwood spotted on the trail as we start to move into Spring?

The Nature Trail has become popular in lockdown, as people find new green spaces to take their exercise in. Daniel Harwood has been looking at the fungi you can find at the moment.

Daniel Harwood has been bee watching on the Nature Trail. Find out what you can see blooming there now.
About the Horniman