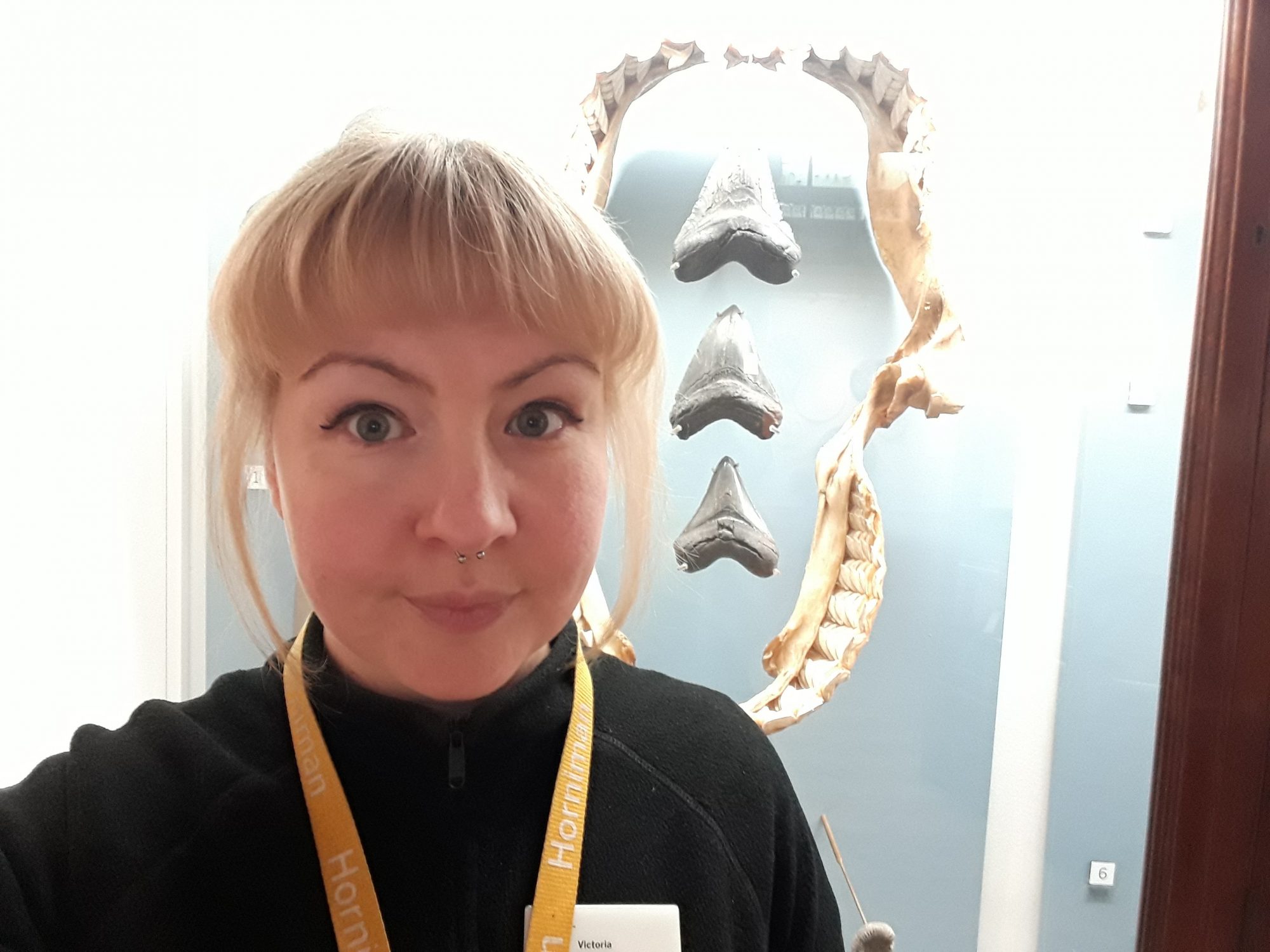 Behind the scenes Community Volunteering
In light of the lockdown, Visitor Host and Volunteering Administration Assistant, Vicky tells us her fondest memories of the Horniman Museum and Gardens.

I absolutely love working at the Horniman and being in isolation has made me think about my favourite memories of this wonderful place.

I’ve been at the Horniman since 2015, but have been visiting my whole life. I can remember as a child desperately trying to climb the iceberg and stretch my arm out as far as I could so that I could touch the Walrus, which is funny because as a Visitor Host this is now something I have to ask people not to do!

I started out as a Volunteer, then went on to work in the shop. In 2017 I went onto my current job as a Visitor Host, and at the beginning of 2019 I took up a second role as Volunteering Administration Assistant.

I feel so lucky to be working at one of the most beautiful places in London! Sometimes I take the Gardens for granted, when it’s cold, dark and gloomy outside. Then I will venture out and feel grateful that I can walk around in nature. My favourite memory of the Gardens was in 2018 when there was so much snow! I felt like I was in Narnia – it really was magical. 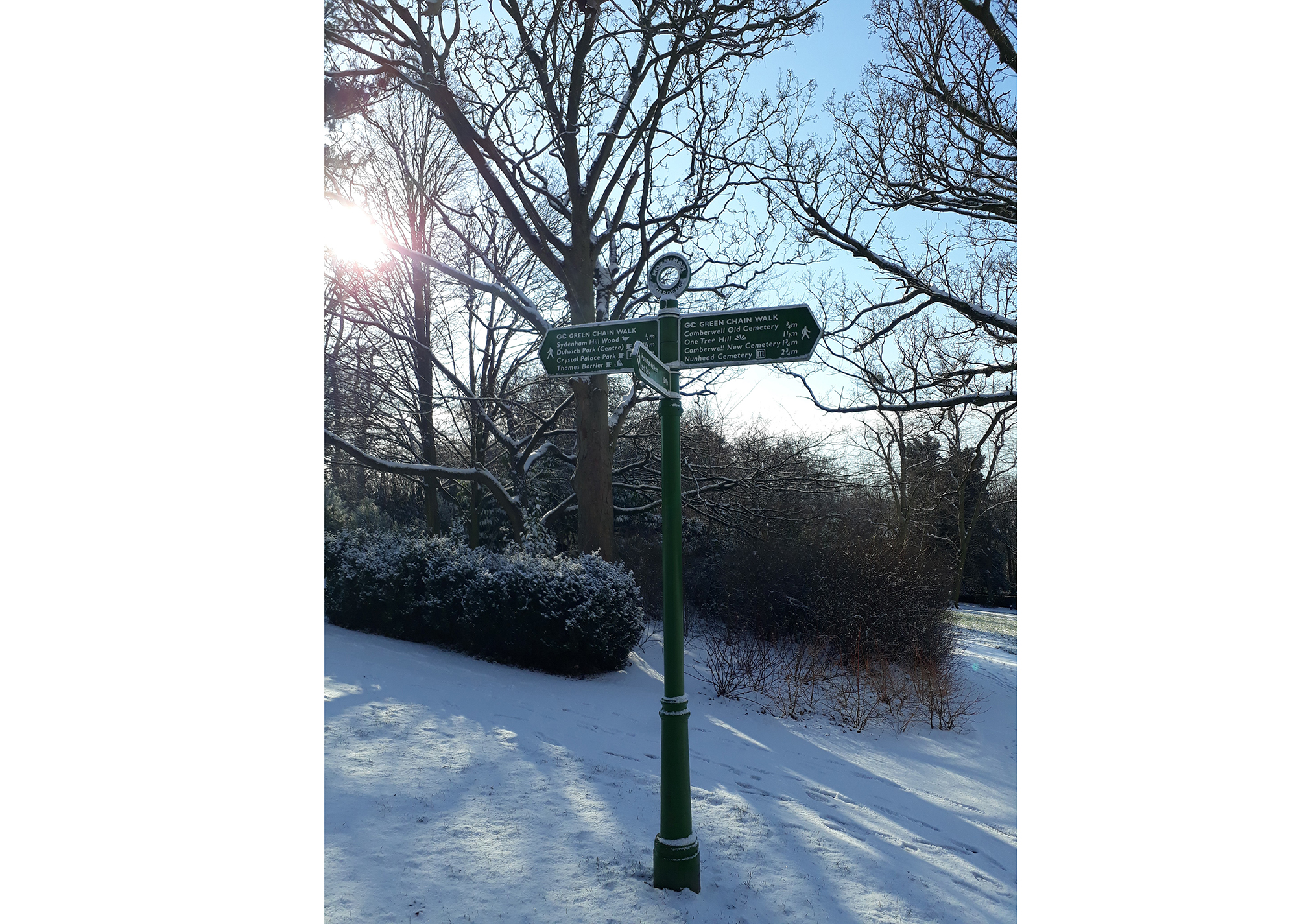 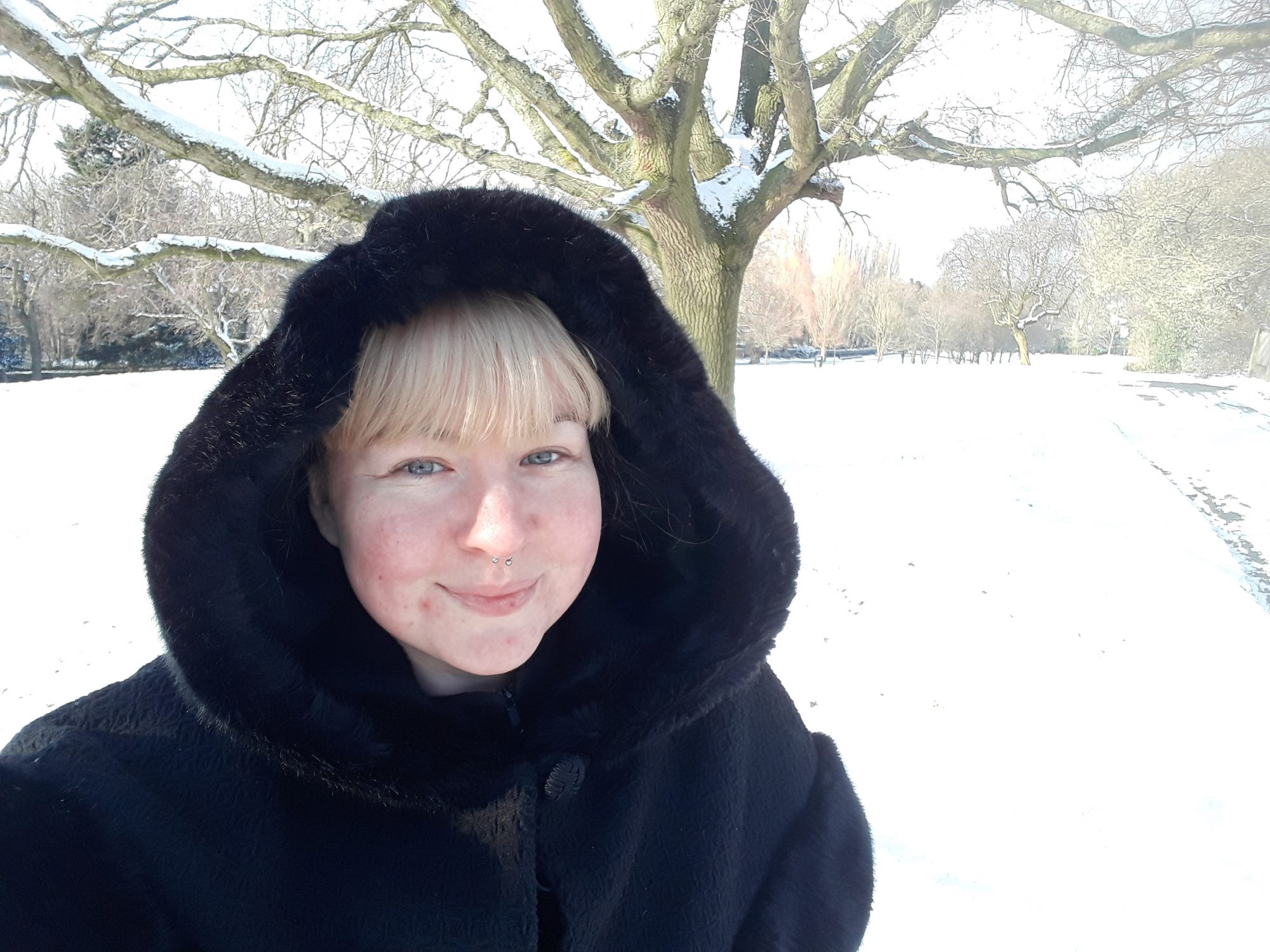 Vicky in the snow

Visits from family and friends

As a south London resident I bump into a lot of people I know while at work. Sometimes it’s arranged but a lot of the time it’s by chance. I’ve bumped into my friend helping out their child’s class on a school visit who could proudly show off to the other mums that she knows someone who works here; a friend taking their child for a day out, who I can show my favourite things in the Museum and tell them about stuff no one else knows about; an old friend I’d lost contact with on a family visit to the Aquarium, who I recognised and reconnected with; a friend nervous on a first date who I try not to embarrass; housemates enjoying the Gardens on a sunny day who I can sit and enjoy the last of the sunshine with once I’ve finished work.

My mum who knows she can come and pop in whenever I’m working in the galleries for a quick chat – although I’m not sure if that’s always a good thing. The Horniman is part of my life and the lives of those around me. It’s part of our community and it brings people together. 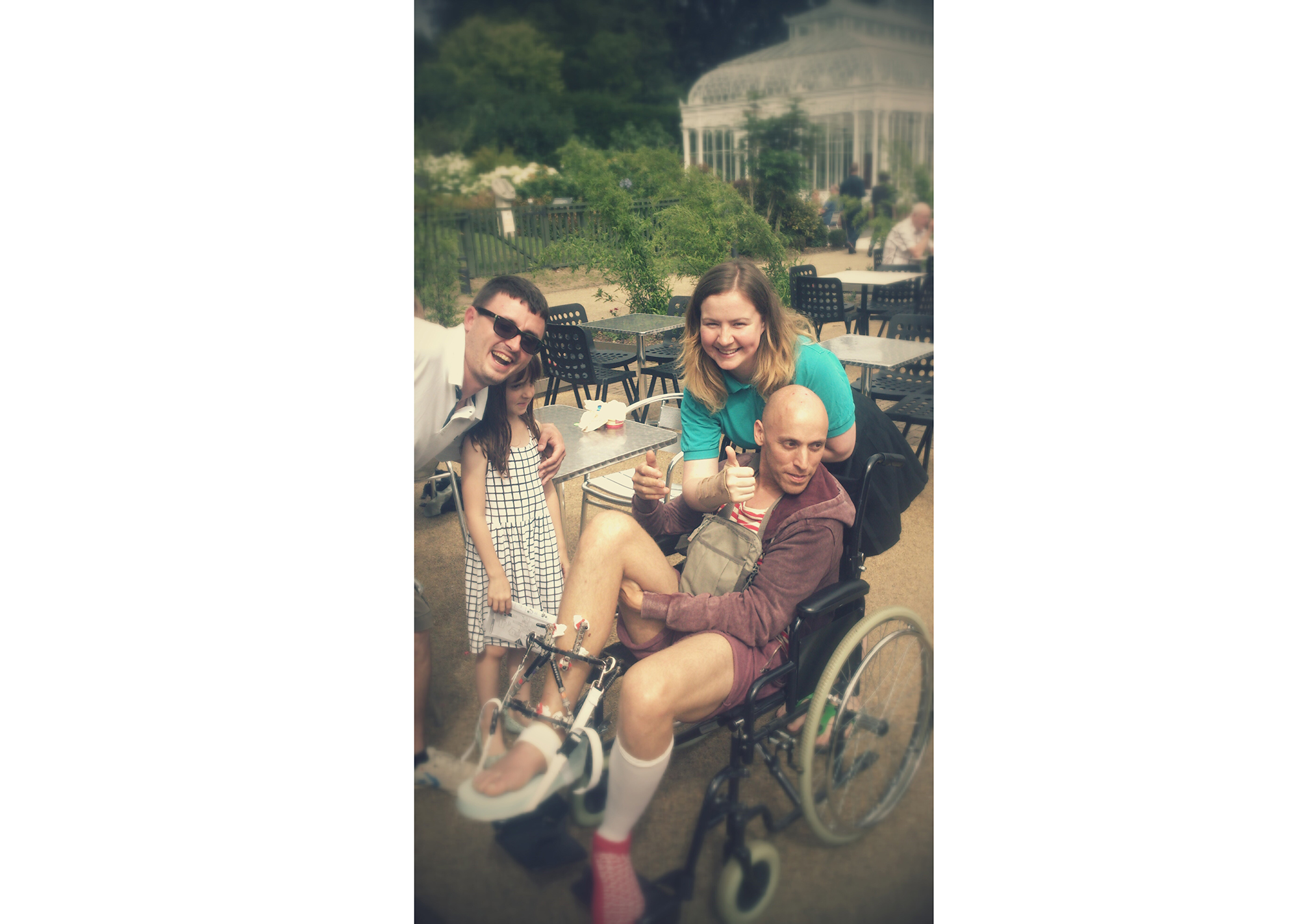 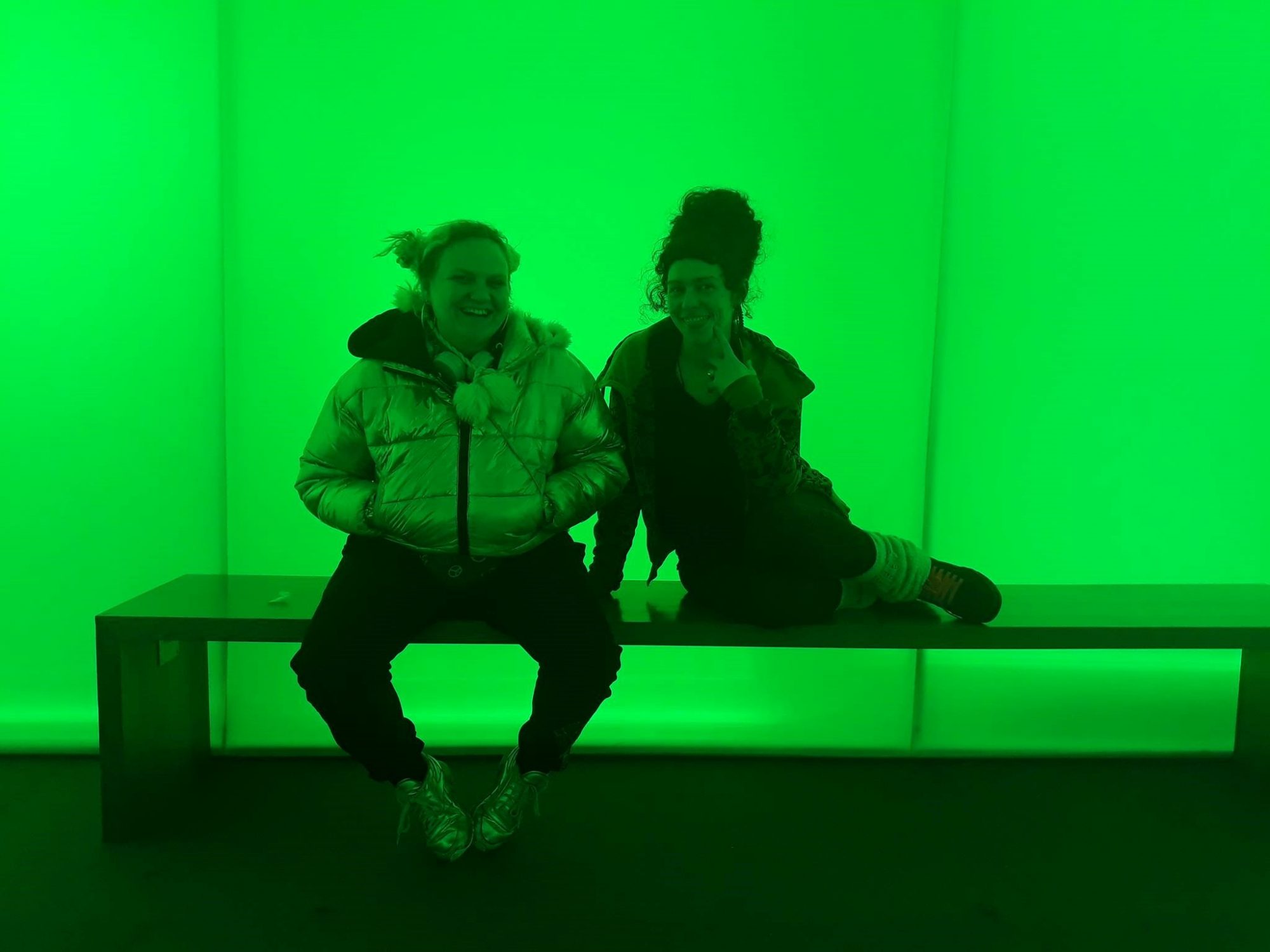 Every day I work with such an amazing bunch of people! We not only spend time together at work but also do lots of other things together such as putting on exhibitions, visiting other museums, going to parties, birthdays, engagement parties, weddings, gigs, dinner, bowling, drawing, meeting their families and many trips to the local pub. I’m constantly learning from those around me, not just by what’s on display at the Horniman. 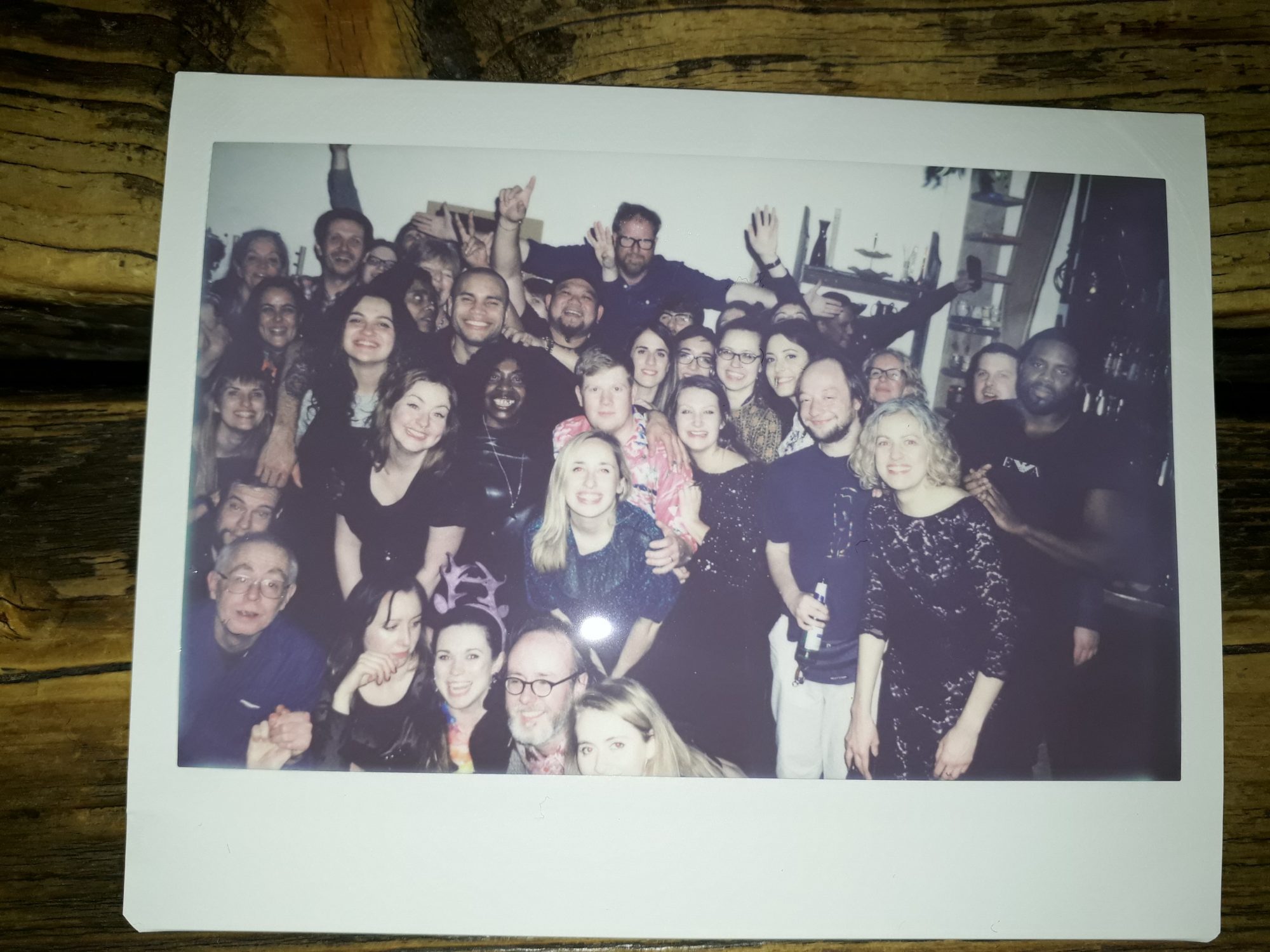 Sometimes walking around the Museum I get inspired to come up with silly ways of entertaining myself with the collections. Spending a lot of time around the same objects you can start to see an uncanny resemblance to things… 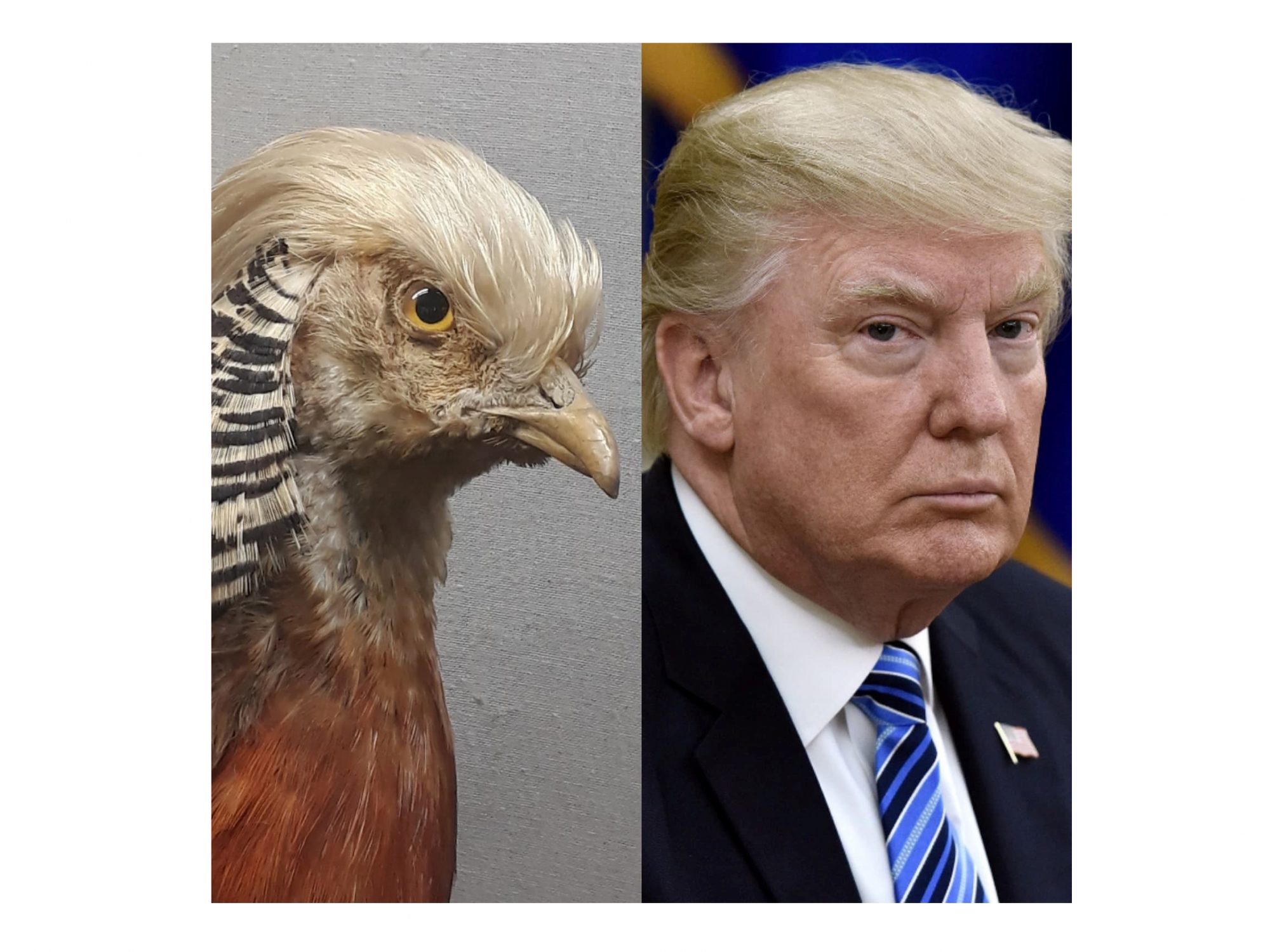 Who wore it better?

One of the jobs as a Visitor Host is to give tours to the public which is one of my favourite parts of the role. We start off by giving a Welcome Tour introduction to the Museum and its history. We are then invited to create a Curiosity Tour which can be about whatever we like in the museum

I was so happy when I got to do my own tour! With help from the curators and other members of staff, I wrote a tour on Fossil Folklore. On this tour I look at five objects in the Natural History Gallery and discuss how before people understood fossilisation and evolution, the curious shapes and structures of fossils were often explained through folk tales and myths.

I feel these objects show our need to share stories with each other and that as. As a species, we are seeking to explain the world around us and through this have created weird and wonderful folklore.

Vicky in the Gallery

One of my jobs is to help look after the 200 year old Apostle Clock and wind it twice a week to keep it in good working order.

We are helped by the Collections team and can always turn to them for advice ifwe need it.

Very little is known about the provenance of the clock. It is a model of the Strasbourg Cathedral clock, made in Germany in the mid-19th century, probably by peasants in the Black Forest, who used many older parts. At 4pm the clock comes to life, showing scenes of Christ’s life (the nativity, Christ talking to the Elders in the Temple, and the three Marys outside the sepulchre). In the chamber above the Apostles pass before their Master, each bowing their head. The last, Judas, turns his back. The four side chambers contain gongs and represent the Ages of Man, from childhood to old age. The figures move to the accompaniment of chimes playing a 13 bell carillon, thought to be tunes from old German hymns. The reason this all happens at 4.00pm is that this time was Victorian tea time and a very important part of the day.

I was lucky once to meet three generations of the same family who told me their stories of how they loved the clock. They would come just to see the figures move at 4pm and missed it when it was taken away for repairs. The grandmother would come as a child with her family to see the figures. When she, had a child she would take her to see the object that had fascinated her. They then came to the Museum together to show her granddaughter the clock for the first time.

The Apostle Clock has been on display at the Horniman longer than most objects. When the Museum opened in 1901 the clock was in the very same place it stands today. Charles Harrison Townsend, architect of the Bishopsgate Institute and Whitechapel Art Gallery, designed the Museum with the Apostle Clock in mind. When entering the Natural History Gallery you can see the relationship between the clock and the space. The ceiling arches over the clock at the north end of the Gallery, framing it perfectly.

To take care of an object that has so much history and is an important part of people lives fills me with pride. 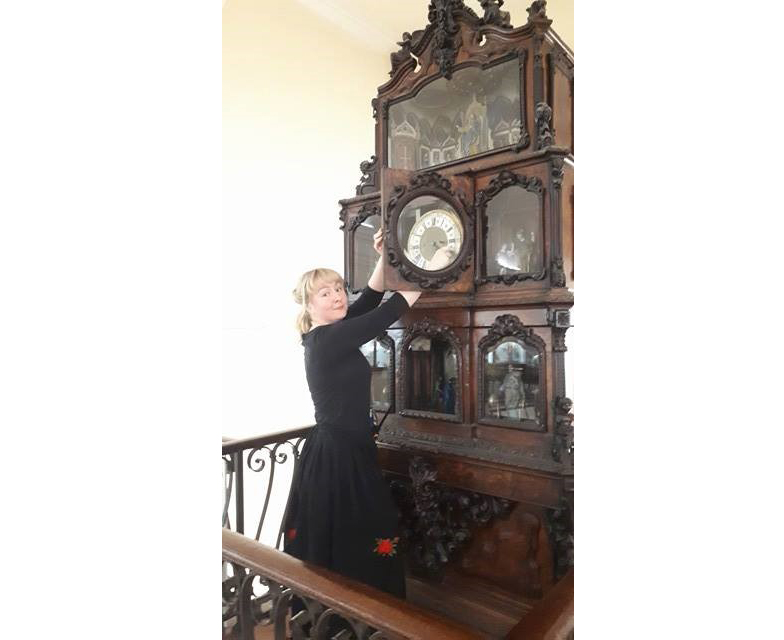 The jellyfish tank is my favourite display in the whole Museum.

It’s so other worldly and calming, I could watch them all day. Last year, as part of the #beatplasticpollution campaign to coincide with World Oceans Day on 8 June, the Aquarium staff replaced the jellyfish with plastic bags to highlight plastic pollution in the oceans. Don’t worry, the jellyfish weren’t harmed. This was mesmerising and really made me think about the impact we are having on the world.

More than 480bn plastic drinking bottles were sold in 2016 across the world, up from about 300bn a decade ago. If placed end to end they would extend more than halfway to the sun. By 2021 this will increase to 583.3bn, according to the most up-to-date estimates from Euromonitor International’s global packaging trends report.

Efforts to collect and recycle the bottles to keep them from polluting the oceans are failing to keep up and many end up in our oceans. Plastic bottles are just the tip of the iceberg and life in the oceans is suffering due to our consumption and lack of action. Projects like this one in the Horniman Aquarium help to bring this issue to people’s attention. 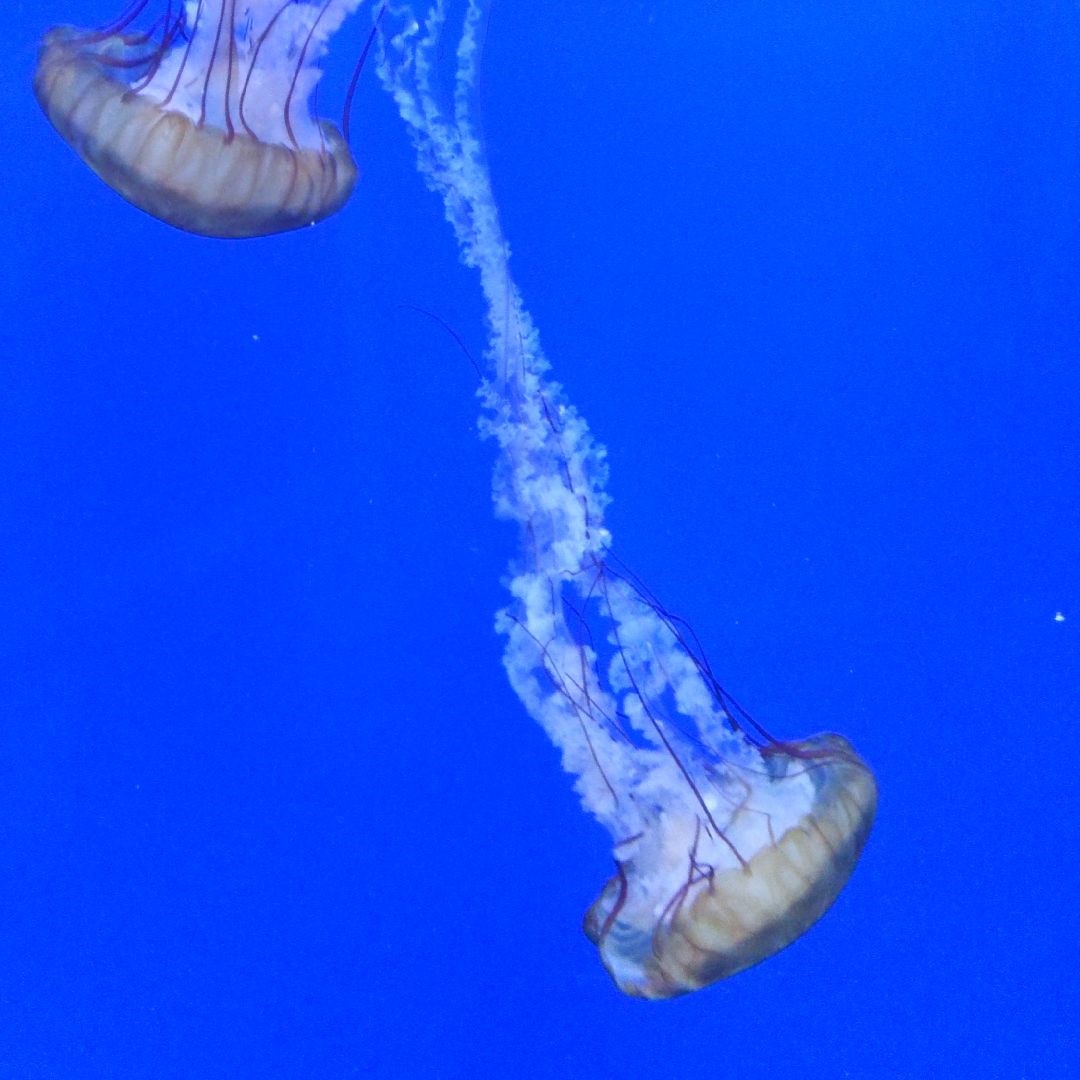 Jellyfish in the Horniman tank 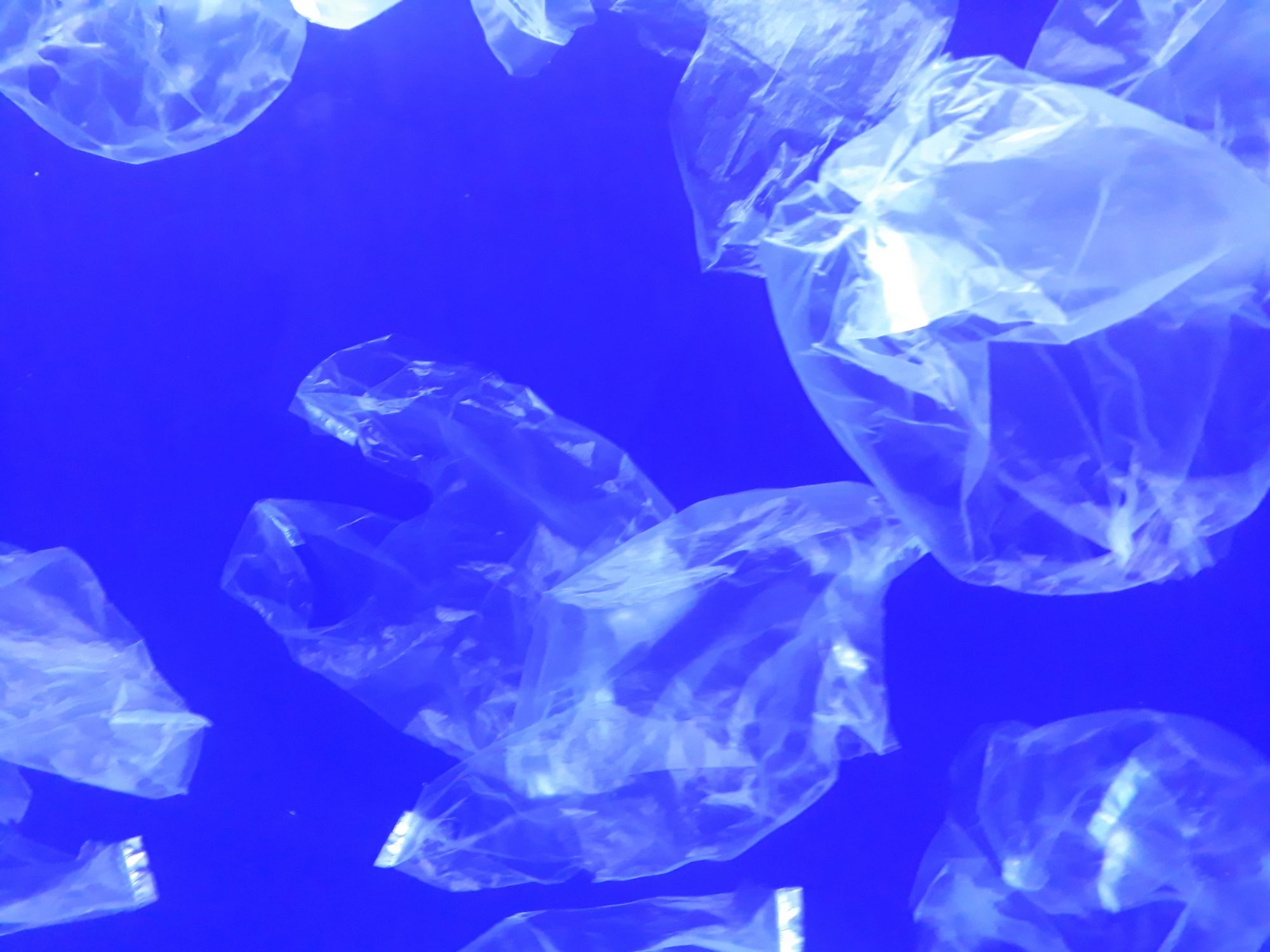 Since being at the Horniman I’ve really got into drawing. I’m inspired by the collections and also by visitors who often come to draw at the Museum.

Like the visitors I also draw in the galleries when no one is around. It can be very peaceful towards the end of the day and it’s a nice way to focus and learn more about the objects on display.

Colleagues have set up the ‘Horniman Drawing Club’ for staff members to access the galleries after all the visitors have gone home and discover and draw objects from the collections, even ones that aren’t usually on display.

It’s also really nice to spend time with people that I work with and share a common interest. Who would have known there’s so many talented artists doing all sorts of jobs around the Museum!

It can be so easy to forget that people are so much more than their job role. I’m glad staff take the time to support each other’s creativity. 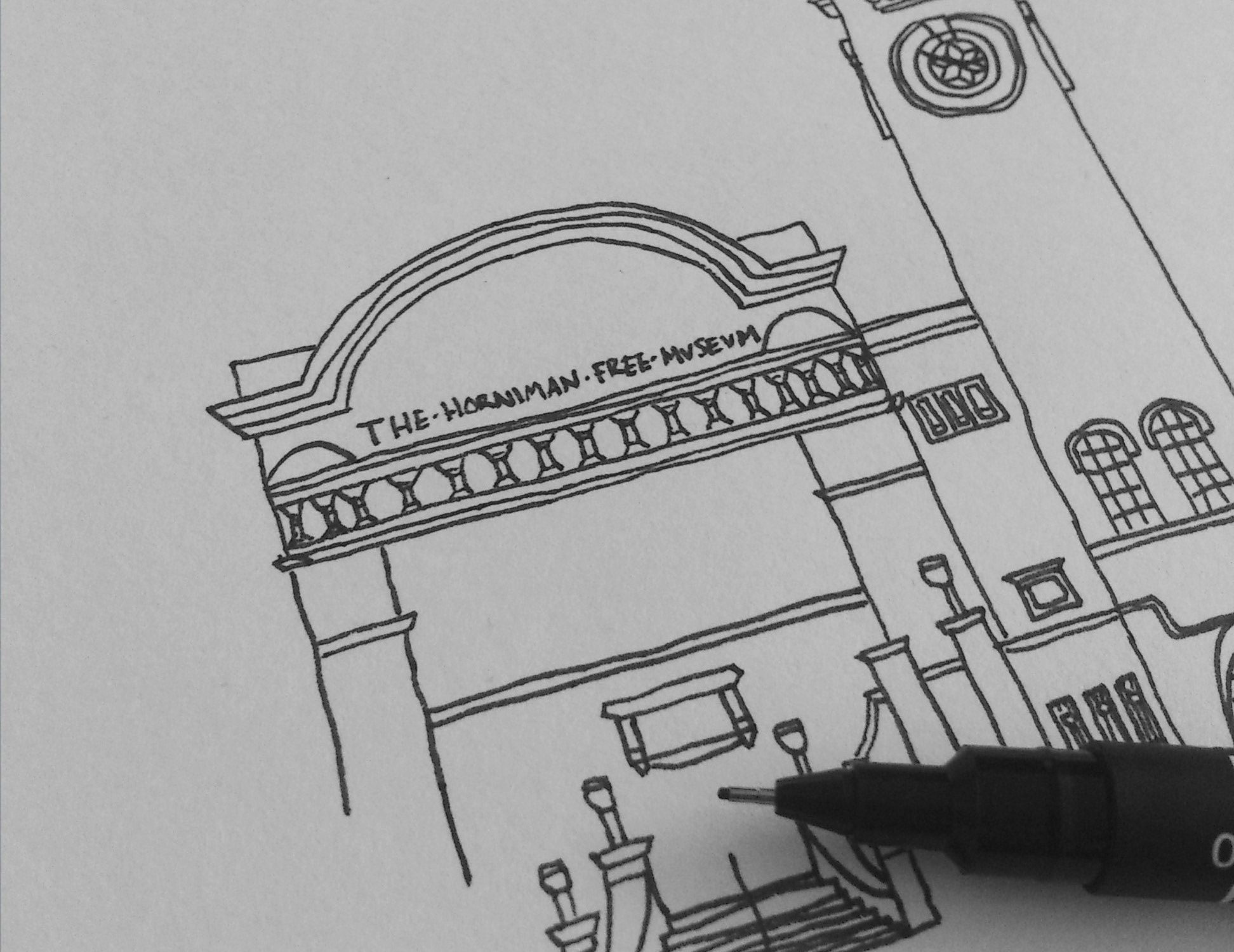 Drawing of the Horniman by Vicky

Discovering more about the collections

One of the perks of working at the Horniman is learning about the collections and seeing the objects behind the scenes.

Curators often give staff tours of the galleries to talk about objects on display. I have learnt amazing things such as the difference between the noises made by big and smaller cats – purring vs roaring; that the Wai Wai people think of time as an ideology; and how through Project Coral, the Horniman is the first place in the world to have successfully bred coral in captivity.

One of my favourite talks has been by Dr Dan Byrne-Smith, our Art, Design and Natural History Fellow, who talked about the Horniman being a time machine. 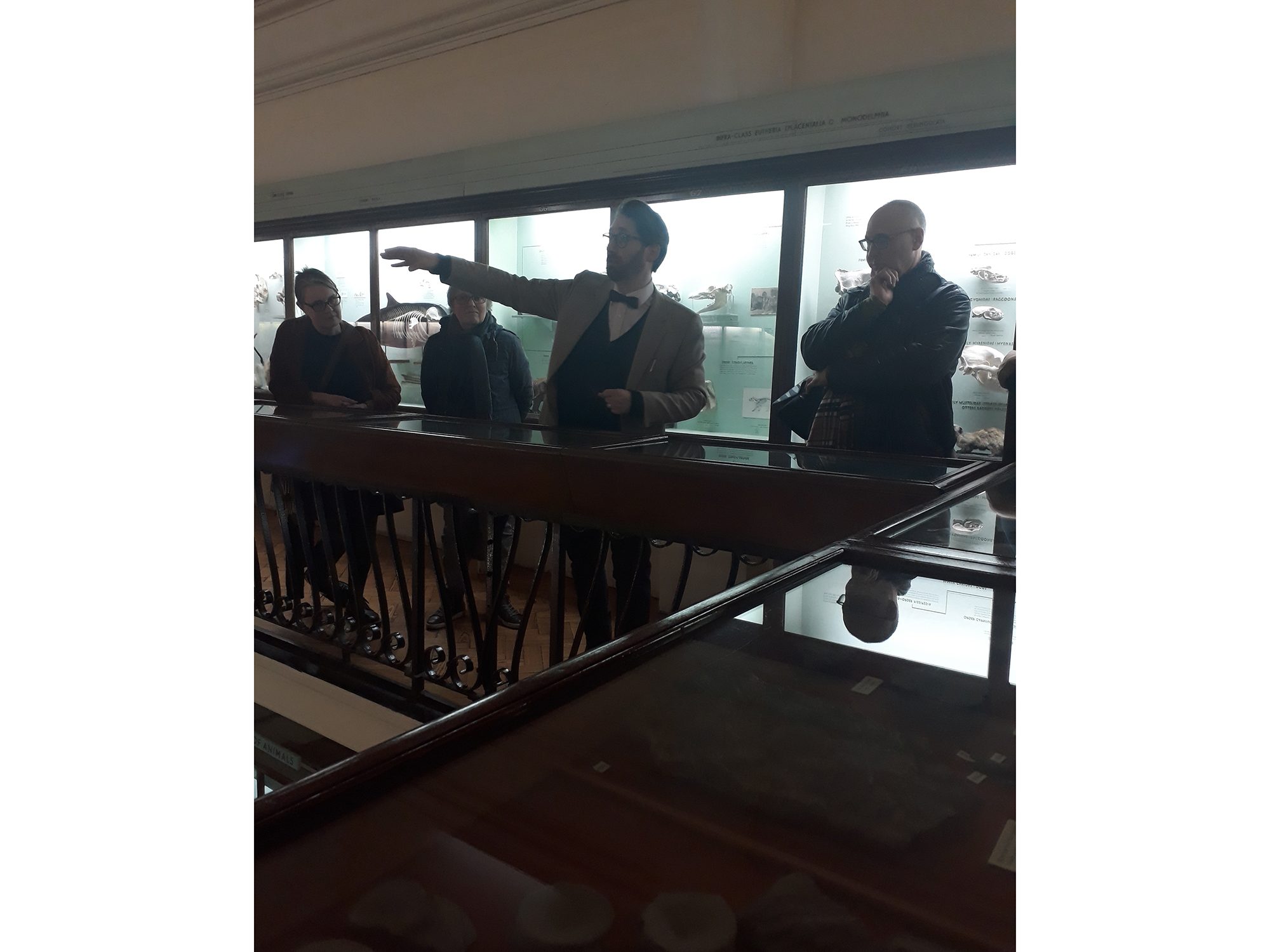 I started at the Horniman almost on a whim, inspired to go back because of my fond memories of the place as a child. I had no idea is would become such an important part of my life.

To be part of something that brings so much joy to somany is a very special thing. I genuinely love the Horniman and can see that those who are part of it and visit it do too.

Fredrick Horniman set up the Museum to ‘Bring the World to Forest Hill’. Now people from all over flock to the Horniman, and the work that goes on in Forest Hill inspires those around the world.

With preparations underway for new displays showcasing the Horniman's fossil collection, Paolo Viscardi gives us a look at some of the stories he hopes to tell.

A Trip to the Taxidermist

Every now and then some of our handling collection objects need a bit of a spruce up. Maria from our Learning team has blogged about taking a few of our taxidermy specimens for some specialist treatment.

Visitor Host Vicky tells about some of the myths that surrounds fossils, which inspired her gallery tour at the Horniman - fossil folklore.