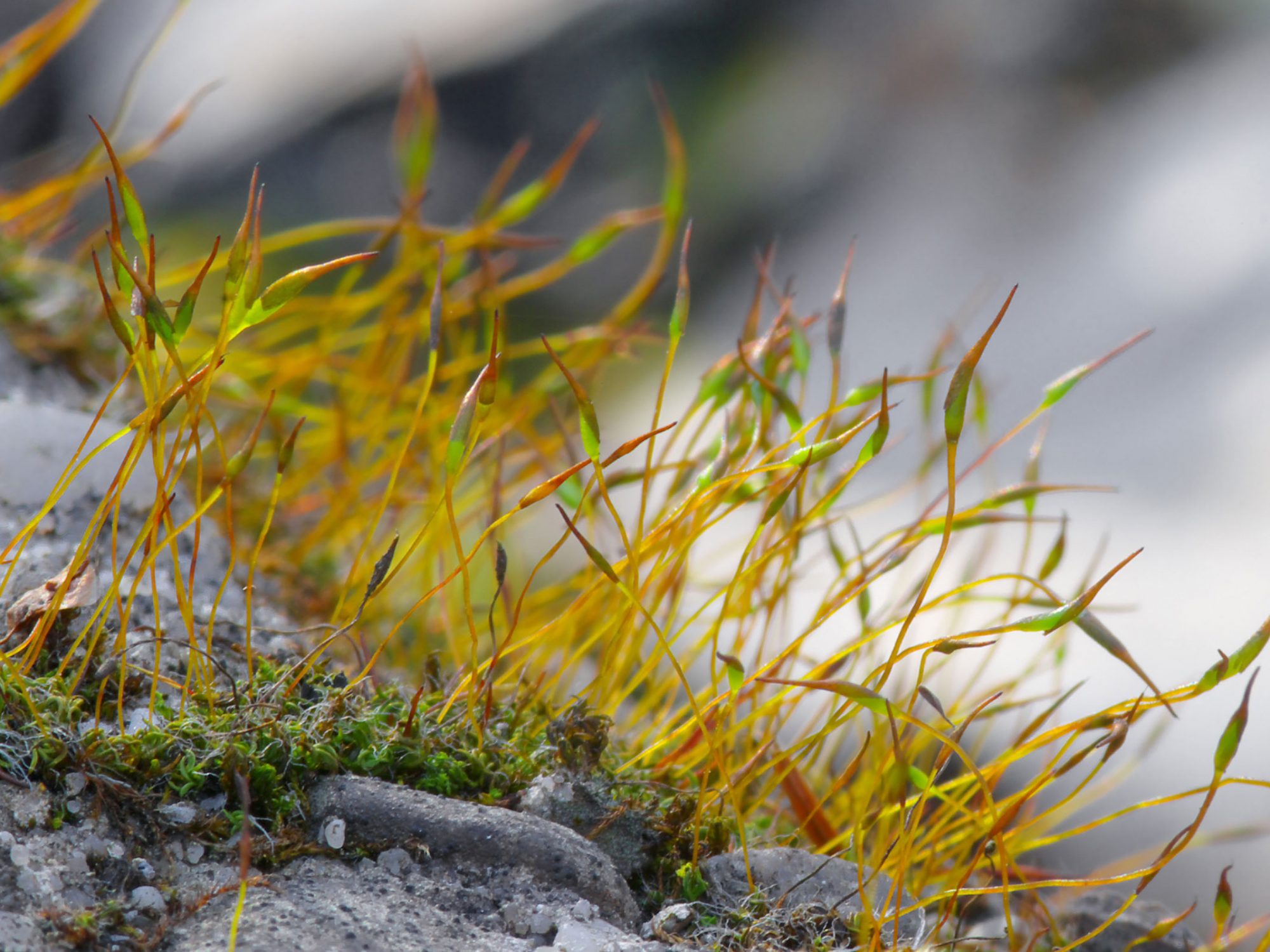 Gardens Natural world
Nature Trail regular, Daniel Harwood, has been searching for moss, and talks about how you would go about identifying the different types.

I’m walking along the Nature Trail one morning. “Come on boys, concentrate!” shouts the football trainer from the park. For a moment I think he might be shouting at me, as my mind is wandering.

I have decided to have a look for some moss. I have been putting off my foray into the world of moss identification for some time. I bought a Field Studies Council laminated guide to mosses and liverworts last year, but a lot of them look rather similar. Nonetheless, I have the guide with me, and there is not much else about, so moss-hunting I go.

After a few minutes, I conclude that if you wanted to run a moss party on the Horniman Nature Trail you would struggle. All I have found is some green algae on a fence, which I don’t think counts as moss, although moss evolved from algae, so it’s sort of a moss-ancestor. Moss-ancestors do not feature in my guide though, so I must try harder.  I eventually locate a green patch of leafy moss on a pile of logs, which if the guide is correct, looks like common pocket-moss (Fissidens taxifolius). 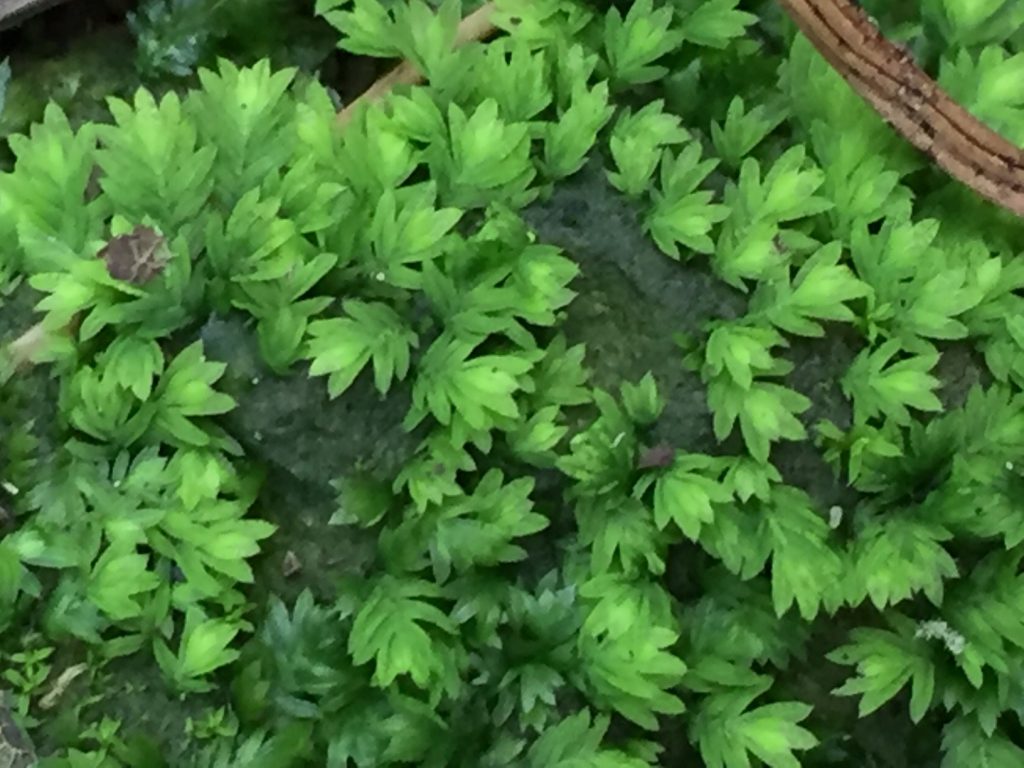 When I get home and double check on the Naturespot website, the photograph on the website looks like what I saw, but it has the ominous red camera logo beside the photo. This means something along the lines of ‘impossible to identify unless you are a Professor of Moss’. However, the accompanying description says the “nerve” (the central leaf vein on a moss is called a nerve rather than a midrib) is, “excurrent and protrudes as a short point”.

Well, my plant has a nerve that sticks out a bit at the end which I assume is what that means, so I am calling my moss common pocket-moss, and it’s going on the list.

There is a reason, after all, why there are more birdwatchers than mosswatchers. Later, I look up the British Bryological Society (BBS) website. Bryophytes is the name given to the group of plants include mosses, liverworts and hornworts. The website’s introductory page starts like this,

Because of their unassuming nature and small stature, bryophytes are easily overlooked or even dismissed as boring, but their beauty and complexity under the microscope easily puts them on a par with their higher plant relatives.
British Bryological Society

The website has a well-written introduction to bryophytes, and more importantly for you and I, some good clear tips for beginners.

Bryophytes are a crucial and central part of our country’s flora. Only one fifth of the total number of European species of vascular plants (trees, flowers and grasses) live in the UK and Ireland. Whereas for bryophytes, 58% of the European species make their home here. Bryophytes like it here, because it is damp and warm. 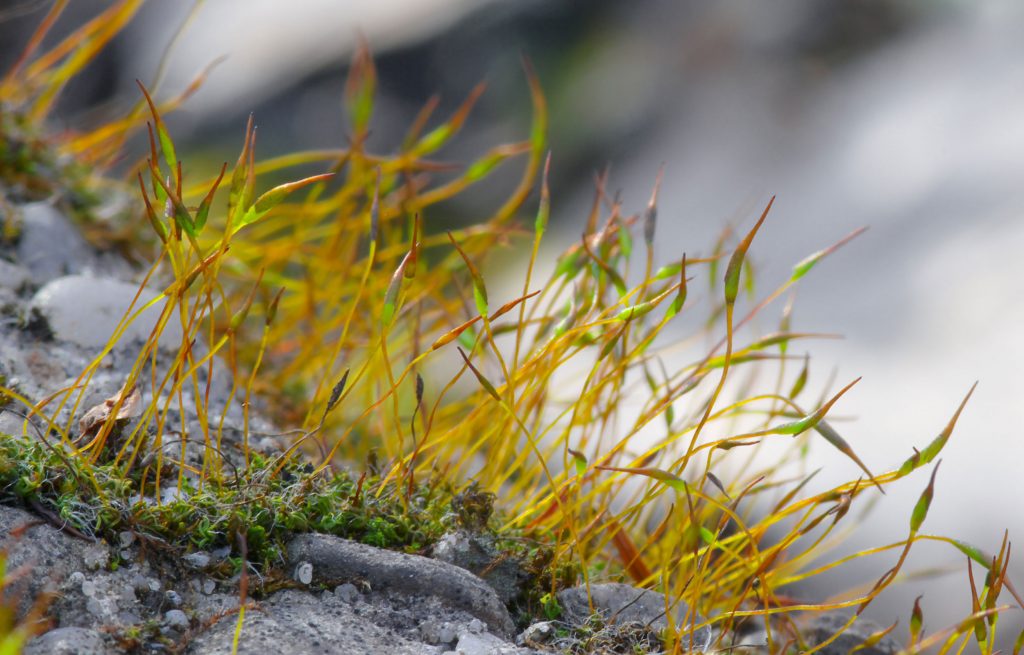 Tortula muralis – commonly seen on the tops of brick walls, everywhere (but not on the Nature Trail!), Kruczy89 via wikicommons CC BY-SA 3.0

Despite this, according to my son who attended a talk by a British bryologist, it is hard to enthuse young botanists in bryology – and hard to convince British universities they should be running courses on bryology within their Botany departments.

This is very sad but does not surprise me. British people understand the importance of the tropical rainforest, but not our own Atlantic rainforest with all its mysterious ferns and bryophytes. Even the poor British Bryological Society have to admit that bryophytes are dismissed as boring. They need to be more positive!

There are 1,000 species of bryophyte in the UK and Ireland. 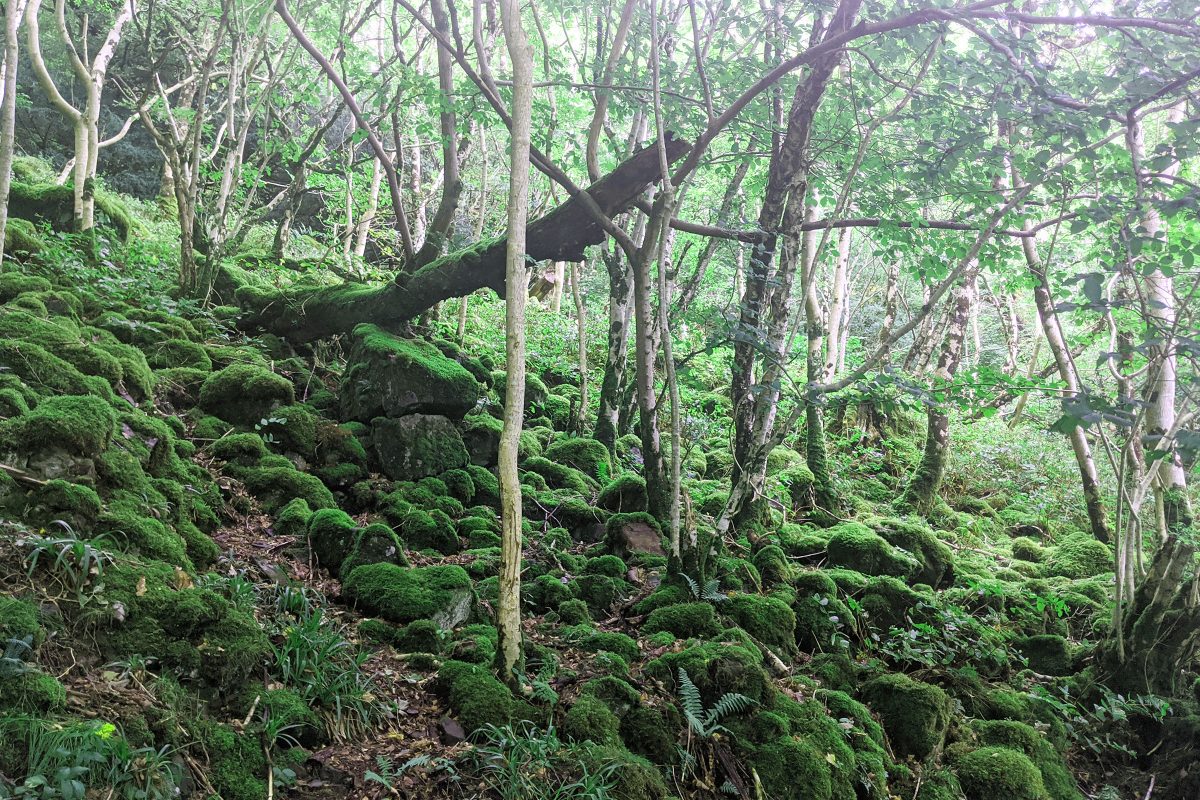 Bryophytes photosynthesise, which means that they can make sugar from sunlight with the help of chlorophyll (the green pigment in plants, which does not occur in fungi). That means that, like other plants, but unlike fungi, bryophytes are green.

Flowers and trees have roots, and firm stems which means they can stand upright, and they have a vascular system. This means tubes inside the plant can transport water and minerals up from the roots, all round the plant, and move nutrients like sugar from the green leaves where it is made (by photosynthesis) to all other parts of the plant.

Bryophytes have no proper roots, no vascular system and no firm stem. That is why they are small, low and floppy.

Because bryophytes have no vascular system it also means they cannot shift water up from the soil and distribute it around the plant, and so they dry out easily. Many of the leaves are very thin, just one cell thick, which means they can absorb water quickly from their environment but also that they dry out fast. When dry, they enter a state of dormancy but can be revived with a soaking. 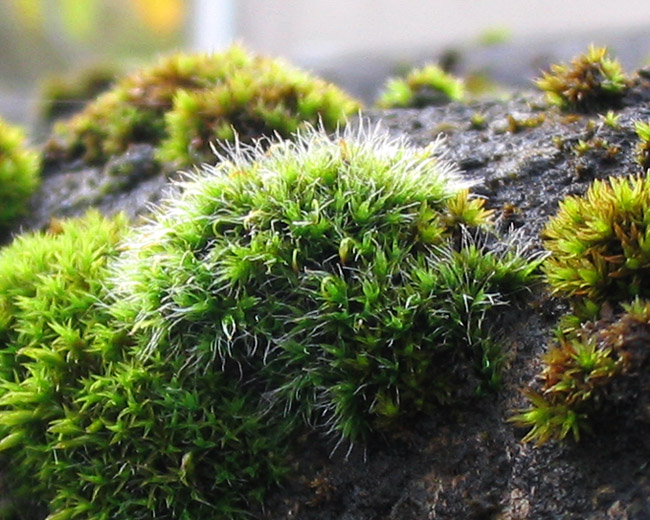 Their leaves are often intricate and complicated, to maximise the area for photosynthesis, optimise water absorption and minimise water loss. This means that under the hand lens or microscope you can see their exquisite shapes, they are genuinely jewel-like with the most gorgeous patterns.

One of the facts I found most astounding about moss is that moss sperm, which is produced in a structure called the antheridia, has little flagellae, rather like mammalian sperm. It actually swims through a film of water on the moss plant to the female sex organ, known as the archegonia, where fertilisation takes place and spores produced. At school we were taught plants cannot actively move, well, moss sperm can.

The fertilised spores sit on structures called sporophytes, which look a bit like antennae, and stick up out of the carpet or cushion of and release their spores, when conditions are dry. You might have even noticed these little sporophytes protruding from moss cushions on walls and pavements near where you live.

There are three types of bryophyte; moss, which you are probably at least vaguely familiar with, liverworts, which are leafier and can look like a mass of flattened tissue, and hornworts, which are rare, look a bit like moss but have reproductive parts which look like horns.

Bryophytes have in the past been thought of as ‘primitive’ plants. But they have been on this planet for around 500 million years, which means they are resilient, and able to adapt and find new niches to live. How long will humans be around? 600 million years? I doubt it.

Lastly, just to remind you it’s fungi season on the Nature Trail, here’s a splendid Dryad’s saddle (Cerioporus sqaumosus), I found. Keep your eyes open and enjoy the trail! 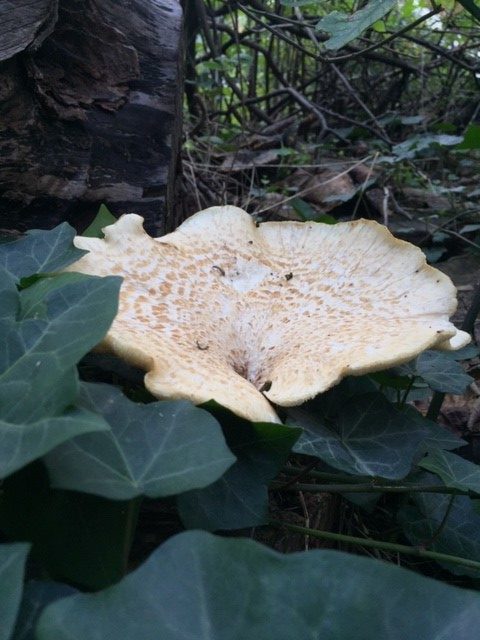 It’s mushroom season on the Nature Trail. Spot ones like this dryad’s saddle, Daniel Harwood

Recording the Wildlife of Leicestershire and Rutland | NatureSpot

The Nature Trail has become popular in lockdown, as people find new green spaces to take their exercise in. Daniel Harwood has been looking at the fungi you can find at the moment.
Display
Free

9am – 4pm
The Horniman Nature Trail is the oldest in London. It…
Find out more
Activity

Make the most of autumn with these simple, fun activities.
Find out more

Daniel Harwood has been looking at the trees on the Nature Trail. How can you identify them in winter without their leaves?

Nature Trail regular Daniel Harwood has spotted something spooky looking at the bottom of our Gardens.
About the Horniman