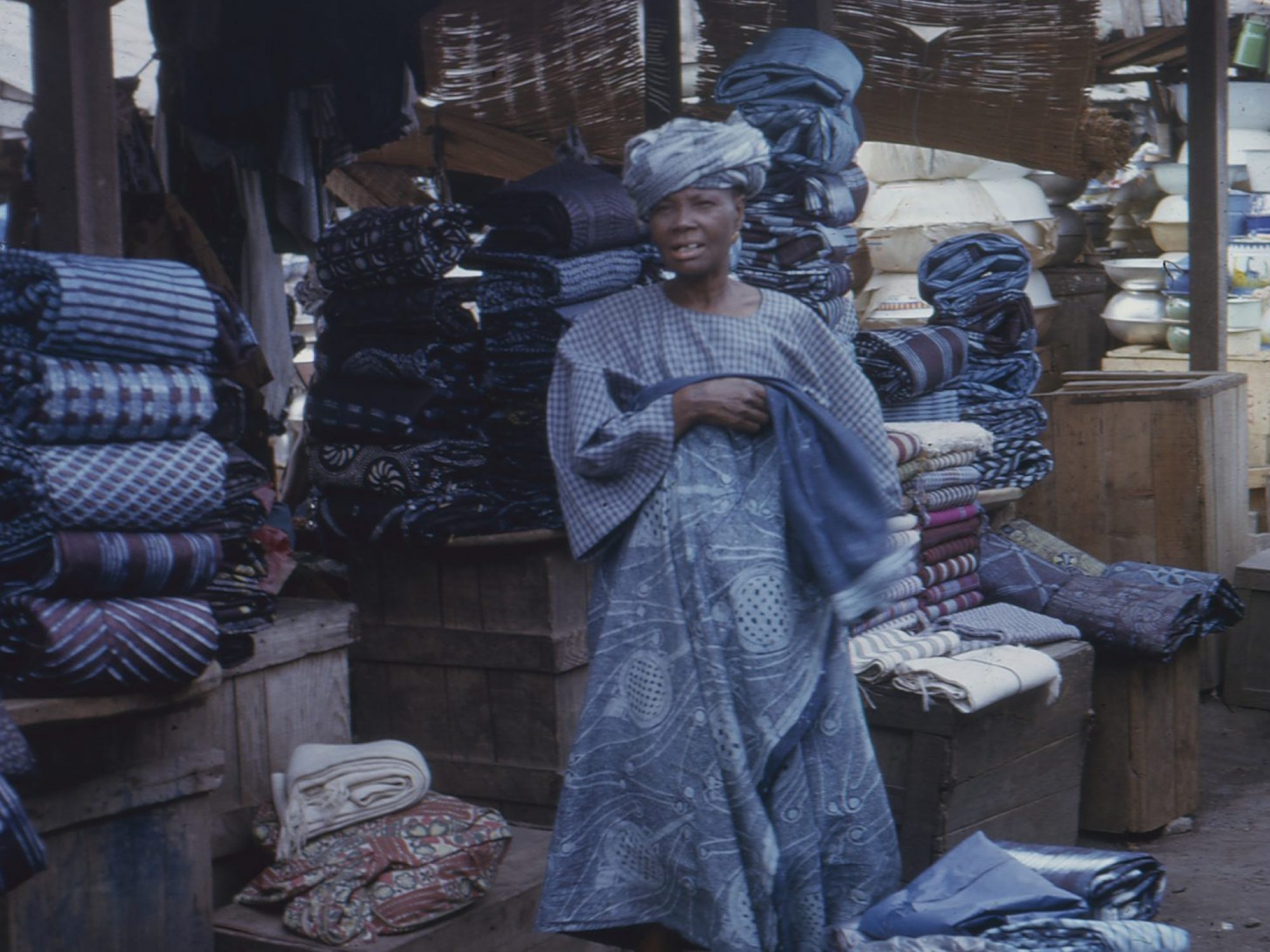 Anthropology Nigeria60
Image Historian and Director of Joliba Magazine, Amanda Kirby Okoye, has responded to Nigeria60 focusing on the production and iconography of Adire cloth from south-western Nigeria.

Nancy Stanfield studied at the Royal College of Art from 1923 to 1928, the Victoria and Albert Museum and the Central School of Art and Design.

She lived in Nigeria with her husband Dennis, between 1948 until 1967. Stanfield was a lecturer in teacher training in Western Nigeria between 1954 to 1963 and wrote A Handbook of Art Teaching for Tropical Schools in 1958. She became interested in Nigerian crafts, particularly weaving and dyeing, writing several articles on Adiré cloth.

Nancy Stanfield was commissioned in 1966 by the Horniman Museum to make a collection of all the tools, materials and apparatus used in the crafts of Adiré weaving, pottery, spinning and indigo dyeing, as practised today in the Western region of Nigeria. At the time she was working at the Department of Forest Research in Western Nigeria. Stanfield had been inspired by a visit to a market in South-West Nigeria in 1948. Her collection was exhibited at the Horniman in 1967.

The first time I heard about Nancy Stanfield was when I was researching for an exhibition I was planning on Nigerian cloth and communication.

I obtained a book she had compiled, along with Doig Simmonds on Adiré – It was one of the first books on the Yoruba tradition of indigo resist dyeing.

Adiré is a “resist-dyed” cloth produced and worn by the Yoruba people of southwestern Nigeria in West Africa. The Yoruba label adiré, which means “tied and dyed,” was first applied to indigo-dyed cloth decorated with resist patterns around the turn of the twentieth century.

With the introduction of a broader colour palette of imported synthetic dyes in the second half of the twentieth century, the label “adiré” was expanded to include a variety of hand-dyed textiles using wax resist batik methods to produce patterned cloth in a dazzling array of dye tints and hues.

As a distinctive textile type, adiré first emerged in the city of Abeokuta, a centre for cotton production, weaving, and indigo-dyeing in the nineteenth century.

Though pattern dyeing in Indigo was a technique known to several West African tribes as well as the Yoruba of Western Nigeria, other groups also used similar techniques, including the Sarankole of French Guinea and another Nigerian ethnic group, the Tiv.

The Yoruba have perhaps developed it to greater perfection than anybody else and the ancient technique is still holding strong despite its more modern competition in techniques.

The women discovered that the imported white cotton shirting was cheaper than handwoven cloth and could be decorated and dyed to meet local tastes. The soft, smooth texture of the imported cloth, in contrast to the rough surface of kijipa cloth, provided a new impetus for decoration.

In a 1957 ‘Nigeria Magazine’ article, it described the women buying “white shirting in pieces of ten yards (for just over a pound) and this is cut into four pieces. These are then dyed and then sewn together to make two women’s wrappers” though white shirting material was often used; luxury editions were made in velvet.

Abeokuta remains a major producer and trade centre for adire, but Ibadan, a larger city, has developed a nucleus of women artists who specialised in hand-painted adire eleko. The wrapper design Ibadandun (“Ibadandun” meaning “the city of Ibadan is sweet”) is popular to this day.

Three years before independence, Susan Wenger And Ulli Beier wrote an article for the Nigeria Magazine on the art of cloth pattern dying, Adiré.

The following images are from the Nigeria Magazine archives accompanied by excerpts from the article.

Photo: Adire used as a head tie for a young child 1957

Salt ….dye bae 1957
Photo: Testing dye against the light. It must be given a rest when it turns black.

In Wenger and Bier’s article, they described two entirely different techniques of pattern dyeing are practised by the women. The first method consists of sewing or tying the cloth together in certain places before dying.

In this way, patches of cloth will remain untouched by the indigo vat and will appear as a white pattern on the dark blue cloth. This is the original method as the Yoruba name batik indicates. “Adire” means literally: to take, to tie and dye.

The second method, which is called “adire eleko” is not older than in 1910. It seems that it was first practised in Lagos and Abeokuta.

This method consists of painting a pattern in starch on cloth. The starch acts as a resist to the dye, and if after dyeing the cloth is washed, the pattern again appears in white on an almost black background. The starch used for painting these patterns is cassava flour and it can be obtained in the market under the name of “lafun”.

The “lafun” must be boiled together with alum to make a thick pudding. If no alum were added, the starch would dissolve in the indigo vat. The boiled starch is now called “eko” and will be wrapped in “Ketemfe” leaves. In this way, it will keep fresh for a couple of weeks, provided that the leaves are occasionally renewed. Before applying the “eko” to it the cloth must not be washed. The design is always drawn on the starchy side. To paint the pattern on cloth, a stencil may be used. Zinc or lead sheets are normal for this.

One of the most famous stencil patterns is the coronation “adire”, of which there are many versions.

The drawing of the design is a far more laborious process when no stencil is used. The result, however, can be more alive and more attractive. Usually, a woman employs several children who help her in drawing the design. They are trained in this way to become “aladire”.

Each “adire eleko” has a special name, and each design on it also has a name. It is interesting to discover, that what seems to the stranger’s eye to be an abstract pattern, is a representative drawing.

Two of the most attractive “adire” are “eiyepe” and ” ibadandun”. “Eiyepe”  means ”all birds are here”. The various patterns on this cloth are called as follows.

Here are the names of the pattern. Topline, left to right:

The four patterns are then repeated on the right half of the cloth. Second-line left to right:

The four patterns are then side of the cloth. Third line, left to right:

The fourth line left to right:

The fifth line, left to right:

The bottom line left to right:

All patterns are repeated

“Ibadandun”, which can be roughly translated as ” we enjoy Ibadan” is an even more complex “adire”. Each line has got four distinct patterns, which are then repeated again on the second half of the cloth.

Here are the names of the pattern (topline, left to right):

The four patterns are then repeated on the right half of the cloth (second-line left to right):

The four patterns are then side of the cloth (third line, left to right):

The fourth line left to right:

The fifth line, left to right:

The bottom line left to right:

From Wenger and Beier’s article on adire making they highlight that every activity in Yoruba life has a basic religious significance.

Indigo dyeing is closely linked with the worship of a goddess called “Iya Mapo.”

“Iya Mapo” is an important Orisha, “who protects all exclusively female trades” like dyeing, pottery, oil pressing, soap making etc. She is also the deity of the female sex.

Every fourth day is her “ose” or day of worship, which happens to coincide with “jakuta”, The day sacred to Sango. On this day women will bring her sacrifices of “ekuru” made of beans, “adun” (made of maize) and groundnuts.

Every fourth “ose”, however, the “alaro” will stop all work on the dyeing pots and spend the day celebrating and worshipping “iya Mapo”. Then they will dance in the shrine and sing the praise songs (Oriki) of the goddess:

Take part in sharing your pictures and memories from Nigerian Independence – use the #60sat60 tag online.

Join us and Oluseyi Awolesi in conversation with historians Amanda Kirby Okoye and Emeka Keazor, poet Yomi Sode, and ASIRI Magazine, every Wednesday in September and early October from 6pm.

Oluseyi Awolesi has written this piece inspired by photographs from the Nancy Stanfield collection, and his experiences as a child in a school in Lagos.

Yomi Sode, Nigerian British writer, performer and facilitator, has written this poem in response to a photograph from the Nancy Stanfield collection.

Nigeria60: Then and Now

This year on 1 October it will be 60 years since Nigeria gained independence from Britain, opening up a new future.

Nigeria60: Realisation of a 99-year dream

In this written piece, Historian Emeka Keazor details prominent moments in Nigeria’s journey to independence from 1861 to 1960.

1 October 2020 marks 60 years since Nigeria became independent. Nigeria60 brings together prominent Nigerian thinkers and creatives to respond to this moment, and talk about the way in which it is imprinted in the present.
Find out more