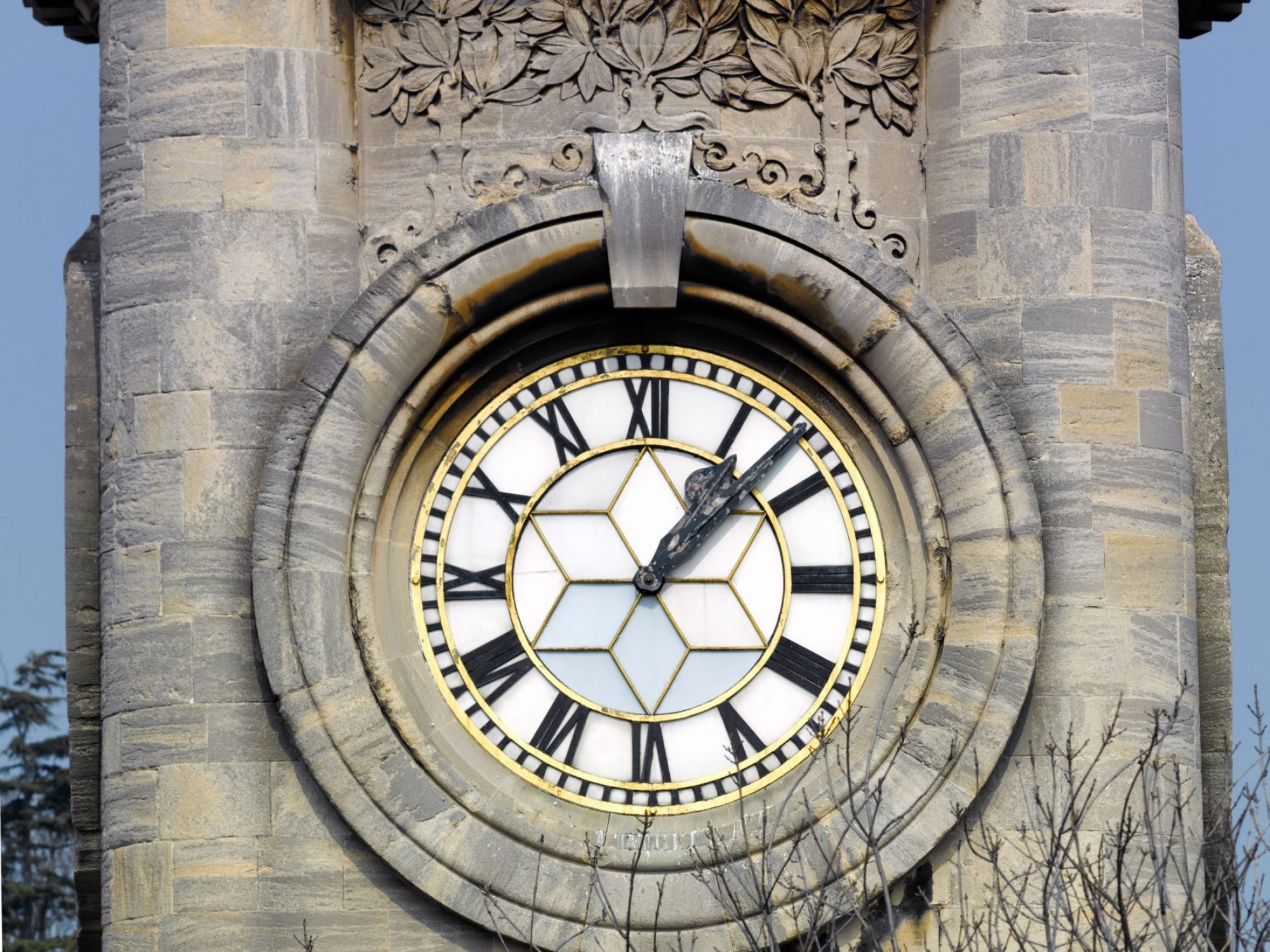 History
What does our Clocktower tell us about timekeeping?

It is easy to take time for granted in modern Britain. Lots of us have watches or smartphones that tell the time, not just locally but internationally. Time is always with us now.

But go back a couple of hundred years, and it becomes harder to know just what time it is. You could call the speaking clock to get an accurate time from the 1930s. Invaluable when resetting all the clocks after a power cut in the 1980s.

Clocks and watches had to be wound by hand before battery power became common. If you had forgotten to wind your watch, you needed to find the right time before you could correct it. While Bill and Ted may have had a time machine, Ted forgetting to wind his watch and almost cost them their history report.

So, how could you make sure you had the right time when you needed it, before the speaking clock?

Some of the oldest public timekeepers didn’t even feature clocks. But this wasn’t surprising during a period when the sun measured the hours. Because of this, time was different from town to town, city to city. You can still find sundials on old churches and buildings, which illustrates this. 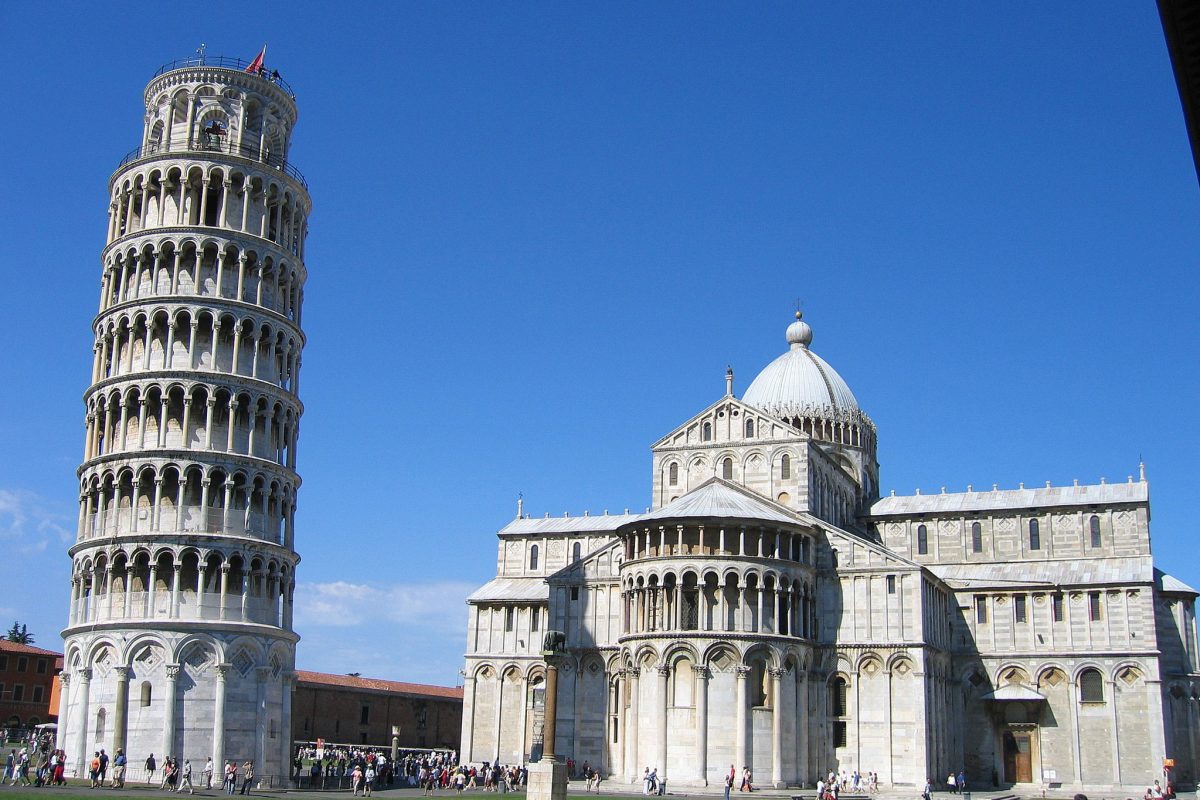 The campanile at Pisa, Johann H. Addicks CC BY SA 3.0 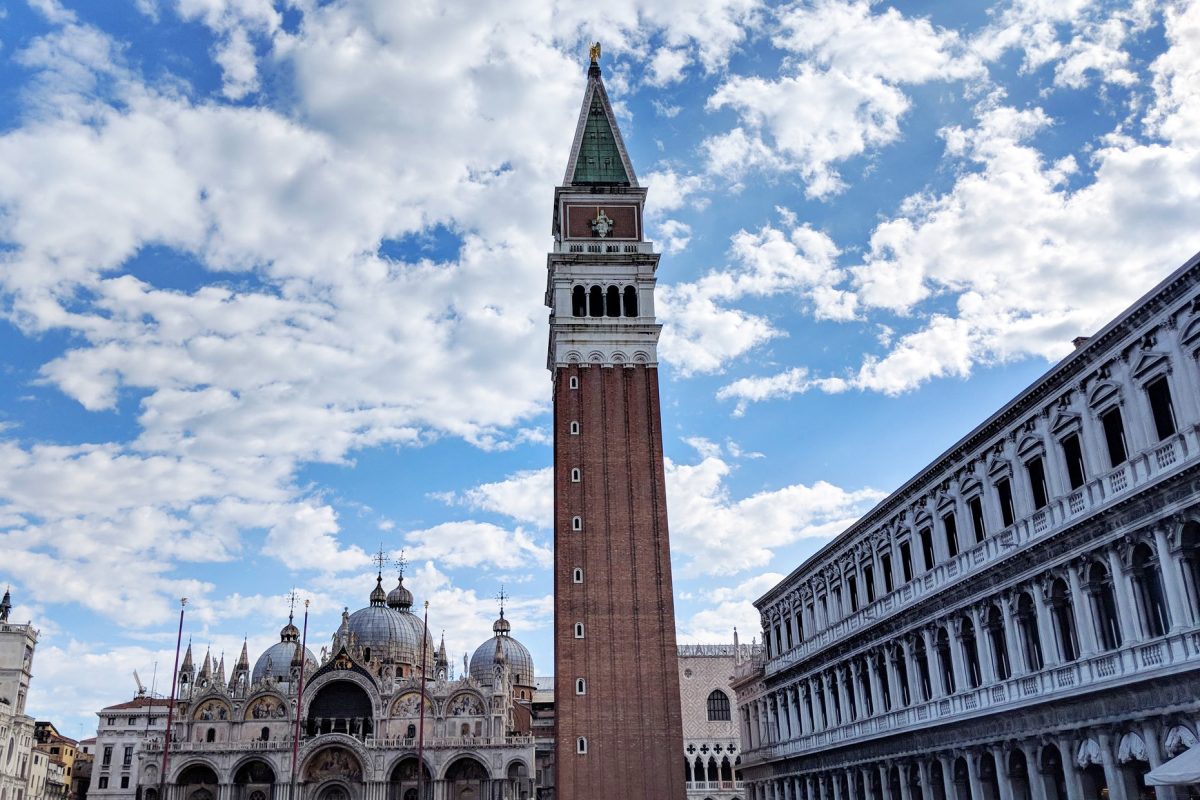 The bell tower in St Mark's Square is one of the most photographed sights in Venice, C Churcher 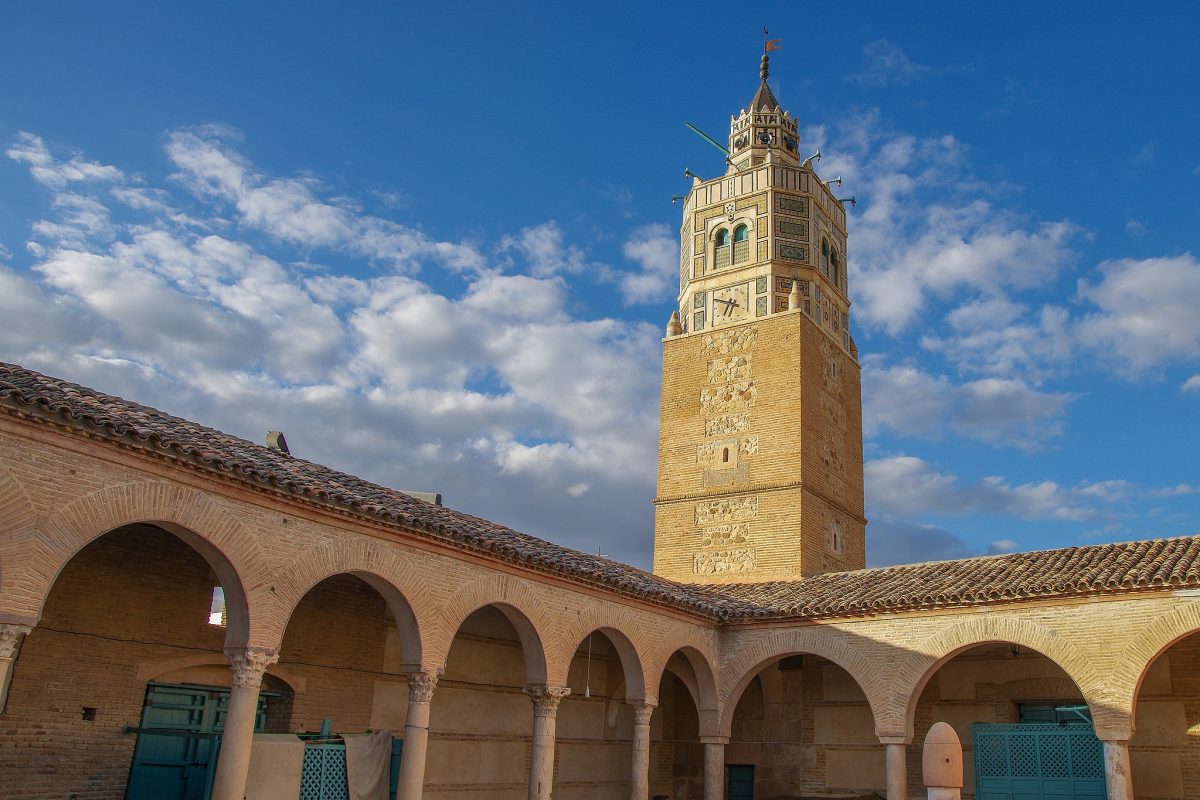 The minaret at the Grand Mosque of Testour, El Golli Mohamed CC BY SA 4.0

Campaniles first appeared in Europe from the 5th century onward, and used bells to mark time to the rest of the town or city. Bell towers really took off in the 10th century onward. Famous examples of bell towers include the leaning tower of Pisa and the tower in St Mark’s Square, Venice.

Minarets served a similar audible function from the 9th century onward, calling people to prayers, and providing a strong visual marker for a place of worship.

Towers like these worked well enough for most people in the UK, until the huge population boom and technological leap forward of the Victorian era. 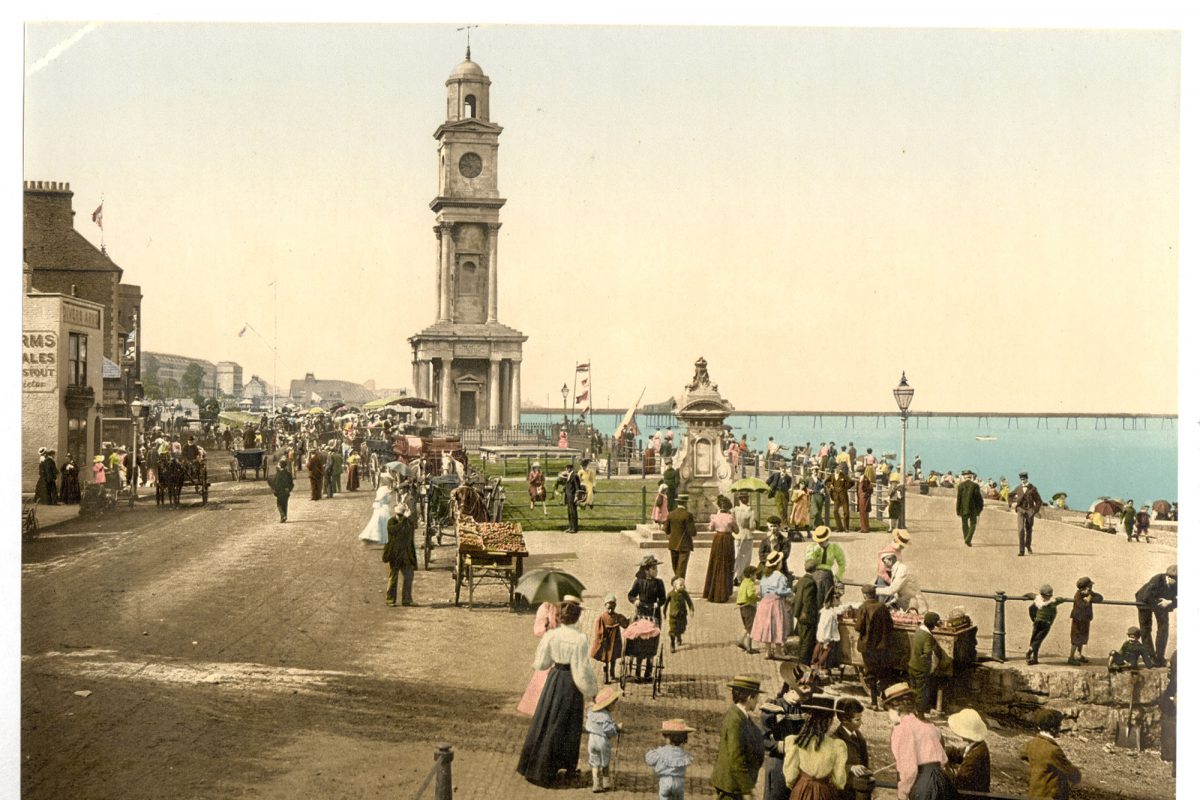 It was during this period that these monuments of time started appearing in town centres and cities.

One of the earliest purpose-built, free standing clock towers in the UK is believed to be in Herne Bay (built in 1837). Perhaps the UK’s most famous is the Elizabeth Tower, where Big Ben is housed. The tallest is The Joseph Chamberlain Memorial Clock Tower or ‘Old Joe’ at the University of Birmingham.

The Victoria population growth is almost hard to imagine now. The populace of England and Wales doubled in only 50 years.

This boom, combined with the expansion of the railways and expanding industrialism, meant that accurate timekeeping was increasingly important. It was essential to managing complex industrial networks – like trains – as well as a much larger working population.

This isn’t to say that the time was not important before the Victorian period. Time still ruled the classroom, and was a factor in the postal service and leisure activities, like sporting events and entertainment.

So how would this work, when many working people would not have access to portable time? For those who could afford a watch, you would need access to the time to check you weren’t running slow, or to aid you in winding it up.

Watches were expensive for poorer workers and labourers.

Those working in white-collar jobs, like banking, were also subject to close regulation related to time, and this regulation was passed on to their customers too. You can still see these large clocks in older banks.

Thus the clerks, most particularly those at a junior level, were subject to a degree of time discipline. By restricting access to its various services to particular times, the Bank also imposed its time discipline on its customers and the investing public who went there to buy, sell and transfer shares or government securities and to collect their dividends.

Symbolic of this were the large clocks which dominated the banking hall...
Anne L Murphy, Past & Present, Volume 236, Issue 1, August 2017

You could pay for someone to come and knock on your door to wake you up, and this was quite a widespread profession which was open to both men and women.

One “civil but illiterate” man, made an average of 28 shillings a week from over 80 regular customers as a knocker upper. 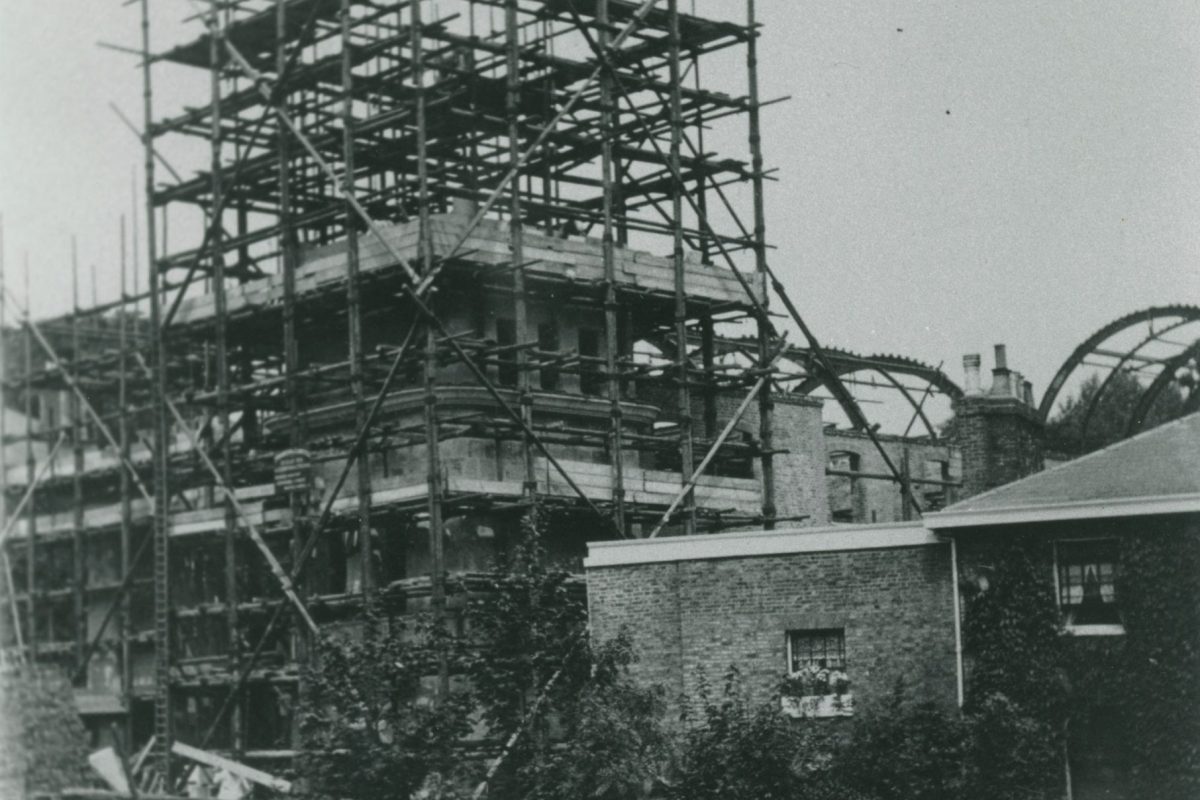 The Horniman Clocktower under construction 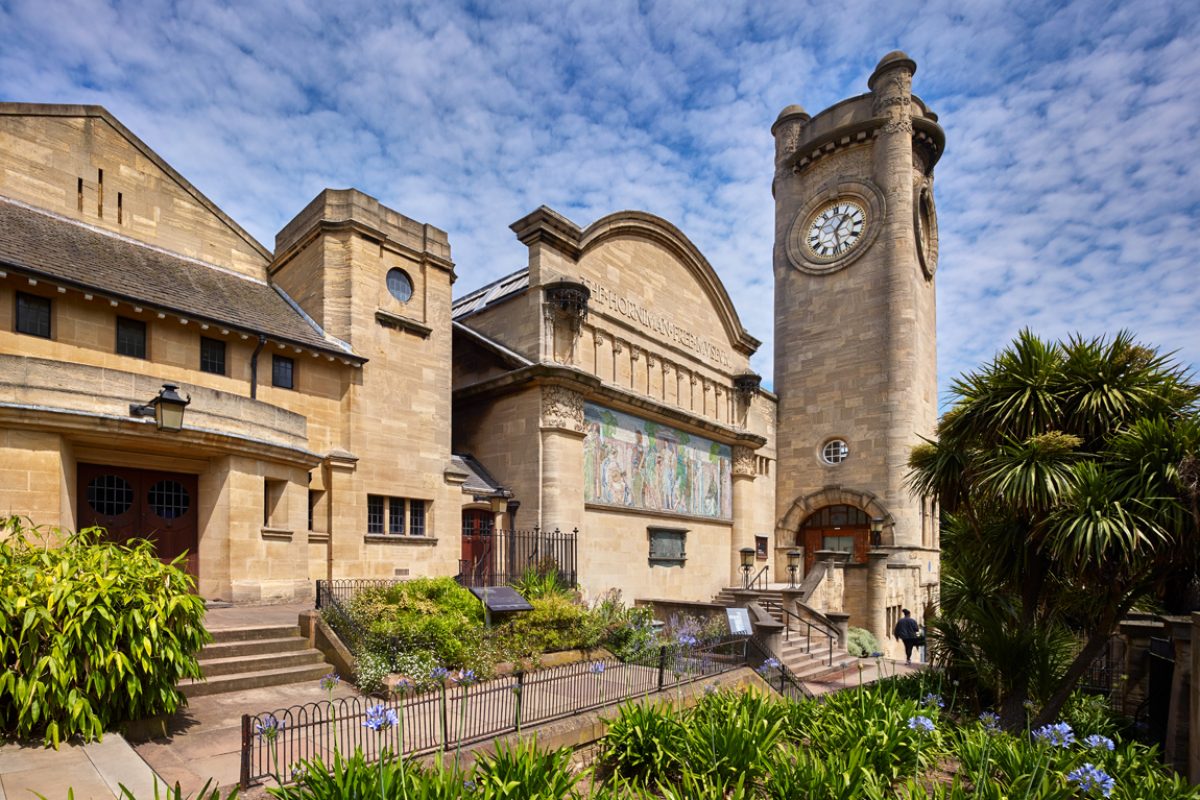 This mass erection of these clocks allowed for a democratising of time.

Public clocks could help employees get to their jobs on time, just as how bells or sundials on churches helped call to services. The combined bell and clock towers, which are heard at a distance when you cannot see (or read) the clock face, are doubly effective.

It isn’t surprising that Frederick Horniman and/or Charles Harrison Townsend included a Clocktower in their plans. The Arts and Crafts movement rated craftsmanship and the natural world over industrialisation. If the tree of life which adorns our buildings signifies that the knowledge within is for all, then a public clock gives you knowledge that you don’t need to take a step inside the door for. 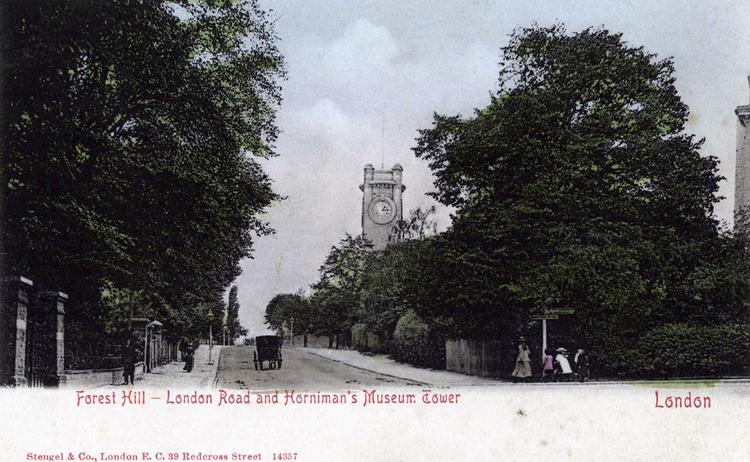 To give an idea of scale for clock towers, Historic England lists 3,675 across England, with 264 in London alone. Local authorities and public donations paid for others, while some were created to mark key dates. This mixture of philanthropy and commercialism has resulted in lots of different styles.

Clock towers were also great advertising, and some were sponsored by businesses, which also helped to inform their placement. If you placed a modestly tall clock tower at the centre of a town, market or busy road intersection, you could reach a great number of people.

Clock tower building slowed down in the twentieth century. Watches became more affordable, and smaller wristwatches became fashionable. It is not uncommon to see public clocks now telling the wrong time, as those who serviced them have moved on with tighter budgets, and less need. 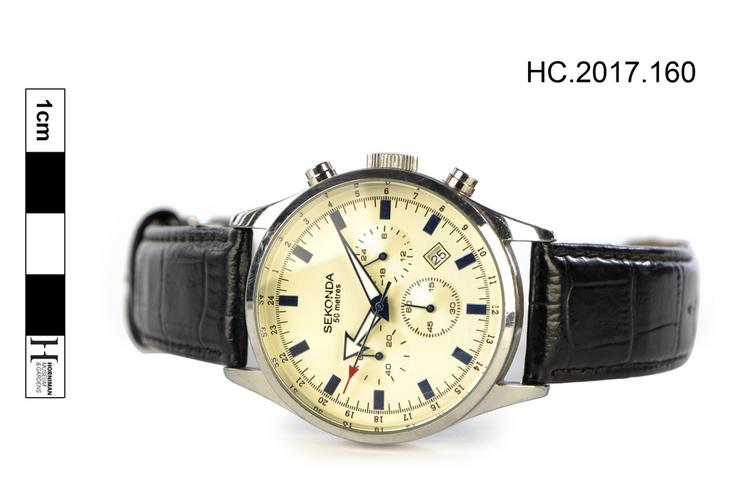 Despite this, public clocks still loom large in our consciousness.

Public clocks are landmarks of our communities. We meet people beneath them at stations, they sound at the start of the news and commemorate our remembrance days. Tourists flock to the most famous of them, and they are some of the most photographed structures of our cities.

Our Clocktower is a big part of how people recognise the Horniman. Our founder, Frederick Horniman, even had his office in the square tower (look out for the small, round windows).

Can you imagine the top of the hill without our tower? We think not. 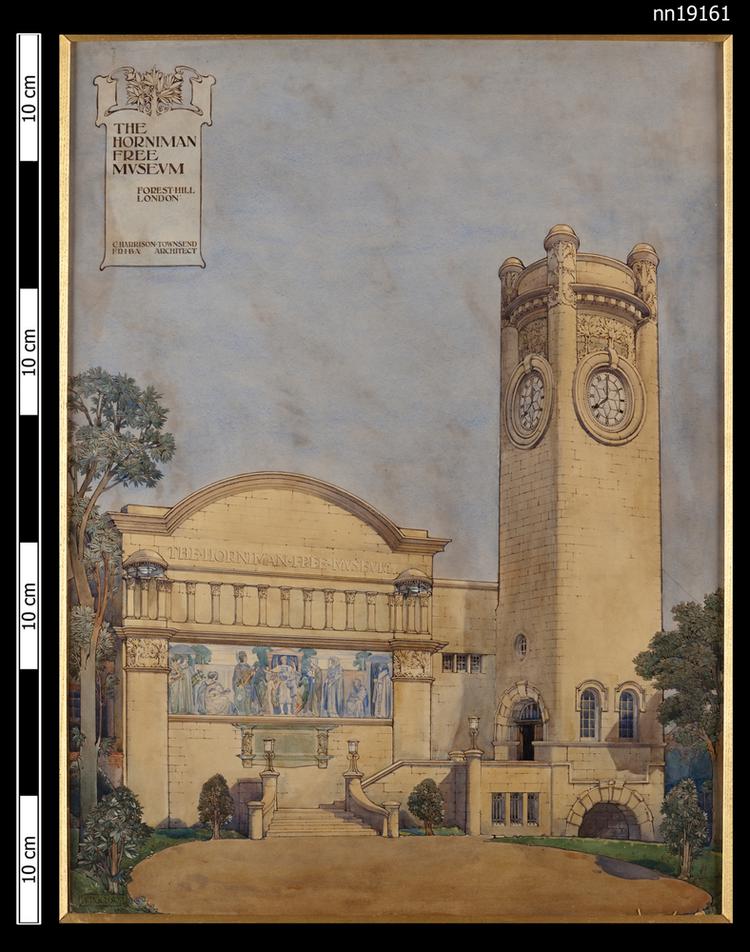 Painting of the Horniman Museum, showing the front and clocktower. It is housed in a glazed wooden frame, with metal clips at the back. There is an inscription in the top left corner, reading 'THE / HORNIMAN / FREE / MUSEUM / FOREST.HILL / LONDON. / C.HARRISON.TOWNSEND / F.R.I.B.A. ARCHITECT'.
See full collection record

The Tree of Life

The Tree of Life, or world tree, pops up all over the place – from myths and religious parables to philosophy and artwork. You can find the tree of life all over the Horniman’s architecture, designed by Charles Harrison Townsend.

We took a look at the life and work of the architect behind the Horniman's unique style, Charles Harrison Townsend, who created our landmark buildings.
Walk