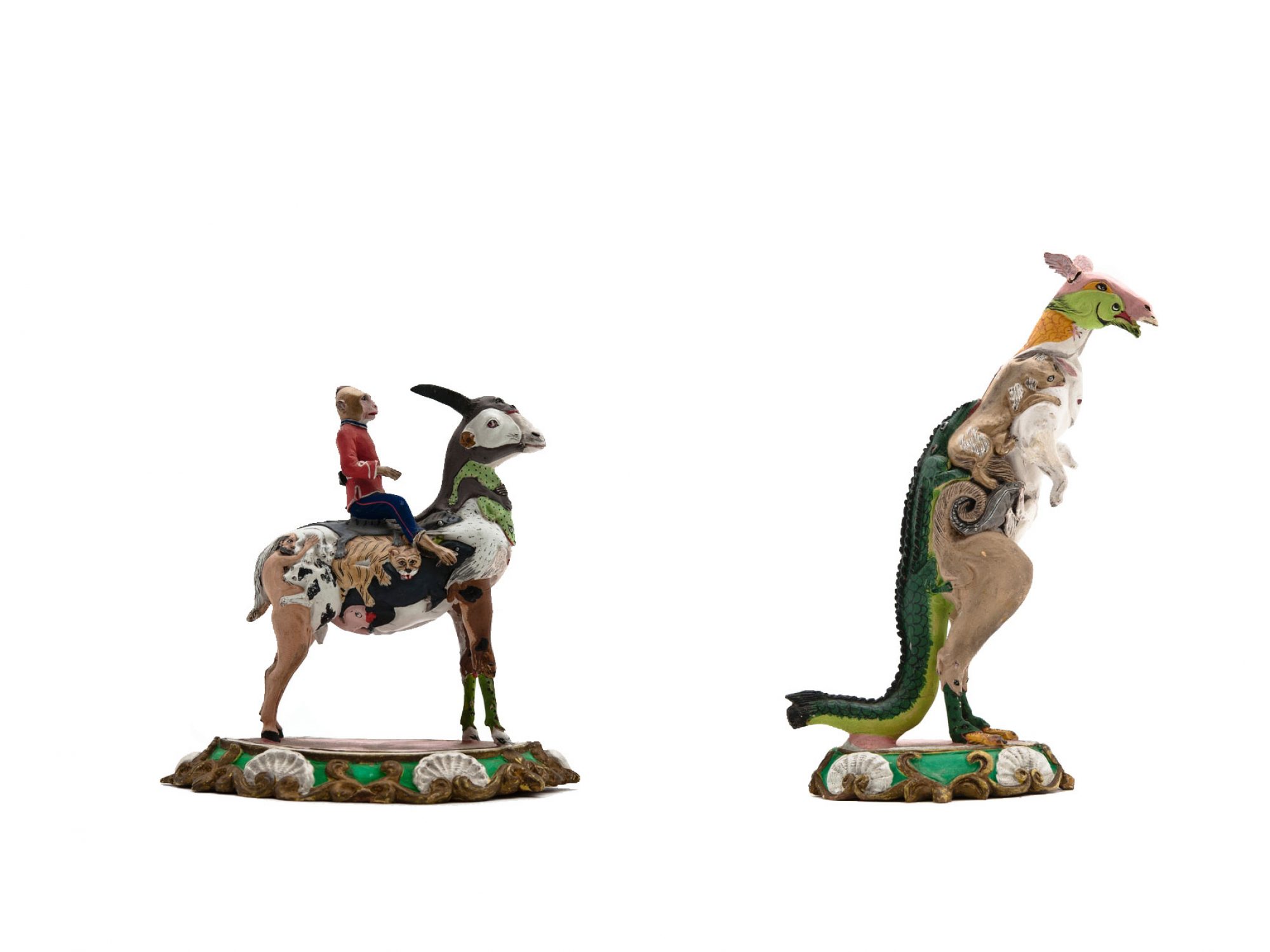 Anthropology Mystery Research
There are 14 extraordinary painted clay zoomorphic figures in the Horniman collections which have piqued the curiosity of visitors. Curatorial volunteer Alison South has been researching these figures to find out something about their origins.

These are 3D artworks, with animals and humans comprised of numerous smaller animals. The fine quality of the figures and their unusual form has been a source of interest, particularly since four of the figures have been put on display in the World Gallery, while two more featured in the recent Lore of the Land exhibition.

The creatures depicted are so diverse there is no obvious link to any particular geographical region. Painted clay zoomorphic figure of a donkey, ridden by an owl dressed in a green hat and coat. The donkey is composed of many different interlocking animals. The figure stands on an ornate pink and green oval base, with gold scrollwork and silver fans around the edge.
See full collection record

The 14 models consist of the following 21 figures:

Whilst paintings of zoomorphic creatures are well-known in Indian art, we have not so far been able to trace any other similar ceramic figures. 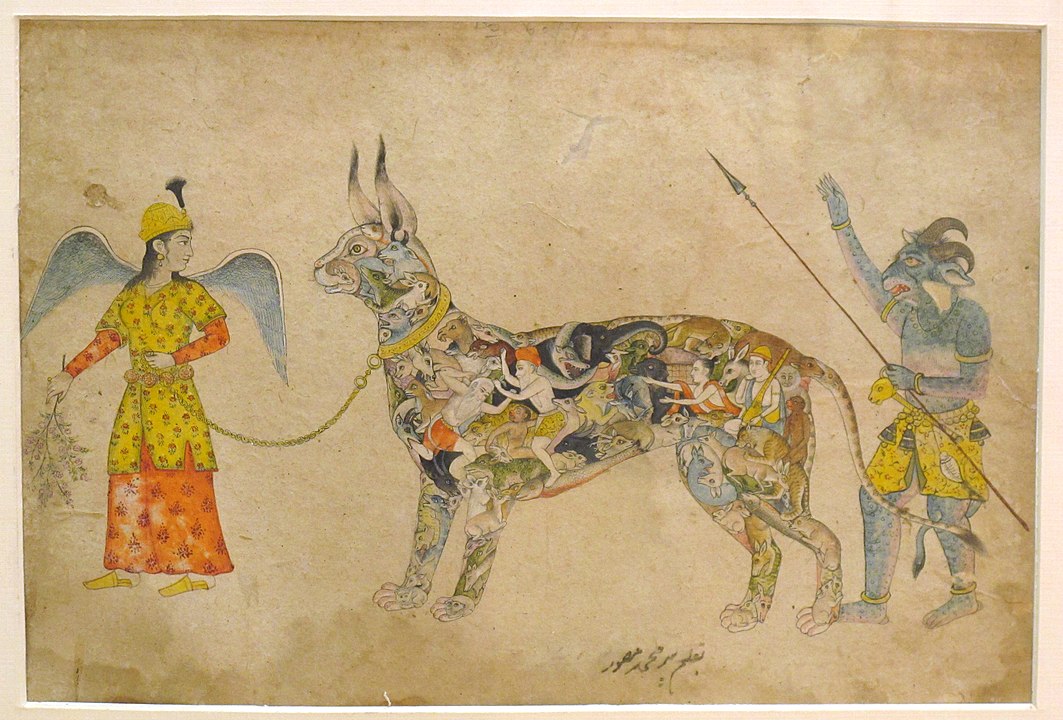 How did the Horniman acquire them?

As with most of our research projects, we began with our own records: the Horniman’s historical file relating to the transfer from the Wellcome in 1982. Painted clay zoomorphic figure of a cow and calf, both composed of many different interlocking animals. The figures stand on an ornate pink and green oval base, with gold scrollwork and silver fans around the edge.
See full collection record

The file also includes copies of the Wellcome’s descriptions and index cards, which pointed us to two sources.

Although the objects came to the Wellcome from two separate sources, they are so similar that they are considered to have come from the same origin. The figures currently on display at the Horniman all come from the Easton Park source, the remaining figures are in store at our Study Collections Centre. Painted clay zoomorphic figure of a gazelle, composed of many different interlocking animals. The figure stands on an ornate pink and green oval base, with gold scrollwork and silver fans around the edge. The horns are broken, and one is detached.
See full collection record

The next step was to identify Easton Park. Online searches brought us to Easton in Suffolk and their excellent local history website revealed that the Easton Park estate formed part of the Dukes of Hamilton’s holdings. The Hamilton’s were (and are) the most senior peers in Scotland, and Easton was the main base of the 12th Duke of Hamilton.

It was well established that the whole estate, 4,833 acres, was put up for sale in 1919 and a large proportion of the estate was sold at that time. However, no sale of artefacts taking place in June 1919 (as referred to in the Wellcome documentation) was known about locally.

Local historian Mr Brian Boon suggested contacting Dr Godfrey Evans, Principal Curator of European Decorative Arts at the National Museums Scotland, as a researcher of the Dukes of Hamilton, and the Hamilton Palace collection and dispersal. We’re very much indebted to both these individuals for sharing their knowledge on this with us.

Following our enquiry, the archivists in the Wellcome Library helpfully located an uncatalogued sale catalogue in their archives for an auction by Moore Garrard & Son for five days at Easton Park starting on 25 June 1919. 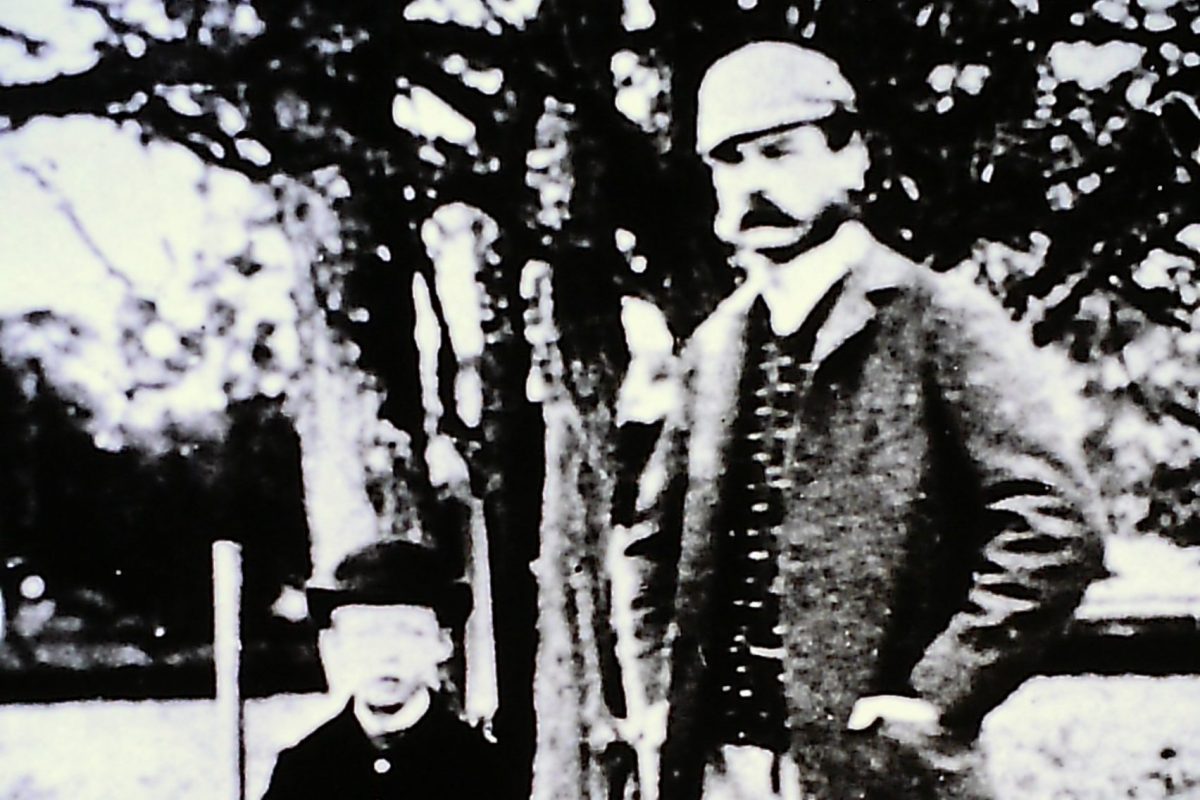 The 12th Duke with a gun boy, Courtesy of Mr Brian Boon 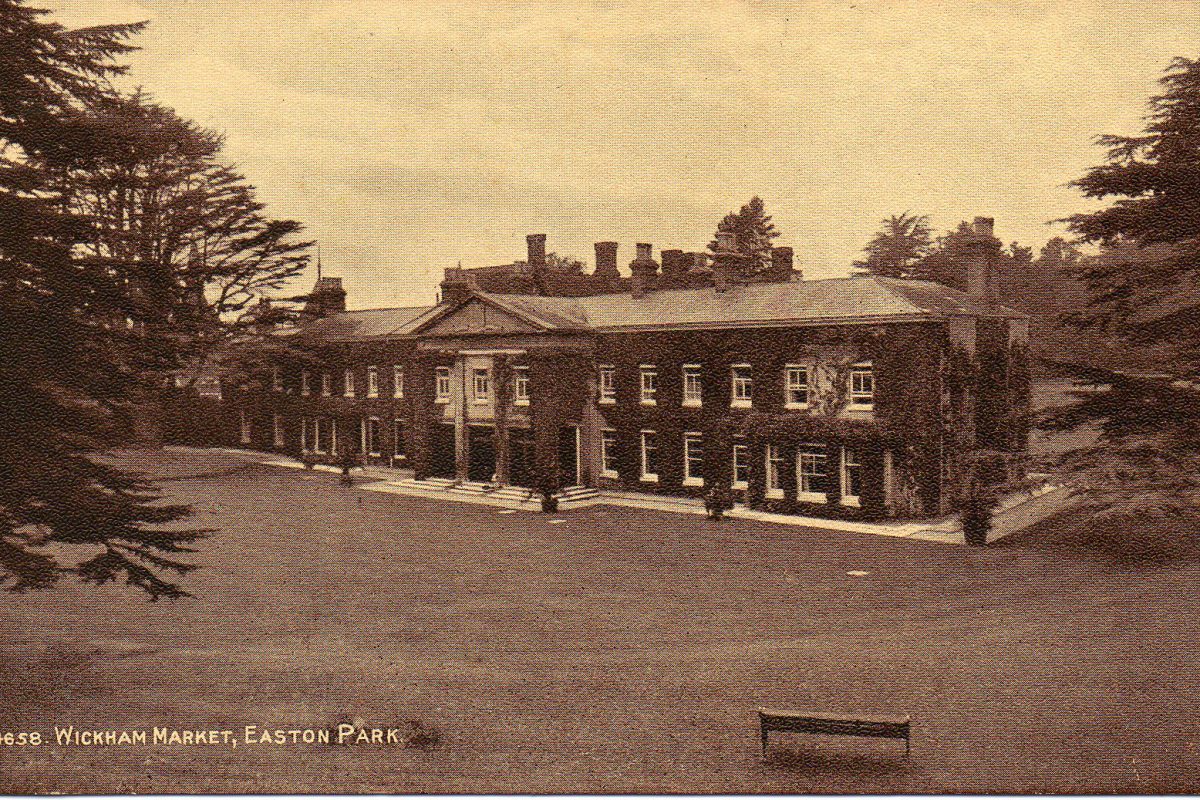 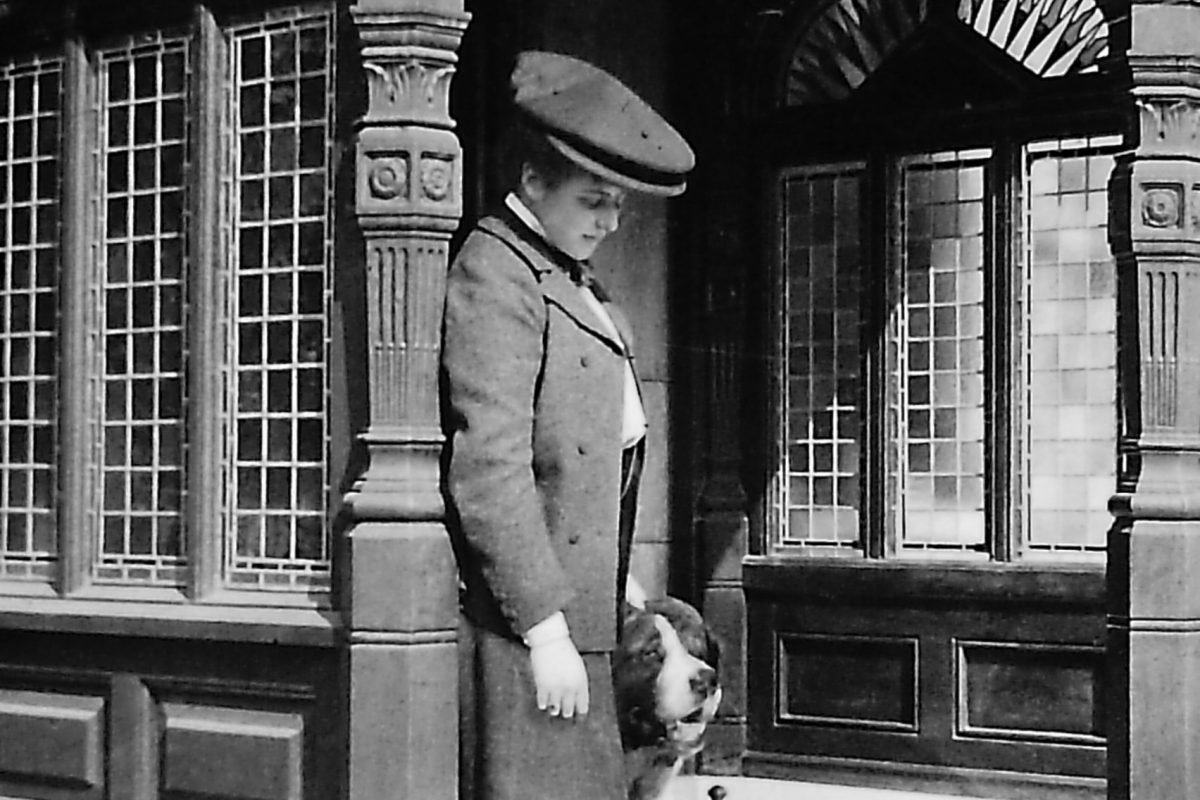 Almost simultaneously, Dr Evans confirmed that this was the sale at which the 12th Duke of Hamilton’s collections were disposed of by the Marchioness of Graham, his daughter and only child. The 12th Duke had died some years previously, aged 50 in 1895.

Lot 243 from the first day of the sale is described as ‘Eleven quaint Russian figures and animals, under glass.’

The annotated copy of the sale catalogue confirms that Lot 243 was purchased by ‘Stow’ for £9, 15sh. Dr Ruth Horry at the Wellcome Collection explained Mr Harry Stow was one of the longest-serving of the Wellcome’s employees and acted as a regular purchasing agent at auctions and sales.

The Wellcome index card for the Easton Park acquisition indicates there were 12 figures rather than 11 and that the origin was thought to be Indian rather than Russian. The glass coverings referred to in the sale catalogue have not survived.

So how did William, 12th Duke of Hamilton come into possession of these 12 exquisite figures? This is where the trail goes cold.

They may have come to him directly from India or from some more circuitous route. He is not thought to have visited India himself though family members and friends may well have. The figures could possibly have been a gift from someone who knew of his interest in amusing, bizarre and exotic representations of animals of which there are many examples within his collections.

The next task was to investigate Mr Maggs of Covent Garden. The Wellcome has now digitised their correspondence files so it’s possible to read the exchanges from 1937.

When offering the two figures to the Wellcome, Mr Maggs said, “I feel sure” that the figures were made in Lucknow for the Nawab (or ruler) of Oudh (the anglicised spelling of Awadh) and were in his collection about 100 years ago.

He added that the king was a great lover of wild animals and had a “wonderful collection.” After some correspondence, the price of 8 Guineas was agreed for the purchase.

So, who was Mr Maggs? 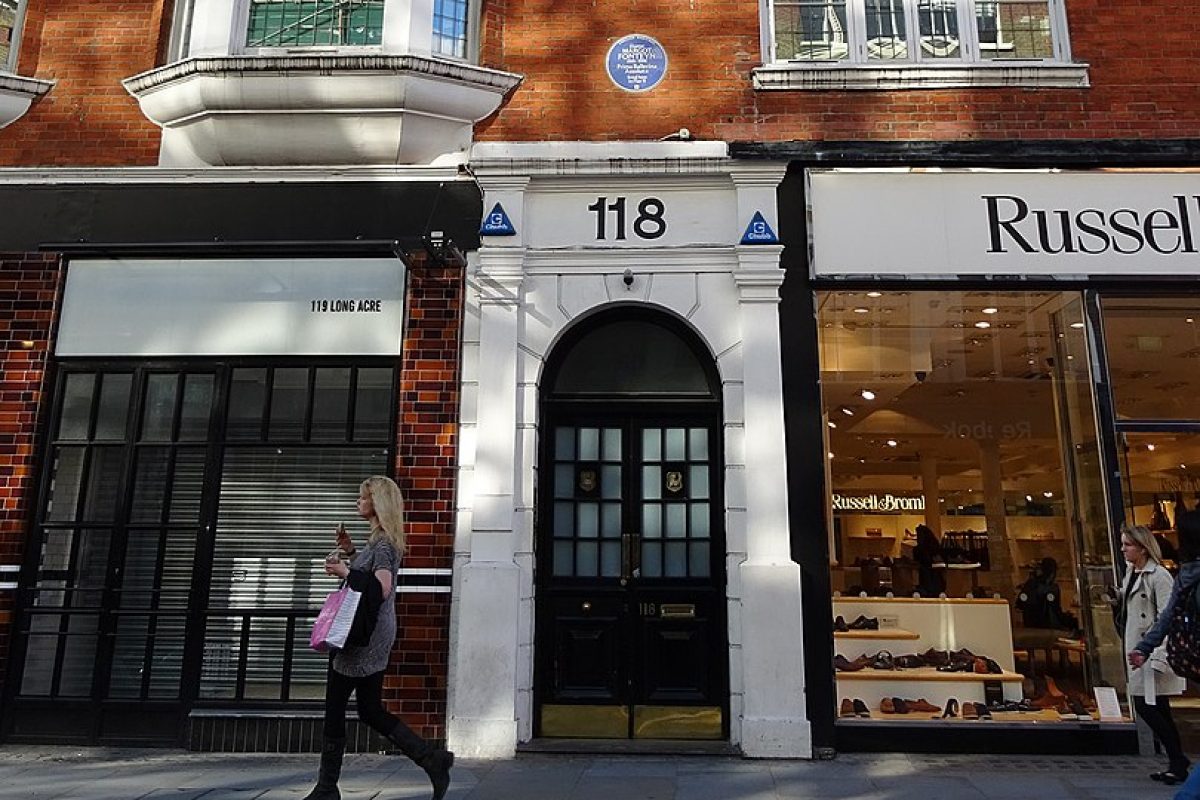 Harry Reginald Maggs is listed at the Long Acre address between 1935 and 1939 on the Electoral Register, as is Sarah Lewis Maggs. They are also linked to a property at 50 Great Russell Street, which is probably a business address, located opposite the British Museum.

By 1939, the flat at 118 Long Acre was vacant, and the census confirms Harry and Sarah Maggs were living in Hove. Harry’s occupation is given as General Export Agent and his date of birth as 8 June 1880. Sarah, born on 17 September 1888, was a Master Antique Dealer.

No details of Sarah’s business activities are known at present, but it’s interesting that she dealt in antiques, which adds to the validity of the explanation of the origin of the figures mentioned in Harry’s letter to the Wellcome. From the Wellcome correspondence files, we know that in 1936 Harry also offered them sets of drug jars and glass bottles from a chemist’s shop which he said were 150 years old, though these were not purchased by the Wellcome. He does not appear to have offered or sold any other objects to the Wellcome, apart from the 2 figures.

We have not been able to find any evidence so far that Harry was involved in trade with India, though this is a possibility, or that the figures were acquired through Sarah’s business dealings.

The King of Awadh Connection

Based on the information in Harry Maggs’ letter, the figurines date from around 1837 and were made in Lucknow for the Nawab of Awadh. There are four rulers of Awadh who ruled within the likely time-frame: 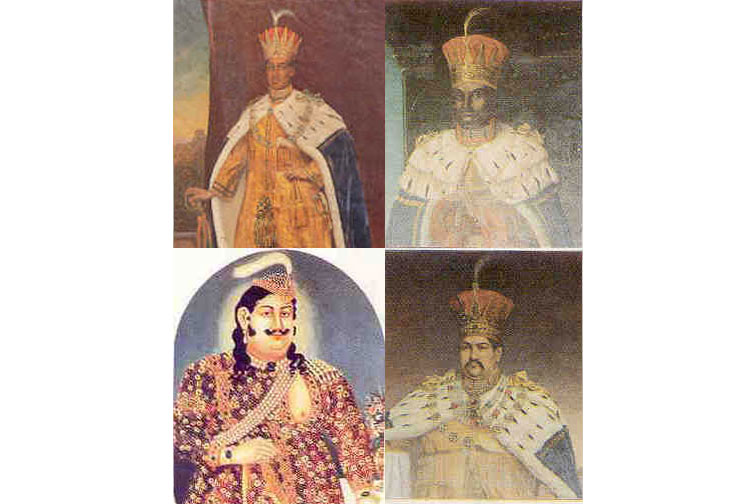 King Wajid Ali Shah was the last Nawab of Awadh and a great patron of the arts. He also possessed a large menagerie of animals.

In 1856, his kingdom was annexed by the British and Nawab Wajid Ali Shah eventually settled in Metiabruz, a suburb of Calcutta, following stints under house arrest. His mother and brother came to England in 1856 to plead his case with Queen Victoria. The first great revolt of Indian Independence started in Awadh in 1857 and Lucknow was besieged.

Accordingly, there would seem to be very many routes by which these figurines could have come from Awadh to England – either during or following the annexation by the British.

Can you shed any light on these figures, or have you seen others like them?

Get in touch and tell us. Painted clay zoomorphic figure of a kangaroo, composed of many different interlocking animals. The figure stands on an ornate pink and green oval base, with gold scrollwork and silver fans around the edge.
See full collection record

We hear about how important access to collections is from a researcher Ashiyanbi, Akeem Abiodun, who is undertaking a PhD in African Visual Arts at the Institute of African Studies, University Of Ibadan, Nigeria.
About the Horniman