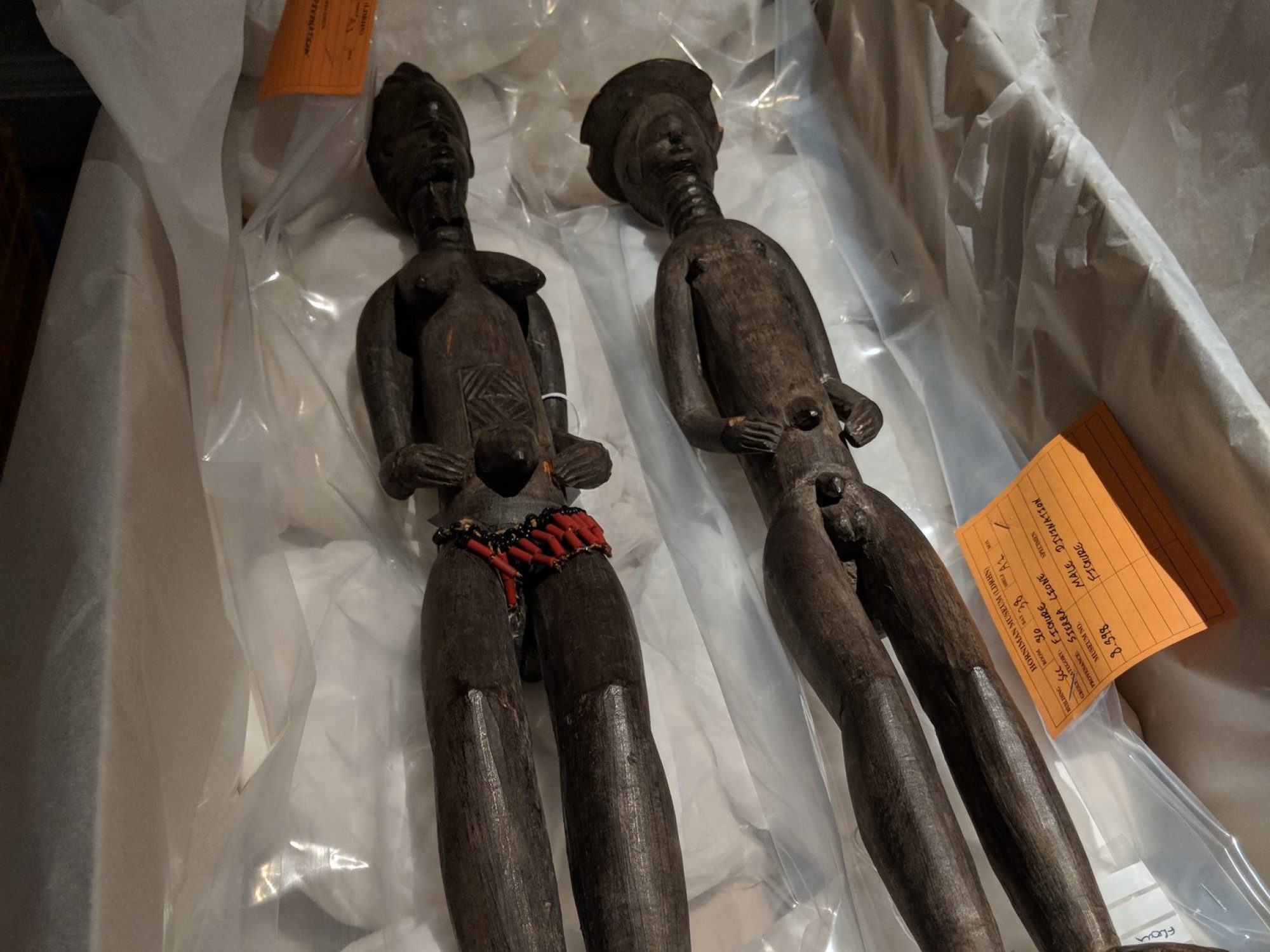 Anthropology Research
Zachary Kingdon, Curator of African Collections at World Museums Liverpool, describes an important object in our Anthropology collections and shares his research on its vendor, C. D. Hotobah During.

Zachary Kingdon, Curator of African Collections at World Museums Liverpool, has been researching the African donors and vendors. Here, he describes one of the important objects in the Horniman’s Anthropology collections, sold to the Museum in 1908, and shares his research on its vendor – Claudius Dionysius Hotobah During.

The male figure, which would probably originally have been clothed in fabric, belongs to a class of broadly similar figures that were used in various contexts in Sierra Leone.

Mende medicine associations, including the women’s Sande and the Njaye association, open to both men and women, kept figures like these to guard the ‘medicines’. Association officials also displayed them during processions and used them in curing rituals.

The figure is particularly interesting because it is shown wearing a European hat, a common sign of status during the colonial period, as they were often worn by indigenous chiefs. Typically images of spirits were carved to represent high status individuals so as to gain their favour.

This figure was donated by Claudius Dionysius Hotobah During, a Krio lawyer who travelled to London in 1908.

Claudius Dionysius Hotobah During was born on 16 September 1886 in Freetown. His father was licensed money lender and businessman called George Punshon During.

He would have belonged to the population of Sierra Leone Liberated Africans or recaptives (or their descendants) who were Africans taken from slave ships in the Atlantic Ocean in a mission by the British after the latter abolished the slave trade. They were settled on the Sierra Leone peninsular from 1808 until about 1864 and they formed the dominant stream in the creation of Sierra Leonean Krio identity.

Colonisation of the Sierra Leone Peninsular began in 1787 with the British attempts to create a Christian settlement in West Africa.

Contingents of black settlers arrived to the fledgling colony from London, North America and Jamaica. But the settlers from these groups were eventually dwarfed by tens of thousands of the ‘Liberated Africans’ whose origins ranged from Senegambia to Angola. Many were sold as apprentices to the white settlers, Nova Scotian Settlers, and the Jamaican Maroons, and some were forced to join the Navy.

Some of the ‘Liberated Africans’ or recaptives who were not forced into apprenticeships or the navy, were employed on public works as carpenters and masons, while others set themselves up in business and took on ‘apprentices’ of their own. Later, especially under Governor MacCarthy (1814-1824), many others were sent to villages on the Sierra Leone Peninsular supervised by missionaries and settlers according to the parish system, where they were given a Christian education.

On being baptised many ‘Liberated Africans’ or recaptives were given the European name of their parish superintendent or chose some other European name (Fyfe, 1962: 119 & 169). George Punshon During’s fathers’ name most likely came from Henry During of Hanover, a German missionary with the Church Missionary Society, who arrived in Sierra Leone in 1816 and was sent to work as superintendent in the ‘Liberated African’ village of Gloucester (See C.M.S. Register of Missionaries (Clerical Lay & Female), and Native Clergy, from 1804 to 1904).

Claudius Dionysius Hotobah During’s mother was woman called Mami Dada who lived in the Brookfields quarter of Freetown. Although he was born out of wedlock, Claudius received a good start in life.

His father sent him to Freetown’s Methodist Boys High School where he proved an able student. At the age of nineteen, in late 1905, Claudius took up a position as a clerk in the colony audit department in Freetown (The Sierra Leone Royal Gazette p.648, December 1905).

But George Punshon wanted his son to study law in Britain and, because he was a wealthy man, he was able to pay for his son’s education.

Claudius gained a place at Middle Temple and travelled to London in early 1908. He must have travelled with a case full of ‘ethnographic’ artefacts because, on arrival in Liverpool, he made donations of African artefacts to the Liverpool Museums (now the World Museum) and in the same year he sold further Mende items to the Horniman Museum and Gardens.

While in London in 1911, before his return to Freetown, Claudius was elected both a Fellow of the Royal Geographical Society and a Member of the Royal Anthropological Institute.

This suggests that his early donations to the museum in Liverpool and his contribution to the Horniman collections may have been made within an ‘anthropological’ frame and helped in his bids to become elected to the learned societies, membership of which would have boosted his standing in Freetown society circles. In fact, his memberships were announced in The Sierra Leone Weekly News.

Once he had returned to Freetown, to practice as a barrister in September 1911, Claudius continued making donations to the Liverpool Museum through Arnold Ridyard, a Chief Engineer with Elder, Dempster & Co shipping line, every year until 1915.

At the beginning of the 20th century, African material productions were described as “primitive” in museum displays and were contrasted with the “arts” of Europe in order to construct an ideology of European civilization and to frame European societies as “evolved” and “modern”.

As a well-educated and cosmopolitan Krio law student in Britain from 1908 to 1911, Claudius Hotobah During would have been familiar with such museum displays and the ideas they were illustrating.

There is evidence that he later sought to subvert these ideas in a quite subtle way. The figure of the railway official and the copy of a European helmet that he collected and donated to the Liverpool Museums in 1913 (after his return from London) would have been considered inauthentic by most European collectors for their demonstration of European influences and African modernities.

Yet it was probably precisely these attributes that interested Claudius, and his interest in giving them to the museum in Liverpool may likewise have been for their potential to reframe Africa closer to his own experience, in a way that subverted the dominant museum-promoted ideology of the African continent as being inhabited by static, archaic and a-historical societies.

Claudius Dionysius Hotobah During died in Freetown on 26 April 1973, having pursued a legal career in Freetown as barrister and Notary Public.

Zachary Kingdon, Curator of African Collections at World Museums, was consulted as part of the Collections People Stories project as a specialist on collections from Africa.

Horniman hailed as one of the world’s coolest museums

The New York Times has named the Horniman Museum and Gardens as one of the 10 coolest museums in the world – and we are pretty excited about it.