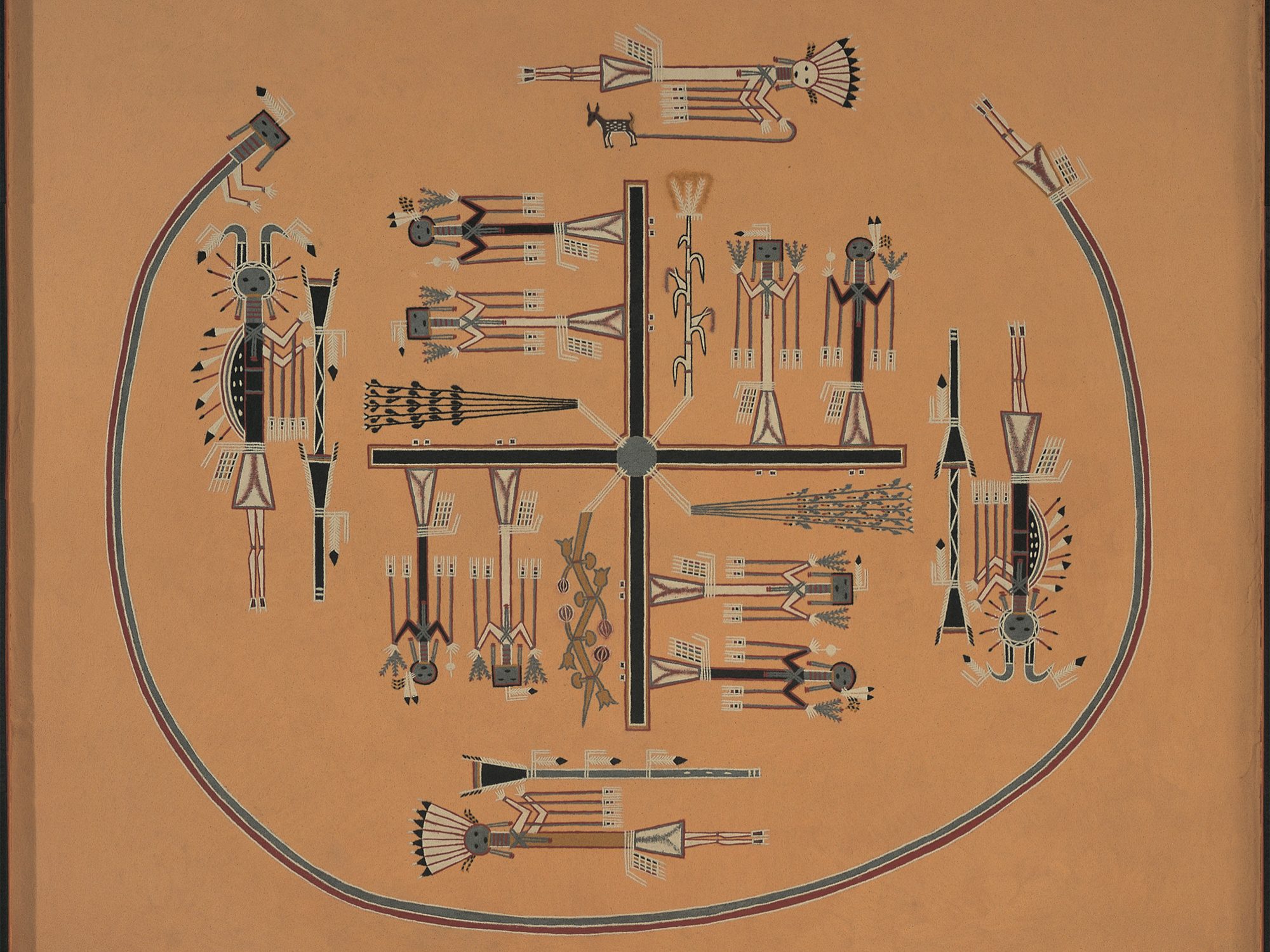 Follow this trail to discover some of the highlights of the collections on display here at the Horniman.
Sand Painting, America

Made by Fred Stevens in 1966, this incomplete design is called “Whirling Log”.

It represents a lake in the centre with logs floating to the shore, pointing north, south, east and west. Male and female deities stand on the logs, with white corn, yellow pumpkin, grey bean, and black tobacco brought as gifts.

See it at the Museum entrance. 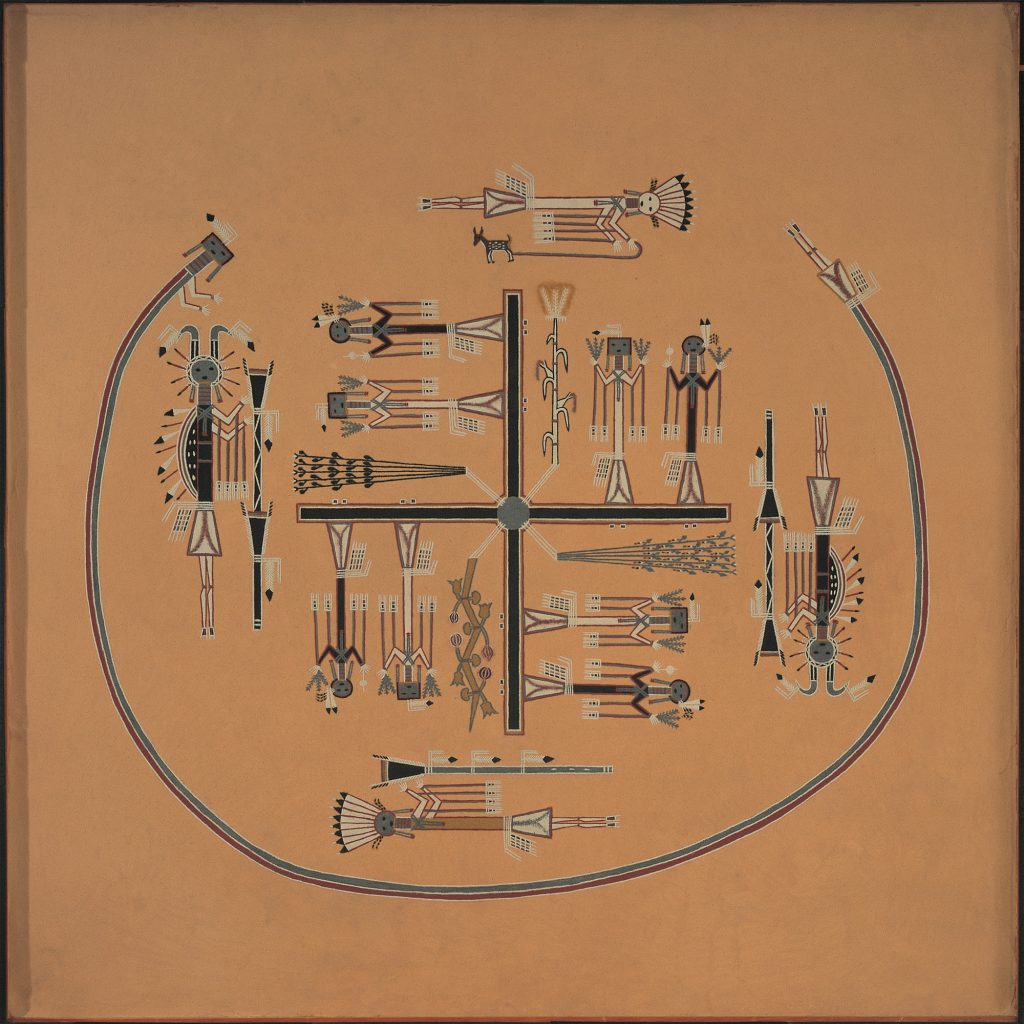 The Walrus has been on display here at the Horniman for more than a century.

Our Walrus is an unusual taxidermy specimen, it appears stretched and ‘over stuffed’ as it lacks the skin folds a walrus in the wild would have. Over 100 years ago, not many people (outside of Arctic regions) had ever seen a live walrus, so it is hardly surprising that ours does not look true to life.

See it in the Natural History Gallery. 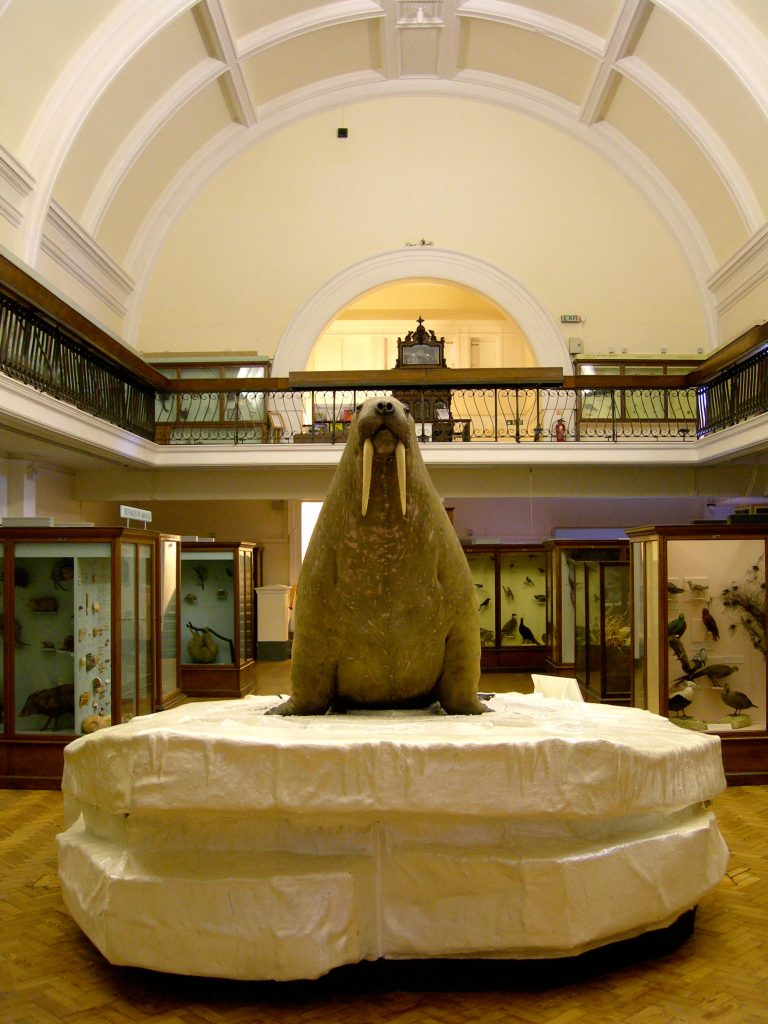 This is the earliest known example of a hoop-shaped horn made in England.

Before this time, most horns in England were short, straight instruments used in hunting. This circular design was patterned on horns played in French courts. William Bull – who made this instrument – is thought to be the earliest English maker to use the term ‘French horn’ to describe his instruments.

See it in our Music Gallery. 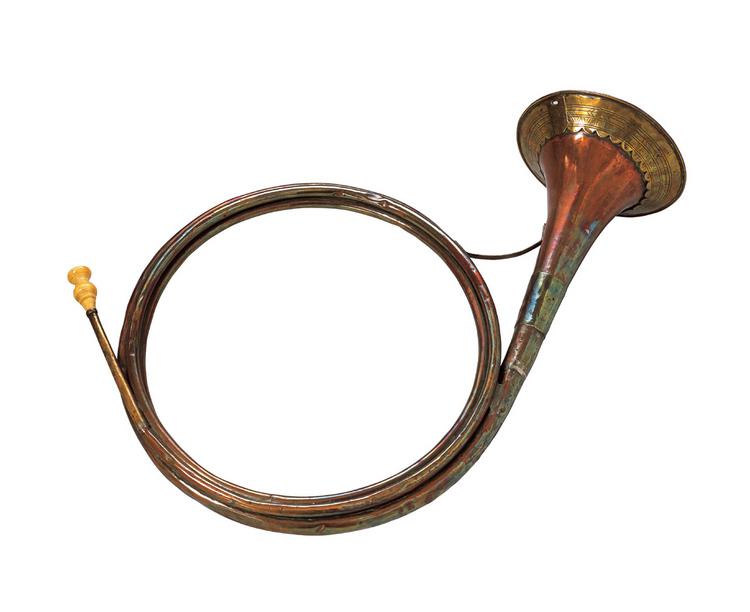 This horn from 1699 is the earliest known example of a hoop-shaped horn made in England, Heini Schneebeli

Made in 1937 and played in the 1940s and 50s by George Robertson in his band ‘The Five Aces’, the Carlton drum kit was popular with performers because of its compact design and varied components.

After the First World War, American jazz became popular in the UK. Percussion instruments made for the British jazz scene reflected those in the US, where drum kits had been used since the mid-1920s.

See it in our Music Gallery. 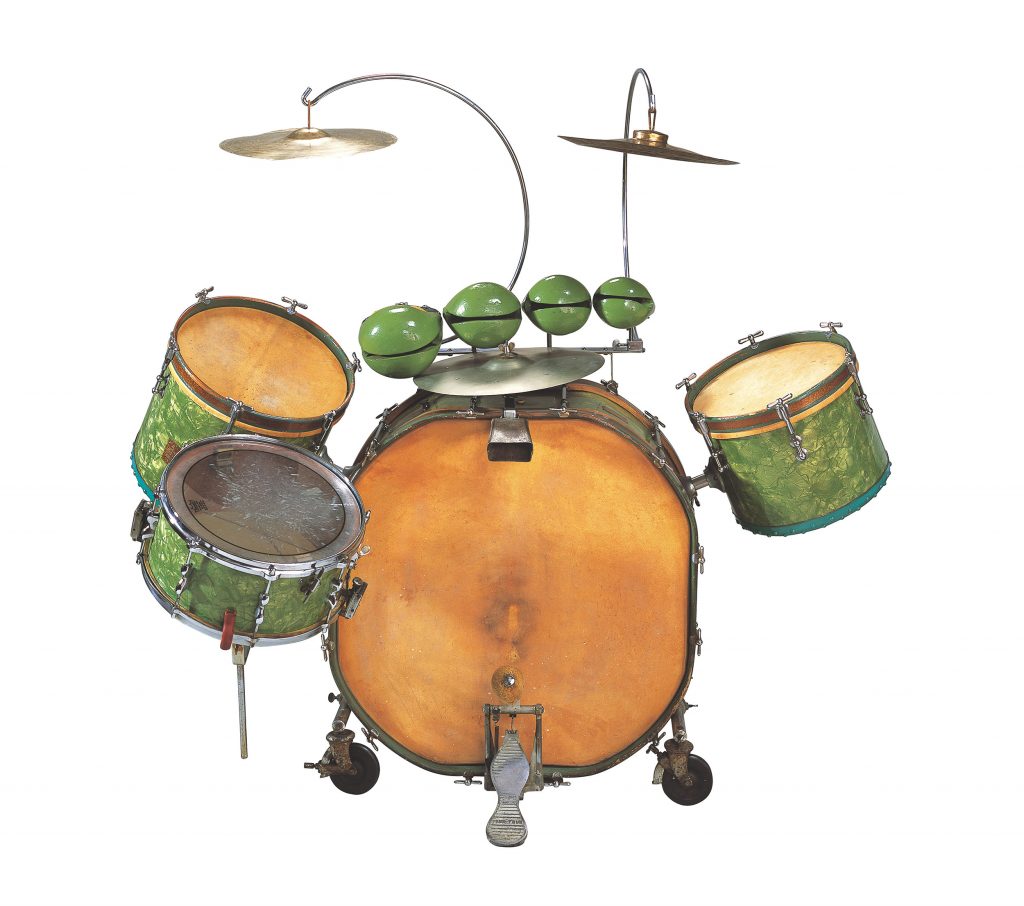 The Carlton drum kit was popular with jazz musicians

The oak tree near the Sound Garden is the oldest tree in the Gardens. It dates back to before the Horniman was established, when the land was fields.

Oaks are our most important native tree, they are often called ‘keystone’ species because it has a disproportionately large effect on its environment relative to its abundance. It is thought that one oak tree is home to 500+ species compared to the sycamore that supports just 15 or so.

See it in the Gardens. 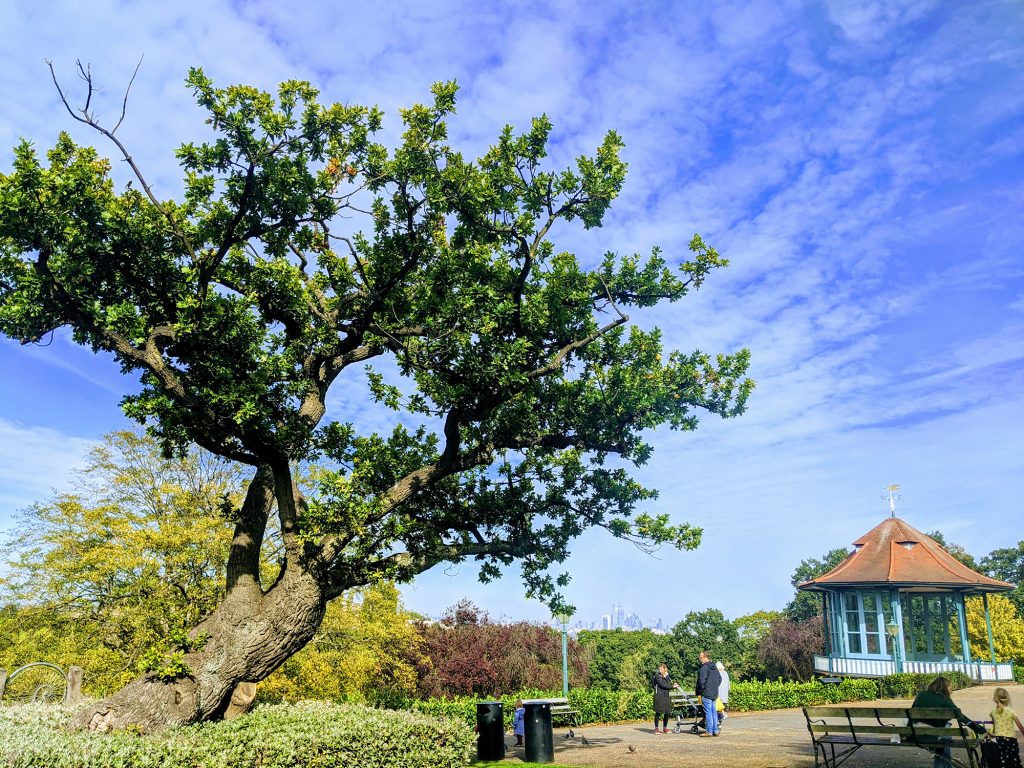 The oldest tree in our Gardens – an oak tree

This torture chair is one of Frederick Horniman’s original purchases.

Made from wrought iron, it was reputed to have been used in a dungeon in Cuenca in Spain in the 17th century.

We now know that although many components are genuine the chair was greatly added to in the 19th century to feed the Victorians’ interest in gruesome historical displays.

See it in the Horniman’s Vision area of the World Gallery, on the upstairs Balcony. 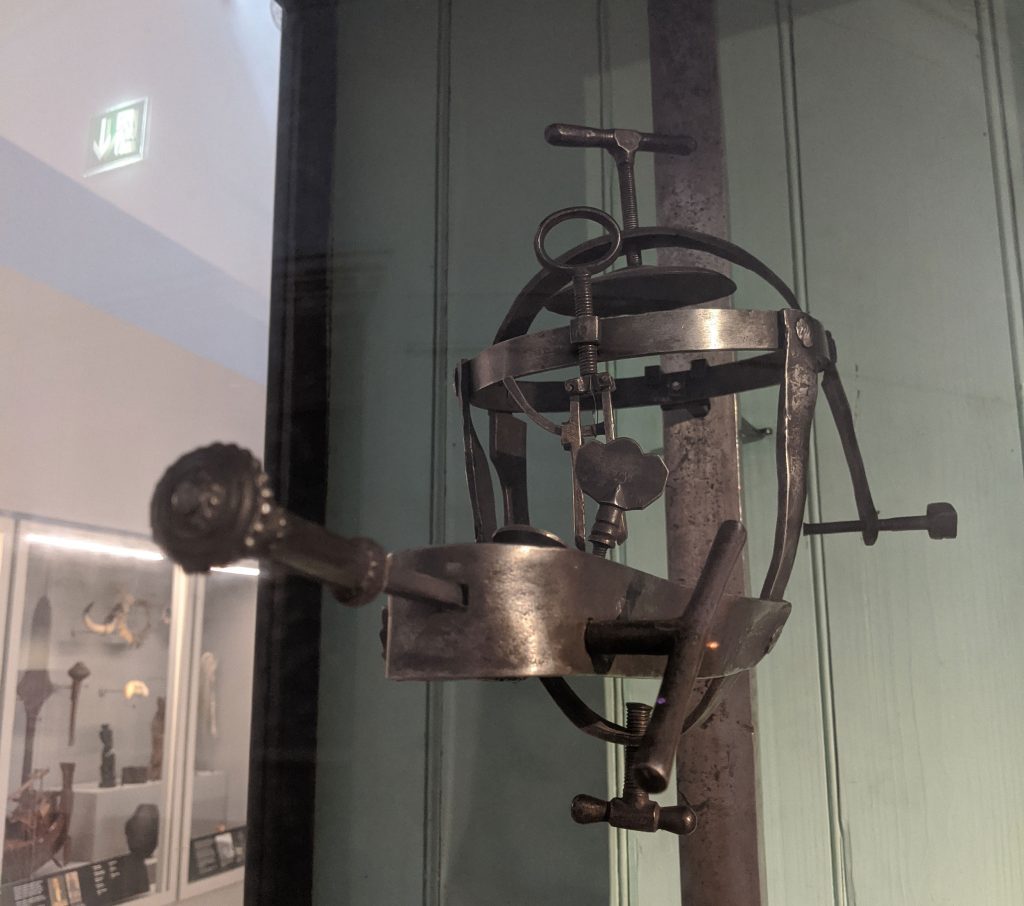 Papier-maché figures like this were created for traditional religious celebrations.

The figure is based on a story from Hindu mythology, in which Kali – the mother goddess and consort of Shiva – kills a monster that was destroying the world. Kali dances on Shiva after he lay down in front of her to calm her down, as her celebratory dance was so frenzied it shook the world.

See it in our World Gallery. These masterpieces of bronze art from Benin City, Nigeria act as a permanent record of the important people and events in the history of the kingdom.

Benin City lies in south-west Nigeria. For over 1,000 years the great palace there has been the seat of the Oba, king of the Edo people, the powerful ruler of the Kingdom of Benin. In 2016 a new Oba, Ewuare II, was crowned after his father joined his ancestors.

Most of the objects you see here were looted by British officers during a violent invasion into Benin City in February 1897. On 7 July 2022 the trustees of the Horniman agreed to transfer ownership of these objects to Nigeria’s National Commission for Museums and Monuments (NCMM).

Since 2019, the Horniman has been in discussion about the future of Nigerian collections held in the Museum with community members, artists and colleagues in Nigeria and the diaspora. Following a request by NCMM in January 2022 for the return of the objects looted in 1897, further consultation and detailed research took place.

The objects that have been identified as looted will remain at the Horniman whilst we work with NCMM on returning them to Nigeria. NCMM have indicated their commitment to a longer-term relationship with the Museum, including agreements to loan items to the Horniman for display and education.

See them in our World Gallery. 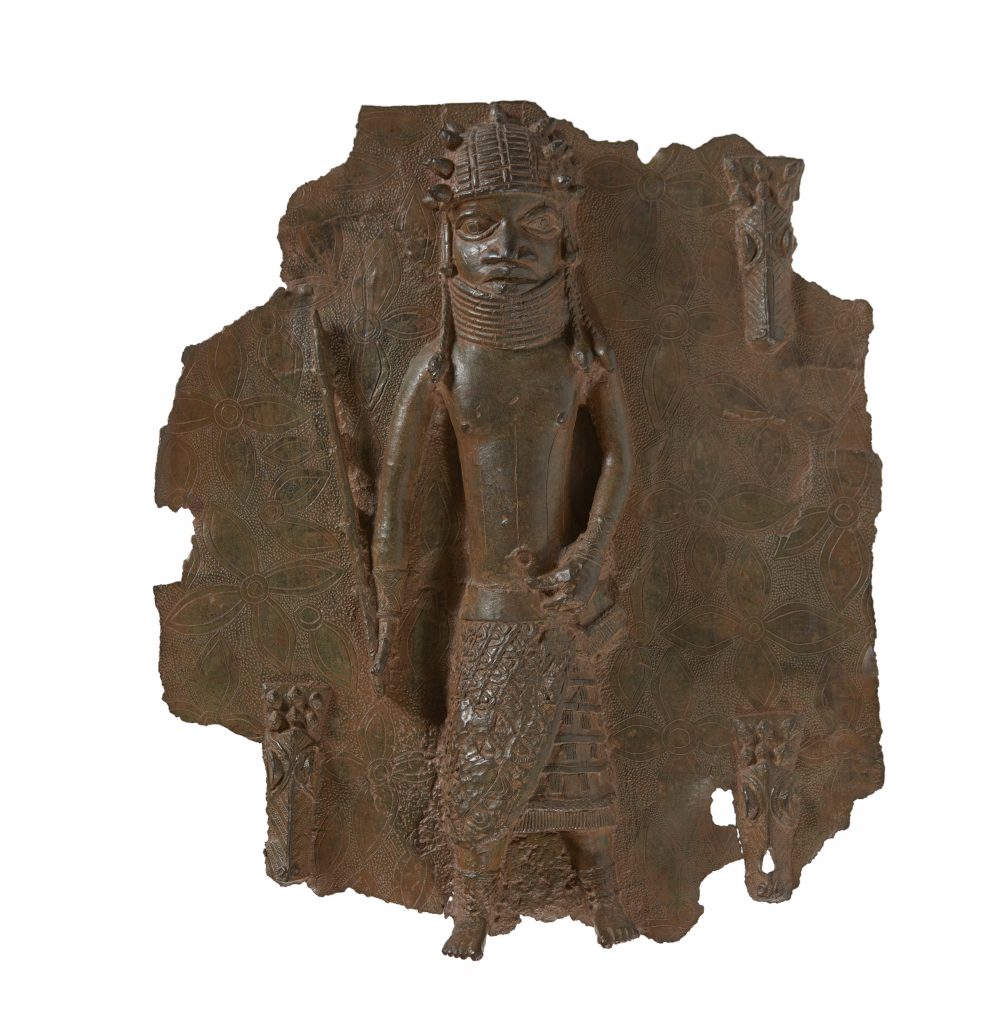 An Oba on a Benin Bronze

The inner coffin lid of an Egyptian mummy from the New Kingdom (1570-1070 BC). This coffin dates to the 21st Dynasty.

Techniques used by the ancient Egyptians for preserving bodies improved over the centuries. Immediately after death, embalmers began to remove the parts of the body that would decompose first. The heart was treated, wrapped and placed in the body cavity since it was the most important organ and believed to be the seat of reason. The other four major organs were preserved and stored separately.

The body was buried in natron, a naturally occurring salt, and packed with temporary stuffing to speed drying, which took about forty days. The body was then prepared with oils and scents. The soft tissues, including brains and eyes, were removed before being replaced with linen, lichen or even sawdust to retain the body’s shape. Finally, the body was bandaged in elaborate linen wrappings, coated with resins and placed in inner and outer wooden coffins. The entire process of mummification took about seventy days.

The coffin was presented to the Horniman in 1896 by the Egypt Exploration Fund in gratitude for a donation of £100 made by Frederick Horniman to Edouard Naville, the French archaeologist in charge of the Fund’s dig at Deir el-Bahri.

See it in Horniman’s Vision upstairs in the World Gallery, on the Balcony. 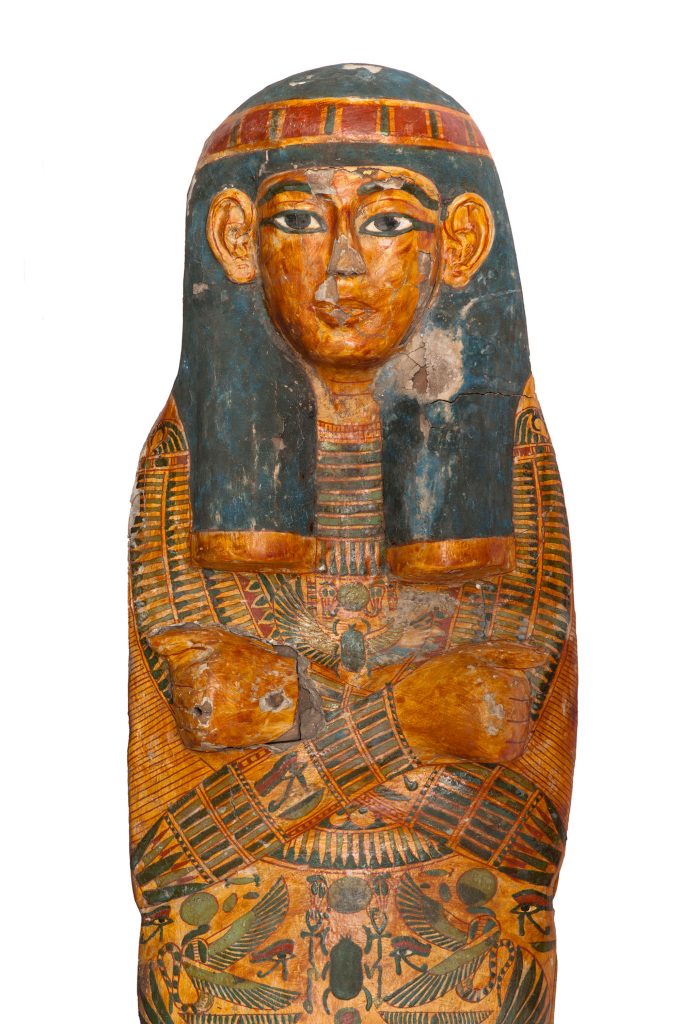 The inner coffin lid of an Egyptian mummy

This clock shows scenes from the life of Jesus. Its name comes from the top part which shows Jesus’ twelve apostles (his followers) passing in front of him, bowing, at 4pm every day.

The clock appears to have been made by a craftsman in the Black Forest, Germany, around the middle of the 19th Century, from a variety of parts and materials.

See it on the Natural History Gallery balcony. 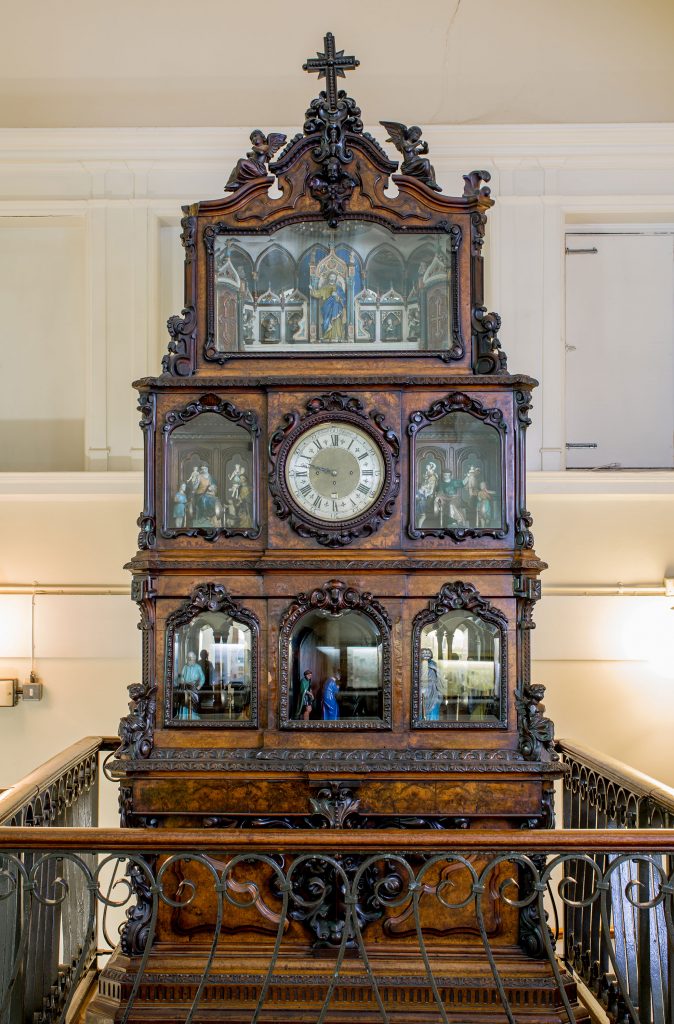 The Apostle clock on the Natural History Balcony, Sophia Spring

Although delicate-looking, jellyfish are extremely well designed for where they live in the open ocean. These predators use thousands of stinging cells on trailing tentacles to stun and kill prey to eat.

We cultivate our own jellyfish in the Aquarium, recreating their various life stages behind the scenes. This forms part of the extensive research work we do with the animals in our collection.

See them in our Aquarium. 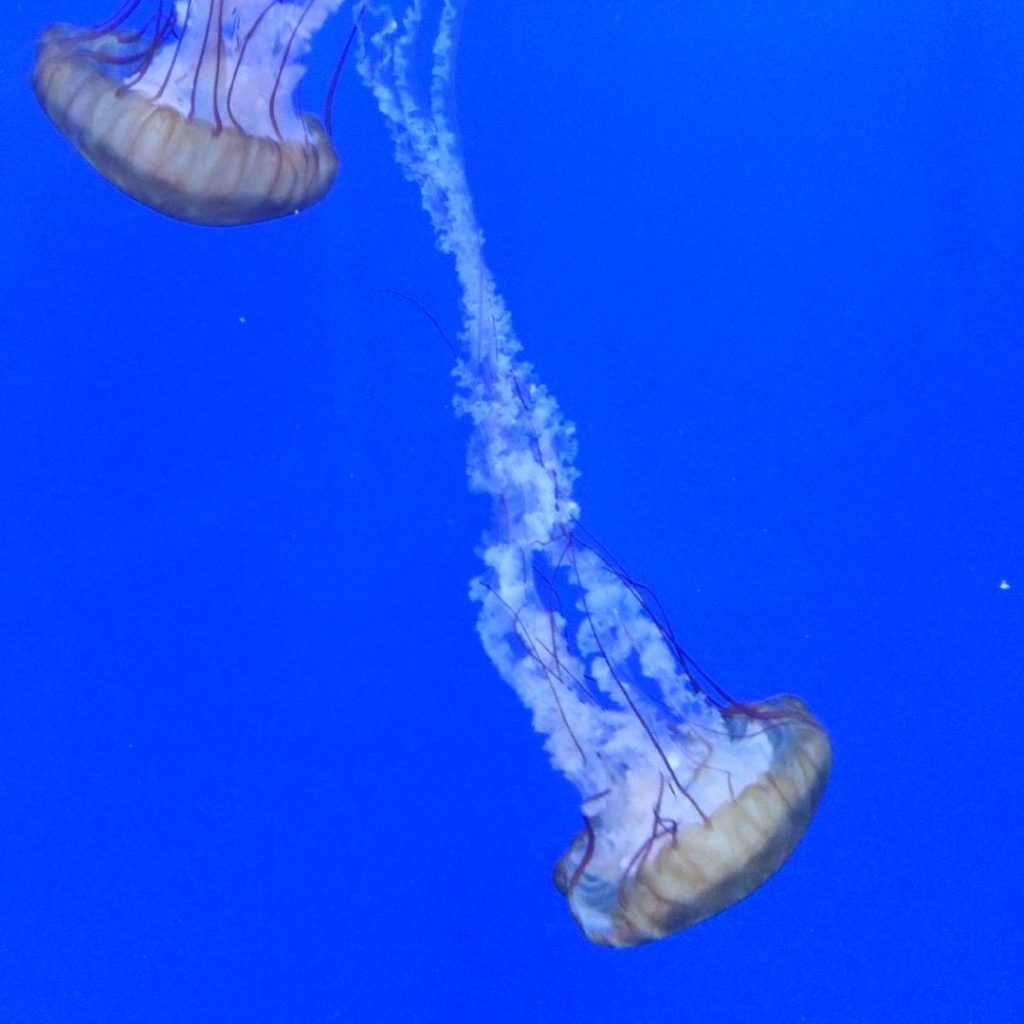 Those who use their eyes obtain the most enjoyment and knowledge. Those who look but do not see, go away no wiser than they came.
Frederick Horniman’s phonograph speech, January 1898

Buy your membership and get free entry to the Aquarium, Butterfly House and our family-friendly exhibition.

By joining as a member, you will not only receive some fantastic benefits, you will also be directly supporting the care of our collections and Gardens. 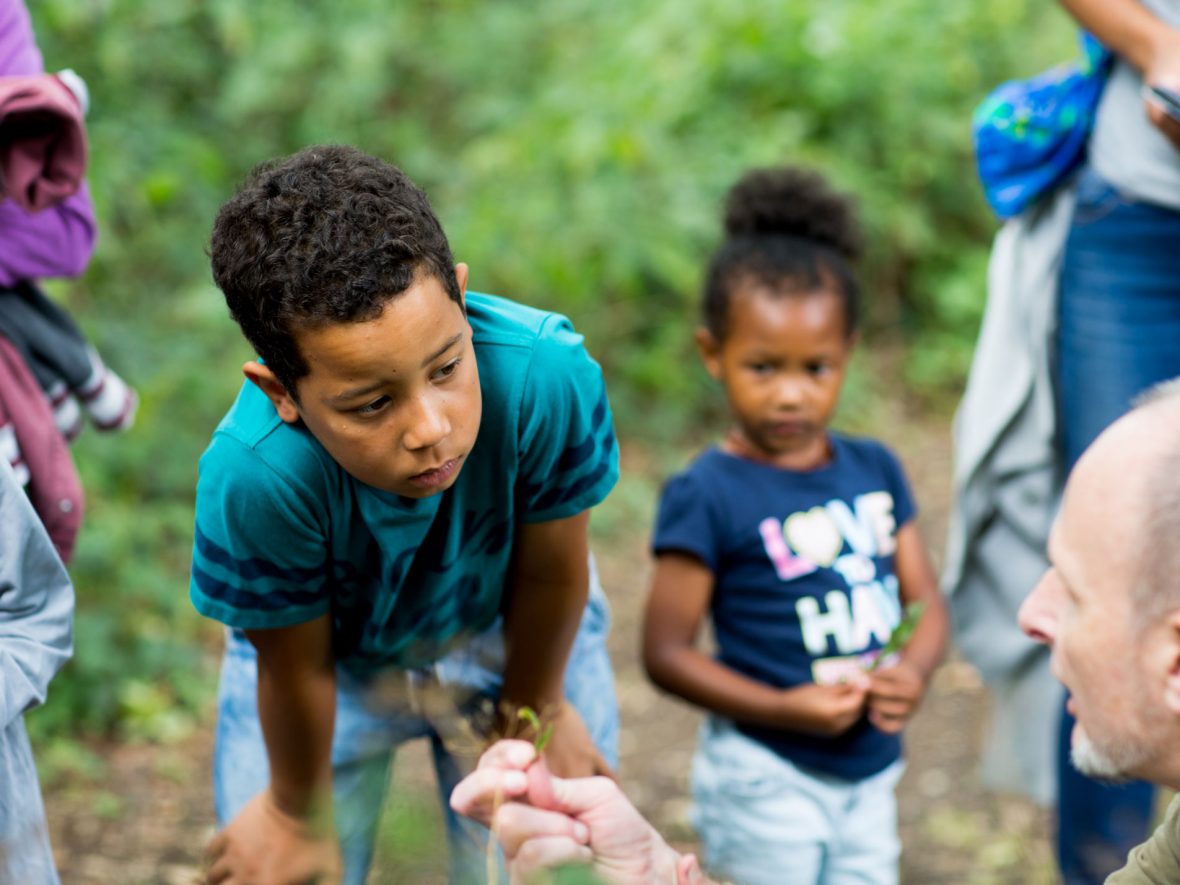 Solar time is a bit different from clock time. We…
Find out more
Walk

Sand Painting, America Made by Fred Stevens in 1966, this incomplete design…
Find out more
About the Horniman