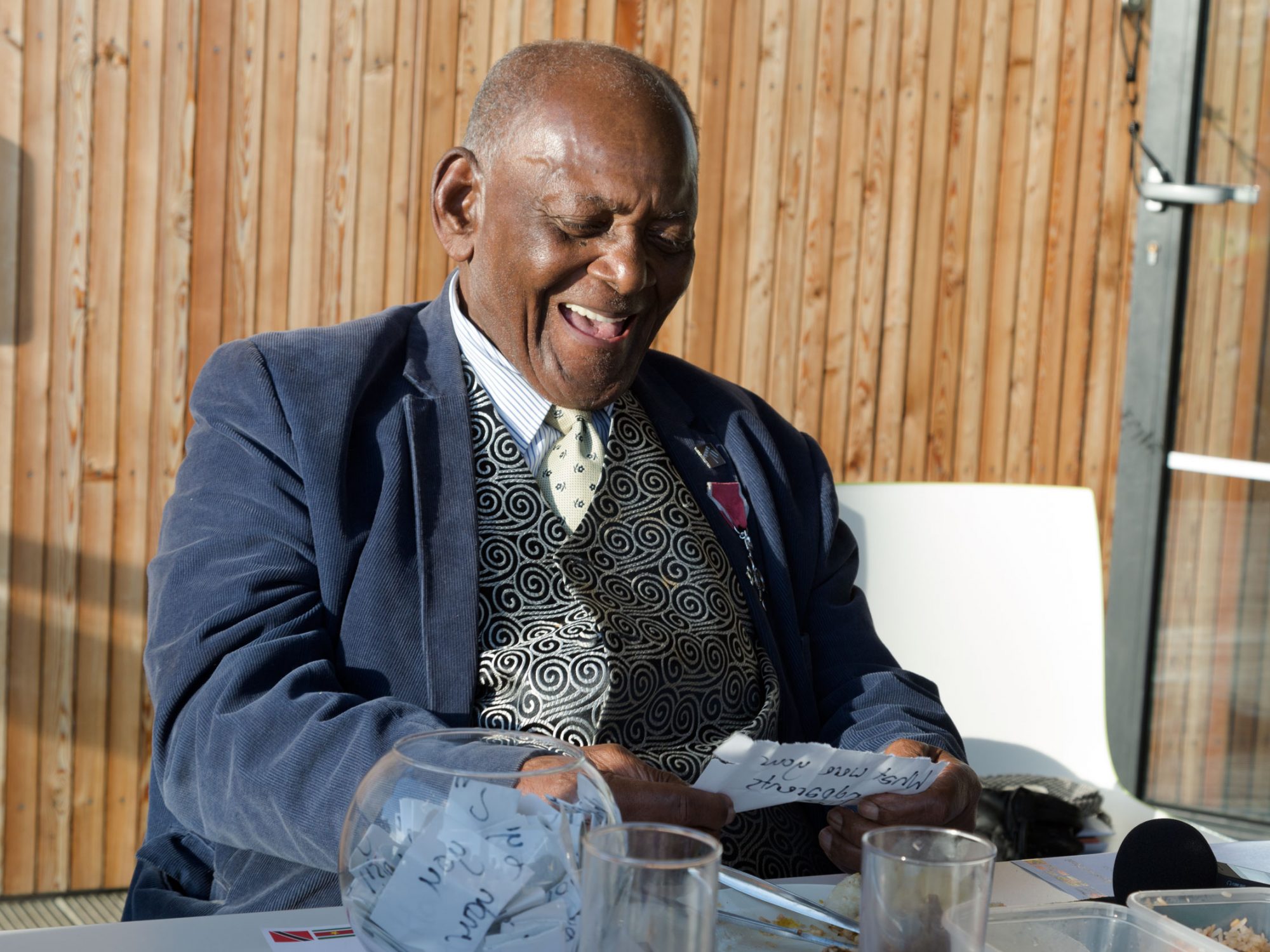 Anthropology Community Windrush
Windrush day is an officially recognised day to celebrate the achievements of that generation. We spoke with Caribbean elders and heard their experiences.

Rachael Minott, Horniman’s Curator of Anthropology (Social Practice), with the help of Shasti Lowton, created a series of events where multiple generations of Caribbeans could gather and share food, stories and advice.

Here, Mr Norman Mitchell, shares his experience and thoughts of the Windrush scandal and memories of coming to England in a moving interview by Shasti Lowton.

What are your early memories of life in England?

When the boat came in [to dock] with us at 5 o’clock in the morning, we were meant to come out but unfortunately, the ferry boat that should take us off the HMS Fairsea wanted to charge us.

Men were determined that they were not going to pay no more money, because we had paid the fare to England. When they see that the men refused to pay, we did not come off until 2 o’clock that day.

We landed in Plymouth and then the train took us from Plymouth to London. We had three trains, one to London, one to Bristol and one to Leeds – there was 300 of us that came on that boat. On the train coming up, we never see house have chimneys, so when I saw all these chimneys on these houses, I say ‘oh my gosh, look how many boiling house!’ Boiling house is where we make sugar, that’s the only thing we see chimney with. So I say ‘what a lot of boiling house they have there’.

When I get home that is when I realise that is the house, true they had the fire and they had the chimney to take away the smoke. That was my experience of coming into London.

I came in on Sunday night, then on Monday I was to go and sign on, and luckily, a friend that was at the house told me to follow him on Tuesday morning where he works and I got there and I got the job.

So yeah, I came in on Sunday night and then by Tuesday I was working! Unfortunately, we were loading a lorry with brick, six of us out there on the lorry, a brick went cross the lorry and hit one of the Irish men in his head. And all of them said it was my brick, they didn’t know which brick but they all said it was mine, so because of that I was dismissed.

Where did you bathe?

It was again difficult finding room because the English people wouldn’t let the black people no rooms, and the Irish.

They used to put a sign on the door saying ‘rooms for let but no dog, no Irish and no black’.

But in the long run, things change and we get through.

So what day did you arrive in England?

And how much did you pay for your boat tickets?

Where did you grow up and what were you like as a child?

I grew up in Jamaica.

I was a very good boy, well for most of my early days. I grew up in church, Sunday school and from Sunday school I make a member of the Pentecostal church.

My days were with church people. I lost my father at age 14, and then I took the responsibility at age 14 to assist my mother in everything that I could to assist her in until I was 27.

What was the best advice you’ve heard?

Well the gentlemen who was at my fathers’ age, they used to come to me and say, ‘Boy you surprised me, I didn’t expect you to stand you to your mother as you do, and because of that I love you’ and all the big men became my friend.

And did they help and support you, and give you advice to look after your mother?

Yes, well my father was a farmer so we needed to see about the farming and see that everything gets in place and in order to move on.

So what is the hardest lesson that you had to learn?

I really do not make things bother me, don’t care how it is difficult, I try to make some way through. And I think that is what helps me that I am able to be here today.

We would say, to make the decision, and leaving home to be in England, in place that you no know no one or the land or what it is about. That’s a very big decision and something that you had to think about and over, because you going to somewhere where you don’t know no one. But I succeed.

What is your favourite family tradition?

Tradition? Well, we was in cooperation in unity. And the family tie was quite good and valuable, we used to counsel and have good consultation to try to sort out things when it becomes difficult.

What are your thoughts on the Windrush scandal?

When I understand what was going on with the Windrush people, it makes me feel a bit distressed because when we came here, it was very difficult.

It was hard because of the snow, because of the frost and because of the cold. We didn’t come from a cold country, so to make it was quite difficult. As I said to my friend, ‘Did you know, God give us a new body?’ Because a lot of us do not think of it; because when we think of it we have sun, ninety-five degrees, seventy-five, eighty degrees, we came here, zero!

It was a great change. The first time I saw the snow falling I didn’t know what it was and I was like, ‘A what dis falling down?’ The foreman that I was working with he called us together and he asked us do we want to go home. And I was so glad because I wanted to go home! Because I don’t know what dis… but it was when I get home that I realised what it was, it was snow! But it did stop.

I get to understand the movements was in those days very difficult. For some of us, nine men used to be in one room. Sometimes they had three beds with one wardrobe or just a bed. You had to put your case underneath bed.

Those were difficult days but we didn’t let those things bother us or trouble us. Well time long gone, thank God. Until today we are enjoying it.

We had a lot of Windrush meetings that have been organised and going on, but one of the things that I would really love to see, is the people were deported, that they bring them back.

Because they struggled in the early years through the snow, rain and cold.

When they should be enjoying a fair life, they were put on a plane and sent back to the West Indies without relatives, without a place to live – that is most difficult and I really think about that and I wish that they could consider it.

Yes, yes, I trust that something better could be done for them.

The Movement of People

Rachael Minott, Anthropology Curator (Social Practice), writes about migration and how the movement of people is represented in the World Gallery.

The Windrush Generation: Experiences of Passing

10am – 5:30pm
Please note: On Monday, 28 November, the World Gallery will close at…
Find out more
About the Horniman